Westworld (Season 4), Episode 3 Recap & Ending Explained: Upon reading this episode’s title, one would get an understanding of which storyline would be in focus. Annees Folles refers to the roaring 20s (the Jazz and Golden age), elements of which are visible in what we had christened Mob World in last week’s ending explainer.

Episode 3 pushed things further and confirmed some more theories. It proved to be tolerable as questions emerged about what had happened rather than the usual speculation. Annees Folles furthered Host-Charlotte’s chilling promise towards the end of ‘Well Enough Alone’.

Such is the power of Westworld, that even an episode without two of the first three names in the opening credits didn’t take away from the impact. Despite Tessa Thompson and Evan Rachel Wood’s absence, the story progressed in a massive way with questions being raised about what’s next. Thandiwe Newton and Jeffrey Wright’s commanding presences ensured audiences didn’t feel the absence of Dolores-Christina and Host-Charlotte. To say that the audience did not notice these absences would be a tad farfetched.

Annees Folles begins with Bernard Lowe finally appearing in Season 4. He awakens as Charlie prods him and then runs out into open land, where he picks up a maze symbol. After he sees a tree burn, Bernard witnesses the aftermath of the Sweetwater massacre, a city destroyed, and then runs into Akecheta in a room at the tower (that looks like the one in Dolores’ New York and the opening credits). It is here that he understands he is in ‘The Sublime’.

The host also gets to know that time in ‘The Sublime’ doesn’t move in a straight line and he can see infinite futures to save “their world.” Unfortunately, he knows he won’t make it unless he chooses one scenario.

We learn that years have passed since Bernard’s last appearance as he is enveloped with a layer of dust. Stubbs is also thanked for keeping everything in order. The duo then embark on their journey to save humanity with Bernard exhibiting creepy prophetic skills at the restaurant, at a laser crossing, and when he identifies hosts.

They then join up with a curly-haired woman (seems like a grown-up Frankie) and journey to the desert to meet the other members of ‘The Cause’.

In another thread, we see Frankie, Uwade, and attempt to head to safety from Caleb’s LA house. Carver takes Bear Bear from Frankie and offers to teach him an advanced kick punch combo. However, when Frankie sees that Bear Bear is dirty and Carver asks what move in response to her questions, the child understands that something is amiss. She remains suspicious about him and then finds Carver’s body. Frankie alerts her mother, who gets a gun to deal with the imposter. After shooting him through the temple, Uwade and Frankie flee into the night.

Meanwhile, Westworld Season 4 Episode 3 heads back to Delos Destinations with Caleb and Maeve. Audiences can see that elements of Sweetwater have made it to the roaring 20s. Right from a host shoulder bumping a visitor to a girl in a blue dress dropping a can and enticing a reveler to pick it up, to the salon setting with prostitutes; everything saw Maeve a step ahead as she had lived that narrative. 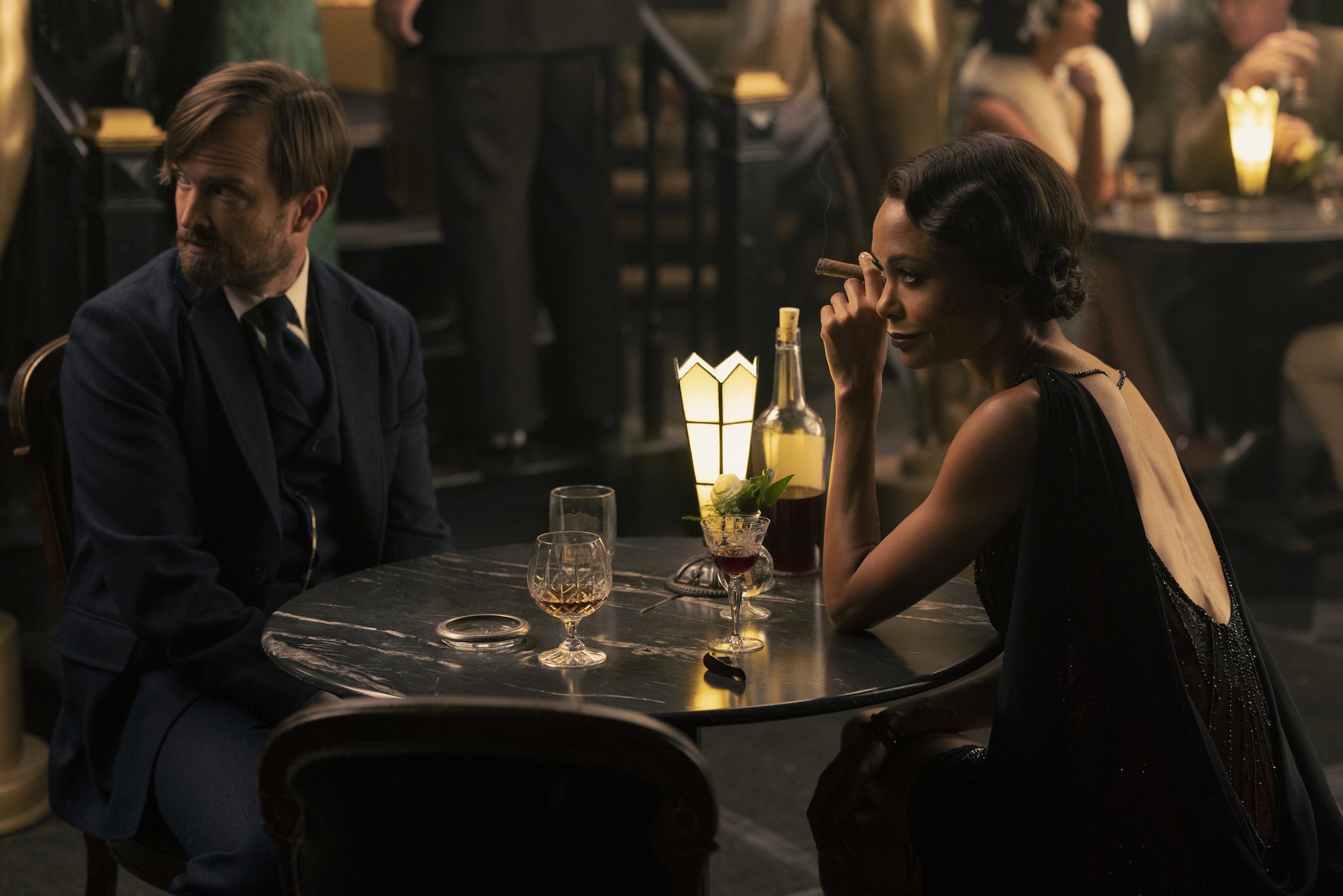 Caleb and Maeve needed to sneak into the control room and knew how to do so with their knowledge of the park. Hector and Armistice returned as 20s mobsters only to get taken down, following which the clean-up crew arrived and offered the duo an opening to achieve their goal. It remained quite surprising as to how two guests were allowed to sneak onto a means of transport for damaged hosts.

When Maeve and Caleb began exploring their surroundings, the audience and the protagonists learned that ‘there’s levels to this game’. Quite literally, as Maeve couldn’t detect control activity and Caleb didn’t get wounded (host bullets don’t penetrate human skin) by Wyatt (a play on Dolores’ invasion of Westworld offices in Season 2). It also explained why the park personnel didn’t take care to ensure no guest boards their transport, as visitors just made it to another level of the park.

After they descended to a lower level, Caleb got a glimpse of the flies’ conditioning program. It featured maggots, goo, and flies. These flies were attracted to him, as he was the sole human on the premises. Maeve heard some music and was drawn into another room where they saw the effects of mind control with each beat acting as a step to control humans. Many screens featured one person in one room as they adjusted blocks, knocked them down, and proceeded to shoot themselves.

As the next set prepared to repeat the sequence, Caleb spotted Frankie and desperately tried to break into the glass cell. Maeve wasn’t able to override the controls until the very last minute. Caleb saved his daughter only to realize that it wasn’t her actual safe. Instead, it was a host programmed by Charlotte to ensure that he dropped his guard.

Host-Frankie held Caleb with an iron grip and revealed itself as one of the original hosts and flies emerged from its face and swarmed into a trapped Caleb.

This episode confirmed the theory that Delos is using the park as a destination to get the flies into the humans/get unwitting test subjects to try the flies out on and further their plans to take over the world. Eagle-eyed viewers wouldn’t have missed out on the fly on screen at The Butterfly Club.

Caleb is under Host-Charlotte’s control as the lord of the flies used one of Robert Ford’s original hosts to infect him with the black goo. The flies entering one haven’t made for good reading in the past with the California senator, his wife, the US Vice President, and the cartel all becoming puppets. It remains to be seen how Caleb overcomes this and how Maeve attempts to help him see the light once more.

But why did Host-Charlotte want Caleb? Per what Host-Frankie said, Charlotte didn’t want Frankie and Uwade, but just Caleb. Perhaps seeing an individual Rehoboam had labeled as dangerous actually be dangerous can show the world that the technology worked?

Maeve’s future remains in doubt as the second Host-William dealt with her. This sequence saw The Host in Black admit ‌he is not a man. It also confirmed the theory of multiple William hosts, as there was no way he got rid of so many bullet wounds so quickly. He knocked her out and could deploy her in the park, or end her (that won’t happen).

Audiences will also have questions regarding the identity of the woman with Bernard. By looks, it seems like an older Frankie; something supported by the dialogues and the way her fleeing from her house and Caleb falling victim to the flies are presented. If this is true, it means that Caleb isn’t saved from his fate and she is motivated to end Delos because of that.

The flies’ mystery and sinister plans of Delos’ progress. But how far are they willing to go? Also, how does all this fit into Dolores-Christina’s world? Host-Charlotte was also absent, but her aura was emanated through the Host in Black and Host-Frankie. These absences in Annees Folles would only serve well, as one would be intrigued by how all those storylines would progress before eventually coming together.

That’s what we have. Until next Sunday (or Monday) ponder over this, engage in analysis, have your say, and freeze all motor functions (that may not work anymore as the hosts are way more advanced).

Where to watch Westworld