What Josiah Saw (2022): Review and Movie Ending Explained: An original Shudder production- What Josiah Saw is a high-concept drama that breaks the traditional tropes of horror to evoke some form of disjointed and absurd fear in the viewers. Be it the odious setting or the almost neo-noir genre, the film will definitely keep you on your toes.

What Josiah Saw is a story of an estranged family- Josiah Graham (father), Miriam Graham (mother), Tommy (youngest son), and the twins May (daughter) and Eli (son). Josiah lives with his mentally unstable son in his farmhouse which is haunted as per the common belief of the town. The mom hung herself on the willow tree on the farm and Tommy hasn’t been able to recover ever since.

The film is divided into three parts in length, narrating a singular story at a time, and later comes together as part of the climax. Let’s deconstruct it one at a time.

Part 1: The Ghost of Willow Road

The film opens with Tommy and Josiah Graham sitting down for a normal dinner except this one had an old-school, pre-meal prayer where Tommy prayed for his mom, and his siblings. Josiah makes it pretty clear that he doesn’t believe in God. That same night, he is woken up to see something terrifying (the viewers can’t see and also why the film is called What Josiah Saw).

The incident apparently changes his mind about God and he tells his son that he was visited by his late wife, who apparently ‘burns in hellfire’ and that they should ‘wash away their sins and make peace with God.’ The old father stops prancing around the house like he did and tells Tommy that they had to right a great wrong to save the wife.

Part 2: Eli and the Gypsies

Next, we meet the second son Eli who lives in an RV on the outskirts of the city. Infamous for sex with a minor, he is on the police radar. To top that, he also has unresolved business with the town gangsters who are at the last straw with his inefficiency to pay up. As a truce, the head gangster offers him a chance to redeem himself by looting the gypsies who visit the town annually.

With no choice, Eli goes ahead with the project and meets the gypsies. He also meets Mama Luna- the fortune teller who predicts his death very soon. She also emphasizes how he is the reason his ‘mother burns’. In a montage of flashbacks, we see some images from the past in a very avant-garde fashion. Immediately after, the gypsies realize that he is after the gold. A fight ensues where Eli emerges victorious unlike the predictions, he rescues a five-year young girl held captive by the gypsies, pays up the gangster, and comes back to the RV to receive a proposal for the sale of their family farmhouse.

In the last part, we are introduced to the third child Mary who is a photographer and also a little psychotic (we get to know them a little later). The opening scene introduces us to her and her husband who are trying to adopt. As per the reports, she has had complications in the past, and she has also gotten sterility surgery. Obsessed with sharp objects (read- a metaphor to suicidal thoughts), she is clearly undergoing depression and is trying to save herself and her marriage by having a baby. She comes back home one day only to find her twin brother Eli waiting for her- he informs her about the property deal and proposes to go back to take care of the business.

So together they arrive at the house with a quick stop at a motel (Please note this).

As we transition into the climax, we realize that there are no scenes with the twins and the father together. But in just the next scene, he tells Tommy that he is angry with the twins because of a grave crime that they committed. Apparently, the mother saw them having sex together years ago and soon after, they found out Mary was pregnant- that was the day Miriam hung herself. And that is the wrong they have to right. 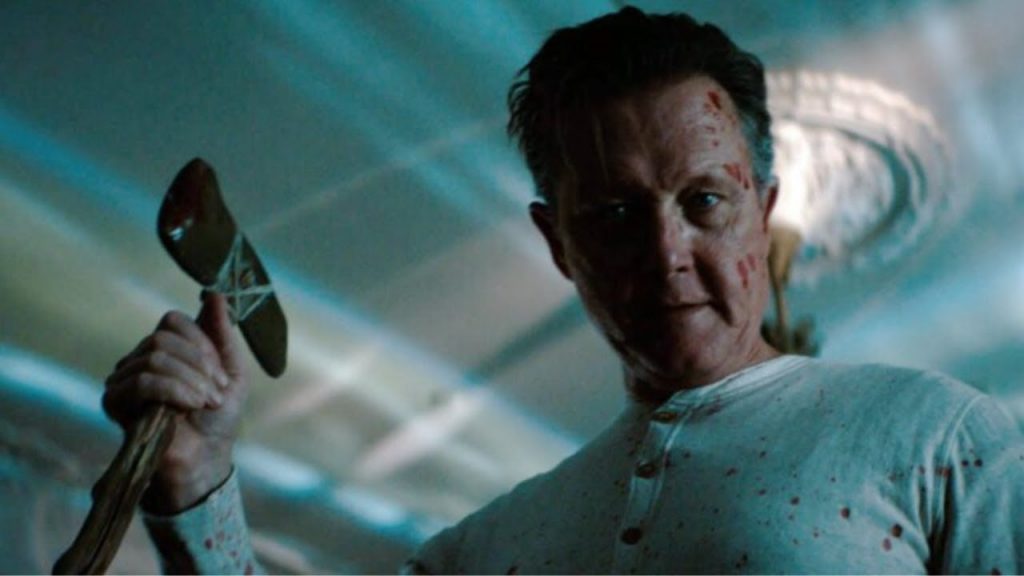 Later, in a dinner table sequence, the twins get suspicious of who Tommy was talking to, and when he says ‘Pa’, they gasp in disbelief- Pa died years ago’, they tell him.

Eureka! Such a Sixth Sense Moment! (Only for a moment though)

Eli and May tell Tommy that the father was cruel to his sons and that he molested May. That’s how she got pregnant (and also how she got trauma for life). Later, when the mother hung herself, the three kids killed the father and that was that. Of course, Tommy refuses to believe it but the father also disappears from the scene as a classic act of what we call cheating the audience. They also tell him that he was married till 2 years ago when the wife decided to separate and take the son away.

Long story short, Eli and May find the skeleton of the baby they killed (grave sin). Tommy rushes to them with an ax and kills Eli in a single motion (as predicted by Mama Luna). And after what seems like a futile struggle and little help from their father- he kills Mary May too. After the climax, the father and son duo sit exhausted in the living room, and the willow tree in the yard catches ‘holy fire’ as a sign of sins repented.

The film had interesting elements like a segmented storyline and a capability to evoke horror without the usual cliched, horrific visuals. It was much removed from the generic plethora of horror films that get made each year and was closed in the category of Hereditary but there was a lot (A LOT) that did not work.

First of all, no one character had an arc. The audience only knew what was told by the dialogues- everything was in the moment (and not in a good way). For instance, the only takeaway from Eli’s story was that he will die soon. And Mary May? We knew she was fucked up in some crazy way. But what then? The characters could have definitely been fleshed out better. Besides, in no two scenes, except the climax, do the filmmakers let the characters share the same screen? So when they finally do, and the shocking climax is revealed, the audience feels cheated and has no ground on what to believe.

While we are on that subject, let me say that I believe that shocking plot twists are interesting to watch (I am a Shyamalan fan) but to do that, the viewers need to be invested in the story. The film is revealed in some lucid delusion and the audience did not have anything to hold on to. Besides, a lot of time is spent on stage setting and irrelevant storytelling which makes for a rushed climax.

After all this tale-telling, any thoughts on what the ending could mean? I will tell you!

Tommy and Josiah did live in the farmhouse, and Josiah was NOT a figment of Tommy’s imagination. Eli and May had fabricated a story in order to declare Tommy a misfit and negate any option of them getting exposed.

What did Josiah See?

Could be anything. A visit from his dead wife with a revelation, a reminder from the past that already lay low in his alcohol-clouded memory, or just a dream to prophesize what actually happened between his two children. What’s important is how he chose to act on it and that is what the film is about.

Several instances in the film back this theory- Mama Luna telling Eli that he is the reason his mother burns, Mary May having PTSD from incestual pregnancy, and the biggest of all the climax scene where the willow tree on the farm burns as a testimony with the carvings, ‘Sins paid in full.’ If that was not enough, the postlude has a scene of Eli and Mary having sex in the motel room where they stopped on the way home.

Where to watch What Josiah Saw

6 Films to watch if you like Purple Hearts on Netflix