7 Star Dinosor Entertainment (2022): The plight of rural migrants in Indian cities came out with utmost nakedness during the pandemic. The whole world saw the unsettling and ultimately true-to-life visuals and news broadcasts of these supposed city-dwellers desperate to leave these giant mouths which they used to feed, with a negligible payment they received to make do. The utter state of unemployment, misery, and a longing to return to the roots was reflected back through precise and heartbreaking visuals.

This misery lies at the heart of Vaishali Naik’s 7 Star Dinosor Entertainment. This is a story so universal and biting that it could have fundamentally taken place in a post-pandemic world as well, in the times when the world keeps tossing trends from one box to another. However, the pandemic gives it a powerful social ring which is hard to deny. Additionally, Naik’s story gives the subtext a sting that is both sharp and sinister. 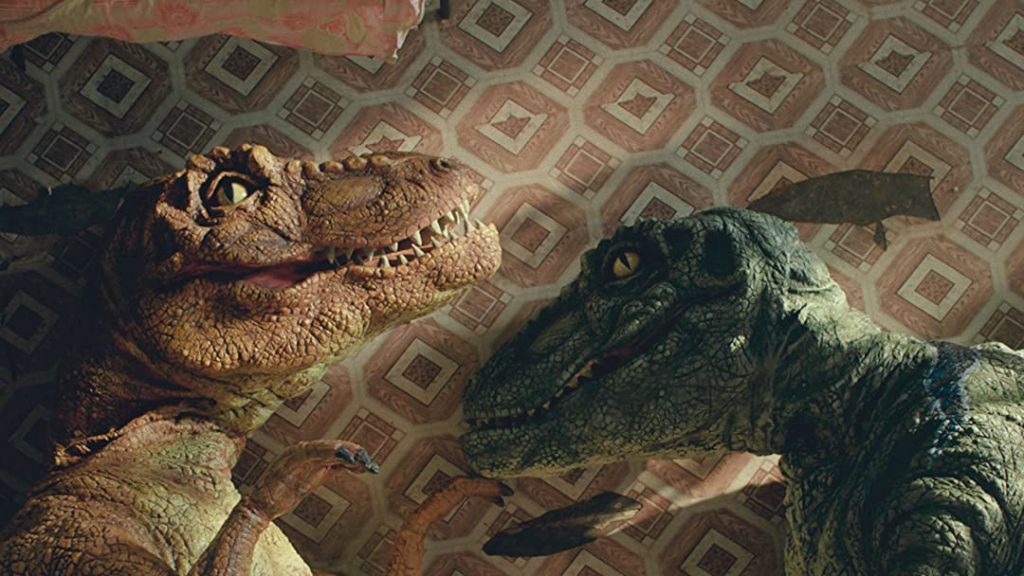 The film follows Sudhir and Vinod, two siblings who have migrated from their village to a big city. They have set up this small business called 7 Star Dinosor Entertainment. The two brothers practice the Dinosaur movements and sounds from the Jurassic Park movies, and don their massive Dinosaur costumes for the amusement of guests at weddings and other functions. One of the videos of them dancing at a wedding gets uploaded on social media and their stint goes viral.

However, everything goes okay only until it doesn’t. The arrival of the virus and the lockdown following the pandemic resulted in the two brothers losing their demand. The public celebrations of the rich come to a halt and so do massive gatherings, which gets them into the throes of perpetual unemployment. The film employs a mockumentary approach to follow their lives and the way they get through the pandemic. The specific focus, nevertheless, remains on how joblessness has influenced their relationship.

The film outlines the complexity of this bond. While the familial need to stick together and figure out ways of survival is what connects them, the same hustle keeps them from warming up. It’s an oddly professional relationship devoid of personality and completely drenched with it at the same time. The dinosaurs, initially appearing to be whimsical props, double up as allegories for the consistent alienation of the specific ‘class’ of humans in the environment which they helped enable.

This is a technically sound film. The cinematography is pointedly simple and the framing in the latter half of the short is extremely powerful, especially the last few shots. The intricate, haunting sound design pulsing tightly in the background of the two dinosaurs dancing in what looks like a forest is a scene that will stay with me. Not just for how impossibly terrific it is, but for how horrifying and ultimately true the context becomes. However, I also wished the film itself was half as beautiful.

While the film operates on a tightly knit narrative with a mostly correct perspective, the pandemic situation still feels like a shoo-in. Naik felt it to be a responsibility to convey it through the lens of our times and make Sudhir and Vinod two men living under the shadow of the virus, but it could have been done without too many cues. It doesn’t help that the performances by Kapil Dev and Rahul Sahu aren’t as terrific as they should have been. For a film the camera of which remains mostly fixated on the physicality of the characters, the acting is too external and needed much more processing.

The biggest disappointment, however, remains the overarching fictional documentary setup. It doesn’t play too well with the approach, and hence, the dark humor that gets revealed in the latter half of the film doesn’t register as powerfully as it should have. The fact that it is short by its very design makes it as negligible in its effect as important as it is as a comment on class conflict, the downfall of the economy, and a very masculine conflict between two brothers.

Overall, 7 Star Dinosor Entertainment is a well-written and tightly-knit social drama with very real conflicts. It also has a terrific last act. However, it isn’t able to successfully sustain its short running time with good performances and engaging dramatic staging.

Lalanna’s Song (2022) Review- A Bewitching, Perplexing Tease Of A Short

Here’s Where to Watch and Stream Daniel Craig’s 'Glass Onion: A Knives Out Mystery' Online