Welcome to Chippendales (Mini-series) Episodes 1 & 2: Somen “Steve” Banerjee’s lustful American dream hanging by the stingy g-strings of six-pack-ab-ed strippers could not possibly see a better revival than Hulu’s sharp new miniseries Welcome To Chippendales. Milking the coked-up 80s this time with a dangerously addictive soundtrack, Robert Siegel is fresh out of Pam & Tommy’s success to sinfully acknowledge the scandalous rise and fall of the world’s first and the biggest male stripping empire created and destroyed by an equally chaotic Mumbai born Bengali entrepreneur. With a near-flawless first two episodes, Welcome to Chippendales indulges itself guilty pleasure style and draws from several real-life stories of glamour-dripping crimes.

Breaking out of his comedic mold we have Kumail Nanjiani as the groundbreaking “no looking back” creator of Chippendales, Somen “Steve” Banerjee. I’ve had my doubts about Nanjiani being cast in such a layered role that requires absolutely specific drives to be communicated as the story progresses into the darker half of Banerjee’s reign. But from the looks of it, the character is in safe hands with Nanjiani completely breaking out of his usual image and manifesting the shortsighted, reckless passion that caused the downfall of the dream-driven entrepreneur. 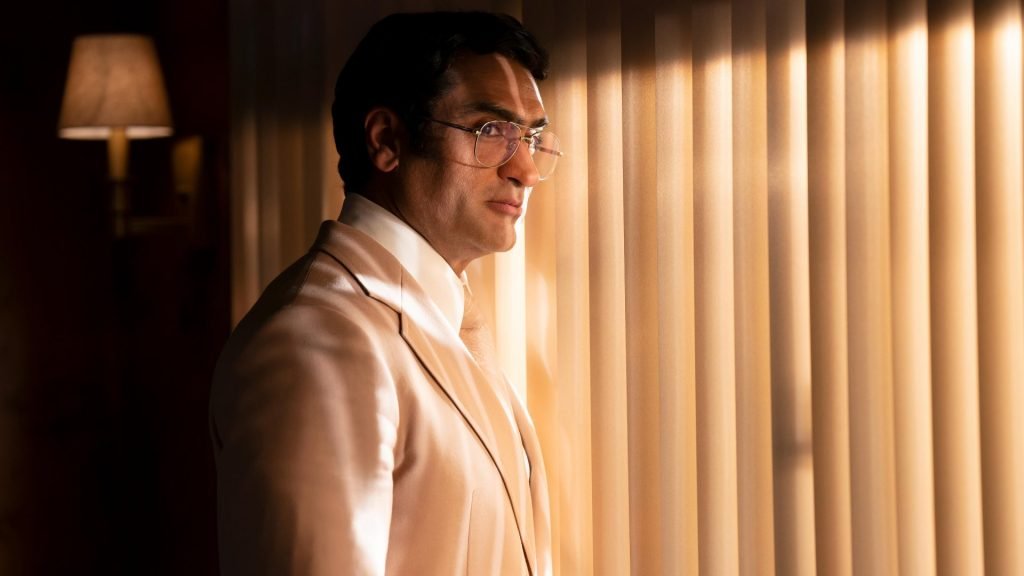 Carrying the echo of his White Lotus Emmy win, Murray Bartlett is a fantastic reflection of the fast-fading 80’s choreographer Nick De Noia. A chance meeting that sets off the steam train of greed and lust on the stage of Banerjee’s “exclusive and elegant” establishment, makes space for functional feminine energy to grab the testosterone-y mayhem by the neck and steer it in the direction of sustainable success. And we now know the origin of breakaway pants thanks to Juliette Lewis’ eccentric Denise.

The pilot touches up and drops a crime bomb with a limited Paul Snider-Dorothy Stratten fiasco. If you don’t already know the fate of the problematic couple, you’re in for a meteoric shock by the time the first episode ends. Dan Stevens’ furious eccentricities will be missed for the rest of the show, but if Murray Bartlett’s lonesome drunk sway in his apartment is any hint, we won’t be feeling a lack of weirdness in the episodes to come.

Impressing and disappointing his gas-station boss at the same time, Indian-born immigrant Somen Banerjee (Nanjiani) pours all his hard-earned savings into starting a classy backgammon club and names it Destiny II. Because if in any way his Indian blood is affecting his American dream, it is by making him believe that the success of his club lies in the sense of previous accomplishments. Bully for Somen who now goes by the name Steve, his club isn’t doing so well. That is until wannabe club promoter Paul Snider (Stevens) walks into the dead space with his Playboy playmate girlfriend Dorothy Stratten (Nicola Peltz) and agrees to liven it up with his celebrity contacts. Not being able to keep up the ruse for too long, Paul loses the quarter ownership of the club that Steve previously agreed to and makes another futile promise.

Paul and Steve go hunting for sexy men and they manage to create a pretty good lineup that draws in a way more thirsty crowd than they imagined. The striptease is taken up a notch in style and sensuality when Emmy winner Nick De Noia (Bartlett) offers his expertise and comes up with a steamy choreography in exchange for $3000. Things are going surprisingly well for Chippendales, especially with Dorothy suggesting the bowtie and cufflinks that will become the signature style Chippendales dancers will be known for. What could’ve been a fascinating life for the sweet girl that did not suffer the lack of career opportunities, soon ends with a ghastly murder-suicide caused by her psychotic husband Paul.

It’s not just Steve’s stoic grim personality that’s off-putting about the stern club owner; he shows unnerving signs of zero empathy throughout. Wasting no time after his business associates, or if I dare say his friends’ deaths, Steve goes straight to De Noia and gives him complete creative control over the club. Now here’s the thing about almost all the main characters. They’re all faking it till they make it. What didn’t work for Paul, works for De Noia who is considerably less bizarre and scary. And Steve’s only goal is the success of Chippendales. He either doesn’t have the time or doesn’t have the ability to crowd his mind with any other thought.

Under De Noia’s ascendance, the entire striper line-up is replaced with his very own handpicked dancers that set fire to the stage. And amongst them is Otis (Quentin Plair), a black dancer satisfying the fantasy stereotype of horny women that grope him every chance they get. The string of successful chance encounters brings Irene into Steve’s path. After dropping a couple of useful money-saving bar tricks, Irene (Annaleigh Ashford) not only gets the accountant position but also starts dating the owner. Steve isn’t at all the goody two shoes that he seems. Looks like he isn’t above lowering himself to wicked publicity tricks to drive more attention toward his establishment.

Otis’ ambitions aren’t limited to his career in dancing. What he hasn’t learned even in business school, he finds in his new boss Steve. He proposes that he should shadow Steve and see him in action, and with a little nudge from Irene, Steve takes him on. Yet another club encounter that starts with Denise hopelessly hitting on De Noia who is clearly gay, opens the path for Chippendales to see even more exciting originality in its future.

Is envy starting to chip away at Chippendales future?

It’s impossible to forget about what the show is leading to. The real face of envy and insecurity, however, doesn’t crawl up with its fanged face until the very last sequence of the second episode. Nick is starting to have a massive hold on the club. It’s not just his flamboyance that does it–Chippendales really wouldn’t have seen its glory days if it wasn’t for his creative interference. But, the cloud of trouble starts darkening the atmosphere when people start thinking that Chippendales belongs to Nick.

That very reason is why Denise (Juliette Lewis) approaches Nick in the first place. And when Nick learns that Denise may have the key ingredient that can take his striptease troupe to another level, he doesn’t think twice before giving her a shot. Denise comes up with the idea of breakaway pants. Yeah, we all gasped. Finally, there will be attires that desperate patrons can easily pull apart. Fascinated with the new creation, Nick suggests that Denise be hired as the club’s fashion consultant full-time. Steve isn’t as impulsive as that. Especially when it’s a decision that would give Nick more power over the club. But Irene manages to convince Steve that Denise would only be a useful addition and a much-needed female presence in the core group.

Nick’s divorce and life as a closeted gay man in the 80s are obviously not all that easy. He has somewhat found a home in the dance troupe if not inappropriate satisfaction in the close quarters of attractive men. And when he sees that Steve has taken Otis under his wing, Nick’s insecurity riles him up. He feels as though Steve is taking away the best dancer in the troupe and therefore meddling with his creative business. But Steve isn’t one to let go of his own goals, especially now that he has control over something that bothers Nick.

Inside Welcome to Chippendales with Kumail Nanjiani

Where to watch Welcome to Chippendales (2022)

The Mysterious Benedict Society (Season 2), Episode 6: Recap & Ending, Explained- Who all are still there to fight Dr. Curtain's evil scheme?