At just 28, Mia Goth is one of the most controversial, mysterious, and accomplished actresses of her generation. The English actress has garnered a reputation for taking on challenging roles in offbeat films detached from a mainstream appeal. Her creative choices are usually stories with a dark heart and central conceit that does not always have the happiest of endings. Goth’s bold portrayals have made her a favorite with filmmakers with experimental styles and slow-burn narratives. The portfolio of films has been extremely well received by critics, at least for their vision and originality. Goth’s performances are described as completely invested character studies and she has been lucky as well to find roles where she can carve her own touch. The list below ranks her life’s work, starting with great to the best performance. So, here are all of Mia Goth’s films ranked. 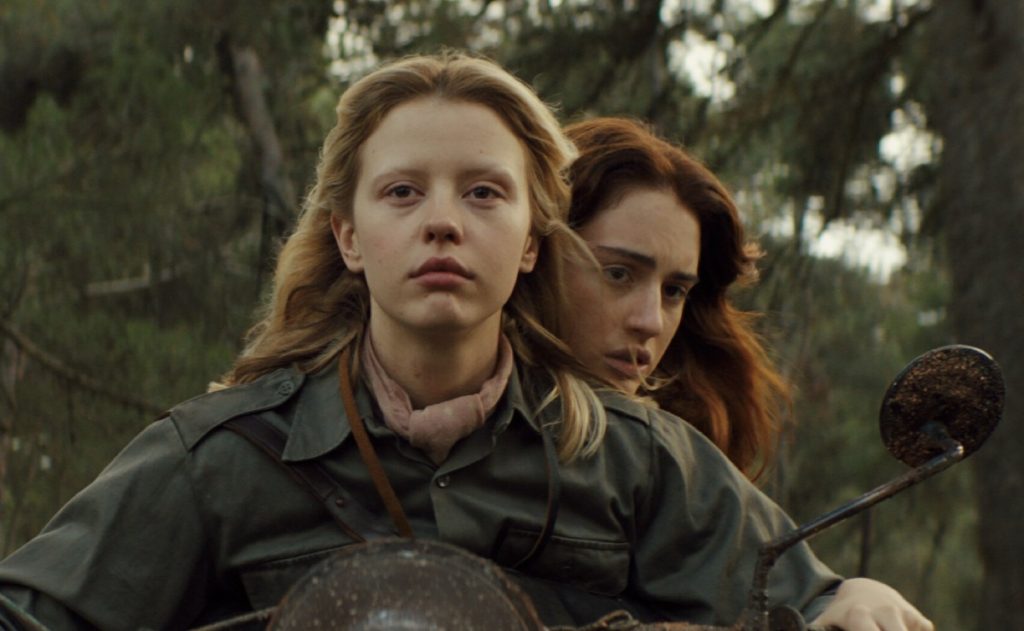 Mayday was an interesting watch with strong feminist troupes that were a bit too raw for general liking. In the experimental setup, Goth plays the leader of the female pack, Marsha. It is again, a complicated character and required a deftness that allowed the viewer to move past the unlikeability. More often than not, the job of actors is to first like their own person. If they can’t relate to him, we can’t either. Mia Goth herself said in an interview that she only takes up roles where she herself likes the character. With Marsha, she touches on those obscure points that we’d usually miss making a sincere case for her. Marsha can easily be misunderstood because of everything she does but Goth craftily finds ways to maneuver those aspects. She rides Marsha’s openness and vengeful side to produce an intense character study. 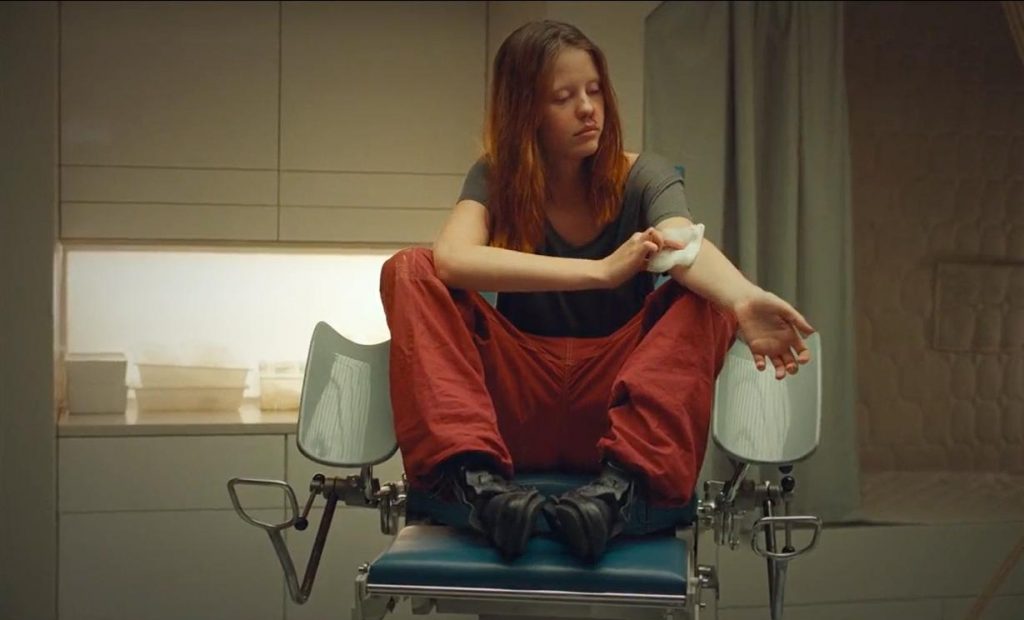 Claire Denis’ obscure sense of characterization and pacing often precludes many from seeing her work. It is admittedly, a little difficult to fall in love with, but when you go, it is as difficult to get out. High Life is a high-octane operatic space drama about survival. It is the most basic human instinct but somehow lost on the crew members of the spaceship as they face the inevitable. The coming to terms with not ever going back comes to a harrowing standstill in High Life, a highlight of the film that is most easily lost in translation from Denis’ vision to our heads. Goth plays Boyse, who features sparingly in the narrative. Her role, like the others, respects a larger idea that Denis wants to confront you with. She is professional in discharging her thespian obligations to give a neat performance. High Life is not an ordinary story set in space, where the setting is only there to bring the story away from dullness. 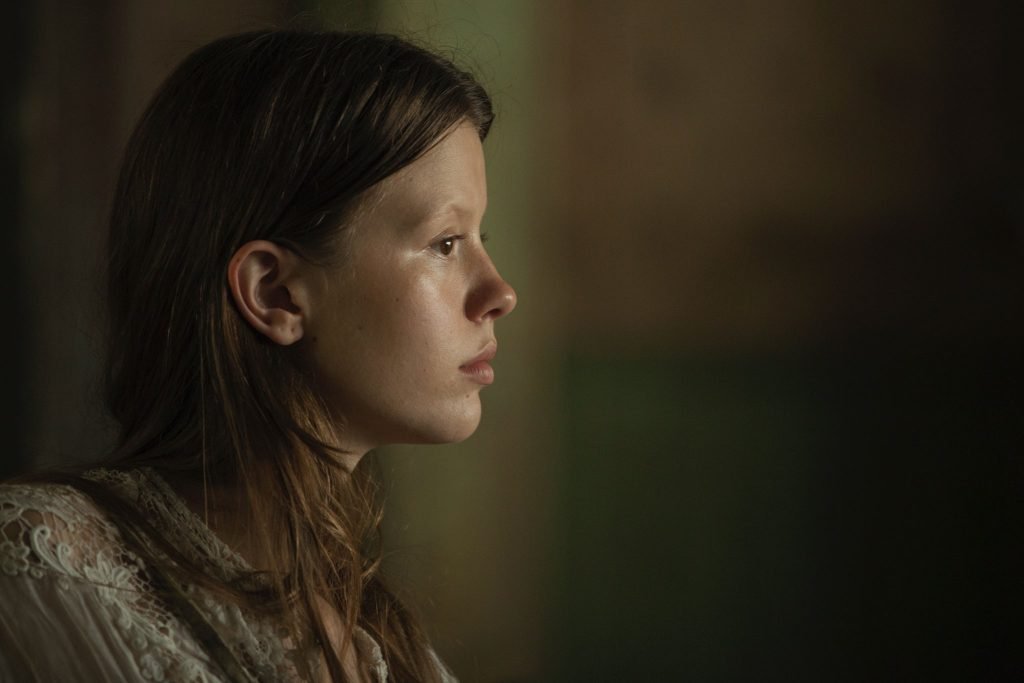 Sergio Sanchez, who helms ‘Marrowbone’, really impresses with his style and the personality he lends to the film’s narrative. Although there was plenty of room for him to make the script a slow burn, he entices you with culturally infused sensibilities that elevate its appeal. The Spanish love affair for carving family dramas within the setup of horror tropes continues with ‘Marrowbone’. Goth plays Jane, one of the four siblings, who are left orphaned by the death of their ailing mother. She and her siblings must then navigate an unwanted and dangerous presence that has followed them across borders and seas. In her truncated role due to the twists and turns in the story, Goth performs in a fractured space, not able to meaningfully develop Jane. She is mostly relegated to the sidelines, only seldom allowed to take the limelight.

But when she does, Goth achingly portrays the damsel in distress. Jane is probably not the most interesting or distinguished character in her portfolio. But Goth still makes the most of her opportunity and capitalizes, especially in the flashbacks, to make an impact. Marrowbone, though, comes up some way short of titillating you with its genre derivativeness, dampening the extremely original story that had plenty of promise. Nymphomaniac being someone’s debut film should have been evidence enough of Goth’s bravery. Acting in a Lars von Trier project is both an honor and unyielding task in itself, let alone doing it for this kind of plot. But that is the thing with great filmmakers; they will push you and polish you to become a better actor. For a debut, Goth’s rollicking turn as “P” is arguably one of the most impressive. And in equal parts, shocking. Nymphomaniac is a film that you must experience for yourself and let go of any pre-biases against the genre. Trier will do his thing; you are the one, as a viewer, who needs to adjust gears and prepare for whatever comes. Just like Goth would have felt satisfied pulling off this role, you would too once you watch it. 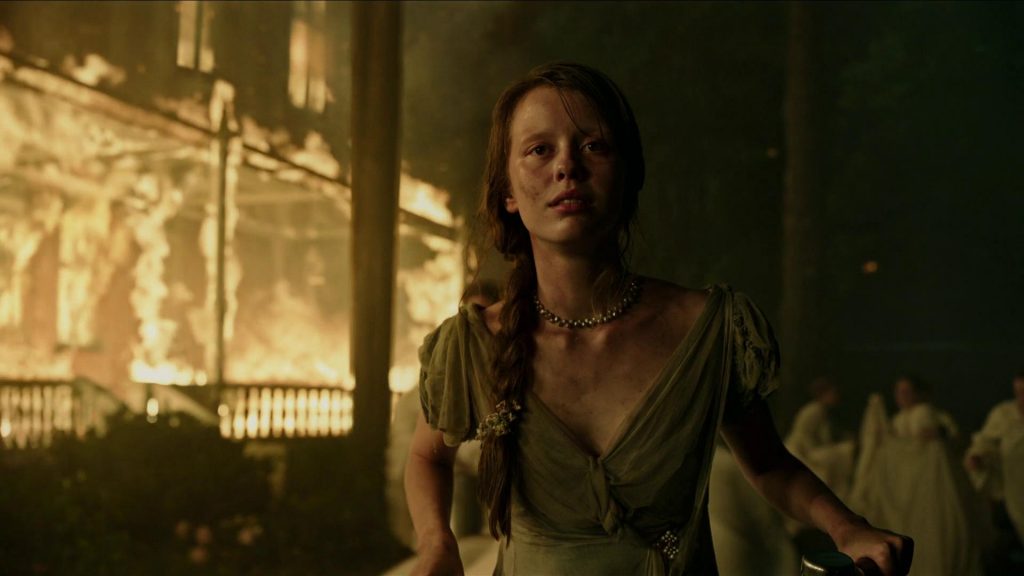 A Cure for Wellness links itself to the strange time of modern-day films when genres are blended seemingly to produce stylish final products without strong plots but high creative value. Under the Skin, Upgrade, and Mother! have ushered in the golden age of sci-fi horrors. Although it is unlikely they will have mass appeals, for the niche audience, they have certainly created a genuine space. The Swiss Alps make for a great, isolated setting for the debauchery to spiral out of control and converge with our protagonist’s difficult task. You probably caught the bathtub full of eels from the trailer and wondered what lies ahead. A Cure for Wellness wastes some of its potential and a great opportunity to finally give us a worthy cinematic adaptation of Thomas Mann’s The Magic Mountain. But one area where it does not disappoint is the acting department.

The three leading members of the cast – DeHaan, Isaacs, and Goth – mount a fighting effort to compensate for the storyline’s predictability. Even with the end seemingly in sight from almost a mile out, you stick to the screen to see it to the end for these brilliant performances. It is well worth watching them emote and act out difficult situations that most definitely fall out of the norm for an everyday thespian. 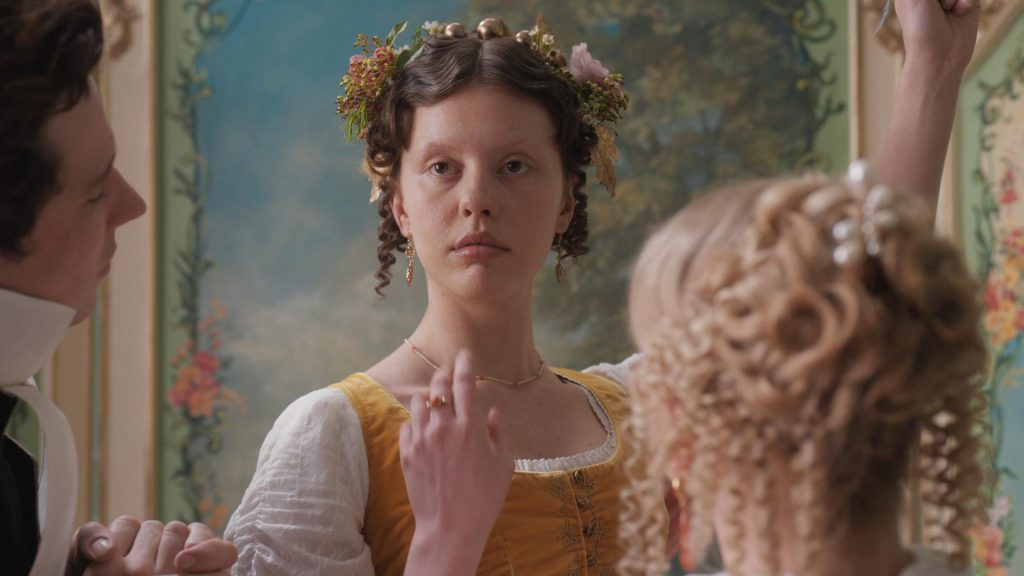 This is the second pairing of Mia with Anna Taylor-Joy and it can be safely said that she upends her on both occasions. The English actress in question is in familiar territory playing Harriet Smith, and for once makes the most of her English heritage. The picture-perfect portrayal is among a similarly placed, exquisite bunch of performances in this exotic period drama. Emma is streaming on Netflix and revolves around the titular character’s attempts to influence others around her at a confusing age in her life. Jane Austen’s subtle world-building in the literary source of the same name finds its way into Autumn Wilde’s rich direction. The talented cast made up of inspiring and rising actors flourishes under the debutant’s able commitment to the story. Joy and Goth are particularly rivaling each other throughout, both as characters and actors.

It is exciting to see such beautiful masters of their crafts compete like this. Although Joy once again became the darling of award shows, Goth brought in enough skin in the game to match her toe to toe. She manifests Harriter’s defiance and strength to carve her own way in life despite the obstacles. The mix of child-like innocence & naivety, and the wonderous adulting & hesitance proves to be a killer one. 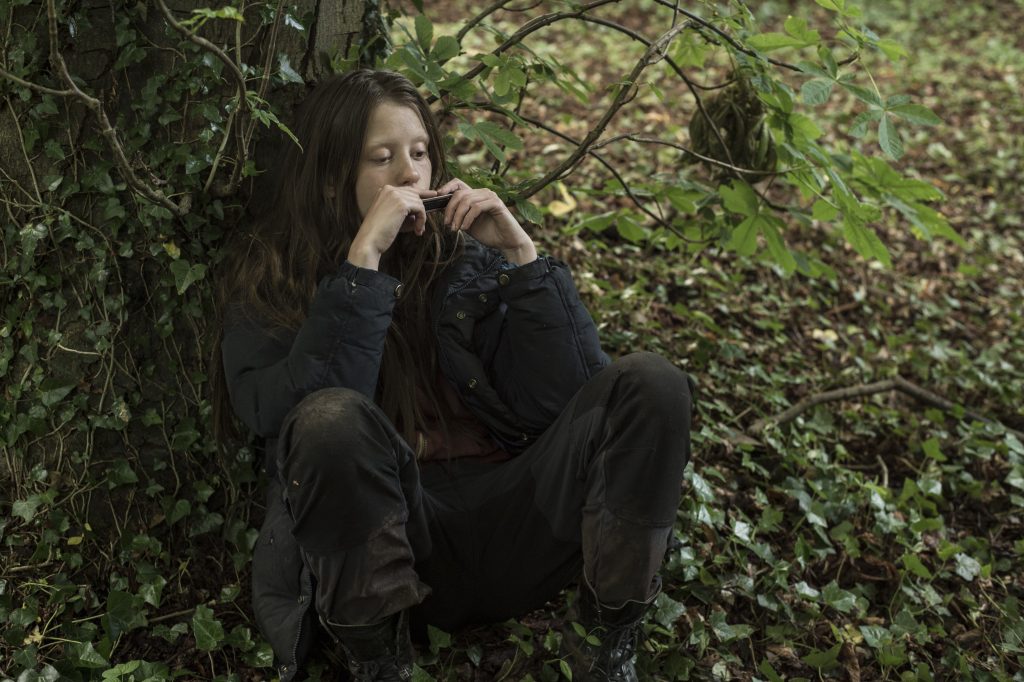 This is one of the hardest films you could watch, even as a purist. Yes, the recency bias means that there will be many more stories that have a harsher tone than The Survivalist. But this is hard enough, purely on the structure of the narrative and its minimalism. With just three characters, director Stephen Fingleton has all the time and effort to extract from his brilliant cast. In fact, the actors share such close quarters during the film, I can’t even imagine how difficult it would have been to shoot it. Goth plays Milja, who along with her mother, arrives at The Survivalist’s cabin, which is one of the only places of shelter in a world where the crisis has turned men to their base instincts. Like most of her characters, Milja is someone we do not often get to see on the screen.

She is scared at first; unsure and insecure. The lack of her positioning in terms of dominance with her mother, an unknown adult man, and a wild world, give Goth to show us a tender side. Story progression means her character’s stature grows and Goth truly imbibes her changed spirit. By the end, we would have seen Goth channel her internal aggression to survive the wild, show her loyal side of trusting the one man she can, and the compassionate eyes of a mother risking it all for her child. ‘X’ took us back to the good old days of 1990s slasher cinema and the 1970s technicolor evolution, with a rural, isolated setting. In such an overdone film trope, filmmaker Ti West carved out a special story with gore and blood that is as tempting as it is unique. His passion project greatly benefited from a fantastic and truly shocking dual performance from Mia Goth. It was only after the end, that many of us would have gone to look for the actress playing Pearl, but without ever expecting Goth’s name to pop up there. She gets the perfect opportunity to play two completely different characters within the same story uniquely related by a strange common thread of beauty and ambition. It is quite surreal to think that Goth will play Pearl once again in the eponymous film releasing this month. If the assessment of the old lady is anything to go by, Goth will cross over Maxine with Pearl’s violent flair. Isn’t that something to be excited about? It is probably best that you navigate Suspiria as a first-time viewer on your own as opposed to me spoiling this delightfully twisted film. Both the original and the remake carry a similar flavor. They both pack a zany punch, strong enough to distill you into its highly acerbic, mystical cinematic universe. The world-building is through the characters and Mia’s Sara is really our guide throughout. We see the story unfold – rather, unravel – through her eyes. If not for her, Luca Guadagnino, the director, would have had trouble relaying the sense of horror that grips the film. Mia’s character has a certain innocence attached to it but really Sara allows her to showcase her terribly wide range. Her performance as everything to sweep you off your feet; so much so, that you’d probably not recognize her as the same person in certain different scenes.

She boldly explores the various shades of her character with immense accessibility that brings you closer to her. It is almost as if you, as a viewer, know her intimately, even before she first appears on the screen. That is a difficult art to master but Mia has this strong ability to harness it with ease. In addition to acting, Mia also nails the dance work, which is the lifeblood of expressionism in Suspiria. Painful, yet beautiful, is how the dance can be described as. Sara’s bravery within the scheme of the story is a winning quality that endears the most. This is perhaps Goth’s most special performance to date; that is, until we see Pearl, releasing this month in cinemas.

I Used To Be Famous (2022) Netflix Review: Formulaic but feel-good nonetheless