Amanda McBaine and Jesse Moss’s intriguing sneak peek into the mock political campaign for 17-year olds in Texas known as Boys State somehow reminded me of The Stanford Prison Experiment and the German thriller The Wave (2008). The Boys State program, however, didn’t originate to explore the darkest aspects of human behavior – the dangerous power trip, fixation for conformity, etc. The intention, for the lack of a better word, is noble. It is to offer the high school youths a first-hand experience about civic engagement, representative democracy, and political leadership. The Boys State program was created by the American Legion program (in the 1930s), a nonprofit organization of U.S. war veterans. Now this detail in itself brings a sort of ideological slant to the program. As one progressive youth in the documentary wonders if this is a camp for ‘conservative indoctrination’, I was hesitant to watch cringe-worthy documentation of the current political morass.

Nevertheless, McBaine & Moss’ Boys State confounded some of my expectations, delivering a more measured portrait of the drama unfolding with the right set of characters chosen for observation. McBaine and Moss have zeroed-in on four high school youths among the 1,100 participants. The narrowing down process might have been laborious, but these four people – hailing from different backgrounds – are our way into this mock political game. The filmmakers mention that the idea to make this documentary came after Trump’s win (in 2016). On one hand, ‘Boys State’ attempts to understand the polarization in American society, while on the other hand it is staged as a microcosm of America’s two-party political system. 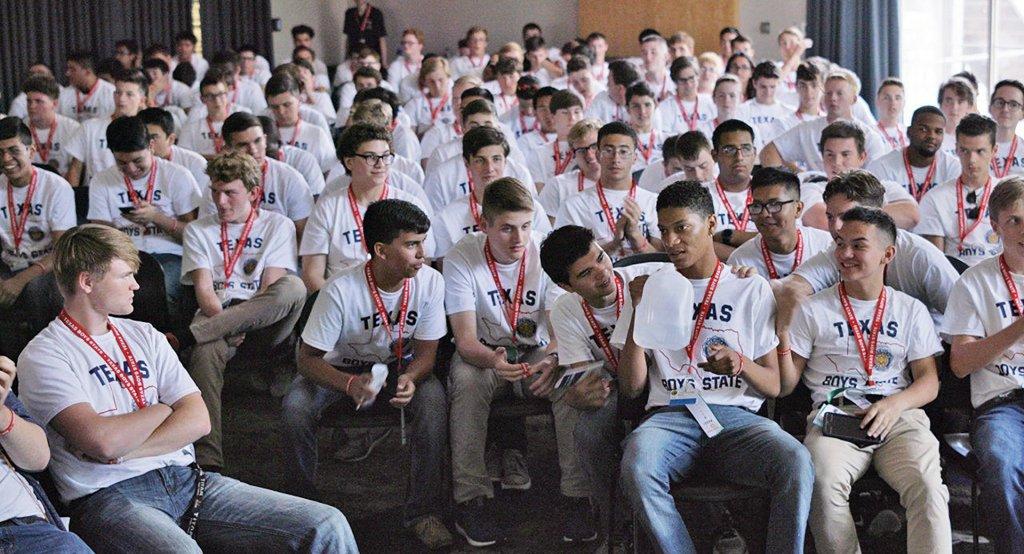 Set in Austin, Texas, the week-long program divides the participants and assigns them to two political parties: Nationalists and Federalists. They have to build their party from scratch, including the policies, and the campaign for Boys State Governor. From electing members to various positions within the party (like party chairman) to selecting Governor Nominee, it’s a near-perfect simulation exercise. There is a Girls State program too. It would be interesting to see how things are done there. But the decision to follow the 2018 Texas Boys State program is largely because of the attention the previous year’s program gained in media. In 2017, Boys State voted that the Texas state should secede from the Union which made national headlines.

Related to Boys State – Weiner [2016]: A Captivating Tale of Self-Destruction

The predominantly white conservative boys of 2018 Boys State do parrot the things we expect from them. There’s the inane attack on abortion, parceled out under the dumb pro-life arguments. One super-privileged white boy yells, “Our masculinity shall not be infringed!” The Second Amendment (right to keep and bear arms) is a significant talking point. Even a little deviation into the talks of gun control is vociferously opposed. So this is the inherently divisive and ugly arena, where the aforementioned four people navigate their way into politics.

‘Boys State’ opens with George Washington’s quote [from his farewell address] that warns about ‘unprincipled men usurping the political party’.  It questions, to what extent the two-party political system has led to the current polarization in America. The weaponization of issues, the sly barnstorming, veiled racism, empty sloganeering and blatant opportunistic politics naturally creeps into the mock government exercise too. The personal attacks and partisan views also gain traction due to the social media drives, just like how the contemporary American political system was messed up by these tools.

Of the four, highly ambitious and double-amputee Ben Feinstein comes across as a ‘fantastic politician’. However, I agree with what one of the participants says about Ben, “fantastic politician is not a compliment”. The passionate and sensitive Steven Garza, raised by an immigrant, hard-working Hispanic parent, is clearly the ray of hope among the bunch. He is the Nationalists’ Governor Candidate who faces challenges thrown at him with a level-headedness that’s very inspiring. Steven looks like a calm, keenly perceptive kid. But the way he rises up to the occasion, canvassing the ‘voters’ and delivering some powerful speeches, was very exciting to watch. There’s an incredible coming-of-age narrative to his arc. African-American Rene Otero is the most charismatic student with an eloquent tongue. These two we seriously hope to remain themselves and find a career in politics. 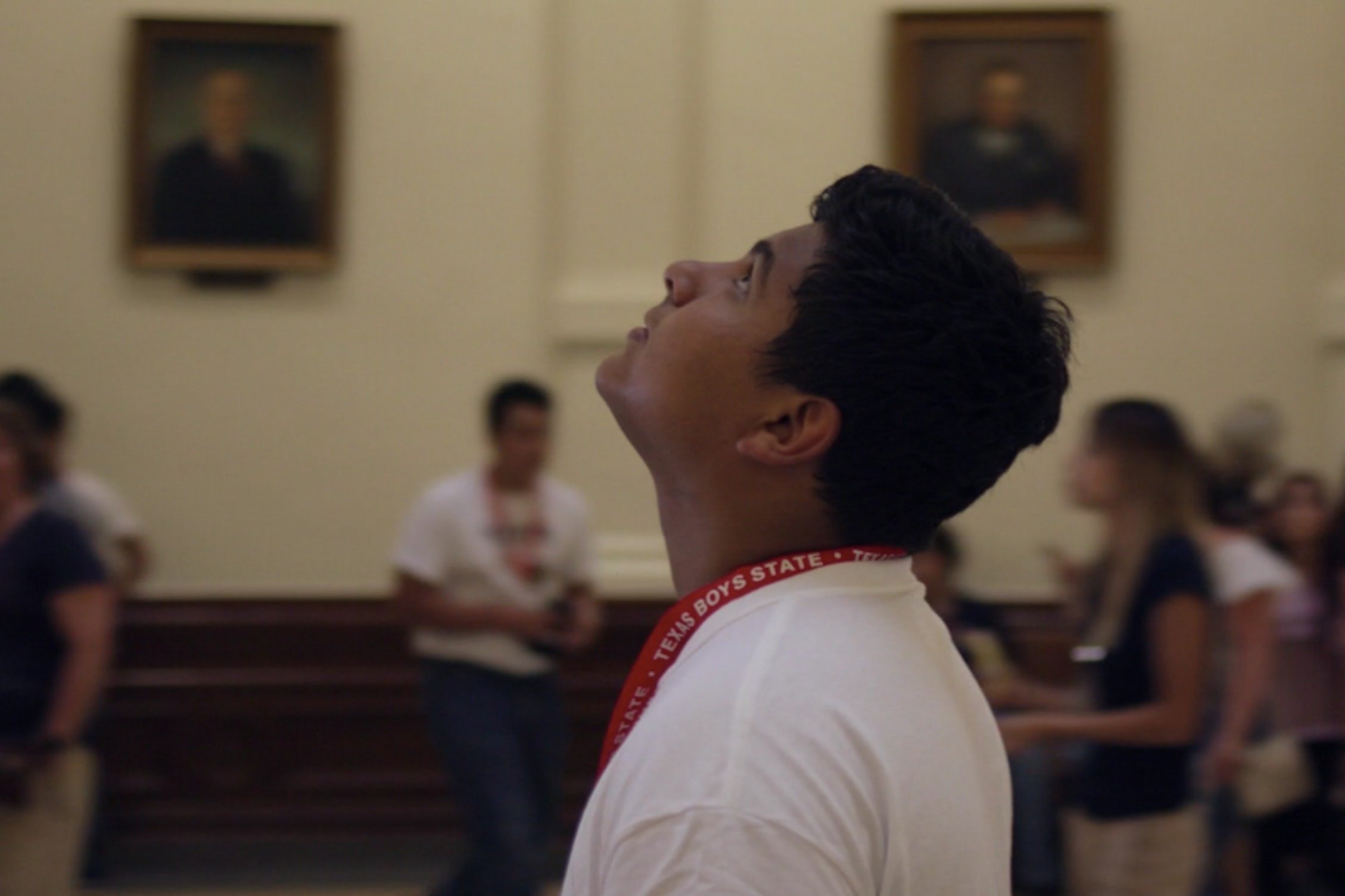 I thought I have seen Robert MacDougall in a movie before. Then it struck me that it was not exactly him, but the archetype he belongs to. The handsome, naive rich white-kid who thinks he can inveigle his way into the highest office. While Steven, a Bernie Sanders supporter, and Rene represent a spectrum of idealism that’s fairly removed from nauseating arch-conservative views, Robert comes across as a matter-of-fact guy. There’s a darkly amusing moment, when Robert after delivering a rousing speech on ‘pro-life’, confesses in a private interview: “My stance on abortion would not line up well with the guys out there, so I chose to pick a new stance. That’s politics…..I think.” Robert is honest in that manner as he eventually attempts to engage beyond the superficial levels of politicking.

The smarmy Ben Feinstein – the party chair of Federalists – seems to be deeply influenced by the prevailing degeneration of political civility. He is very serious about politics, but the kind with ‘anything-for-victory’ mantra. Again, the captivating aspect of Feinstein’s politics is his self-consciousness. He employs dirty tricks knowingly, and sometimes regrets it; certainly not on ethical grounds. While Robert expresses some doubt in his approach, Ben is the end-justifies-the-means boy. Of the four, we may be more judgmental about Ben. Yet despite the discomfort, his presence is very important at the least to understand how vote-bank politics is perceived and shaped by persons emerging from the conservative bubble.

Directors Amanda McBaine and Jesse Moss previously collaborated to make The Overnighters (2014) which is a piercingly devastating examination of the so-called American Dream. Boys State also zeroes-in on the idea of the American Dream, which still drives industrious people like Steven Garza. But on a broader note, as the documentary illustrates, the ‘American Dream’ is more of a buzzword often thrown to find some common ground.  The eventual result of the mock political exercise emphasizes the eroding nature of democracy as the deeply cultivated majoritarian views inexorably evade the larger, real problems.

Overall, Boys State (109 minutes) encapsulates everything that’s wrong with America’s political future without failing to highlight some of the encouraging signs.