Kogonada’s sublime storytelling method knocks off A-B or three-act plot structures. Like Richard Linklater, the director loves to debate on certain cryptic ideas, while at the same time he buries the complex emotions deep beneath the surface in the near-silent sequences.

Columbus [2017]: A Soulful Tribute to Human Connection and Architecture

Form plays an important role than content in Kogonada’s surprisingly great feature-film debut Columbus (2017). Framed in series of unhurried, static shots, the film creates an inscrutable sense of poignancy by just observing the space the characters inhabit or moving through. The film is set in Columbus, Indiana, oft addressed by its nicknames ‘Athens on the Prairie’ or ‘Mecca of Modernist Architecture’. The mid-American town which attracts architecture tourism boasts strip mall finely-attuned to futurism; an all-glass bank with slender pillars contrasting the typical imposing fort-like structures; asymmetrically lined brick columns; a suspension bridge that looks like a giant tent, etc. The place’s architecture brings together two estranged souls whose digressive conversations move through art, history, life and loss. The dramatic element is wafer-thin yet what’s fascinating about Columbus is watching the restrained performances of two actors placed against meticulous shots of uncannily soothing backdrop where thoughts and emotions intermingle in mysterious ways. Similar to last year’s Paterson, Columbus too has an inherent charm to it, eschewing the lesser-important content for a truly sublime experience. 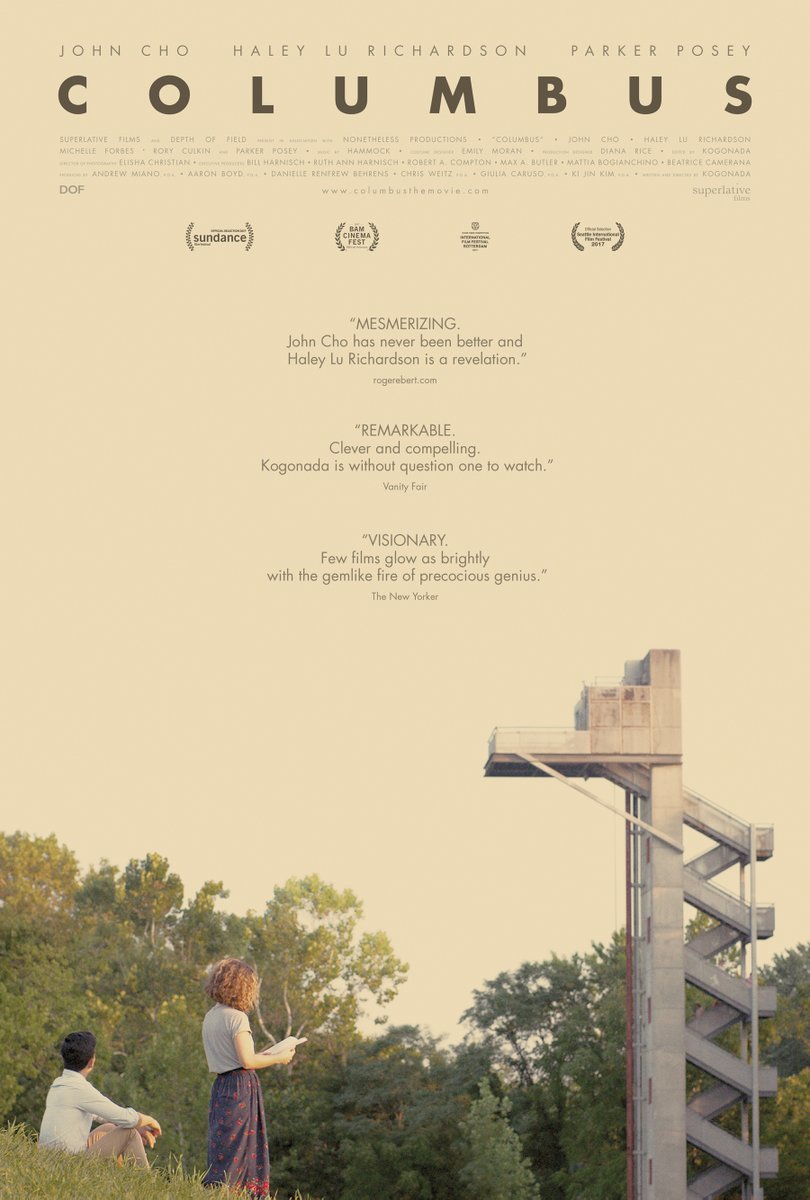 Kogonada is a familiar name for cinephiles whose commissioned video essays for Criterion Collection, BFI and others have provided great clarity on the works of legendary auteurs like Yasujiro Ozu, Ingmar Bergman, Robert Bresson, etc. The video essays are edited with a lyricism, sharply conveying the way the cinematic masters engage ‘form’ (space & time) to entwine profound and indelible emotions into the stories. Kogonada has repeatedly cited that he gained his formal influence from Mr. Ozu. In the interview to ‘Slant Magazine’, the film-maker remarks on his admiration for the Japanese auteur: “I think he [Ozu] mixes feelings with a slow care for the people who inhabit these spaces, so that by the time you’re done watching one of his films, their presence makes you miss them more deeply in their absence. So there’s something very fundamental where he creates enough warmth and connection and humanity that he makes you care about this time that’s passing. He makes you feel sad when it feels like something is ending.” Although Kogonada takes the ‘slow care’ approach of Ozu and his debut film is also about the irredeemable passage of time and displeasure of saying goodbyes, he doesn’t try to simply duplicate Ozu’s form. Columbus is like an expansion of the vision than mere replication or homage [the Korean-born film-maker’s original name is not known; Kogonada is a pseudonym allegedly derived from the name of Japanese screenwriter & long-time collaborator of Ozu, Kogo Noda).

For the nineteen year old Cassandra aka Casey (Haley Lu Richardson), the town’s architecture is a point of interest or obsession. She is a high school graduate who works in the huge redbrick library — the big bookshelves framed like high-rise apartments – and engages in intellectual conversations and half-flirts with her young colleague Gabriel (Rory Culkin). Casey is terrified to leave for college, afraid that her absence would once again push mom (Michelle Forbes) towards the meth-addiction. She waits outside mom’s working place to pick her out at late-night and doesn’t pass any single chance to hang out with her. To soothe her loneliness, Casey [with a cigarette in hand] often reiterates the architectural brilliance of the town like a tour guide or simply gazes at the strange geometry of a strip mall. She’s trying to fill the empty spaces within her through appreciating the space around her. Or maybe, she seeks respite from the chaos and messiness of life in the neatly-aligned structures.

Casey is looking forward to a talk by famous Korean architect/scholar. But the old man has had a stroke and since he isn’t healthy enough his protégé or lover or business manager Eleanor (Parker Posey) calls the son from Seoul, Jin (John Cho). It is evident that Jin, in his 30s, has long had issues with his father and a kind of restlessness afflicts him, until he has a chance meeting with Casey who is smoking near the place Jin stays [this first meeting is interesting in terms of visuals]. Due to the estranged relationship with father, Jin has deliberately avoided his old man’s passion. They light up cigarettes and strike up a conversation which naturally veers towards architecture, and strangely in Casey’s poetic ramblings of the modernist buildings’ aesthetic qualities, Jin finds a much-desired quietude. In the following days, Casey takes Jin to her favorite buildings and subsequently it leads to the personal issues that unnerve them. It’s a beautiful yet an indescribable relationship; it’s unburdened by sex or romance but still emotionally intimate and even turns strangely contentious at times. 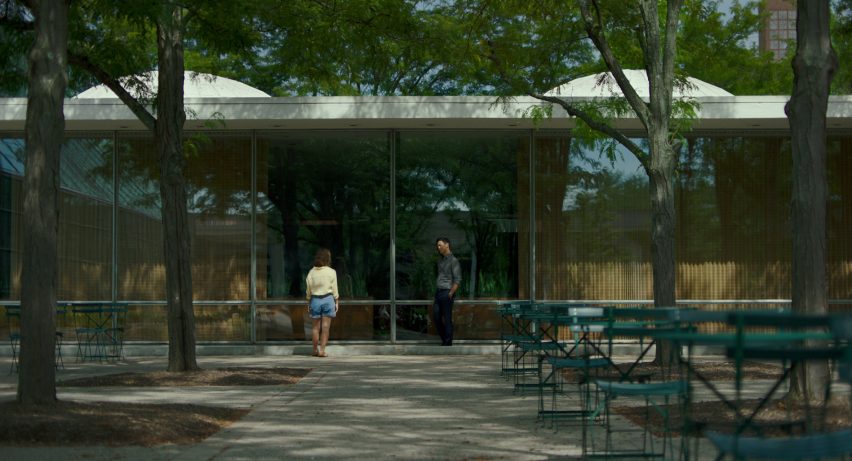 Kogonada’s sublime storytelling method knocks off A-B or three-act plot structures. Like Richard Linklater, the director loves to debate on certain cryptic ideas, while at the same time he buries the complex emotions deep beneath the surface in the near-silent sequences. The attention vs matter of interest exchange between Gabriel and Casey raises good questions about our penchant for consuming art. In relation, the debate could be applied to cinema where there’s a conflict between movies as form of escape from real world and movies as the singular form that takes us deep inside the truths of our reality we otherwise fail to comprehend. Naturally, Kogonada’s film belongs to the second category. Even from narrative perspective, the relationship between Casey and her co-worker Gabriel is interesting. The young guy who precisely conveys intellectual thoughts hopelessly fumbles with words to express his love for her. Furthermore, he retreats within his shell when Casey offers to hang out with him. The question of attention bias and matter of interest kind of underlies their acquaintance. Similarly, an interesting question lies beneath Casey’s embrace of architecture. As an introvert encompassed within painful loneliness, I feel art could sometimes keep our illusions intact, only stimulating the senses to analyze or ponder over the artists’ works. However, art ought to be a bridge that connects our restless soul to the world or reality, instill sensitivity or sharpen our consciousness. Casey’s friendship with Jin is all about how she transforms her love for art into something truly enlivening or tangible. There’s a beautiful scene when Casey verbalizes her love for a particular building parroting words from guidebook. Jin stops her and asks to tell why the structure deeply resonates with her. In the next shot, Casey is giving some heart-felt lecture on the building but its inaudible [We only see Casey in long-shots and glass reflections until she opens up ‘what moves her’ about the building]. It’s amazing how we don’t hear her reasons yet feel that we have seen some deeply buried emotional side of Casey.

Writer/director and editor Kogonada’s storytelling approach mostly follows the aforementioned method. He keeps the information to the minimum, unexpectedly cuts from a scene without overplaying the emotions, and most importantly he invests silent moments and simple gestures with great depth [couple of moments that stayed with my mind are when gloomy-faced Casey suddenly lights up and waves to a little girl playing opposite to her yard; and when she frantically dances in front of the car to suppress the painful emotions]. Even though the platonic relationship between the two discontented souls is an overly familiar element, the casting is pitch-perfect to cast off any familiarity. John Cho of Harold & Kumar and Star Trek fame magnificently embodies the characters’ reserve and gracefully yields spotlight to his co-star. Haley Lu Richardson (‘The Edge of Seventeen’ and ‘Split’) does wonders in what probably might be her first huge role. As a curious girl with a penchant for real human connection, Haley convincingly switches between her character’s cheery and frustrated nature. Ultimately, the magic in their acting or chemistry together lies in how they use their physicality or earnest glances to depict emotions that render dialogues simply meaningless. Combined with breath-taking utopian surroundings and the director’s impeccable formalism, the two likable pair persistently provides an unforgettably soothing movie experience.

The video-essayist-turned-film-maker Kogonada’s Columbus (100 minutes) takes an austere story-line and loads it with a bewitching film-form that turns spaces and elegant backdrops into deeply expressive elements. It may not seem much initially, but it retains the warmth and staying power oft experienced in the works of Hirokazu Kore-eda, Jim Jarmusch, and of course Yasujiro Ozu.