Ghostbox Cowboy [2018]:  A meandering collision of East and West frailties

John Maringouin brings a partly comic and partly melancholic tale of a lost cowboy in his debut feature film, Ghostbox Cowboy. The premise of the movie involves an interesting phase in the creation of counter-cultures and trans-national relations in the 21st century. Jimmy Van Horn is a worn-out entrepreneur who lands up in China seeking a new beginning. His ‘Ghoster’ trans-communication machine allows contact with the deceased and is picked up by Chinese investors. The optimism soon breathes its last as Jimmy’s grand plans for a bright future vanish in the gerbil-covered home of the world’s most successful communist party.

Maringouin previously made the rounds with his documentaries ‘Running Stumbled’ and ‘Big River Man’. His experience with the docu-style camera setup is abundantly visible in the way he sets up ‘Ghostbox Cowboy’. Right from the start, Maringouin uses uncomfortable close-ups and vibrant, silent imagery that combusts steadily with submissive, inviting beats almost tempting the viewer to jump ship with this Woody Harrelson-look alike cowboy. The narrative absolves itself of a definitive timeline, making sure that close details are paid due attention. The non-linear presentation empowers the film’s atmospheric and immersive universe, in contrasting fashion to Tarantino’s explosive brand of cinema. Maringouin compliments the fragile state of the story with the use of handheld cameras, capturing every inhalation and exhalation of the modernizing city going through phases of decay and consuming all that lies at its threshold of importance. The ambitious camerawork is drawn with a mildly vivid and conservative color palette that is dominated by neon and red. 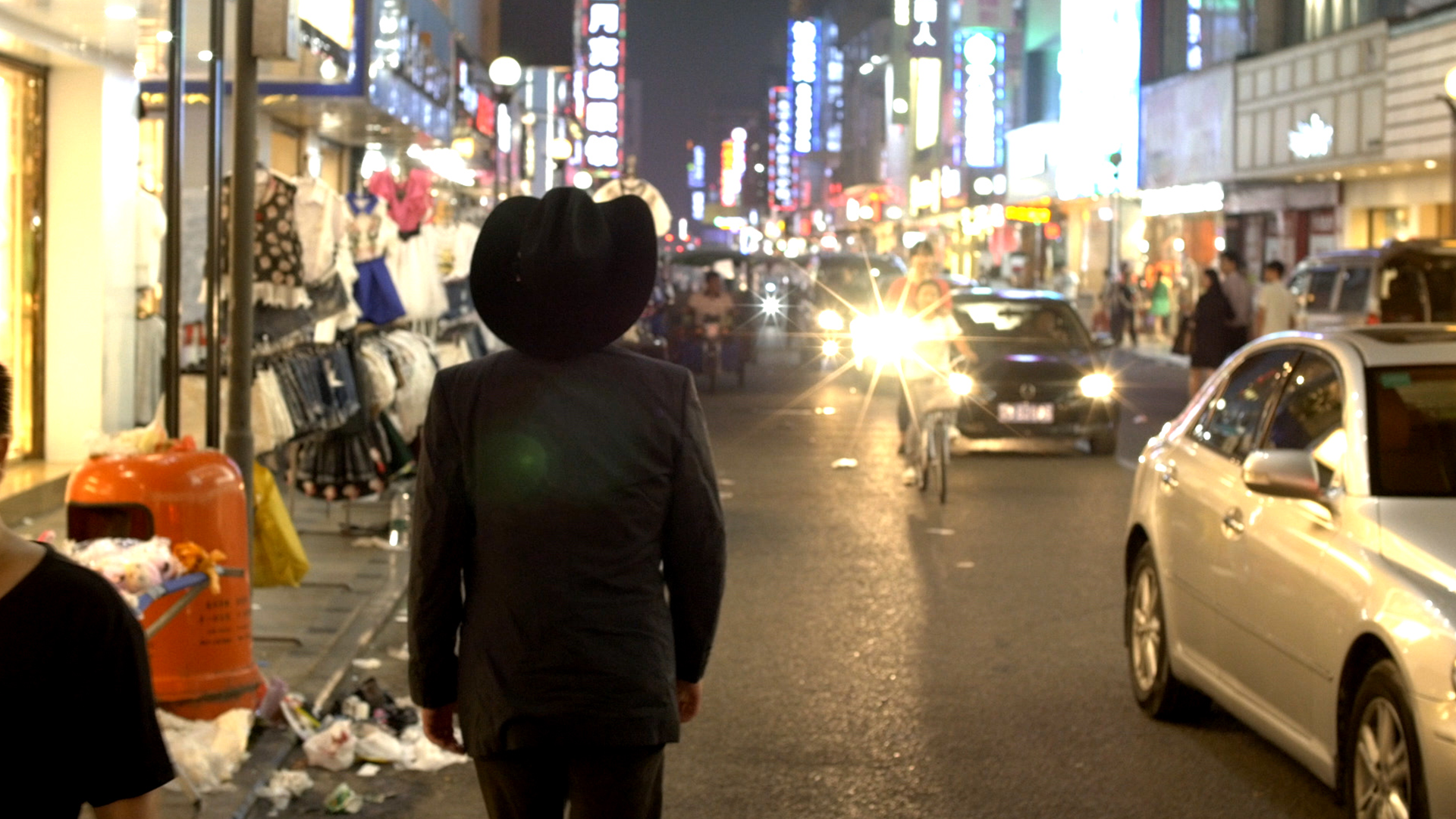 While the film certainly charts Jimmy’s journey into a world of deception and betrayal, it is also an extensive social commentary of the colliding Eastern and Western cultures and beliefs to give birth to a counter-culture that is dangerously isolating. A recurring motif throughout the film is the presence of adverts in the frame which start taking an important position as the movie progresses. They become a dominant element with the receding importance of other subjects in the frame and dislodge them to take charge. The film respires through brief periods of cut-ins and fades that tweaks the divisive air of hopelessness from the story. The earnest performances from a largely non-actor cast gauge the viewer’s attention and put around them a disarming hold which makes the experience a surreal one.

One of the film’s underlying themes is the palpable air of loneliness that clutches the characters with submission and obedience. Whenever a new character is introduced, Maringouin uses a wide lens and relinquishes their individuality against an expansive and overbearing background. With the use of wigs and discernable disguises, Maringouin instills in the story a lost sense of identity and draws their credibility and madness against an unyielding and principally indifferent city. Voiceovers and interview-style conversations release the viewer of its habitual duty to asses a complex juxtaposition of images and sound and instead emancipates them to engage with the morbid, hallucinatory imagery. The film becomes accessible with its “betrayal season” that sees Jimmy cut out of his own deal by a much smarter, conniving pair 0f Vincent and the Specialist. Jimmy’s abandonment by Bob, who also robbed him of his saved Bitcoins, is an allegorical and much-documented depiction of how the modern society leaves no spaces for innocence and trust to foster. Alternatively, it is the charming and alluring conman who emerges triumphant, leaving the helpless and gullible lamb out on the street.