Have you come across a bad and utterly unoriginal movie that at some point you stop following the shenanigans on-screen, and you start wondering what led to this movie’s existence? These are what we call as ‘so-bad-it’s-good’. Of course, you know that I am not talking about the average Hollywood studio fuckup, but something like Ed Wood’s Plan 9 (1959) or Tommy Wiseau’s The Room (2003). Michael D. Olmos’ Green Ghost and Masters of the Stone (2022) is one such silly generic fare that sort of fits the bill. In fact, it tickles your funny bones the most when it is trying to be very earnest. You’d even start feeling that the (badly performing) actors or the technicians involved are giving their maximum to not loudly laugh during filming.

What makes these so-bad-it’s-good movies interesting is the fact that it is somehow a labor of love. In the case of Green Ghost, I think there’s some ego involved too. But more on that later. In this Texas-shot cosmos-saving super-hero action-comedy, there is an overt political commentary of sorts. A middle-aged and idiotic white guy depends on a lot of Mexicans to regain his superpowers and fight the conventionally campy power-mad villains. Actually, the middle-aged white guy is supposed to be young. But since Green Ghost and Masters of the Stone is funded by that guy, we are asked to believe that he is young. On hindsight, that’s not a tough ask, compared to the other things thrown up by the narrative.

Charlie Clark, a real-life wealthy car dealer from Brownsville, Texas is playing a fictional version of himself. The fictional Charlie Clark also moonlights as an underground wrestler. His identity in the Lucha libre (Mexican wrestling) circle is Green Ghost. If your idea of comedy involves butt crack and spandex, you can laugh out loud when Charlie makes his appearance in the costume. The writers might be clever in naming the masked figure Green Ghost as if anticipating us to mispronounce it as ‘green goo’.  Charlie doesn’t fight in the ring though. He leaves that to his Mexican brother Marco (Kuno Becker), who fights pretty well. 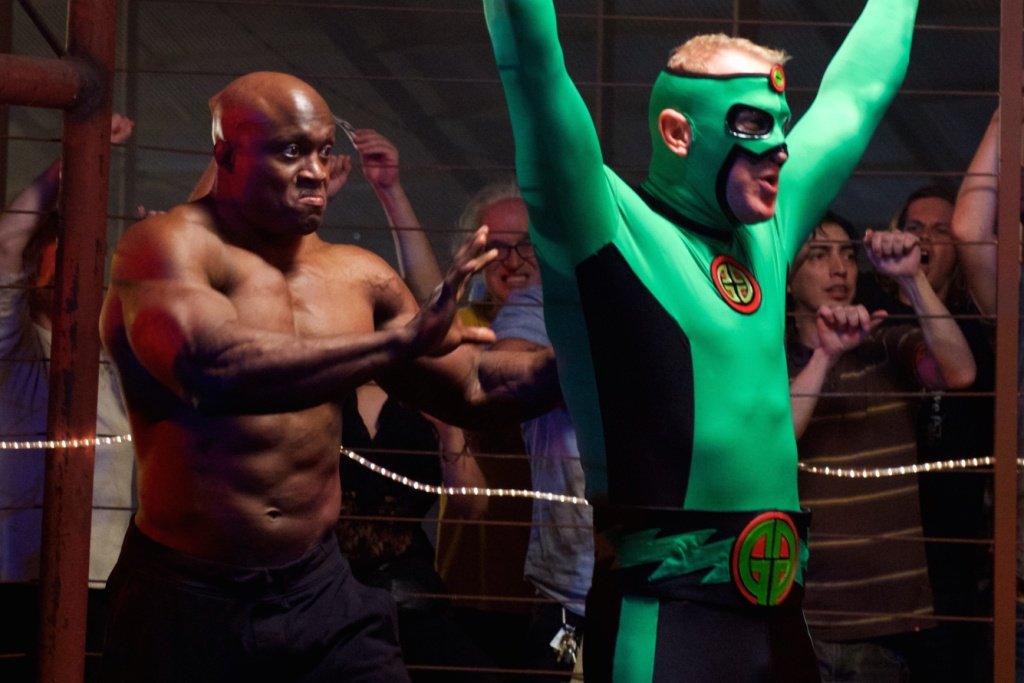 Charlie’s car dealership isn’t doing well. He isn’t focusing on work and finds wrestling to be more fun. There could be something meta about this. Charlie also shares writing credits. So he’s expressing his doubt about blowing his money on a B-movie, instead of taking care of his business.  Soon, Charlie is visited by his ass-kicking Mexican sister, Karina (Sofia Pernas). She saves Charlie when some random bad dudes with superior fighting skills try to kill him.

Charlie immediately visits his Mexican nana. She calms down her adopted gringo and explains to him their duties as the guardians of the universe. The nana has a bad-ass sister, and her all-powerful son Drake (Marko Zaror) wants to bring upon an apocalypse on Earth by opening these freakin’ stargates. Of course, the enemies’ plans can be thwarted if Charlie realizes his potential.

For that, the nana sends Charlie and his alleged siblings to train under three great masters. The star of Robert Rodriguez movies Danny Trejo plays Master Gin. He is supposed to be good at drunken boxing or something. As one character remarks, he is good at the drunken part. Thankfully, unlike the other actors, Danny Trejo never takes himself or the role seriously.

The Hollywood stunt coordinator Andy Cheng plays Master Hung. The MMA basics are covered by Master Kane. There’s a Rocky-style montage, which kind of rips-off things including the music. Nevertheless, Charlie allegedly gets shipshape for the final battle. They all head on to a Mayan Pyramid in Central America to save the nana and kill the villains.

Related to Green Ghost and Masters of the Stone: The Legend of La Llorona [2022] Review: An Unimpressive Retelling of the Mexican Myth of “The Weeping Woman”

The movie ends up with Charlie paying tribute to his real-life nana. He shares some cutesy pictures from the family album. By the end, despite all the awful things I witnessed, I didn’t mind it or revolted by the experience. Stargate, The One, mystical powers – it’s all part of the regular bullshit concocted by multi-million dollar Hollywood projects. A little bit of Indiana Jones, The Mummy, Kung Fu Panda, add some bland pseudo-cultural references, and eventually present it with hilariously bad staging – you’d definitely get something like this.

Naturally, Green Ghost and Masters of the Stone totally lacks the technical finesse, writing skills, and suffer from entertainingly bad acting. But this clumsy and stripped-off version of superhero action flick sounds okayish, when you learn about the love (and ego) behind the project. And even while watching it in vacuum, the fight choreography (including the wire-fu) seems pretty good for its budget. Eventually, it is ridiculously fun to experience such bad movies.