A part-autobiographical coming-of-age odyssey, Alexandre Franchi’s Happy Face [2018] entrances audiences with its charm-imbued storytelling, it's fresh, yet universal thematic execution, and most importantly, it’s larger-than-life performances that are endearingly cathartic in nature.

Beauty! How does one define the term, and who gets to decide what it means? Is beauty only synonymous with symmetry, with ‘perfection’ [provided such a state of being even exists], and the obsession with aesthetics that is only skin-deep? What about the facially different – individuals who do not conform to societal standards of what is deemed ‘perfect’ or ‘beautiful’? Having garnered skewered connotations steeped in superficiality, the term ‘beauty’ has been bastardized time and again due to narrow societal norms of acceptance. When outward appearances are leveraged upon to determine an individual’s self-worth, social standing, and personal identity, beauty becomes a thorned rose, a poison seeping into our sinews, a miasmic plague, a sham.

A part-autobiographical coming-of-age odyssey set in 1992 Montreal, Alexandre Franchi’s Happy Face has been fittingly described as an “antidote to the tyranny of beauty”. Wowing audiences with his masterful strokes in The Wild Hunt (2009), Franchi makes a powerful comeback with Happy Face – showcasing real, facially different actors, sans any make-up or artificial filters, culminating in an overwhelmingly authentic cinematic experience.

The representation of individuals deemed as “the other” or “the outsider” based on their physical appearances in cinema, has been rather convoluted and controversial. Tod Browning’s 1932 feature Freaks harbors a complex legacy, replete with critical contempt and eons of censorship, although the film still holds the power to provoke, to shock. On the other hand, Happy Face entrances audiences with its charm-imbued storytelling, it’s fresh, yet universal thematic execution, and most importantly, it’s larger-than-life performances that are endearingly cathartic in nature. 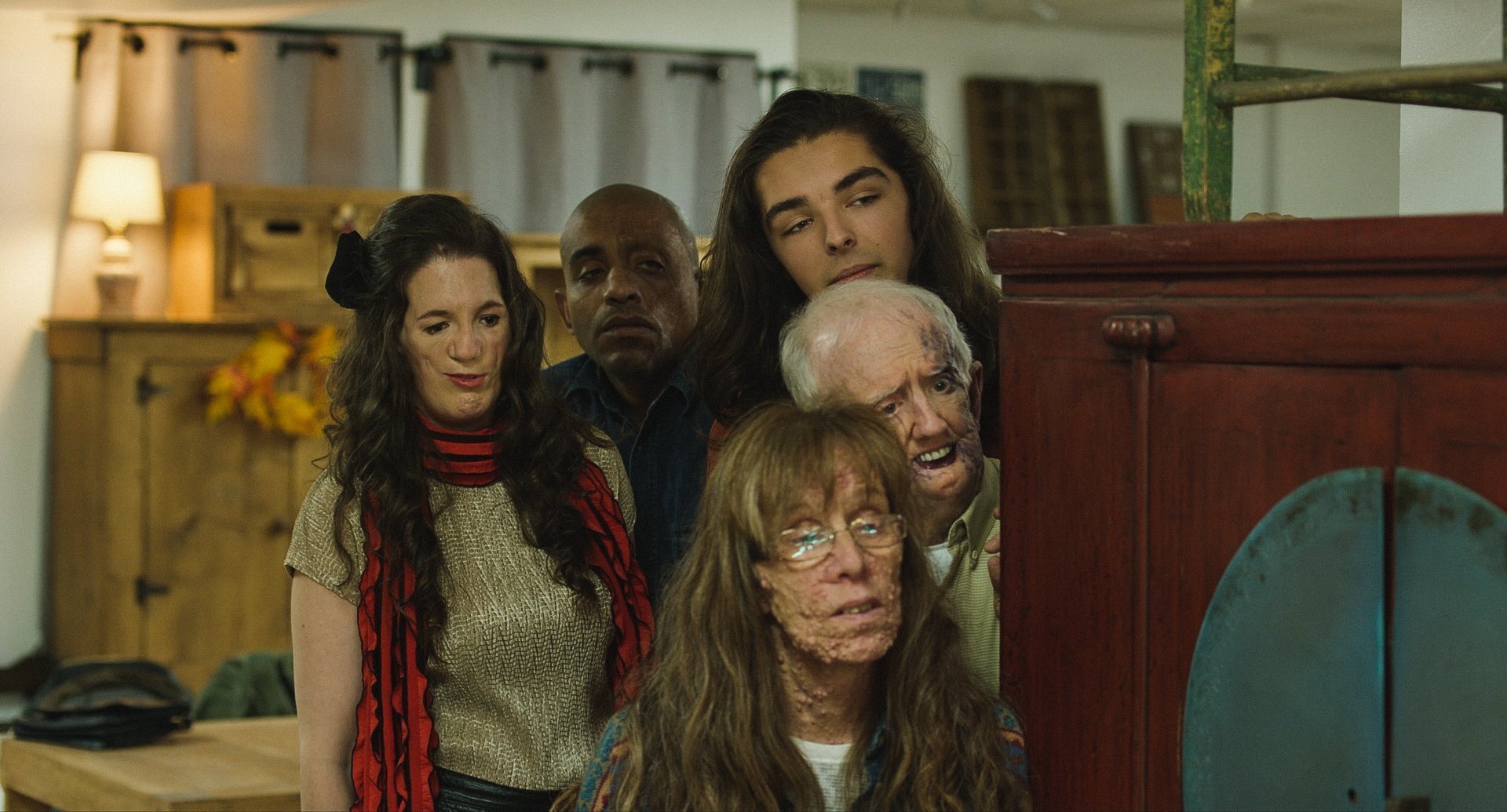 Following the emotional tribulations of Stan (Robin L’Houmeau), the film plunges into a therapy session for the facially different, wherein the protagonist introduces himself as Augustin, coupled with the introductory uttering “I’m disgusting”. However, a few moments later, after the support meeting ends, he peels back tape and bandages to reveal his reflection in the mirror of a secluded washroom: a handsome, young face, a thing of beauty, addled with grief, denial, and “terrible, extreme guilt”.

While his infiltration into the support group, which is a safe haven for individuals who battle marginalization, invisibility, and derision on an everyday basis, initially sparks indignation for the other characters and audiences alike, the narrative gradually peels back the heartbreaking layers of Stan’s inner life. Unable to face the unpleasant reality of his mother inching towards the jaws of death, Stan directs his energies, albeit in a misguided and ironic fashion, towards helping the individuals in the support group accept who they are, by alleviating their immense sense of fear and isolation & urging them to unsettle the world with an unbridled expression of the self.

Dungeons and Dragons plays a seminal role in unraveling the true essence of the film – Stan’s insistence on ‘embracing the myth’ mirrors his situational dilemma and escapist tendencies, wherein he equates the fantasy of curing the accursed queen with the unreality of salvaging his dying mother, which serves as the emotional climax of the film. Members of the support group, including Vanessa (Debby Lynch-White), Otis (David Roche), Buck (Cindy Nicholsen), Jocko (Eddie Ramon Ruiz Jr.), and Maggie (Alison Midstokke) take on the personas and abilities of different Dungeons and Dragons figurines, as a testimony of self-acceptance, personal power, and yes, a certain sense of true beauty. The cast belts out authentic, moving performances, with L’Houmeau carrying the emotional weight of the film.

While the film does have its faults – Including certain scenes, which seem anticlimactic and discordant in nature, Happy Face is a cinematic experience like no other. Films like these hold the ability to inspire, to challenge preconceived notions, to tug at the heartstrings while highlighting the struggles of real, everyday heroes in a humane and enlightening manner.