Hereditary (2018) Explained: A 21st Century Horror-Realism: Directorial debut of the celebrated Midsommar fame Ari Aster, Hereditary (2018) is a supernatural horror film that caught the world by a storm on its release in 2018. It premiered at the Sundance Film Festival and was received a lot of accolades and recognition. The film loosely follows the story of the Graham family- their mental challenges which were doubled up by the supernatural energy doomed on to them. Since a lot of reviews have been published about the film- this one is mostly going to analyze the themes, symbols, and narrative tropes of Hereditary. So if you have not watched the film, it’s best to drop this reading as it might have some spoilers.

Horror Realism is a term that is not used for films frequently since it is a genre that combines realism, surrealism, and supernaturalism within the narrative. Hereditary is one of the few films that can be boxed in this genre owing to its unsettling, harrowing, and slow-cooked narrative scheme. There are no jumpy ‘oh! It was just the wind’ moments or startling appearances of dead people in dark basements. Rather the first half focuses on building the stage on what is to follow in the latter half.

Largely, the film depicts the sinister fate of the Graham family who first lost their grandma and then their younger daughter in a car accident. What follows is a series of cryptic occurrences, hair-raising terror, harrowing instances, and sheer fright that follows long after the credit rolls on screen. The film jolts the audience from the very first few minutes when we see Charlie cutting the head of the dead pigeon with a pair of scissors un-flinched. Not just this, Charlie’s eccentric and aberrant appearance was disconcerting and unsettling, to say the least.

Hereditary is also said to be a ‘Horror-Realism’ film because it blurs the lines between mental health, supernatural and Biblical references. In contrast to a mainstream, run-of-the-mill horror film, here a character did get strangled (Peter) but not by a possessed body or a witch but by his own mother who was sleep-walking and suffered from PTSD. The apparitions seen by the family members can be easily passed off as hallucinations as they were dealing with a tremendous loss (death of their teenage daughter).

Aster has carefully and skillfully crafted the narrative to keep it strictly realistic till the mid-way and then gradually delved into supernatural and cult references later on. The build-up is huge. And how!

Recurring Themes and Motifs in Hereditary

As all of us noticed, dollhouses are a recurrent and very spooky motif that is used in Hereditary. Annie (played by Tony Collett) is a miniature diorama artist who designed these dollhouses for exhibitions. Time and again, Aster has tried to create drama and escalate the intensity of the bizarre setting through these objects in the films. Dollhouses in Hereditary are indicative of the pregnant unearthly atmosphere of the house. They are also a symbol of anticipated claustrophobia with their tiny rooms and interiors.

Another noticeable factor is how Annie was the creator of the dollhouses as she is the creator of her own fate. Aster also hints at this possibility at a certain early scene in Peter’s class where the topic of discussion is ‘hero is undone by his fatal flaw’. And just like in Peter’s class, the topic is forever open for interrogation even in the film as we can never decide if it was Annie who landed her doom or if it was hereditary and was passed on to her and her family.

One of the most blood-curdling motifs of Hereditary is Charlie’s infamous tongue click. It is nothing horrific and yet it manages to petrify you every time you hear it. When you hear Charlie clicking her tongue at Grandma’s funeral, you will pass it on as a mere gesture. But gradually, this one wave-of-the-hand gesture becomes so sinister and terrifying that it will stay with you long after you have watched the film. 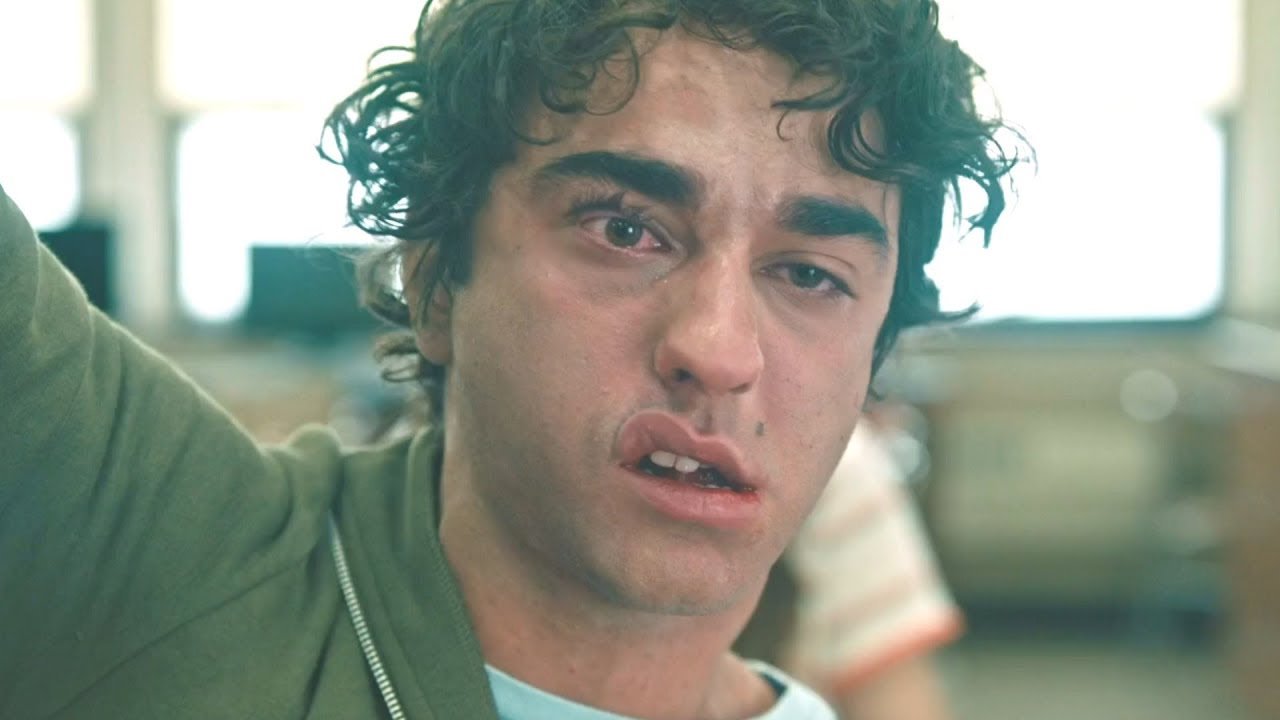 It not only startles the audience but it even startles the characters in the world of the film. For example, when Annie is driving back from Joan’s after the seance, she is freaked out to hear the tongue clicking in the empty seat in her car. And by the time we hear Peter clicking his tongue in the climax, we know that the worst has come to worst now. And that no power in the world can save Peter now.

3. Writings on the Wall

There is a good build-up to the writings on the wall that have occasionally made their cameo on screen. First, we see ‘Satony’ written on Grandma’s wall, then we see ‘Zazas’ written on Charlie’s wall and ‘Liftoach Pandemonium’ later on. A little more towards the end we see Grandma’s apparition appear in front of Peter who starts saying words like ‘Zantany’, ‘Dagdany’ and ‘Aparagon’. Although not a lot has been said about this, the theory goes to say that both Charlie and Ellen were trying to fester Peter’s body by driving his own soul out with the use of these words.

Desecrated Grave is more like a metaphor instead of a symbol or motif, but we still thought it best to mention it here, for theory’s sake. The occurrences in the Graham family arise with the death of Ellen Leigh- the mother of Annie. We would like to believe that it all started from there- she was buried in the coffin after which her grave was desecrated. This incident was followed by Grandma’s apparition to make a visit to Charlie in her school. And immediately after, we see the electric halo following Charlie in her room. Can we draw a parallel here? Do you think grandma manifested herself into Charlie? Who’s to say!

Electric halo is a harbinger of a sinister phenomenon in the film. Charlie was haunted by it in the initial stages of the film when she was in her house. This symbol was almost forgotten about by the audiences till it made a terrifying comeback in Peter’s classroom. From then onwards, it became a constant insignia of supernatural and fright. The last we see of the halo is when it comes in a spherical light and enters Peter’s body towards the very end of the film.

6. The Importance of the Symbol

Every horror film comes with a symbol of horror or the symbol of being of the horror, and Hereditary is no different. The circular drawing with the outline of four folks is not just spine-chilling but also indices a real fear in the bones. It comes very early on in the film when Ellen Leigh (the grandmother to the kids) is laid in her coffin, she is wearing a locket with the same sign. And it also doesn’t take a genius to pinpoint the appearances of this symbol time and again throughout the film. 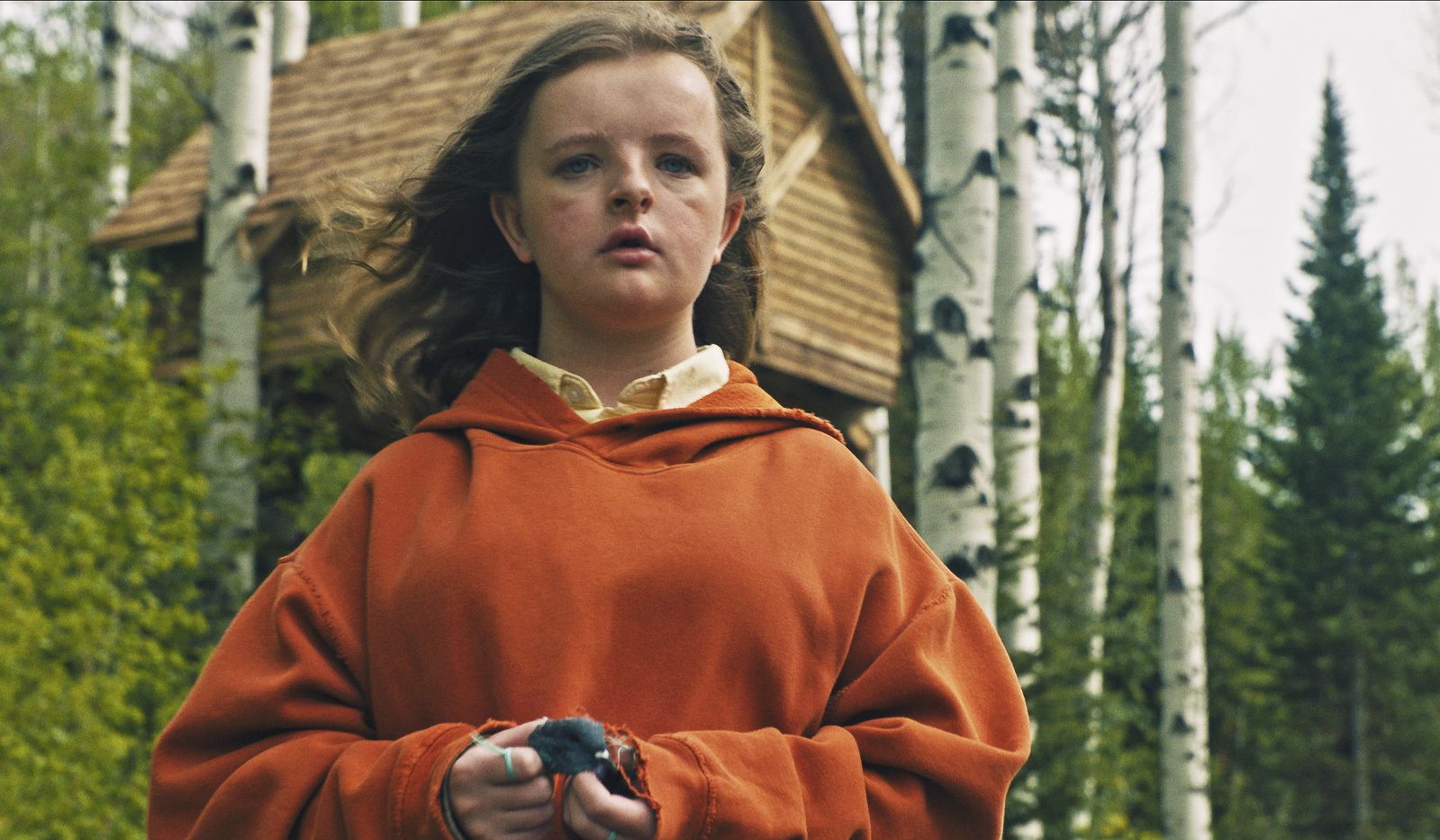 7. Introduction of the Object of Event before the Event Itself

Last but not least important motif that we would like to talk about is more like the skillful craftsmanship of the director rather than a symbol. It is how Aster has brilliantly defined the objects of events before the actual occurrence of the event itself. For example, the deadpan stare at the pair of scissors before Charlie proceeds to decapitate the pigeon’s head. The vehemently chopped nut before the terrifying nut allergy of Charlie. The indication of Joan and Ellen being friends through the welcome mat. And the doll Peter’s headless body before Annie sleepwalks and actually tries to pull his head off. (Tell us if you have noticed more).

Hereditary follows a devout 3-Act structure technique of screenwriting and has its scenes well-divided into acts 1, 2, and 3. The camera opens to a shot of the treehouse through the window and ends on the diorama model of the same treehouse. Even the climax takes place in the treehouse. So much so, that Aster wants to imply and assert the importance of the film (and also life) coming full circle.

Aster set up the stage for Act 1 by introducing the characters and giving the exposition. The inciting incident comes at the brink of Act 2, with the killing of Charlie. This was followed by the immediate family trauma, and Act 1 coming to an end.

Related Read to Hereditary (2018): Minari (2021) Review: An Impersonal Account of a Personal Story

In Act 2, the audience is introduced to a new character- Joan. Annie’s and Peter’s dis-cordial relationship is explored at length which is followed by Annie making the diorama of Charlie’s accident. Here we also see the marital relationship between Annie and Steve beginning to fall apart. The Point of No Return (midpoint) arrives at Joan’s house when she conducts the seance to call back her dead son. This is the point when realism merges into surrealism and supernaturalism, and now there is no going back. Till now, the audience was shown only motifs and symbols, and ambiguous apparitions of the dead that could have been hallucinations. But here onwards, the director wants to delve into and invoke supernaturalism. The act ends on a high when Annie tries to conduct the seance in her own house which turns out to be a disaster and a beginning of new troubles for the family.

Act 3 begins when Annie begins to identify that there is something sinisterly wrong with the way things are. She sets out in search of Joan where the audience realizes that Joan was actually using supernatural powers on Peter. Things fast track and Grandma makes an appearance for Peter, followed by Annie learning the truth about her mother and Joan. Right after, the film embarks onto its blood-curdling and petrifying climax with Steve burning to death and the emergence of several naked and/or headless bodies in the house. More than anything, the climax is deemed to be very Kubrick-esque because of its bold depictions of human bodies and their relation with the dystopian reality and supernatural. Soon after, Peter is possessed and crowned King Paimon- one of the eight kings of hell. And the rest is history!

Let us know what you think about this in the comments below!