How often does it happen that our life presents a sharp contrast from the floral printed fabrics that we decorate our house walls with? This is something obvious. Our life is always a little bleaker than how we present it. The floral motifs that mark their presence in Islands (2021) mark exactly that. These are but trivial details in a fantastic feature directorial debut by Canadian filmmaker Martin Edralin. While the filmmaker organically puts his moving story above everything else, it is his story-telling skills that shine through any minor crack there is.

The film establishes early on its protagonist. Joshua, for that matter, is an unlikely one. The middle-aged man is just too shy to make contact with anyone other than his mother. And this is exactly why he has not married yet, while his younger brother Paolo already has two grown-up children. The Filipino man chooses to take care of his elderly parents. As death of his parents gets nearer and looms large over him, he finds himself lonelier. This is where his Kuwait-returned cousin Marisol comes into the frame, giving a sense of companionship to him.

Loneliness isn’t lyrical or beautiful for Joshua. He is coping with depressing levels of existential crisis. Add to that a heavy moral responsibility, which disables him from expressing his distress. So, we see him asking Jesus for washing the desolation off his life. He is a very polite man-child, deeply religious and extremely reserved. The use of Christian imagery gets so amped up at a point that you feel the film would take an eerie Saint Maud-esque path. 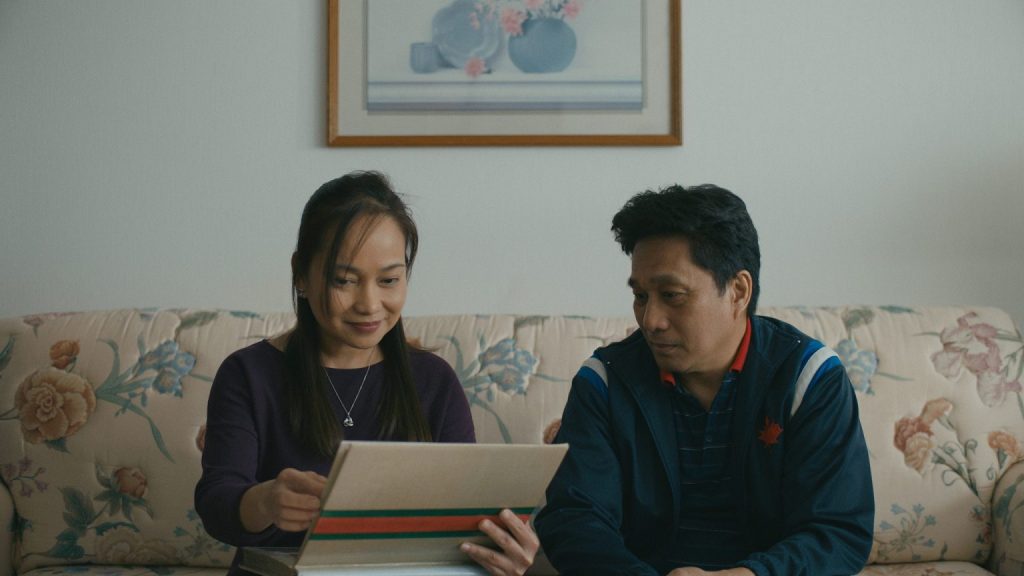 Thankfully, it doesn’t. Instead, it lingers on, just like Joshua, towards the present. The film also effectively conveys the drastic pain immigration causes. Yes, Joshua and his familial community have lived in Canada for quite some time. But the fact that they had to leave their land back in Philippines is a cause of endless grief for them. The use of Canada wall hangings and mapel leaf printed coffee mugs was a wonderful touch.

The aesthetics of Islands is stunning. It doesn’t hyper-stylize a working class life. However, it is a delicate visual study of a middle-class man trying to get by. Among many other things, Martin Edralin is successful in depicting the hardships of adulthood. He creates this well-rounded family which has characters who are familiar yet extremely memorable at times. It is partly due to the strong acting talent involved, but I think it’s the writing that elevates this film to its politics of loneliness. Edralin takes some sappy scenes from mainstream Asian films and turns them into something extremely poetic and palpable. The end of Joshua’s heartwarming romance is extremely heartbreaking. And yet, somewhere it feels important as well as reassuring that it exists. The film doesn’t conform to a simple resolve but that is its biggest strength.

We dismiss simple dramas that unfold at their own pace without breaking a new ground. Islands is a simple drama and yet, it cleverly subverts its own beats. Every scene comes with a meaning and allegory but it is also clearly taken from a mundane slice of daily life. The brushstrokes are tight at times but they are mostly universal. These are believable people and their complaints from life comes from a place in their heart. And that’s perhaps the most admirable thing about it. The microcosmic flavor of its direction alone is worth every penny you might spend on it for a possible theatrical experience.

However, the acting is the film’s most remarkable achievement. None of the actors involved in the film have done any considerable work in cinema. Yet, even the most insignificant parts are played with a distinctive cinematic energy.

Rogelio Balagtas definitely deserves a bigger acknowledgement for playing Joshua with such effectiveness and sensitivity in what is supposed to be a debut. Esteban Comilang won’t be able to do many films in his life going by the fact that this is his first, however, he is fantastically expressive. As old Reynaldo, he has a feverish charm akin an old man from a Studio Ghibli movie. This is a man on the face of death and yet, we don’t pity him even if we want to. His quiet presence exerts peace and positivity. And then, there’s the wonderful Sheila Lotuaco. As Joshua’s caregiver cousin, her performance sparkles with heft and sentimentality of the right amount.

It’s hard to find the kind of cinematographic work that understands the ambition and insight a filmmaker has put into his story. Diego Guijarro totally gets the backdrop. His previous credits include the Radhika Apte-starrer Hotstar show OK Computer which had some extremely unimpressive cinematography. However, this is right up the alley of some of the most renowned slow cinema gems in terms of sheer skill. The editing could have been a little more taut, rather than the occasionally episodic feel that it goes for.

However, Islands is the kind of film that rises above its technical loopholes to a great extent. This is a piercing portrait of love, loneliness and being left out. A broader audience would need to thank Martin for such profound storytelling. I would like to thank him for humanizing the material he has chosen.

The Best DC Films of the 21st Century