Ivanna (2022): Based on the novel titled ‘Meruntih Berang Ivanna Van Dijk’ by Risa Saraswati, ‘Ivanna’ is an Indonesian horror film. Directed by Kimo Stamboel, the film’s screenplay is written by Lele Laila. It stars Caitlin Halderman, Sonia Alyssa, Jovarel Callum, Junior Roberts, Taskya Namya, Jovarel Callum, and Shandy William in the lead roles. With the elements of a suspense thriller, the narrative tells the story of Ambar, who visits her ancestral house in Bandung and gets haunted by some terrifying events. We witness a slasher horror film that uses the present and past elements to build a grim and terrifying atmosphere.

The film begins with events from 1943 when Dutch people colonized Indonesia. Ivanna van Dijk (Sonia Alyssa) is one of the few Dutch people who feel a kinship toward Indonesia, unlike those from her country. However, some soldiers enter her house, and she looks for a way to save herself. One of the soldiers eventually gets hold of her and starts choking her. That is when her brother of Indonesian descent jumps into this scenario and saves her from getting murdered that way. 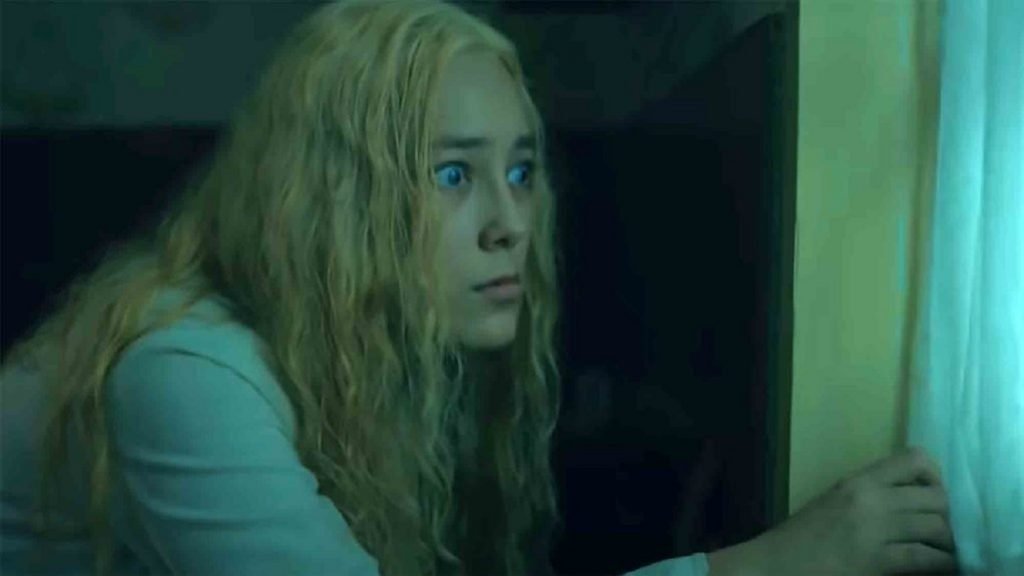 Then the narrative shifts to the year 1993, when Ambar (Caitlin Halderman) and her younger brother – Dika (Jovarel Callum), go to their ancestral house by bus. Through their journey, we learn about Ambar’s nearsightedness, because of which Dika often becomes her eyes. She walks into the house to be greeted with a warm welcome by a few, including her grandmother Ani (Yati Surachman). However, Rina (Taskya Namya) is not too pleased with her arrival since Agus (Shandy William) pays more attention to her.

While Dika plays around with frisbee with his grandpa, it falls into a nearby house. Arthur (Junior Roberts) decides to help him retrieve it, and seeing the two enter this place, Ambar also walks into this dilapidated place. While going through the house, she suddenly falls down from a weak wooden floor and discovers a basement. They see different pots over there, similar to the ones they have at their house. Looking through this dark room, they eventually see a beheaded figure sitting on a chair with blood on her robe. While all of them get spooked by it, Arthur feels it is a statue and confirms it by touching it.

Arthur brings back a box full of old stuff, and his grandfather surmises it is of the Dutchman who used to live there. While they go on to enjoy the night of the Eid celebration, the lights suddenly go off. After briefly talking about it, they all go to sleep. In the middle of the night, Ambar wakes up hearing sounds from the intercom and then walks out to see a blonde woman in white clothes (Ivanna) bringing an injured man along with her. She then runs back to her room and considers it a nightmare.

But then, mysteriously, some music starts playing, and the grandmother walks out of her room to find its source. Upon noticing a strange figure in the dark, she starts running away and locks herself in a room. However, she gets killed soon after. The next morning, Ambar asks Agus and Rina whether they heard the intercom sounds. Rina finds it absurd, considering the lights were off during the time.

Sometime later, they see the beheaded statue from the basement present in the living room. Rina discovers the grandmother’s absence, and all of them start looking for her. With her instinct, Ambar walks towards the same room that Ani had walked to and finds her beheaded. She starts screaming, and everyone learns about Ani’s tragic death. While they try to decipher how it happened within themselves or external opinions from the police, none of it gives them a satisfying answer about who the killer is.

While speaking with her grandfather, Ambar reveals that she can see supernatural elements with her vision, even when she cannot see far-off things in reality. Through the same, she sees Ivanna being dragged away and beaten away by soldiers. Other family members see it through the torches, only with the shadows of these figures. During her struggle to prove her allegiance to the country, she gets slashed in the neck with a soldier’s sword and gets beheaded.

Ivanna’s brother cries seeing his sister die in such a tragic way. He takes her to the basement where Ambar had fallen in the present. Ambar starts going there, and the family members follow her with their torches. Over there, the brother starts playing the song that grandmother heard playing before getting killed. He walks up to Ivanna, removes her clothes, and turns her into a statue with a layer of clay over her dead body.

Ambar sees him walking out of the basement, follows him, and finds him getting hit and dragged by two soldiers. Suddenly the chair from the basement falls down, and while looking at this sudden change, a family member gets choked by a hand that appears from the dark. He gets killed within a few moments, and so does Angus, who gets scared by the figure’s sudden appearance. Everyone else makes the best effort to save themselves from this strange figure’s capture and to get out.

When the family tries to drive away, they suddenly hear a recording of Ivanna speaking about her thirst for vengeance. She soon catches up to them and ends up killing Oma Ida. While trying to fight this strange figure, Arthur also gets brutally killed. The remaining five of them run right back to the house, where Ambar recalls seeing a Japanese soldier dumping Ivanna’s head into the well outside their house.

They run right to the same well, and the men repeatedly hit the body with an axe. They try to burn it with kerosene, and during their efforts, Ivanna chokes Ambar with one hand and Dika with another. While trying to save them, Rina ends up hitting them all down the deep well. Ambar sees Ivanna’s beheaded figure standing still inside the well and then stumbles upon her skull.

Right after that, Ivanna starts choking Ambar. However, Dika finds a lighter and turns it on just at the right moment to burn her into ashes. Ambar also starts hitting her continuously with an axe, and they manage to get rid of the horrifying figure.

Soon after getting saved, Ambar goes through the old stuff and finds an image of Ivanna, along with a couple. However, even when she leaves the place, the same music record starts playing yet again on the vinyl. Perhaps, the curse does not end by getting rid of someone since the hatred persists despite that.