The Mosquito Coast (Season 2), Episode 5: The previous episode of ‘The Mosquito Coast’ showed Allie and his family trying to find ways to make peace with their present situation. After sinking the ship that they arrived in, Allie leaves Margot and Dina with no other option but to stay captive to his plans. Created by Neil Cross, this thriller series is getting unnecessarily messier with every episode while trying to find a tonality and never being able to set its footing right. Justin Theroux is one of the few reasons that make it watchable.

While this action thriller is becoming more and more like a survival drama, the new episode presents the characters revisiting their past in one or the other way. 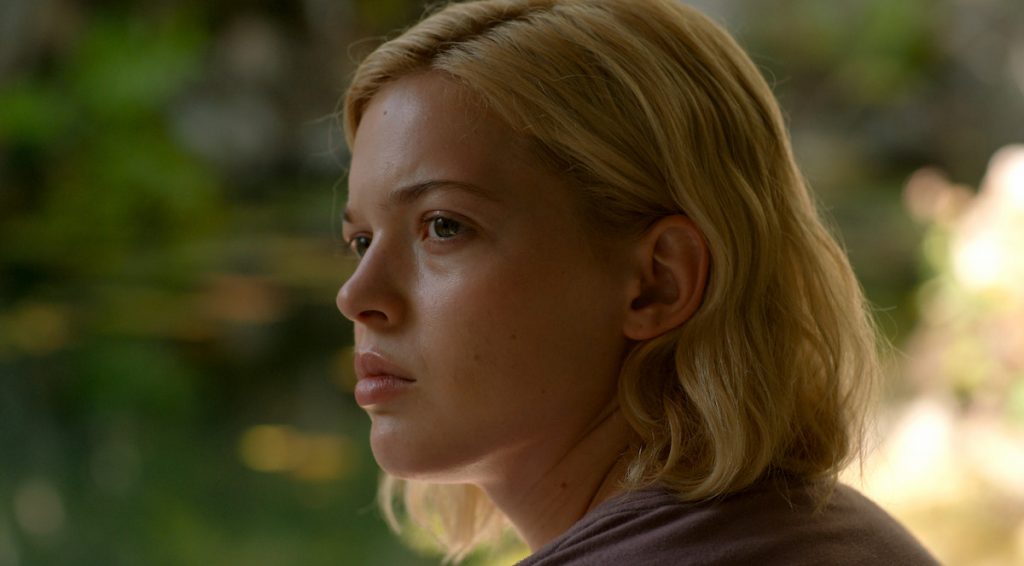 The fifth episode, titled ‘Positive, Front-Facing Optics,’ is directed by Alonso Alvarez. In the previous episode, Charlie (Gabriel Bateman) roams around in the rainforest they are currently in and stumbles upon outsiders who are taking a wild animal with them. While he safely reaches home after running away from them, he still gets captured on a trap camera, and now, Isela (Natalia Cordova-Buckley) comes to Allie’s (Justin Theroux) place to speak to him about this issue. She brings up the same picture that got taken and confronts him since she had warned him not to be seen by outsiders in any way.

He tries to justify it in every way he can, but she does not listen to his plea since his mistake jeopardizes the lives of people in this society, and she is responsible for their safety. She escorts him outside to a bar, where in the earlier episode William Lee (Ian Hart) accepts a job for Guillermo Bautista (Daniel Raymont). Upon meeting with Guillermo, who is in charge of ensuring the safety of those in the rainforest, Allie senses displeasure about what happened with his son. He tries to call it a naïve mistake by Charlie, but Guillermo considers it to be his (Allie’s) responsibility to take care that such mishaps do not happen.

Since the men that saw Charlie were known to him (Guillermo), he could make a deal not to disclose any information about it. However, as compensation, Allie is asked to do a specific task for him for which they need two persons. Being comfortable doing things and making decisions independently, he is unsure how to work with someone else. That is when Guillermo introduces William as the new person who started working for them. Allie and William have a shared unpleasant history, and because of this, they parted ways. However, he realizes now that he has no other option but to work with his old colleague.

Guillermo and Isela inform him about an organization that is planning to use their land to build some urban developments and parking spots for people from the outside. It mainly suits wealthy people, which is why they fund and support this project. However, Guillermo does not want this encroachment on their land and wishes to bring their ugly side in front of the world. That’s why Allie and William are supposed to go on a mission on a task to malign their image and bring the truth to the forefront.

While Allie tries to work along with William, Dina (Logan Polish) and Margot (Melissa George) are still not on good terms with each other. Dina is persistent in her attempts to escape, while Margot keeps insisting on their unpreparedness. Meanwhile, Charlie keeps having nightmares because of the memories of what happened in the town they were in. He is in a moral dilemma about killing a person, which takes a toll on his young mind. Amidst their internal conflicts, an old acquaintance of Margot & Allie arrives in this rain forest – Margot’s ex-husband, Richard Beaumont (Ariyon Bakare).

Margot is still unhappy about killing a person for their cause, while Richard seems perfectly zen about it. When they speak about it along with Isela at her place, Dina overhears it from outside. Margot notices her and goes outside to speak with her about these new revelations. Since she was not aware of this incident leading them to be on the run, she is angry at Margot. While until now she kept blaming Allie for their transitory life, she now learns that it was Margot’s fault and gets furious at her.

Margot tries to justify it as a part of marriage where he is only playing his part for his partner’s well-being, but Dina is in no mood to empathize with her. However, she speaks calmly with Margot about the woman left behind. The guilt has taken a toll on her for years now. Meanwhile, Allie and Charlie get new, expensive suits to enter the organization’s office. While speaking about their differences in their past, they still go along with the mission. At home, Richard tries to grow kinship toward Charlie, but Margot resists his efforts since she does not want him to be there because he has no moral conscience about his actions.

While Allie and William reach the venue, they note several protestors cheering slogans against the probable project. They make their way through the crowd to enter the auditorium, where a speaker is conveying the project as a noble cause for past & future generations. They look around and see the affluent people responsible for making this encroachment happen. Right after that, they managed to enter the presentation room and knock out a kid who was in charge of managing it.

William tries to shoot him to avoid any problems in the future. However, Allie stops him from doing so. He then gets on the computer and starts an alternate version of the presentation that appalls the audience. This new presentation is shown with a voiceover that conveys the evil intent of the project while showcasing private pictures of the wealthy attendees. It creates havoc in the room, and they try to find the culprit behind it. Allie and William try to escape the venue. But since they lock all the doors to stop anyone from escaping, both of them are stuck in this place.

Where to watch The Mosquito Coast (Season 2)