Jungle Cruise (2021) is yet another theme park ride that inspired executives to base a film around it and possibly set up a franchise. In their bid to do the latter, they succeeded admirably as this film is clearly what audiences may consider an entertainer worth paying for. Moreover, they may also want more as it’s got a backstory with sufficient explanations, is well-paced, and doesn’t lag in any aspect. As an extra incentive to thrill those who may have visited Disneyland or may have seen the videos of the Jungle Cruise rides on media; they may notice the similarities between Dwayne Johnson’s introductory shenanigans and the theme park attraction itself. Hence, the makers paid homage to the source theme park ride.

Unfortunately, certain audiences may find a lot more similar things that could play spoilsport and lead them to brand Jungle Cruise as a ripoff. Unless the makers intended it to pay homage to other films of the studio/genre.

Related to Jungle Cruise (2021): All Fast and Furious Movies Ranked, According to Family Values

I wouldn’t call the journey in Jungle Cruise a cruise, as it really didn’t fit the definition of one. In fact, Dwayne Johnson, Emily Blunt, and Jack Whitehall embark on an adventure that had me thinking of Jungle Cruise as exactly what would happen when Indiana Jones meets Disney. I think this as Disney animators and director Jaume Collet-Serra successfully managed to envision the Amazon as a colorful Disney ride and merge it with archeological adventures.

Set in 1916, right in the middle of the war; Jungle Cruise begins in London and focuses on the segregation prevalent at that time. Given the setting and the location of the film’s introductory scene, it is but obvious where our villain will be from. Any guesses? These people don’t seem to have any other clothes apart from their uniforms. They never seem to do so in feature films.

However, this feature film did break away from 1910s tradition with a wardrobe choice that provided one of the protagonist trio with a really obvious nickname. It also set the ball rolling for acceptance of choice and progression that would eventually emerge as the years ticked by. This introductory scene does its job and carts the audience off to South America for a ride down to the Amazon and the cruise on the river.

While Jungle Cruise may be based on a river cruise theme park adventure ride and largely resemble one as well, history aficionados may have reasons to rejoice as the timelines, names, and locations of legends may match certain real-life incidents. Kudos to John Norville, Josh Goldstein, Glenn Ficarra, and John Requa for putting it together.

The same can’t be said for dialogues unless Michael Green, Ficarra, and Requa’s intention was to leave the audience poker-faced. These really were bad, but the team may have had their reasons. Unfortunately, in an era of streaming, audiences may not wait to understand these reasons. Please do. 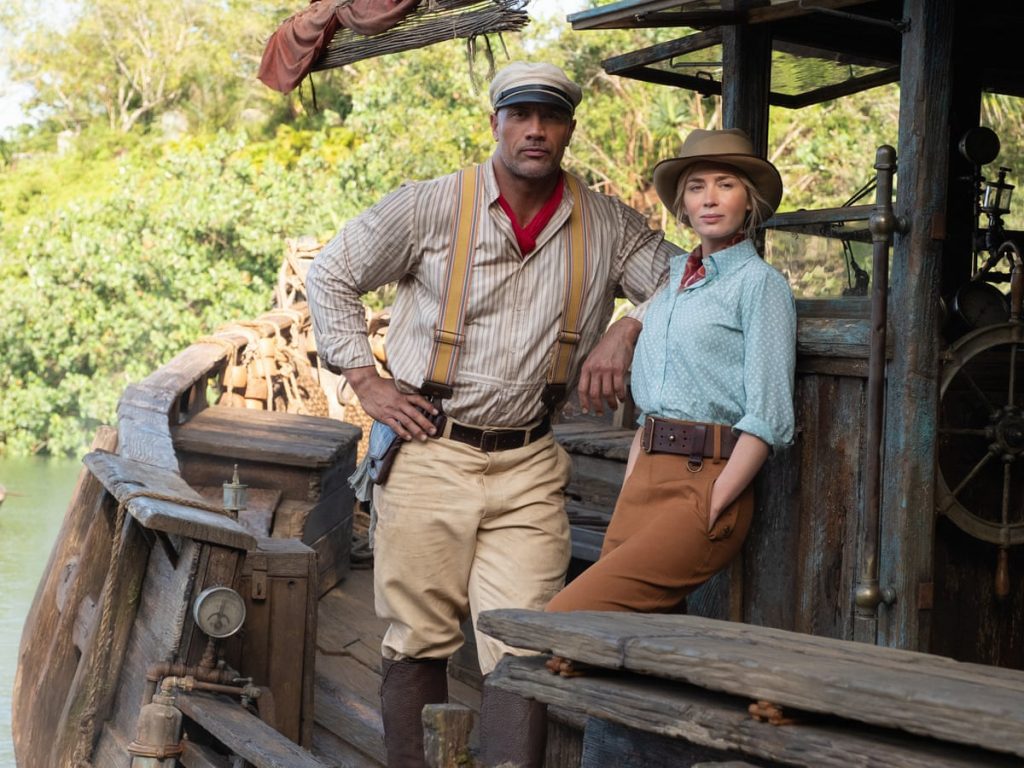 As the skipper, Dwayne Johnson lends his presence to the film admirably. However, one can’t really say that he absolutely owned the role and it would have been unimaginable had someone else played it. Perhaps Jason Momoa or Chris Hemsworth could have slotted in? That being said, The Rock ensured that audience perception didn’t veer excessively in that direction to call it a poor casting choice. Dwayne Johnson will go down as one of those actors who may not get that touchy-feely Oscar role, but he will be remembered as a people’s actor.

Emily Blunt (Dr. Lily Houghton) dominates the film as the stereotype-shattering woman going against the tide in the early 20th century. As an unabashedly outspoken individual and someone who likes to get on with it, she possesses an unexpected skill set, punches above her weight in an offbeat field for her gender, and even dresses differently. She is someone who you could say was absolutely needed in Jungle Cruise. And finally, Jack Whitehall as MacGregor is the reluctant accompanist. The evolution of his relationship with Proxima is a treat to watch.

The action sequences are entertaining and the one near the shore of the river reminds me of Jackie Chan’s action-comedy fights. This may be a change from Dwayne Johnson’s usual brute strength. The director opts to not let Dwayne Johnson’s muscles feature in this film, except for the one occasion where he gets called by a name that would draw your attention to his physique. The play-fighting style works with Blunt and Whitehall and also gives way to a highly amusing gag.

As The Rock wasn’t required to be threatening, it speaks volumes about how timid Jesse Plemons’ Prince Joachim was. It is unfortunate as he started off strong as a ruthless man who eliminated many innocent victims.

This Disney meets Indiana Jones adventure can continue, but it may be problematic to present yet another, well let’s call it ‘cruise’, to match the skill sets of the trio. While the stony equation between the leads did help, it will need a part two to see if they really aren’t compatible together as an on-screen duo. However, the other elements, such as the exploration of the Disney Ride being milked in a feature film, the introduction of creatures to bulk up the studio’s soft toy collection, and more fantasy adventure marriages, will be extremely exciting to watch. We also hope that the villain can raise the stakes in a potential sequel.

Jungle Cruise (2021) has it all. Action, adventure, drama, and something to just submerge yourself into for slightly northwards of two hours. Once the end credits roll, the chances are that you may not have felt the time.

However, if you are someone who has been an avid consumer of the genre. You may have noticed elements from The Curse of the Black Pearl, The Mummy, The Hunt for the Blood Orchid, Indiana Jones, and even Beauty and the Beast. Hence, you may feel that this lacks originality. But well, Jungle Cruise could give you that prod to watch these films.