Home»Reviews»Kiss Of The Rabbit God (2019) Review: The Essence Of Emulation
Reviews

Kiss Of The Rabbit God (2019) Review: The Essence Of Emulation The primary problem evident in films where the director aims to recreate the visual style of another is they tend to get trapped in one dimension of said style. It can be the colors on display, the composition, the movement of cameras, the editing, etc. Cinema is characterized by its synergy and therefore it makes it difficult to forgive this kind of uni-dimensionality. As a result of that, the final product in question becomes a hollow imitation which is stuck between its inspiration and its own form. A good example is how a number of big-budget films, especially reboots of popular franchises post Batman Begins have tried to emulate the film’s monotone and drab palette, managing only to present a desperate angst, without understanding that film’s modernist approach to a franchise that had previously depended entirely on its retro camp value.

Andrew Thomas Huang, known for directing music videos for the likes of Bjork and Thom Yorke directed a short film called ‘Kiss of the Rabbit God’ in 2019. Clocking in at 15 minutes, it is an ambitious film which explores the Chinese myth of Tu’er Shen or the Rabbit God, the patron deity of homosexuality in Chinese culture through a present day setting in a Chinese restaurant in L.A. It is visually ravishing. And within that short span of time, it manages to present its theme, that of forbidden love, rather potently through pure visual storytelling. What is the concern of this essay is how well it emulates the style of two directors, something that is evident from its presentation.

Related Read to Kiss Of The Rabbit God: The 30 Best South Korean Movies of the 21st Century

The movie’s setting is divided into two spaces. One is the Lucky Dragon Chinese restaurant where a Chinese-American, Matt, works. The other is this oneiric realm which seems to be ruled over by Shen, the Rabbit God himself, and where only he and Matt seem to exist. The majority of the film takes place in the restaurant where Matt works. The style here is a clear emulation of Wong Kar-Wai’s collaborations with cinematographer Christopher Doyle. Unlike a lot of directors known for their visual prowess, Wong’s aesthetic is not reliant on pristinely composed frames with meticulously placed objects and characters. Instead, his style is one characterized by its kinesis. And spontaneity. His films from the 90s, especially ‘Chungking Express’, ‘Fallen Angels’ and ‘Happy Together’, the latter two of which are the clear inspiration in this case are driven by a frenetic energy which dictates every aspect of their style, including their visuals. As mentioned, Wong’s style cannot be encapsulated in single frames. While screenshots of his films have the quality of old 16mm Fuji photographs, can the stuttering frenzy of Takeshi Kaneshiro running across a Hong Kong market in Chungking’s step-printed opening chase sequence really be captured in a single photo? The signature quality of Wong’s visuals, like his preoccupation with Hong Kong and the perpetual hysteria of a megalopolis, lies in its dynamism.

Huang hits the nail on the head with the restaurant sequences. The introduction to Matt in the real world, as he runs across the restaurant’s kitchen and pantry is shot without any regard for conventional camera angles. They have a frantic quality to them, capturing the fidgety nature of Matt’s job. The scorching, golden Argentine sun enters the kitchen of the restaurant where Lai Yiu-Fai works in ‘Happy Together’, adding a passing golden hue to it.

Related Read To Kiss Of The Rabbit God: The 15 Must-See Coming Of Age Films of 2019

In this film, the fire from the stove, overhead lights and ingredient labels add yellow to the Lucky Dragon Restaurant’s kitchen. In the sitting area, Huang uses light bulbs and yellow window panels to add a saffron glow to it. Green too has a transient presence here during the day. At night, it is the dominant color, making the place look similar to the restaurant from ‘Fallen Angels’ where the first assassination takes place. The colors mix and mesh with each other into this deliberate chaos that tries to capture how lights of a cityscape look. In terms of creating that lurid yet enchanting tone that Doyle made iconic with his collaborations with Wong, Huang captures the spirit of the place perfectly. 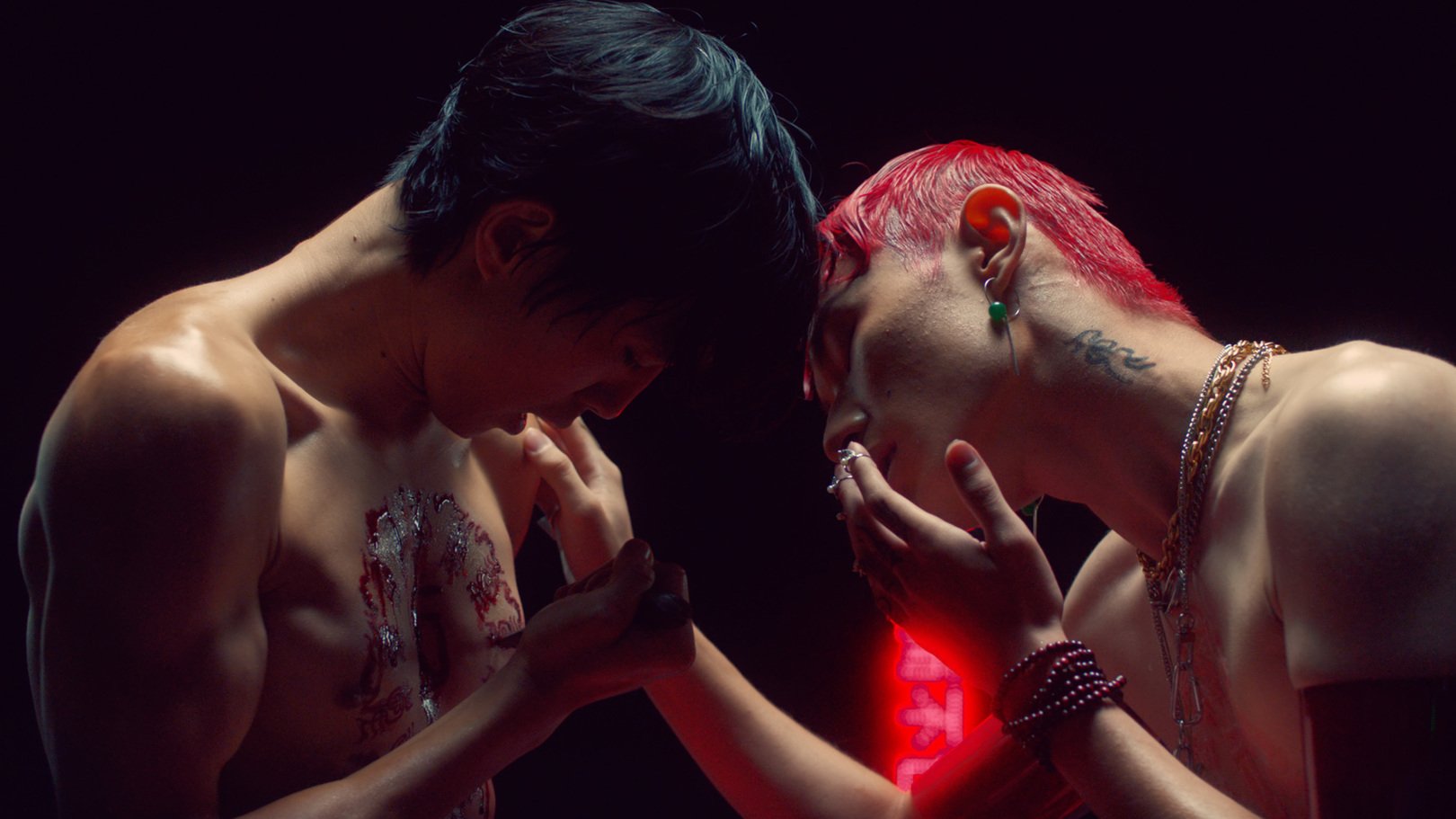 The cameras too follow suit. Once Shen has made his appearance, the camera becomes inert, to align with the stillness of Matt’s heart on seeing the charismatic Shen for the first time. Then, once the reverie is broken, the frantic quality is restored. Wong’s characters, when away from their beloved are either seen quietly reflecting on their feelings or diving deep into their work to keep the heartache at bay. The return to the opening’s feverishness shows Matt returning to his job to keep his feelings for Shen under control. The stillness is limited entirely to the scenes where Matt and Shen are seen with each other and creates a pattern wherein it becomes associated with thought and a search within Matt for his feelings. The frenzy, with Matt’s occupation and a desire to repress.

Also, Read: The Night Comes For Us: Elevating The Indonesian Extreme Action Genre

The dreamlike domain is very different from the restaurant and has a style that looks very similar to that in Nicolas Winding Refn’s recent films, especially ‘Only God Forgives’. Refn, whose work has come under vehement criticism for its stylistic obsessions is nonetheless an extremely individualistic aesthete. His shots are painstakingly composed and colored. Lying on the opposite end of Wong in the dynamism spectrum, his camera moves little, allowing the audience to soak in the world he creates with highly saturated colours that are always in contrast to one another. Unlike Wong, they are well formed and rarely ever spill into each other, with a painterly artifice. A lot of times, black surroundings are used to accentuate these colors, making them pop even more.

This dreamworld where Shen, the Rabbit God resides, looks somewhat like Huang’s rendition of the boxing ring from ‘Only God Forgives’, with a set of neon Chinese alphabets in the background adding an added facet to the scene. Here, unmoving cameras maintain the limited nature of the space which seems to be empty otherwise. A harsh, unmotivated light is what makes them visible whose plainness ensures that the colours are not marred by it. Shen’s costume at first and what he wears for the rest of the duration in that space is luxurious with an emphasis on a lavish tone of red. It is perhaps an indication of the passion on display. Red is also an auspicious color in Chinese culture, properly emphasizing his divine status. His hair too is of the same color throughout. The colors are rich and have a textured nature to them by themselves and the dark background underscores it in all its scintillating splendor.

When Matt cuts into his skin, possibly to show his loyalty to Shen who has this swollen engraving on his chest, the blood oozing out of his chest looks uncannily viscous. While nothing like Refn’s fetish for violence, there’s a chilling beauty to how his blood flows in a silken manner into the green apparatus on his groin which Shen was wearing previously.

It perhaps sounds at this point like the entirety of Kiss of the Rabbit God (2019) owes itself to some film or another but the beauty of it lies precisely in this successful reproduction that Huang carries out. The juxtaposition of these markedly different styles creates a highly effective dissonance between these two worlds. His understanding of what he is creating is deeply ingrained in his ability to examine and get to the root of what constitutes visual style and how it is much more complex than a simple cosmetic emulation. Kiss of the Rabbit God is a rare short film that within its runtime, manages to enchant and amuse with its mixture of style and story. Attributing the scrappy, improvised beauty of Wong Kar Wai’s aesthetic to the human world and the diligently crafted vision of Refn’s style to a divine turf shows an imposing awareness of cinematic language. It is an exemplary work that can teach any film director or visual artist intending to depict their inspirations in their work to do so by understanding the essence of what it is that they are attempting to emulate.

Shahim aims to be associated with films in some capacity all his life. To him, Welles, Cassevetes, Tarkovsky and Haneke embody why filmmaking is the greatest of all art forms.

Top Malayalam Movies Of 2020 and Where to Watch Them Online