Even after all the media frenzy over Chloe Zhao as American filmmaking’s ‘it’ director, one still seeks an opportunity to reinforce how her most recent film “Nomadland” has now given filmgoers an incredibly special treat … that is, a most compelling third leg of an evolving arc in the American Neo-Western. Some current observers may be tempted to call this a move-over-boys inflection point in the genre, along with Kelly Reichardt’s recent work in “Certain Women” (particularly during the last segment of her 2016 trilogy, but lesser so in “Night Moves”). However, it appears that Reichardt has crafted more of an In-The-West personal signature, vs. an imprimatur that more fully radiates the West itself. Likewise, some work by Alexander Payne (notably “About Schmidt” and “Nebraska”) creates a necessary ingredient of expansive ambience, with an aging, yet always bravura, Jack Nick as the roving Schmidt (but Bruce Dern in “Nebraska” often pedestrian, and even cloying). However, Payne’s constructs fall somewhat short in their stature, in some measures like the quasi-political, exuberant Anti-Western, “Heaven’s Gate,” and Robert Altman’s equally ambitious, but subdued, dank and claustrophobic “McCabe and Mrs. Miller.”

But for now, we will leave these other talent-laden directors aside and can begin articulating this lineage with Terrence Malick’s 1978 “Days of Heaven.” Set in the early 20th century in the Texas Panhandle, Malick’s deeply affecting, lyrical cinematography scrolls us through the harsh cultural landscape of immigrant wheat farm laborers. Director Malick spares us no details in this panorama of nature and grace: A triangular love story between Bill (Richard Gere), Abby (Brooke Adams) and the Farmer (Sam Shepard), spoken through his quirky narrative format of Bill’s women-child kid sister, Linda. Typically cast amidst the soothing magical hour sunlight soaking the prairie, at both dawn and dusk, neither the winter freeze nor an eventual wave of pestilence can begin to attenuate such grandeur.

Related Read to Nomadland (2020): 10 Films To Watch If You Love Nomadland

Malick and Zhao bookend the economic maladies of the past and current early centuries, where both worlds are an extravagant whirlwind of have-nots in motion. Bill, Abby and Linda are refugees from the ovens of the industrial Midwest, where Bill’s fatal encounter with a co-worker forces the threesome to find a safe haven, which for these ragged outcasts are the bountiful wheat fields that can hopefully offer such a second chance. Director Zhao’s even more scorched prairie, really desert, from the expanses of South Dakota, Nevada, Nebraska and Arizona, tells us a similar story: That is, seasonal laborers trying their best to scratch out some semblance of economic certainty. Yes, and we even see Zhao’s apparent tribute to Malick (from his dinosaur sequence nearly thirty-five years later in “The Tree of Life”) with her towering 80-ft Wall Drug brontosaurus. 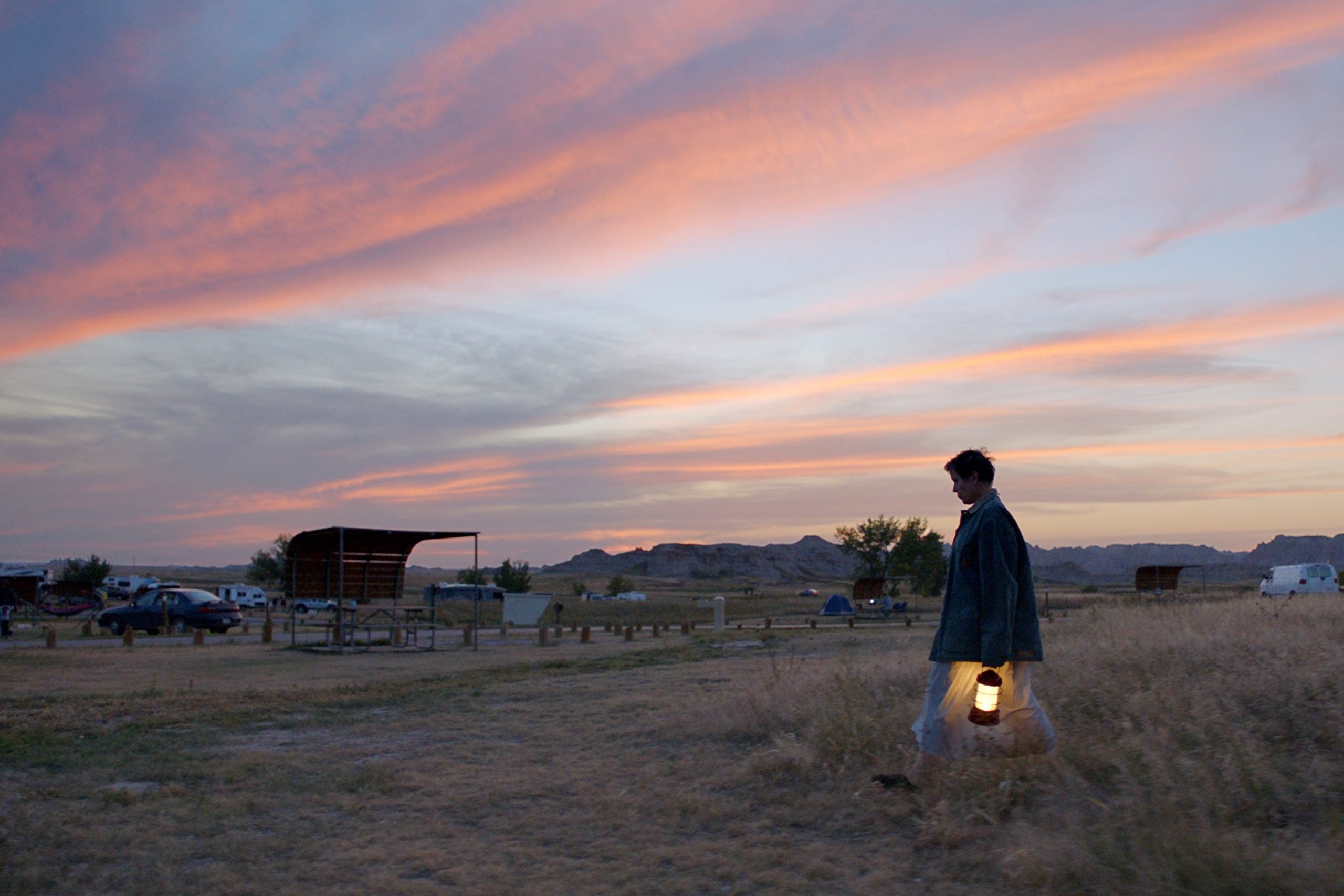 Although in ‘Days of Heaven,’ there is seemingly bleak endgame, with both life and farm in carnage, there is a final, more hopeful hint regarding the next chapter … literally hopping on the upcoming train to see where life takes us next. For the underlying premise of “Nomadland” is not about what and where the next stop will be, but, rather, that the next stop will be a good stop and right for that moment. If Malick’s overriding themes involve that intrinsic tension between nature and grace, with all their accompanying upheavals (as we once again revisit his more recent “The Tree of Life”), Zhao’s universe seems kinder and gentler: There is more warmth, and it is also more inviting.

In “Nomadland,” the narrative is provided by sixty-something Frances McDormand’s Fern (as opposed to Malick’s Linda Manz with her haunting reflections of unmatched precocity), a latter-day migrant worker, fast-forwarded one-hundred years later, who has been uprooted from her gypsum mining town. As we continue to try to understand the impact of the great recession of the first decade of the 21st century, Zhao paints us a portrait of economic disequilibrium where new metrics, which now attempt to define the term community, should be considered.

Now, one should reflect back to 1984’s “Paris, Texas,” where the mysticism of the American West (albeit envisioned by German director Wim Wenders) is once again serving as a central character. If on one hand “Nomadland” can be a somewhat disarming unspooling of the type of traditional, geocentric fabric of community, as we’ve known it, the obsessive march towards the redemptive reconnection of father (Harry Dean Stanton), mother (Nastassja Kinski) and son (Hunter Carlson) is the core element of “Paris, Texas.” When Stanton’s protagonist Travis emerges on foot from the desert during the lengthy opening sequence, we can only witness a mute and broken human being, who will be slowly and painstakingly, yet so gracefully, rehabilitated over the course of this lengthy film. In contrast, McDormand’s Fern has always been on terra firma. As she confidently strolls through her Arizona RV park as a chilly sunrise ritual, she is already a fully-evolved and realized member of her wandering enclave. The shared magnificence of both films is their quiet demeanor: Travis continuing his desert road trip, with his utterances at first being cautious and cryptic (but then transitioning to his near-final crescendo of allegorical salvation), whereas this Early Travis somewhat reminds us of Fern’s crisp, but glowing, expressions of companionship throughout her entire journey.

When we let the American West very simply teach us about love, companionship, and even hardship, then we find ourselves in the midst of major masterpieces. So, Chloe, thank you once again.

Mitch is a (not really) retired physician living in the Baltimore-Washington area nearly for the past fifty years. He has had very eclectic tastes in his profession, doing health policy for the Medicare program, and more recently doing addictions medicine and being a COVID lab director. Mitch has had no formal film training, but considers himself a thoughtful consumer of English-speaking films since 1970. He wonders what the next great thing in American/British cinema will be, along with the rest of us. At this time, he cannot determine if Netflix is our unavoidable destiny.