After watching yet another documentary about the natural world close on the heels of David Attenborough: A Life On Our Planet (2020), I find myself with a renewed enthusiasm for life and its beautiful offerings. Nature with its diverse flora and fauna has the magical power to inject zest into the dead cells and senses that wear out under the brunt of our modernized and so-called civilized world. That is why it becomes important to break free from the tyranny of city life occasionally, surrender our being to the magic of the raw world and come back re-energized. This is precisely what Craig Foster does in the Netflix documentary, My Octopus Teacher (2020), filmed in the brutal ocean waters off the Western Cape of South Africa.

After years of making some amazing nature and wildlife documentaries, South Africa’s top documentary filmmaker Craig Foster started feeling burned out and lost the will to do anything. Needing to recharge himself, he returned to his childhood home of natural beauty, situated off the Arctic Ocean with a vast expanse of underwater kelp forests. “My earliest memories, my deepest and most powerful memories were of this incredible coast and diving in what I call ‘my magical childhood forest’,” Foster says. “It is one of the greatest ecosystems on this planet.”

Initially, it was challenging for Craig to dive in after so many years, and endure the chilling temperature along with strong oceanic currents. But, gradually his body adapted and he started to find his rhythm in the ocean water. “Day after day, I slowly started to get my energy back and realized that there was this whole new way of looking at this underwater forest. And I started to come alive again,” he says. 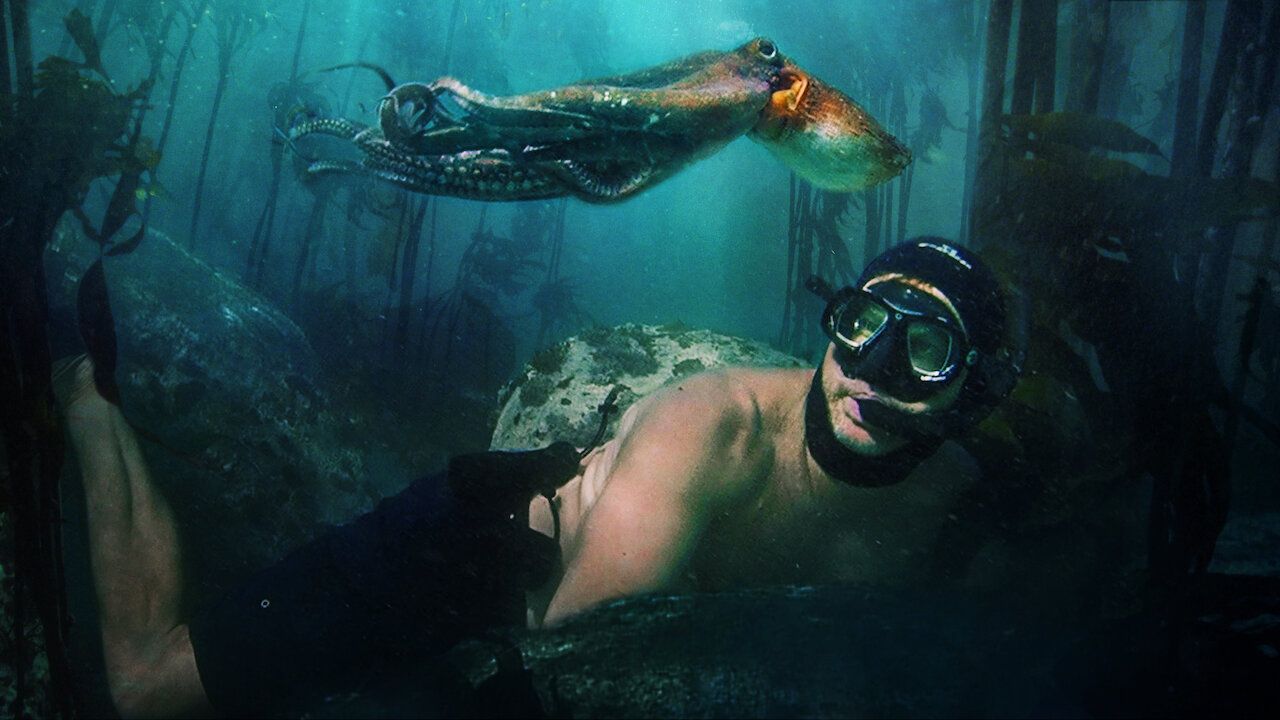 My Octopus Teacher chronicles Craig’s underwater encounters with one particular octopus in the kelp forests over one year of the wild creature’s life span. It is one of the most extraordinary films about the unusual and mystical bond that develops between the two. At first, the octopus is wary of Craig’s presence and gauges him from within her den. After seeing him daily near her den, one day she slowly extends one of her arms out to connect with Craig’s hand. Her fear is being replaced by curiosity. Later, she even comes out completely from her den and starts following Craig. The animal has now begun to feel safe in his presence. She no longer sees him as a threat. But, just then, he accidentally drops one of his camera lenses and the sudden movement scares her off and she swims away in fear. “Have I lost her forever?”, worries Craig.

Over the next few days, he desperately tries to locater her. She has left her main den and seems untraceable. Craig does a lot of studying at home to learn about identifying the tracks of octopuses, but all those efforts yield no result underwater. He soon realizes that to track her down, he needs to start thinking like an octopus. Craig now starts searching for the remains of fishes and crabs that she would have eaten and very soon, he lays his sight on the octopus. On this occasion, she is no longer scared after seeing him. Somehow, she seems to realize that he means no harm. Craig extends his hand once again and this time she completely embraces it and sits on it. Slowly, she crawls towards him and comes close to his chest as if wanting to hug him. The animal has started to completely trust Craig and no longer sees him as a threat. The connection he feels when he looks into her eyes, is almost divine-like, says Craig. “That’s when I realized: This animal trusts me. She no longer sees me as a threat, and her fear changes to curiosity,” he says. “That’s when the real excitement comes and you think, ‘Oh, my goodness, I’m being let into the secret world of this wild animal’ — and that’s when you feel on fire.”

Craig begins to swim with the octopus daily on her outings. It is here that he learns so much about her and the other water species in the kelp forests; the intelligent manner in which she strategizes her preying on fishes, her camouflaging of skin color, texture, and patterns in sync with the rocks and ocean surface, and her cleverness in warding off threats from scavengers and predators. But one fine day, a pajama shark that picks on the scent of its prey, comes attacking the octopus who tries to hide under a rock. The shark manages to bite off one of her arms and then leaves with it. Coming out bleeding with a severed arm, she crawls slowly back to her main den. This entire incident is heartbreaking for Craig. By now, he has become so attached to her that he starts feeling vulnerable. He starts getting worried about all the things dear to him. The life of his family, especially his young son seems so much more important to him now. 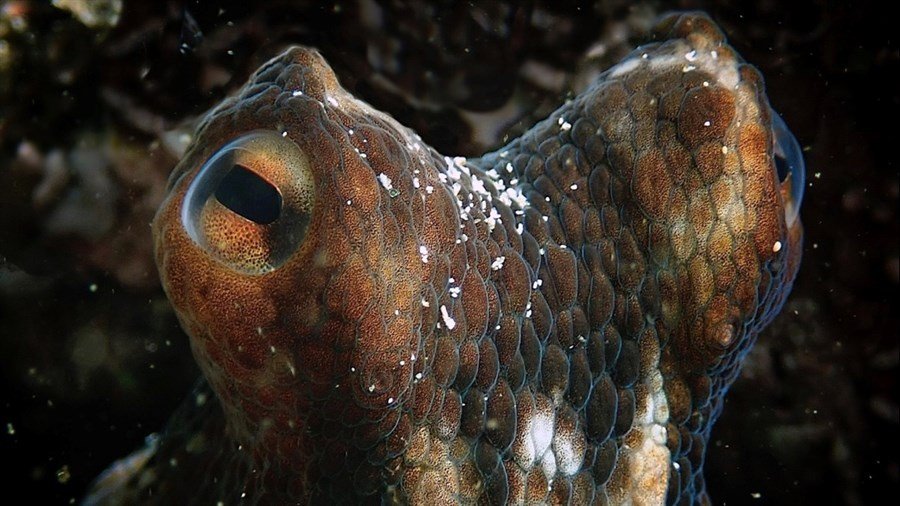 In about a month, the octopus has regained full fitness and regenerated a fully grown arm. Her entire process of recovery affects Craig in a very positive way. Through her bounce back, he gains the confidence to overcome his problems in life. Over time, he witnesses different shades in her personality. She doesn’t always prey on fishes; she also plays with them! She cuddles with Craig and wraps her arms around him time and again. Here is an extremely intelligent invertebrate who has 2000 suckers on her arms and every part of her being has a mind of its own.

One of the most brilliant sequences in the film where we get to witness the extraordinary intelligence of the animal is when it is being hunted by a pyjama shark once again. In a nail-biting chase scene (supported by a masterful background score), the tension builds when the shark frequently comes inches close to the octopus. She keeps on outsmarting it by camouflaging her body with rocks, sometimes with the kelp leaves and eventually by covering her entire body with seashells and tiny rocks within seconds. She has created a shield/armor around her! Craig is stunned on seeing these self-defense tactics of the octopus. But, the pyjama shark’s ability to smell her scent leads it to the rock-like armor and it pounces on her. Craig believes this time there would be no escape. He has to go up on the surface to breathe air.

When he comes back down in the ocean, what he witnesses completely shocks him. The octopus has escaped from the clutches of the shark and is now in the safest place – on the Shark’s back. It has outsmarted its prey and how! Craig is relieved to see his friend/teacher alive. Over the coming days and months, he spends more and more time with her exploring the underwater world. He has become obsessed with her and deeply attached too. But it has been one year of being together and the octopus is nearing the end of her life. Craig sees a fellow octopus near her den and understands that they would be mating. A lot of energy and a significant part of an octopus’ being gets spent on delivery; which means Craig’s teacher will die soon after laying her eggs.

She becomes very weak and fragile after the delivery. In her final days, she comes out of the den ready to give up her body. Fishes and scavengers are hovering around her to eat her off. It is a painful sight for Craig to see her decaying body. There are moments in the film where we see him getting emotional with his eyes moist and a lump in his throat. Finally, a pajama shark comes and consumes the almost dead octopus. Even in death, she teaches Craig the lessons of selflessness and sacrifice.

After her death, Craig frequently dives in with his son who has imbibed his father’s passion for marine life. He has been teaching his son all the lessons of underwater exploration and maneuvering around the different species. But most importantly, he has ensured to pass on his biggest learnings from the octopus. And, that is – kindness, compassion, and sensitivity. Even the tiniest of life form is important and deserves to be treated with respect. Craig has started a foundation called the ‘Sea Change Project’, through which he teaches fellow marine and nature enthusiasts the art of exploring underwater and connecting with the vast life below the oceans.

With more nature lovers of the likes of Craig Foster in the world, there is still hope for mankind and a chance to save the world. Sir David Attenborough would be mighty pleased if his recently released documentary on Netflix and My Octopus Teacher, succeed in opening the eyes of our human civilization.

Watch My Octopus Teacher on Netflix