Netflix’s ‘Kleo (2022)’ is a thrilling period spy drama that offers a viewing experience into the life of a disavowed Stasi Agent (a former East German spy) running loose to gain high moral ground at all cost, exacting revenge on those who conspired against her. She must work with unknown and known enemies.

These enemies are close associates and unknown people who become unlikely allies. With East Germany losing power and collapsing as a government, Kleo Straub’s last kill returns to haunt her present. She searches for answers about a life-changing sentence that alters her perception of reality, thrusting her toward an uncertain future in a New World Order.

Before the Berlin Wall comes down, Kleo Straub must kill a ‘CIA Agent’ in a club known as The Big Eden in West Germany. Perfectly dressed for the role of a lone female spinster looking to dance and party, she enters through a tunnel and passes through with flying colours to entice the target carrying a red suitcase. While her assignment is to take him down, she lures him onto the dance floor and sneaks him into a corner to sniff blow. When he does, he collapses dead. A guy at the bar is attracted to Kleo and sees the knife on her thigh. He wants her while she has other plans.

When Kleo eliminates the target, she returns to Andi, her lover, and her senior from the Stasi regimen. Uwe is a trigger-sensitive agent who uses addictions to control his impulsive behaviour. He is a close friend and fellow agent to both, Andi and Kleo, who is sitting alongside Andi. The following day she meets her grandfather and shares cake with him after dancing a little. Soon after, she discovers he has betrayed her and plotted against her. The resulting consequence is that she is jailed on the grounds of espionage. Stripped of any government status, Kleo is thrust into a new world with difficult truths to uncover.

As we progress through each episode, the producers deny any existence of these events that have taken place in real life. Yet, many signature undertones would relate to the history of the two states coming to call it quits on Communism and the fall of the Soviet Union’s power over East Germany. With socialism creeping into the East, we observe laws are put in place to protect the welfare of the Westerners who have limited access to the East than Easterners. We meet Thilo, a junkie who has taken over Kleo’s apartment and then becomes a very important part of Kleo’s life as a form to come back to a grounded reality that her world is changing.

Unbeknownst to Kleo, her socialist tendencies see her maturing as a woman. Contrarily, her grandfather’s staunch opposition to it belittles her wild ambitions for freedom. She understands her only choice to survive is to follow his instruction by staying in line under her Aunt’s tutelage in the Stasi Training Camp to become the best agent East Germany has ever had. After Ramona. While Ramona’s location and status are unknown to every agent and the agency itself, everyone else after her is within her shadow.

The conspiracies that may have taken place are fantasized so close to reality. There is a mention of Ramona as the only one who has had one successful attempt at the assassination of American President Ronald Reagan. While this is made a very prominent mention, Kleo accepts this as a reality nonchalantly while Uwe expresses his peaking fears. The tone of this 8-part series stokes a level of adrenaline in any alpha female who wants to strike her oppressors of any kind. It strokes the feminine ego just right enough for us women to stay on top of our game for any low moment of our lives. 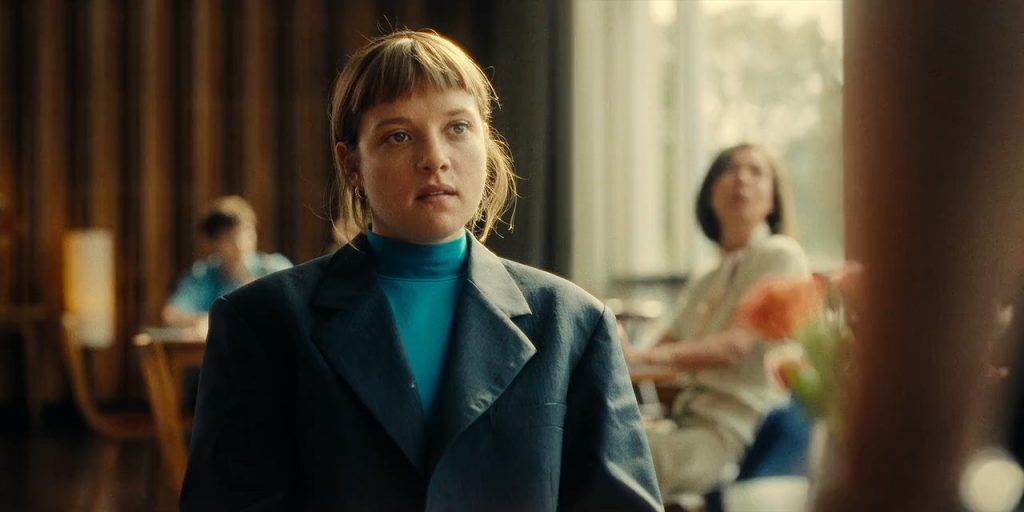 This comes back around in a different way when Kleo must take a couple of hits and is struck down by her equal and better self in Ramona. With the tender theme of motherhood being Kleo’s worst memory to recollect, her character truly blooms when the deciding moment of whether she must let her arch-enemy live for the sake of herself and a newborn baby. With an unlikely and borderline friendly support from a West German Police Agent, Kleo Straub remains a focus of how East Germany slowly collapses on tender secrets. Her ex-boyfriend Andi proves to be an arch-enemy betraying his own country to have one of his own killed and betraying Kleo without any qualms whatsoever. With this difficult truth, Kleo triumphs in the kinkiest way as is her style but the West German Police agent quietly slips like sand through her fingers achieving his own ‘objective’ of ‘international peace.

With Sven, now a former Western German Police Agent closely associated with Federal Intelligence Agent Min Sun, at Kleo’s heels, things seem different and the game turns when Sven finds a 30-second window to pull his weight and play the last card. After Ramona is revealed to be Andi’s wife in the present who married Andi to keep close tabs on him and his whereabouts, Kleo has tracked down the double agent who took the Red suitcase when the target was eliminated in 1989.

Jorge is an old acquaintance of both Kleo and her grandfather. He would only entrust the suitcase to someone he knows. But working in a pair is the luck that Kleo needs to save her life and this bit of luck matters when Ramona tries to dispose of her to clear the way to the actual location of the suitcase. With Ramona’s nine months almost up, Kleo and Sven locate the suitcase after Sven sneaks into Ramona’s hotel room and finds the map with a red cross marked for the precise location of the red suitcase.

After a deadly car chase, Kleo and Sven survive to find out that Ramona’s water breaks and she must deliver her child immediately. Kleo has a change of heart and swallows whatever ounce of emotion that is bursting out of her. Nevertheless, she focuses on what is coming ahead but with Ramona bursting with hormones, she allows her to have her moments with her newborn child and moves ahead with Sven.

They find the suitcase and finally take it back to the hotel. What reveals itself is something that both Kleo and Sven do not expect. When East Germany began to fall, someone had to be able to hold them together. This was not about being independent but it seems that the GDR was funded and held up by Reagen’s dollar much against Congress’s orders and wishes. This was a state secret that would blow a heavy punch to the self-esteem of Germany if it ever was to reach the wrong hands. When Kleo’s aunt Margot Honecker walks in to collect the suitcase, she explains East Germany’s guilt and helpless position. One would question why would Kleo let her Aunt take the suitcase in the first place. The answer is the caveat that summarizes the series on a perfect ending.

While Sven finds his 30-second window and takes quick action to make sure the documents go to the right people, Min Sun acts quickly based on his intel and hands it over to the Americans. After going behind Kleo’s back, Kleo finds out what Sven does when he slyly mentions it as a passing statement that the Aunt does not have the documents anymore. But there was a bigger reward for Kleo. She gets to meet her mother who is still alive and living somewhere in Germany.

When Kleo does meet her mother, it is a supple ending for us as well as viewers because, for the first time, we see hope in her eyes. Brigette, Kleo’s mother admits her position then and now about the decision, she took to be a socialist and be more aligned with her values that went against her grandfather’s morals at the time. She never wished to abandon her but was forcibly taken just like how Kleo was arrested.

With the Scorpion’s German translation of Winds of Change playing in the background, as an audience, we would do well to remember the historical moment in real life when they performed the song ‘Chippin Away’ in front of the Brandenburg Gate on the 21st of November, 1989. This performance comes almost 11 days after the official date of the wall coming down. It was followed by many artists celebrating this moment in history. Somehow, one can’t help but notice again the very close touch to real life when the band performed and Kleo meets her mother when the borders do not exist anymore. Could we place her story of successful assassinations of different Stasi agents between this period of 11 days marking her tremendous speed and skill?

In the words of the makers themselves, while this is based on a true story, none of this happened.