Home»Reviews»OTT»Netflix»Locked On You Netflix (2019) Review: A Goofy Family Rom-Com
Netflix/Reviews

Locked On You Netflix (2019) Review: A Goofy Family Rom-Com

Watch Locked on You on Netflix

Released as ‘Locked On You’ on Netflix, Hedefim Sensin is a Turkish language film. At one point in this film, a statue falls on top of and grabs Zekeriya. His first reaction is to ask the other on-screen character if there are any hidden cameras around. They are around and we have a delightful time watching the journey of this talkative and charming raw meatball seller who must flee Istanbul and his adventures on the island of Gökçeada.

Directed by Kivanç Barüonü aims to create a light and relaxing mood right from the outset. In the opening scene, a relaxing background score accompanies the montage which introduces Zekeriya to the audience. He is a meatball chef and vendor who fraternizes with the restaurant patrons in his own unique and eccentric manner. He leads a lonely life and all that matters to him is his serving tray.

Zekeriya manages to cause a mafia shootout and like any common citizen fears for his safety and decides to flee Istanbul. He heads off to an island in the westernmost part of Turkey. Unknown to him he has the very object that was to be exchanged at the mafia meeting. Now both groups want it back and are desperate to locate this raw meatball seller.

I make it sound like a thriller with this description. However, it is a rom-com and has characters change their nature within minutes to fit in with the unwritten rules of films in this genre. As this is a rom-com it is expected of Zekeriya to run into a girl and then bump into her repeatedly.

Leyla is this girl here. Played by Gonca Vuslateri, this character’s bubbly and confident demeanor makes her the perfect person to pair opposite Ata Demirer’s Zekeriya. This is a character who in his own words says that he is innocent but just has a big mouth. He has a puerile nature and a habit of utilizing his vocal cords which result in unfortunate and amusing incidents. He loves to speak so much that one of the characters remarks that it would’ve been better to let him continue sleeping. His desire to talk isn’t diluted even when he is lying in a garbage can after thugs hit him and his friend Hasan a.k.a. Half Hasan. Despite his nature, you can’t help but like him and root for this big baby. 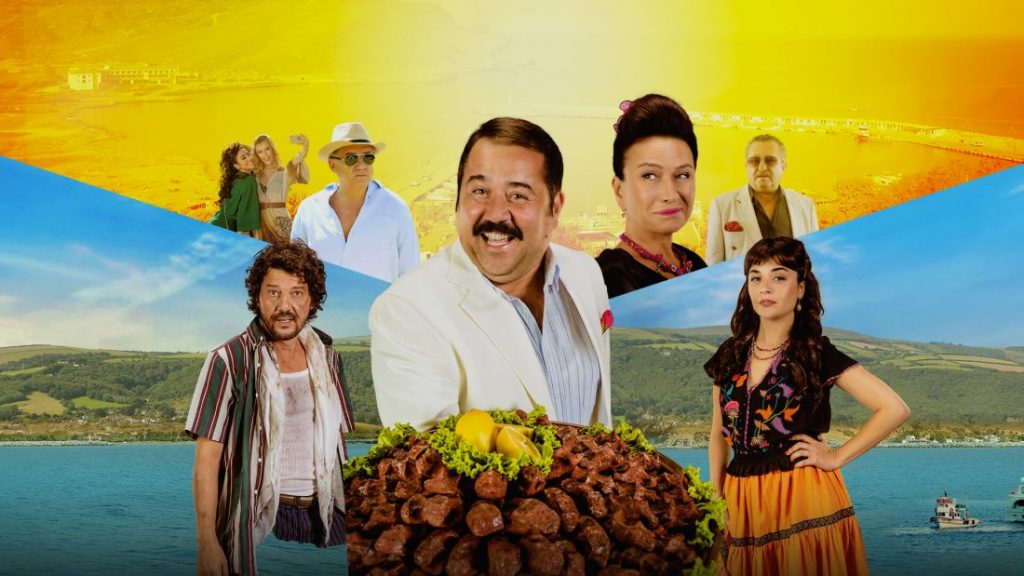 As Zekeriya seeks to begin anew on the island the mafia man Adnan who is on a cruise in the Aegean sea suffers an engine failure and by movie, logic is towed to guess where…. Gökçeada.

The supporting cast of Ilker Aksum (Hasan) and Demet Akbag (Hefize) are all unique in their way and come off as entertaining. They all play crucial roles in taking the film ahead and aren’t there purely for comic relief. Not that it’s needed when we have Ata Demirer on screen.

The film did subtly manage to educate us about the dangers of social media stories. When Adnan (a rival mafia boss) asks his henchman what stories are and why people post them? “So that others can see where they are and what they do,” is his reply. We subtly understand the dangers of life where we have the tendency to broadcast our every action on social media. We also see how pathetic it looks to a third-person observer whilst recording ourselves.

A monologue by the rival mafia man Sulsu Cavit showcases the beauty of the island of Gökçeada as it made me think that it is a travel message shoehorned within the movie as we don’t see exotic locations described in a pitch sounding like a tourism advertisement voice-over when 007 visits them in his films.

Despite its fairly quick run-time of 113 minutes, this film could have done without a few scenes that didn’t contribute to the two romances this island rom-com exists to further. There is a scene where Hafize meets a small child which serves no purpose to the story and could have been cut short. The same could be said about a daydream scene related to Hasan where he makes a gaffe in thinking of gangsters. When you see it you may attribute it to the influence of foreign cinema.

This film is an offbeat and goofy island rom-com perfect for anyone looking to enjoy two hours of leisure and serves as a good one time watch after a tiring day.

Locked on You Links: IMDb

Empathy Inc. [2019] Review - An elegant metaphor for the sordid underbelly of mindless materialism

Locked On You Netflix (2019) Review: A Goofy Family Rom-Com