Karthick Naren made his directorial debut with D-16 (2016), an average crime/thriller that was extraordinarily celebrated because of the fact that Karthick was only 21 when he made it. Taking into account the thriller genre films made in Tamil cinema (Ratsasan which was released in 2018 was of course far superior), D-16 was crafted pretty well. It had unexpected twists, which in hindsight sounds implausible. Yet its pulpy sensibilities at least worked within that narrative framework. But then Karthick Naren made Mafia (2020). There’s not much to talk about the film, except that it served as hilarious meme material for a time. Karthick’s ‘Project Agni’ is one of the two decent episodes in the cringe-fest anthology ‘Navarasa’ (2021). Now the filmmaker returns with Maaran (2022).

I didn’t expect much from the film. But sadly Maaran makes us appreciate Dhanush’s last two atrocious commercial outings – Pattas & Jagame Thandhiram. Let’s dig even deeper. Doesn’t Ennai Noki Paayum Thota (2019) seem like a beautifully understated romance? Or doesn’t Thodari (2016) comes across as a edge-of-the-seat thriller? Yes, Maaran is that kind of a ‘bad’. After watching Mafia, I understand there might have been some reluctance to declare it. However, now after Maaran we can declare it without any reservations, i.e., Karthick Naren is an absolutely lackluster filmmaker.’

The writing in Maaran is just shockingly bland. But that’s just one of the problems. If H Vinod had kept away his irritating amma sentiment and other conservative bullshits, Valimai would have been a perfect mass masala. Still, it had some great and memorable stunt sequences. Karthik Subbaraj’s Mahaan suffered from unremarkable writing, but it had quite a few interesting moments.  Maaran is out-and-out unpleasant to watch; not one interesting conflict and very passive film-making. 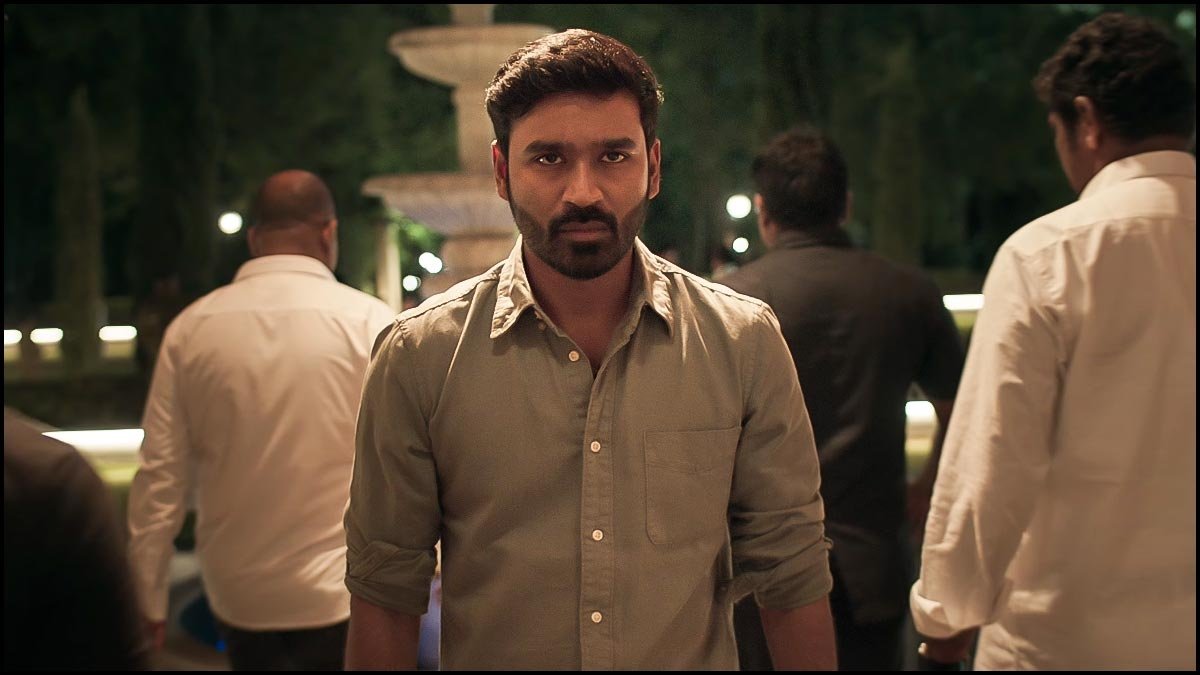 In the trailer, it was emphasized that Dhanush’s titular character is an ‘investigative journalist’. If you had expected something pulpy yet engrossing like K.V. Anand’s Ko (2011), you’d be greatly disappointed. Dhanush’s character neither does any investigation nor behaves like a journalist. Yet, we are shown that he single-handedly cracks down the cases and even makes it to magazine covers. How? Why care about that? Maaran loves telling truth to the public. And why’s that? Because his dad, before his death (one of those numerous self-righteous Tamil cinema dads, who is only there as a sacrificial lamb to give our hero a purpose) has preached Maaran to do that.

Little Maaran’s mom also dies from complications related to childbirth. Therefore, the little boy is left with his baby sister. And yeah, there’s also the template useless uncle (Another ‘Naren’ who sleepwalks throughout the film). Now, something very unique unfolds. Yes, ‘thangatchi’ (younger sister) sentiment! Finally, the grown-up Maaran lands on a journalist job by winning the battle of viral tweets. At this point, it’s important to note that everything has a purpose in Karthick Naren’s narrative. From the sacrificial lamb dad to this tweet, it points us to something. Why? Because it’s an investigative thriller, goddammit! In fact, at some point, I wondered if the chewing gums of Malavika Mohanan would play a role in the investigation. Was it a red herring?

By the way, Malavika plays the female lead. She’s the cool and independent photographer chick, who instantly falls for our hero, and later saves our hero by telling him who he is. “You are an investigative journalist”, she yells. Of course, she uses the F word while telling that. Didn’t I say she is so cool? Otherwise, there’s not much else to talk about her ‘performance’. Samuthirakani badly plays the bad politician role. Maybe, Samuthirakani is bored of doing really good roles (like in ‘Writer’) or tired of those on-screen preaching sessions. Maybe, now and then he enjoys uttering the Tamil ‘O’ word as a bad guy. That’s understandable. The bad politician……….. by the way, do we even need to say bad politician nowadays? So, the politician is the target of a sting operation conducted by Maaran. 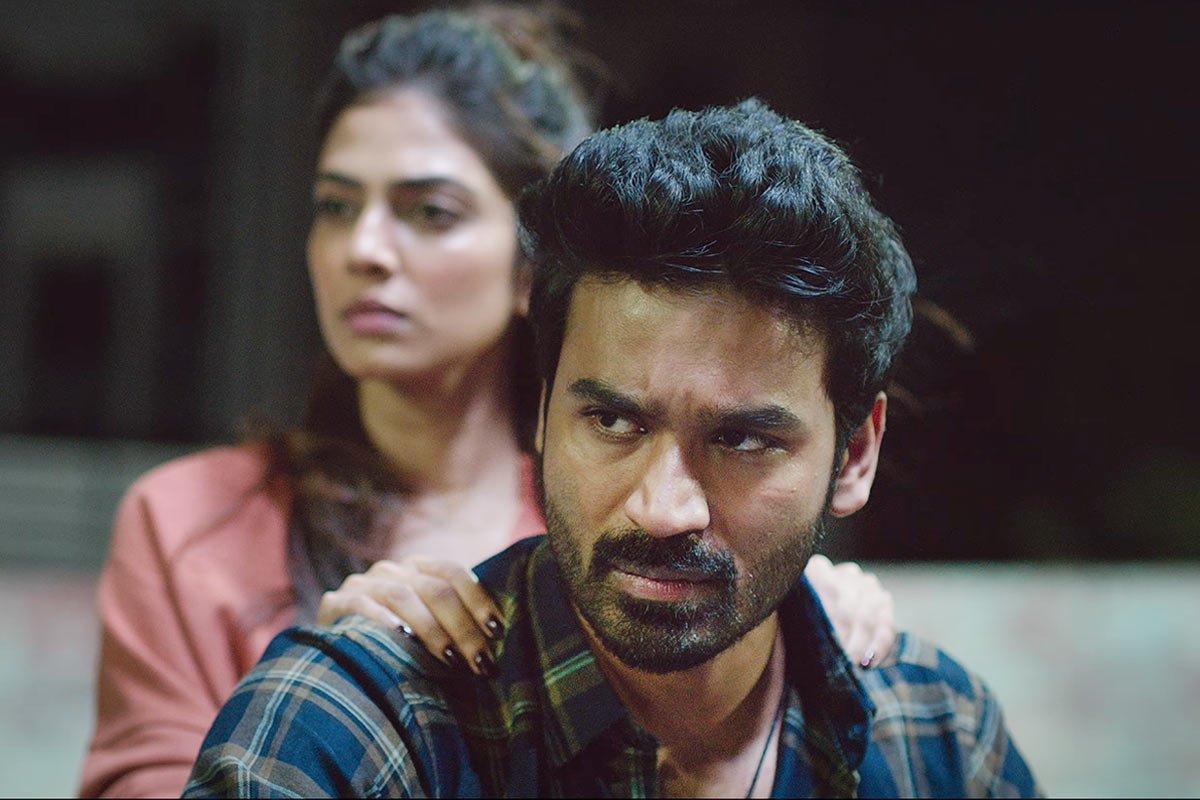 Maaran gathers all the evidence against the politician in half a day or a day and spends the rest of his time enacting the sentiment scenes with his thangatchi. At some point, Malavika’s character says, “I like you…. and I like your sister more than you.” This plot point could have been explored more. I think this would have led to a unique love story. But remember, Karthick Naren is making an investigative thriller. Hence, we get into that after the painful one-hour mark. Fire is an important motif in the narrative. I think it represents our burning rage over the tedious narrative developments.

Writer/director Karthick does subvert the formula in the last 40-45 mins of the narrative. Karthick might have felt that he is offering a ‘Se7en’ like the twist with a surprise villain cameo. But none of the twists holds ground and were very poorly executed. In fact, the allegedly menacing villain has a sob story that sounds ridiculous. After watching Mafia and Maaran, I feel that Karthick Naren binge-watches a lot of Hollywood films or American TV shows, and simply borrows certain plot elements without understanding the context. Forget about creating an emotionally resonant experience. It would have been an achievement if the staging and plotting were less cringe or conventional.

Eventually, Maaran (130 minutes) makes us think a lot; definitely not about journalism or about the scarcity of good commercial cinema. It makes you wonder how and why such projects are bankrolled.

Moon Manor [2022] Review- All heart, notwithstanding some amateurish patches