Maika – The Girl From Another Planet, premieres at the Sundance Film Festival, as the only Vietnamese film this year. Directed by Hàm Trần, Maika revolves around 8-year-old Hùng (Lai Truòng Phù), a boy whose mother dies early in the film, so he stays with his father Thanh (Ngòc Tuòng), whose repair shop is neither enough to sustain them nor pay off his rising amount of debts. Then one fine day Hùng chances upon a beautiful alien named Maika (Chu Dièp Anh), who can fight anyone with her swift, arrow-like wings whenever she senses trouble, and can also save them from many situations. Maika needs to connect back to her planet using a special kind of force that can be generated through a satellite that is now broken.

Hùng has his reasons. His best friend is gone, he is forced to find a new place to play where he almost drowns when his plane crashes. This is when Maika comes into his life, saves him, and their journey together starts. He brings her home, although his father remains clueless about his son’s whereabouts. He doesn’t believe Hùng at all, bluffing him off when he tries to tell how her ship fell on the lake the previous day and he found Maika, who is now searching for her lost friend. In the meantime other problems arise too, that threatens the track of Maika in unnecessary directions. The landlord, with his two henchmen, constantly trying to find their way into creating nuisance at Hùng’s place, or Cu Beo (Tin Tin)- the rich, asthmatic, obese child who does not get enough screentime but remains sidelined as a comic release, could have been written with more attention and care. 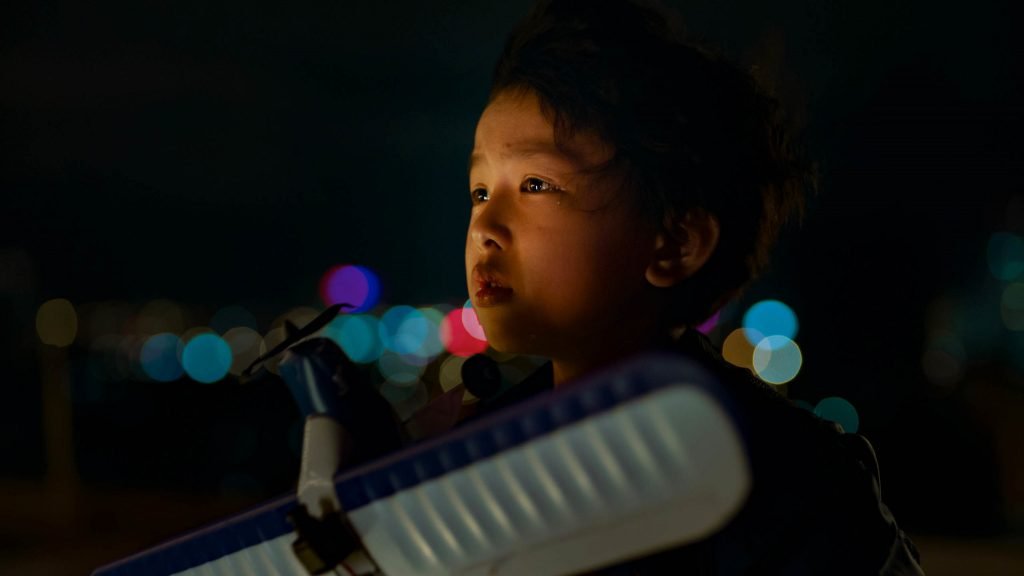 Inspired by the character in the Slovak children’s TV series Spadla z oblakov, or ‘The Girl Who Fell From the Sky,’ that aired from 1978 to 1983 and played in Vietnam, Maika is a charming and likeable creation. Director Hàm Trần, who also co-wrote the script, details the story with rich, yet everyday contextual details along the way, that make Hùng’s story chiefly his own. With so much story to tell, Maika hurries along to put more importance on plot over characters, which mostly work- given its likeable, bubbly bunch of characters that inherently ward themselves off any real trouble. The CGI, which is chiefly limited to the purple projections from Maika are well executed and do not threaten the attention of the otherwise focused narrative.

Maika suggests how real danger lies with intentions, not characters. The world of children, far away from greed, lies and illness is way more uncomplicated than those of the grown-ups. So much so that Hùng and his father, although living under the same roof, are completely detached from one another. Hùng’s father, kind and modest to a fault, do not know what to do to help himself. Not that it seems that he is trying enough- most of the time he is tending to this nurse, who flirts, but means well. In the same house is Hùng with his alien-friend Maika, trying to find a way to get her to her lost friend and find her way back home. For the longest time, his father does not even know where his son is- say unless his plane is returned by the owner of the aerospace company Cygnus. (An early scene provides background that he wants to place Vietnam’s name in space exploration.)

There’s an elongated climax sequence involving a flight-out for Maika, that does not go according to plan. Then she’s taken hostage for which there’s a surplus change of attack, that involves spilling spicy Ram-chi on the face of human impediments. Some gaping plot holes aside, Maika scrambles its way to meet its predictable conclusion. By the time director, Hàm Trần sorts out the loose ends, the film becomes a tad too overlong and overcooked for its good. It still works mainly for the fuss-free performances from its child actors, who know the kind of movie they are in and deliver. Maika is a charming, if for its good- slightly overwrought, entry into the fantasy genre that will work wonders for child audiences worldwide.