Home»Articles»Modi And A Beer (2020): The Micro Politics Of Dominations
Articles/Essays

The short film directed by Dina Chandra Mohan, “Modi and a Beer”, presented by Pa Ranjith’s Neelam Productions was released on YouTube recently on June 1, 2020. The film discusses its politics through the unfolding dialogue between Sruthi and Arun, a couple in love representing distinct caste identities, who are preparing to get married with their parents’ consent. The film runs its course within the ambit of their dialogue. The narrative takes off, as Arun enjoys his ‘last’ beer bottle with a vegan and teetotaler Sruthi, who had persuaded him to quit drinking. However, in no time, the innocent chitchat develops into a power- related tugs of war.

The initial visuals of the film themselves convince the audience about the upper hand that the Tamil Brahmin heroine has over the hero hailing from an OBC community. The forced abstention from alcohol and his transformation are a part of preparing him for the marriage. We see the hero cancelling his order for his favorite beef dish, solely considering her dislike (although she doesn’t express it verbally).

“One of the merits of alcohol is that, it dissolves the systems. It creates a predicament whereby it becomes impossible to lie after thinking twice. We are determined that a liquor shop must be a hundred meters away from civilization, because it can otherwise expose the fragile truths of a community. Is there anything we detest like truth?”- asked Prof. M.N. Vijayan, one of the key thinkers in Kerala as he addressed the issues of liquor, drinking, society and truth. A holistic analysis of the film is incomplete without considering the potential of liquor to enable a drinker for contemplation and momentary escapades. In other words, it won’t be an exaggeration to say that alcohol becomes the driving force of this conversation which has political undercurrents. It is the ‘production of an other’ in Arun, by virtue of intoxication, that wins over Sruthi’s keen efforts to end the friction in discussion; and thwarts Arun’s deliberate efforts in establishing harmony.

The hero’s actual self hops out like a rabbit within few minutes into drinking. Sruthi captures a video of Arun promising, to quit drinking, over the last beer bottle. As Arun expresses interest to view the video, Sruthi passes him the mobile phone; but to her dismay, he continues to scroll over even after watching the video. She snatches the phone from him. At a later point, in a critical juncture of this dialogue, we see Arun expressing the same eagerness to poke his nose into her privacy. He is at the verge of moral policing her private and social life. Sruthi instantly recognizes his conduct as an encroachment into her personal space and sees through his delicate progressive-feminist trappings.

Dina Chandra, the director-cum-playwright of the film seems to have detailed the characters as two individuals who are only half- formed in their political outlooks. However the problem at hand can hardly be solved, in spite of their formation as political beings alone. There is a character in S. Hareesh’s anthology Adam, who laments that- ‘on having an illicit sexual congress with a so called beautiful woman (as per the accepted norms of beauty and curves) a man is thrown into an aporia- of keeping it a secret, overpowered by an urge to gossip for want of satisfaction. This issue makes the female body/ beauty a site replete with winding paths of discourses. 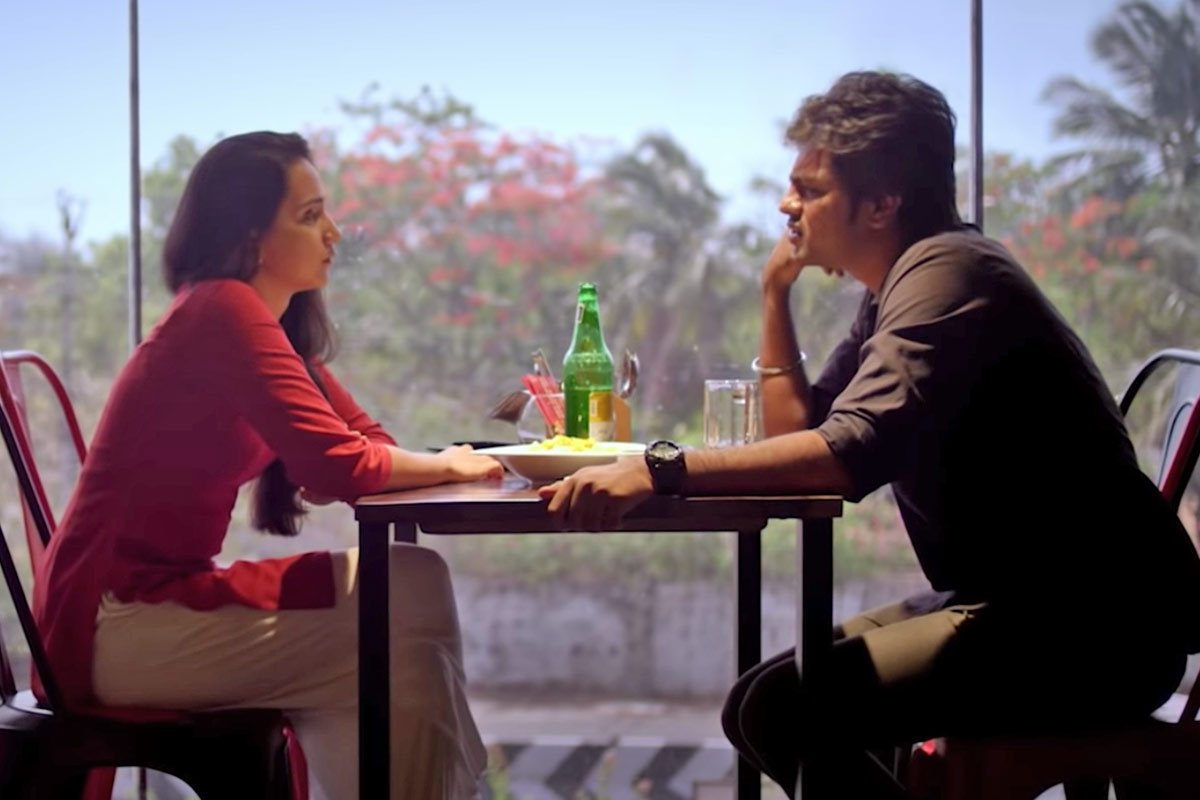 These complexities can be unfolded using the concept of ‘Cultural Hegemony’ put forth by Antonio Gramsci. He presents the idea as a variant of Marxist thought, which says a dominant ideology is that which reflects the belief systems and interests of the dominant class in a society. Gramsci declares by virtue of his theory that the values, ideas and dreams disseminated by the social institutions continue to function in the society as the intellectual force apparatus, strengthening the world view of the dominating class and thereby setting the wheel of cultural hegemony in perpetual motion. This concept is universal unlike most other Marxist analytical tools. In Pradeepan Pambirikkunnu’s work analyzing food culture, clothing, festivals and other symbols, one can find the reverberations of Gramscian analytical model. Pambirikkunnu analyses how Set Mundu/ Set Saree became the common wear of Malayali women and Sadya (Kerala meals) the accepted food of Kerala. He interrogates who own/ owned these cultural symbols. He maintains that the cultural rationale behind such generalizations is clearly domination.

Here we have to problematize the ‘dominant aesthetic sense’ which has influenced the society. Contrasting with such tendencies is the only plausible way to examine a subaltern male’s upper caste insecurities (which also in effect, outrages womanhood and democracy). In a space where elite aesthetics is established as universal, an individual with such a physique is deemed invaluable. This pricelessness makes it a covetous property fit to be robbed anytime! Once lost, it will be a tedious task to find another of same value- is the state of submissive insecurity latent in a subaltern male’s ambiguous conduct as opposed to his inner self and modesty. A masculine sense regarding social acceptance is also at work here. The problem of partner-centrism and societal acceptance are visible in Jayamohan’s novel “Nooru Simhasanangal”. There, the protagonist who climbs up the rungs of class and social value, chooses an upper caste woman as his partner in hope of improving his ‘cultural status’ as well. The ‘rise’ dependent on other by virtue of marrying an upper caste woman is suggested in this film too. In that case, Arun’s ‘selection’ has a social dimension (Sruthi argues that it was Arun who stalked and followed her continuously on social media platforms).

Power conflicts reach its peak and manifests fully, as the dialogue revolves around marriage. Sruthi says, “I never imagined that ‘my family’ would say yes to an inter-caste marriage”. This statement spites Arun, who feels she had insulted both his family and community. He understands it as an expression of ‘caste pride’ alive inside her. While we can reckon in her reaction, the trivialization of consent from groom’s family, what drives Arun to protest, is his patriarchal mindset. He can’t stand a woman belittling him, despite of his loss at the face of her comment, “Won’t your family hesitate to palm off your sister to someone beneath your caste? ”.

However when it comes to Reservation, the hero is more rational, unlike the heroine. Arun criticizes Sruthi’s idea of reservation as a mere poverty eradication project and enlightens her that it is an affirmative help deserved by people who have been denied rights for generations. Unfortunately, the same hero fails miserably as the discourse develops into the terrains of caste oppression. He is blind to the injustice his community directs towards the ‘lower’ communities, and puts up a feeble argument that the whole issue of casteism is a Brahminical product. It shows the shallowness of critique and self criticism in both individuals.

By the close of this dialogue/ short film, we have a heroine who walks out of this relationship. She is provoked to this end, on being doubted of her virginity. We hear her proudly saying that she had not slept even with Arun, her fiance. Dina Chandra, in his interview with ‘The News Minute’ had mentioned that this statement by heroine is indicative of a puritanical notion widespread in the society. He goes one step further to add that physical proximity might have lessened the frictions in their bond.

Similar Read To Modi And A Beer (2020): Nasir Review: Living A Life Under Religious And Communal Bigotry

The foreword of Modi and Beer is E. V. Ramaswamy’s words- “The way man treats women is much worse than the way the higher-caste treat the low-caste, and the landlords treat the servants”, which is sufficient of generating a prejudice in the audience. Periyar’s statement cannot be given a direct reading in the present day context, neither can it be conceived as a doorway to the film (a film produced and its readings could be mutually exclusive). Therefore it will be better to enter into the sensibilities of the film totally ignoring the foreword. I understand the film experience as an opportunity to disentangle the multilayered conflicts of mutual domination. In this modern times, when domination is being understood as even an organic trait in homo-sapiens, let us sincerely hope the creative expression of such complexities will reprimand the utterings of simplification.