Ms. Marvel (Season 1), Episode 4 Recap & Ending Explained: After perfectly setting up things in the first two episodes, Ms. Marvel decided to not beat around the bushes and actually revealed a substantial amount of things. One of the major reveals was showing Kamala’s grandmother Aisha in a flashback sequence which was tying up the bangle with her disappearance thus establishing a bridge between the past and the present. The full-fledged introduction of Clandestines and them being the villain (taking a different route from the comics) was also a high point of the episode which ended with a cliffhanger where Nakia finds out who Kamala really is.

This week’s episode does touch that cliffhanger a little, but Nakia and Bruno take a backseat as the story goes to Pakistan with Kamala and two new characters, Waleed (Special guest star Farhan Akhtar) and Kareem (Aramis Knight) are introduced and they seemingly blend in the narrative.

The usual MCU intro music is missing again and is replaced with another Indo/Pak-themed musical piece which goes very much in sync with the show. The episode opens inside a flight where we find Kamala is traveling to Pakistan with her mother Muneeba. We see Nakia is texting Kamala but for the time being Kamala chooses to ignore that. Things between her and Muneeba are also not good as Muneeba is mad for ruining her brother’s wedding.

In Sana’s house, Kamala is amazed to see Sana’s painting, all of which depicts some aspect of the India-Pakistan partition and Sana mentions that’s how she has been coping with all the trauma she had in her life. She also shows Kamala a picture of Hasan (Fawad Khan), her father, and a painting of her mother Aisha. Kamala then asks her why she would send her the bangle and Sana reveals that she is aware that Kamala is a Djinn. Kamala is shocked to see how casually Sana approaches this whole thing to which Sana says it’s just a genetic thing she does not really see any fuss regarding this and her real reason for asking Kamala to come to Pakistan is she believes that Kamala needs to be with her in order to find out the bigger mystery related to the bangle and also Aisha. 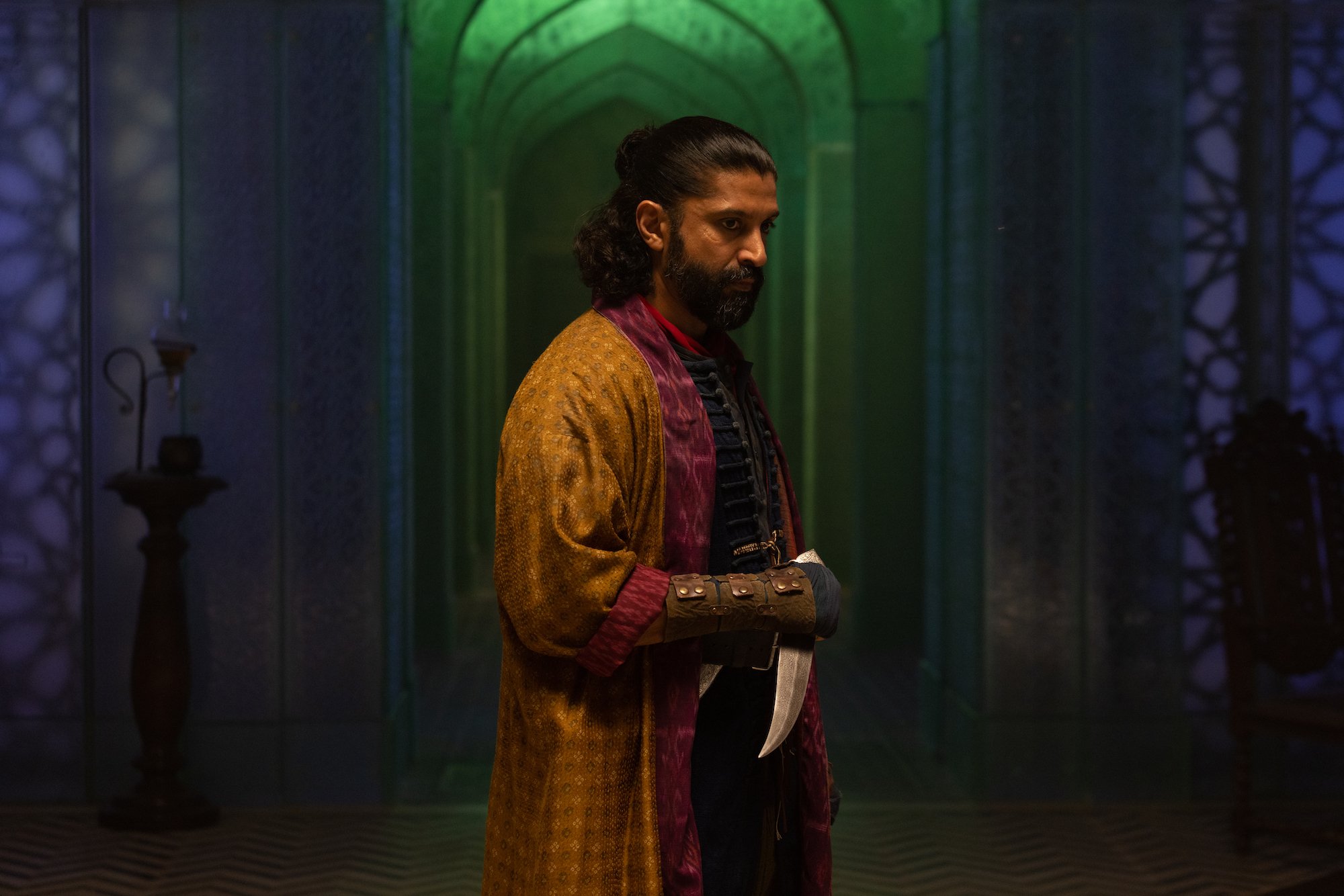 As planned before, Kamala and Muneeba go out with Zainab and Owais for lunch at the boat club where Kamala struggles with the extreme humidity, especially because of wearing Jeans, tries Panipuri, and finds those really spicy for her taste. Muneeba leaves for the way and Kamala explores the busy streets of Karachi with her cousins. Zainab and Owais make fun of her Americanness but Kamala does not seem to bother much. She asks them to take her to the train station. They get surprised to which Kamala says she wants to visit the station for its historical value as that was the gateway of her grandmother coming to Pakistan. However, Zainab and Owais leave and Kamala finds her way and reaches the station alone. At the station, a masked guy (Aramis Knight) attacks her with daggers but Kamala uses her power and manages to hold him off. However, the guy doesn’t seem to be hostile and tries to befriend her. As police arrive, Kamala, runs away with the guy from the station.

The guy introduces him as Kareem, a member of the red daggers who are a group of masked people fighting crimes while staying in the shadows. He takes her to a seemingly ordinary restaurant but in the back of it, Kamala finds herself in a spectacular-looking place which is the Home of the red dagger. The leader of the group, Waleed (Farhan Akhtar) introduces himself to Kamala and tells her how her grandmother’s story is legendary, hinting that Aisha had connections with this group. He explains to Kamala that another world exists parallelly with the world they are in and the Clandestines and Aisha are from that world. He shows Kamala a hologram where he further explains how the Clandestines are trying to lift the veil between the two worlds with the help of the bangle and the eventual outcome of that is the other world completely destroying the world they are in, and that is why Kamala must protect the bangle. Kamala is amazed to know all this and shows Waleed the bangle where Waleed reads an inscription that says “what you seek is seeking you”. He says he doesn’t know what that means in this context but it must have been important to someone.

Meanwhile, in the Department of Damage Control Superman, the Clandestines somehow manage to beat up the guards who were detaining them and manage to escape. But Najma decides to leave Kamran behind at the last moment.

The story goes back to Pakistan again where Kamala comes back home and meets her grandmother on the rooftop. Sana asks if she has found whatever she was looking for to which she replies it’s a bit of an education. Sana mentions how she keeps trying to realize who she really is with her Pakistani identity and Indian roots and gets pensive. Kamala receives a text from Kareem and goes to hang out with him and his friends and has a really good time eating biryani around a bonfire.

At home, Muneeba and Sana argue over her fantasies of Sana regarding Aisha according to Muneeba, and how embarrassing that has been for her which eventually made her leave and go to America. Sana however continues to defend her story and visibly gets disappointed with her daughter. Kamala returns and sees her mother sitting alone and sad. Muneeba asks if Kamala had fun with her cousin to which Kamala lies. They share a toffy together and the scene fades away.

We find Kamala back again in the Red Daggers hideout and trying the limitation of power with Waleed and Kareem. Waleed gives her a piece of fabric that is no Superhero costume but resembles her culture and roots. Meanwhile, the Clandestines appear and attack the three of them. Waleed, Kamala, and Kareem run and try to get away from the Clandestines in an elaborate, beautifully choreographed chase sequence around the congested roads of Karachi. While Kamala and Kareem try to hide from them Waleed, being a skilled fighter takes on the Clandestines and fights them off but then gets stabbed by Najma and dies. Instantly. Kareem realizes that they can’t save Waleed and tries to save Kamala and the bangle. They ultimately end up in a marketplace where they get surrounded by the Clandestines. But as Najma tries to take the Bangle from Kamala a huge energy burst comes out of it and Kamala finds herself transported to the night of partition which her Grandmother keeps talking about. 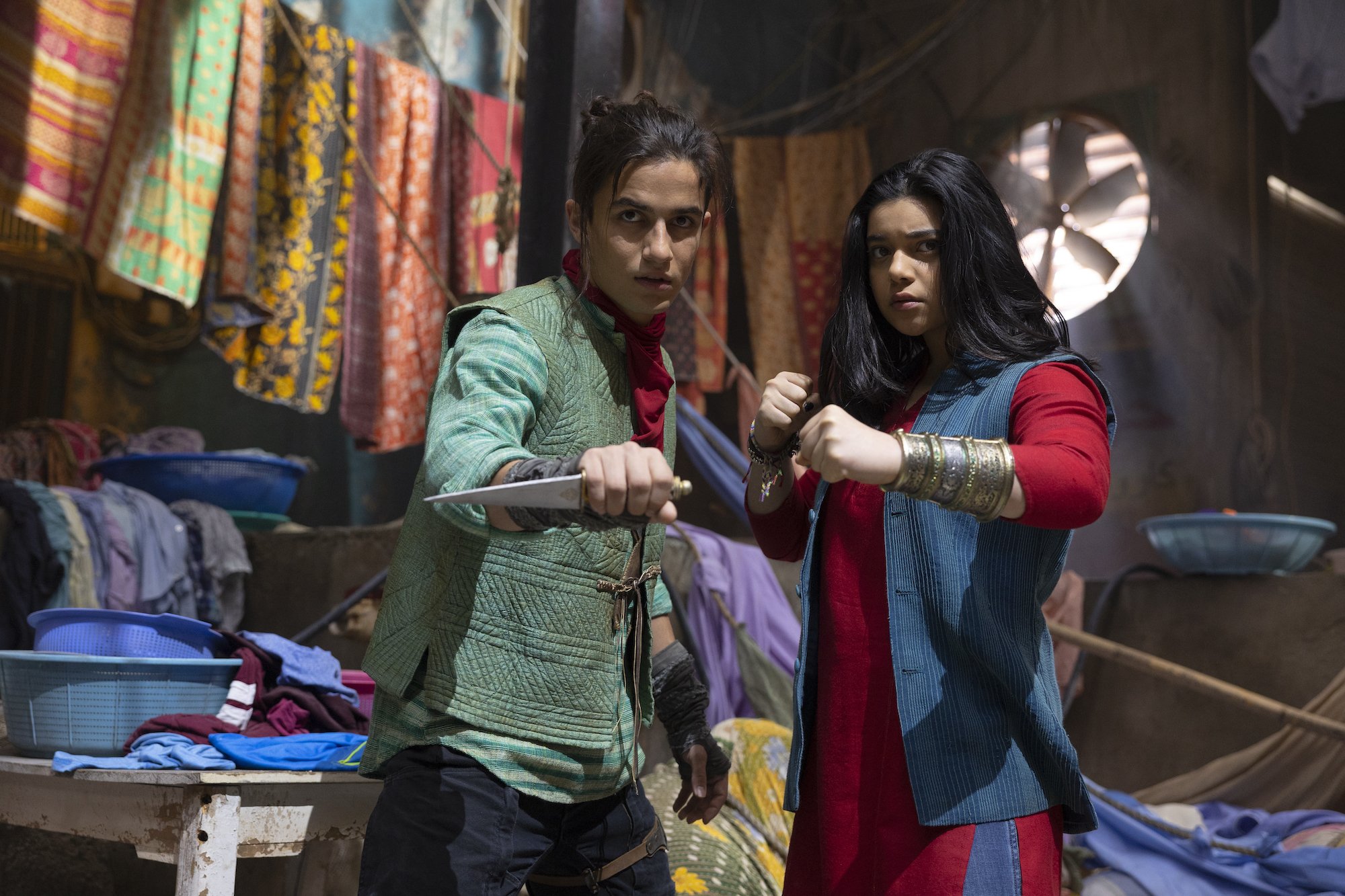 Let’s talk about the final scene first. Kamala literally time-traveled thanks to the bangle. While Sana’s following a train of stars and getting back to her father on that night of partition right before the last train leaving previously suggested it was Aisha who helped her daughter, now with this twist it might as well be Kamala herself helping her grandmother with her superpower.

The red daggers from the comics get a proper introduction here with both Aramis Knight and Farhan Akhtar managing to make a strong impact with whatever little screen-time they have. Kareem’s character is obviously a prominent one in the comics and one of Kamala’s biggest allies and is most certainly going to appear in the remaining episodes.

One of the biggest mysteries of the show is Kamala’s great grandfather Hasan. While some things about Aisha have been revealed, none has been revealed about him. Considering MCU has caet someone like Fawad Khan to play that it must be important and the next episode is probably going to give us more of Hasan and the backstory.

The true origin of the bangle and how Aisha got the hold of it is yet to be revealed but that being a product of advanced skrull (or Kree, who knows?) technology still remains a strong possibility considering Captain Marvel tie-up in mind. There is no mention of the Inhumans yet but that also remains a possibility.

With only two episodes left, we will definitely know further about everything by next week.