Mexican film-maker Alonso Ruizpalacios’ debut feature Gueros (2014) portrayed the disintegration of a society and the ennui of suburban life through the perspective of carefree, rebellious youngsters. That film was set in the backdrop of 1999 massive university students strike against cutbacks and tuition fees. With his second directorial effort Museo (‘Museum’, 2018), Ruizpalacios goes further back in Mexico’s recent history to effectively dramatize a real life crime story. Museo is set in the year 1985, the year when a severe earthquake (8.0 on the Richter scale) caused great damage to Mexico City, claiming at least 10,000 lives and injuring more than 30,000 people. As the Mexican people were slowly picking themselves up from the devastation left in the wake of a September-month earthquake, there was a robbery at National Museum of Anthropology (7th largest art-museum in the world) which was circulated as a threat to the entire nation’s cultural heritage (nearly 150 invaluable artifacts were stolen). When people flocked into Museum’s gallery space to eagerly see the empty cases, the stolen arts gained new importance and so did the idea of patriotism/nationalism that was allegedly linked to the preservation of these historically significant artifacts. Though the stolen pieces were recovered and the culprits apprehended it is the social, cultural, and philosophical attributes of the incident that has driven director Ruizpalacios to the script of Museo, initially written by Manuel Alcala.

Museo has some thematic connection with 2018’s another odd ball heist film titled ‘American Animals’. Directed by Bart Layton, American Animals was based on the inept real-life ‘rare-book heist’ carried out by four college-going boys. On one hand, the film destroys the myth of slick heist (epitomized by films like ‘Ocean’s Eleven’) and on the other hand it lays out the confused ideals, insecurities, misplaced dreams, boredom, self-centeredness, and toxic friendships afflicting the American upper middle-class kids. They are portrayed as fundamentally good kids who seek respite from their ‘normalcy’ in the most stupid and superficial manner possible. Rooted in the same spiritual construct, Museo ponders over the uneasy question of ‘why they did, what they did’, while also commenting on the idea of national heritage that’s projected into the ancient, bizarre statues and tombs.

Mexican star Gael Garcia Bernal played the role of an idealistic young guy in Alfonso Cuaron’s raunchy yet moving comedy ‘Y Tu Mama Tabien’ (2001). Now the 40-year-old actor once again convincingly plays a lovable slacker (looking almost ageless) named Juan Nunez, who is pursuing veterinary medicine for too long. Juan is the son of a prominent physician (Alfredo Castro). Their family lives in the comfy corners of Satelite City suburbs. Earlier in the movie, as the family prepares for Christmas Eve, Juan rants about his yearly role to play Santa Claus (he calls Santa, ‘a tool to indoctrinate children into capitalism’). Juan views everything associated with his extended-family (of sisters and their kids) as distasteful. In response, the family largely treats him as a loser and one of them in the Christmas dinner playfully accuses Juan of ‘jerking off too often’. The guy only seems to connect with Benjamin Wilson (Leonardo Ortizgris), a hapless life-long friend who also serves as this story’s narrator. 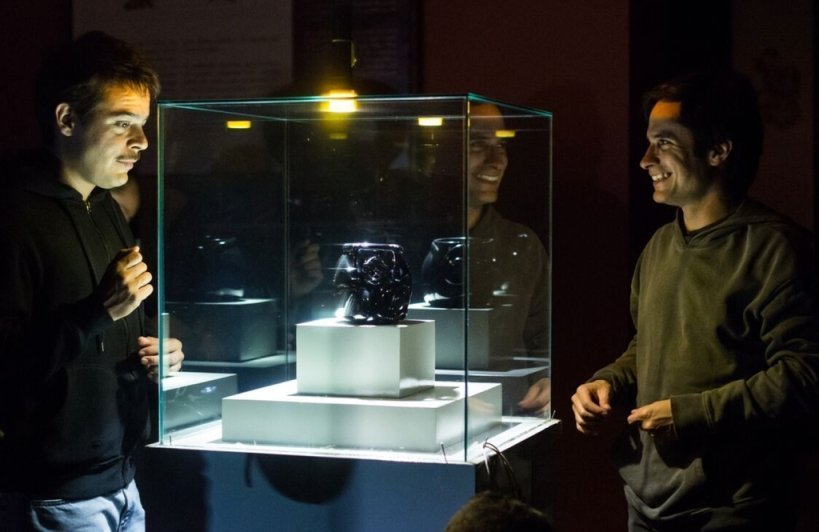 Museo thankfully doesn’t spend much time in drawing out the reasons for Juan’s plan to rob the museum. Through Wilson’s voice-over, director Ruizpalacios evokes an atmosphere of world-weariness that we naturally assume what’s going to happen. The heist itself is brilliantly shot, delineating the logistics and trickeries essential to snatch the artifacts through tense snapshots, reminding us of old-school heist-flicks like ‘The Asphalt Jungle’ (1950), ‘Rififi’ (1955), etc. Once after gaining access to the treasure trove of Mayan artifacts, Juan and Wilson set off in a journey to drop off their precious stash. Meanwhile, the museum robbery turns into a big national news, making it impossible for the young thieving partners to fence the most recognizable art pieces in Mexico. The depth of the duo’s foolishness is sharply laid out by a high-flying British art-dealer Frank Graves (Simon Russell Beale in a wonderful cameo).

Museo portrays plenty of cultural and moral complexities without providing any easy answers to them. The film opens with the 1964 archival footage, which shows the relocation of massive ancient statue head of the god Tlaloc from its centuries-old home to the then new National Museum of Anthropology in Mexico City. The voice-over says, “They wanted to fill the new museum with new things”, equating the relocation in itself as an act of thievery by the government. In fact, the staid and majestic anthropology museum is seen as a hypocritical symbol of bourgeois white-Spanish society since much of the artifacts displayed in glass cases are taken away from Mayan kingdoms and other indigenous people of the land. Director Ruizpalacios also smartly relates the modern Mexico’s insecurity over its historical identity to Juan’s own identity conflict. Juan actually seems deeply informed about the artifacts and architectures of Mexico’s indigenous population that we wonder if his actions are result of his anarchist belief to re-appropriate the arts to its rightful owner. The commanding Frank Graves talks about the discovery of Spanish conquistador vessel by an American expedition, which contained half-billion dollars’ worth of Peruvian gold. Since the three nations claimed ownership on the precious cargo, Graves comments on the enigma surrounding this question of rightful possession. But Ruizpalacios injects a healthy dose of ambivalence, making it hard to decide whether Juan is an idealistic dissident or just a clueless, bratty kid.

Just like in Gueros, film-maker Ruizpalacios zeroes-in on the ennui afflicting the suburban youths whose thirst for revolution he says might be compromised by their bourgeois vantage point. Gueros and Museo could pretty much be termed as the repercussions of chasing the ‘misguided dreams’. The director further represents this theme through his protagonist’s obsession for pop icons. In Gueros, it was a legendary musician and in Museo, Juan’s idol is a (fictional) erotic performer named Sherezada. Juan’s failure with his misled dreams echoes when he meets his idol Sherezeda (Leticia Bredice); the woman is as defeated and lost as Juan, shattering the young man’s yet another idealization. These fanciful episodes towards the end of the narrative might look a bit far-fetched although it adds to the story’s themes.

The film also definitely worth watching for its visual fluidity. Ruizpalacios incredibly weaves the weighty themes while also creatively pushing the cinematic envelope. Be it the split-screen heist sequence or the tranquil shots of guided tour into the Mayan pyramids or the dream-like fight in the raucous night-club, the director lends his distinct light touch to keeps us engaged throughout the varied journey. Bernal effortlessly depicts his characters’ turbulent interior life, allowing viewers to easily relate with the microcosm of Juan’s world with the bigger, conflicted identity of Mexico. Moreover, Bernal and Ortizgris rightly presents the imbalanced power dynamics and the deep affection that drives the friendship between Juan and Wilson.

Museo (128 minutes) is an artfully composed drama that uses a real-life, half-assed heist to intriguingly reflect on the fraught identity of a nation, culture, and an individual. The real achievement of the film is the way it balances between important ideas and visual inventiveness without overdoing either.