F**king Mexican cinema. They grab a bunch of beggars, shoot in black-and-white and say they are making art films. And, the f**king directors, not content with the humiliation of the conquest, go and tell the French critics that our country is full of pigs, derelicts, sell-outs, diabetics, whore-mongers…….

……says Sombra, a primary character in Mexican filmmaker Alonso Ruizpalacios’ fourth-wall breaking, poetic, black-and-white slacker movie “Gueros” (2014). It is both a humorous and subtly tragic moment in the film that pokes at the Mexican director’s’ dilemma in portraying the disintegration of their society on the ‘taxpayers’ dime’. Yes, Ruiz Palacios’ work ticks the boxes of black-and-white (shot in 4:3 aspect ratio), art-house cinema, and may appease the European critics, but it’s not about a crime-riddled Mexican society. It is a satirical, free-floating movie that’s more about rebel, deadbeat dreamers, who seem to have a lot in common with the mythical, carefree young guys of Godard, Truffaut, Jim Jarmusch or Alfonso Cuaron.

The meaning of the word ‘Gueros’ is defined before the movie rolls on. It means ‘light-skinned people’ (a derisive slang), and so there might be a thought on the back of your mind that it’s about racism (and the resulting class divide) in Mexican society. Yeah, it touches that subject with a dash of deadpan humor. Actually, the sensational social commentary in “Gueros” peacefully unveils in the background, while our attention is grabbed by the witty, expressionistic images. The movie is set in Mexico City, 1999, the year in which the students of UNAM – a humongous national university – involved in a lengthy strike over raised tuition fees. However, two of the students, Fede (Tenoch Huerta) aka Sombra (means ‘Shadow’ to indicate the dark-skin) and Santos (Leonardo Ortiz Gris) are on ‘strike from the strike’. The duo is living aimlessly, in their disheveled apartment, listening to students’ pirate radio (hosted by Sombra’s crush Ana), and stealing electricity from the flat below. Soon, they are joined by Tomas (Sebastian Aguirre), Sombra’s ‘light-skinned’ younger brother. 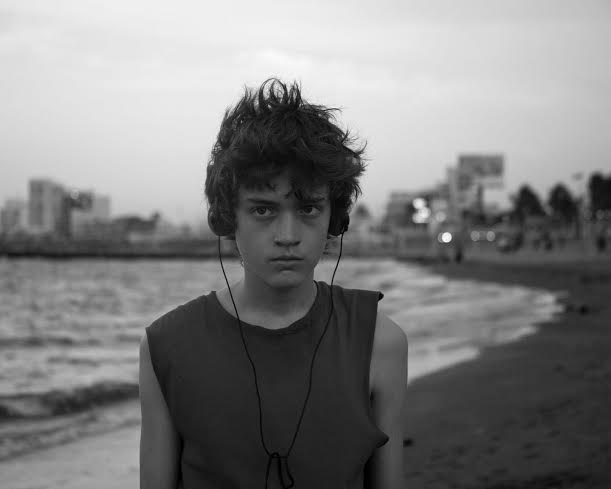 Tomas had got into trouble in his hometown Vera Cruz, and his lonely mother just can’t put up with his antics. The trio is later forced out of their apartment due to another trouble, and unanimously decides to search for Epigmenio Cruz, an old singer whom the brothers’ absentee father liked and whose songs even made Bob Dylan cry (Tomas is also swept away by Cruz’ voice). Like a road movie, the trio appears in random episodes, experiencing different aspects of the city, while eventually getting into the heart of the students’ strike (the university). There they meet the charismatic Ana (Ilse Salas), a student leader, whose piercingly beautiful eyes flutter when meets up with Sombra’s hallucinatory eyes. The quest resumes as the quartet wanders through parts of the radiant city, not previously acquainted.

The most positive aspect of writer/director Ruiz Palacios’ script is that you don’t need to be aware of a particular Mexican era or need to possess a dense cinematic knowledge about New Wave French films to connect with the ineffable journey of these people. The characters are written as tangible persons of the pop-culture (similar to the way director Linklater’s characters behave). Their yearnings and disintegrated dreams aren’t burdened with the occasional post-modern self-references or flashy surrealism. The film could be simply read as a journey of youngsters, living within an emotional bubble that bursts out as they encounter friendship, brotherhood and even vehemence. Of course, Ruiz Palacio designs the narrative to be anything but simple. He turns the situations tense in an instant: wind-shields are shattered; gang of neighborhood kids poses a threat; a frantic students’ meeting & protests, etc (it reminded me of Scorsese’s “After Hours”). 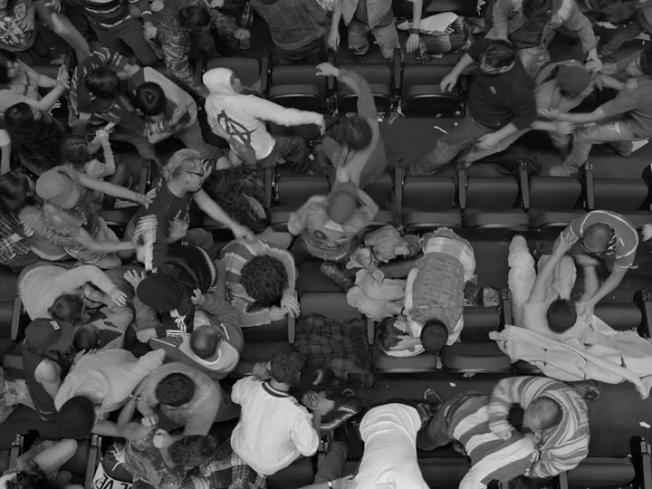 Those who feel that a movie’s task is to just tell a story may find the juxtaposed turbulent & poetic episodes as underwhelming digressions. But, I felt it is these unconnected poetic visuals and the choice to not confine the narrative into three-part structure, makes Gueros to stand out in the crowd. The stylish camera movements and excursive observations on everyday lives reminisce of Alfonso Cuaron’s works (especially “Y Tu Mama Tambien”). Ruiz palacio & cinematographer Damien Garcia goes for extreme close-ups are lyrical: Santos scratching his spotty feet; Sombra’s panicked eyes; devouring lips of kissing lovers. However, the blissful poetry comes when the camera just slows down and gazes at faces or simple objects (like the freeze frame shot in the garden; Ana putting on lipstick or the final shot). Despite all this visual poetry, debutante director Ruiz Palacio offers us insightful conversations and stirring contextual moments.

Is “Gueros” an empathetic depiction of inconsiderate youths? The film opens with a nervous young woman, packing up things and pushing her baby in a stroller. In the streets, the baby is hit by water balloon (Tomas little prank). The woman is never again seen but that inconsiderate act sets off Tomas’ journey. Later, a similar incident recurs and once again a youth, caught up with his petty adventure, changes the situation (and let’s also take into account the finger-pointing fight of striking students) . Is it about positive, emotional breakthrough of an apprehensive individual? Is it about young man’s connection with artwork and the resulting disappointment with the man behind it? Or is about people ‘staying in the middle’, whose lives are stampeded by compulsive factions? Whatever Gueros is about, it would [at least for me] remain as one of the most invigorating, perceptive foreign-language cinema of the decade.