In Natsamrat (The Emperor of Theater), which is a Shakespearean tragedy of the highest melodramatic order. Things have been placed in such honest manner that their similarities pave way for a little applause nonetheless. Bolstering with a soulful, devastating and deeply satisfying performance by Nana Patekar, the film leaves a mark in spite of its roaring run time.

Mahesh Manjerekar‘s Natsamrat is about a man, a veteran stage actor who accounts his life. His  whole world’s a stage yet his despair is real. Also, his grief being presented to an audience will never be satisfied. The irony here is, Mahesh Manjrekar‘s sincere effort just might be the redemption he wanted out of his outburst. Based on the acclaimed play by Kusumagraj , Natsamrat is about an artist and his struggle to find a proper home after he says goodbye to his love for the stage. In a long monologue that goes on as the curtains close to Manjerekar’s film, we see the protagonist requesting us to take a part of his identity with them. He also notifies that their existence becomes a part of the audience and hence they become immortal.

I don’t believe that Manjerekar’s film will be immortal if it passes the test of time, but Nana Patekar makes sure that you take home a part of his lengthy career for the numerous roles that simply wouldn’t be the same if not for the energy that gushes out of his flaming persona. The film has impeccably written dialogues that aware you about the value of a platform for an artist. The way the film transitions from one point to other, taking you through the various layers of Baghban told in the good old fashioned style reminds you of the happy smile that Bollywood films of the 90s left on your face. 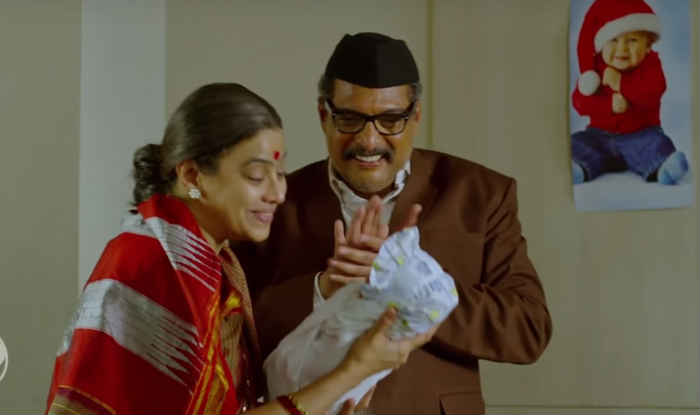 Natsamrat is about a man who not only entertains but intrudes and hypnotizes the people around him and then there are other times when he simply can’t function in the world changing himself according to the odds of the closest people in a society. His free-spirit and strange sense of vulnerability is only understood by the better half who he calls Sarkar (Medha Manjrekar) & the very notable friend Rambhau ( Vikram Gokhale ) who has been give his own sense of ambiguities to make him equally grounded. Patekar’s chemistry with both these characters are electrifying. Two staged scene with both of them are particularly phenomenal.

For a larger chunk of the film we see the protagonist scorching past his memories on a stage that he has dedicated his life to. The broken theater and the wretched stage takes him through the various normal, abnormal and abysmal stages of his life right from the point he decides to leave it. Natsamrat doesn’t show Ganpat facing extraordinary circumstances because even though he has take up a large part of his life devising new roles, he has always been a simple family man to whom his daughter & granddaughter are like sparrows.

Manjrekar‘s film is not perfect. The film is entirely predictable and there are a couple of times when you just wait for the tragedies to strike, which follow at a very convenient and systematical manner. Hence the screenplay, that’s full of amazing dialogues lags into stretched fields occasionally.  Yet, Natsamrat is a  heartbreaking tale that tells us how the search for a home brings in grief. It shows how conspirators stab you in the gut and the most unkindest cut of all is the one that’s given by the most trusted and closest ones.