Prolific Japanese filmmaker Takashi Shimizu’s Ox-Head Village (2022) is said to be the third in his series of haunted village movies. The first two movies of this ‘Village Trilogy’ were Howling Village (2019) and Suicide Forest Village (2021). Apart from the Grudge movies, Shimizu’s only interesting horror movie was Marebito (2004). He also made the charmless live-action adaptation of Kiki’s Delivery Service (2014). Nevertheless, Ox-Head Village is a decent horror film with few well-crafted scare sequences and incorporates an eclectic mix of terrifying myth, grim social reality, and cultural beliefs.

In the wake of Hideo Nakata’s Ringu (1998) – based on Koji Suzuki’s 1991 novel of the same name – J-horror became a cultural phenomenon, gaining transnational popularity. Ringu was followed by Kiyoshi Kurosawa’s Kairo (Pulse, 2001), Nakata’s Dark Water (2002), and Takashi Shimizu’s Ju-on: The Grudge (2002). The latter became one of the most successful horror franchises. The wrathful spirit shown in Ringu or Ju-on was part of the Shinto beliefs and its layered structure of the spirit world.  Though the resentful ghost stories became popular with J-horror, yurei (ghost) films have been a staple element of Japanese cinema from the early days. Traditional religious beliefs, kabuki theater, literature, and the rise of militarism have all influenced Japanese ghost cinema. 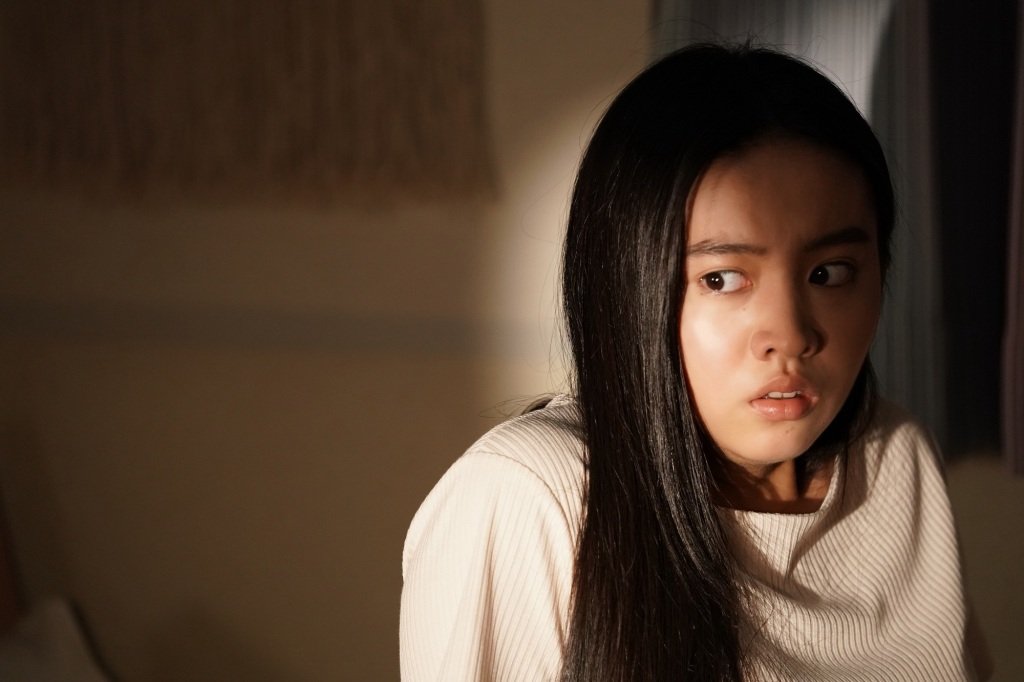 At the same time, some of these early ghost films from Japan didn’t perfectly fit into the horror genre. Keisuke Kinoshita’s Ghost of Yotsuya (1949), Kenji Mizoguchi’s Ugetsu Monogatari (1953), Masaki Kobayashi’s Kwaidan (1964), and Kaneto Shindo’s Onibaba (1964) & Kuroneko (1968) weren’t conceived as horror-genre film in Japan, and Western generic classification considered these films as arthouse dramas. In fact, all these ghost stories featured a strong cultural and historical context. Ghost of Yotsuya and The Dish Mansion at Bancho are some of the few immensely popular ghost tales, which had different movie versions. Dish Mansion also inspired Koji Suzuki’s novel Ringu.

Related to Ox-Head Village: Kotoko [2011]: A Vicarious Study of a Schizophrenic Paranoid Mother

The post-war despair, poverty, and grief became a potent subtext when these ghost stories were adapted into cinema. The emergence of J-horror in the 1990s expanded the boundaries of the horror genre as conceived by Western filmmakers.  The early 21st-century Japanese filmmakers offered a modern spin on ghost stories, intertwining our contemporary anxieties regarding technology, economy, alienation, and societal breakdown.

Considering such a rich legacy of ghost stories in Japanese culture, it’s no wonder J-horror became a source of soft power.  Takashi Shimizu, Hideo Nakata, and Kiyoshi Kurosawa simply built on the robust foundations laid by Nobuo Nakagawa, Mizoguchi, and Shindo. But apart from Kurosawa, most of the J-horror filmmakers including Shimizu are simply recycling the same plot points and scare tactics. Nevertheless, Shimizu’s Ox-Head Village, though suffering from a predictable narrative arc, remains engaging due to its eerie atmosphere, spooky supernatural entity, and decent performances.

Ox-Head Village opens with three spirited high school girls live-streaming their exploration of a supposedly haunted building, situated in the middle of the woods. A malevolent spirit makes an appearance off-the-camera, and one girl named Shion disappears. The clip goes viral and reaches a high-school senior named Kanon (Koki), who lives in a different town.  Ren, an awkward high school boy who shadows Kanon trying to be her boyfriend, brings the clip to Kanon’s attention. Interestingly, the disappeared girl looks exactly like Kanon. Kanon lives with her dad and her mom has passed away. Soon, she is unnerved by some strange happenings. Though Kanon is clearly not interested in Ren, she seeks his help to visit Shion’s town and the eerie, abandoned building when her dad leaves for a work trip. 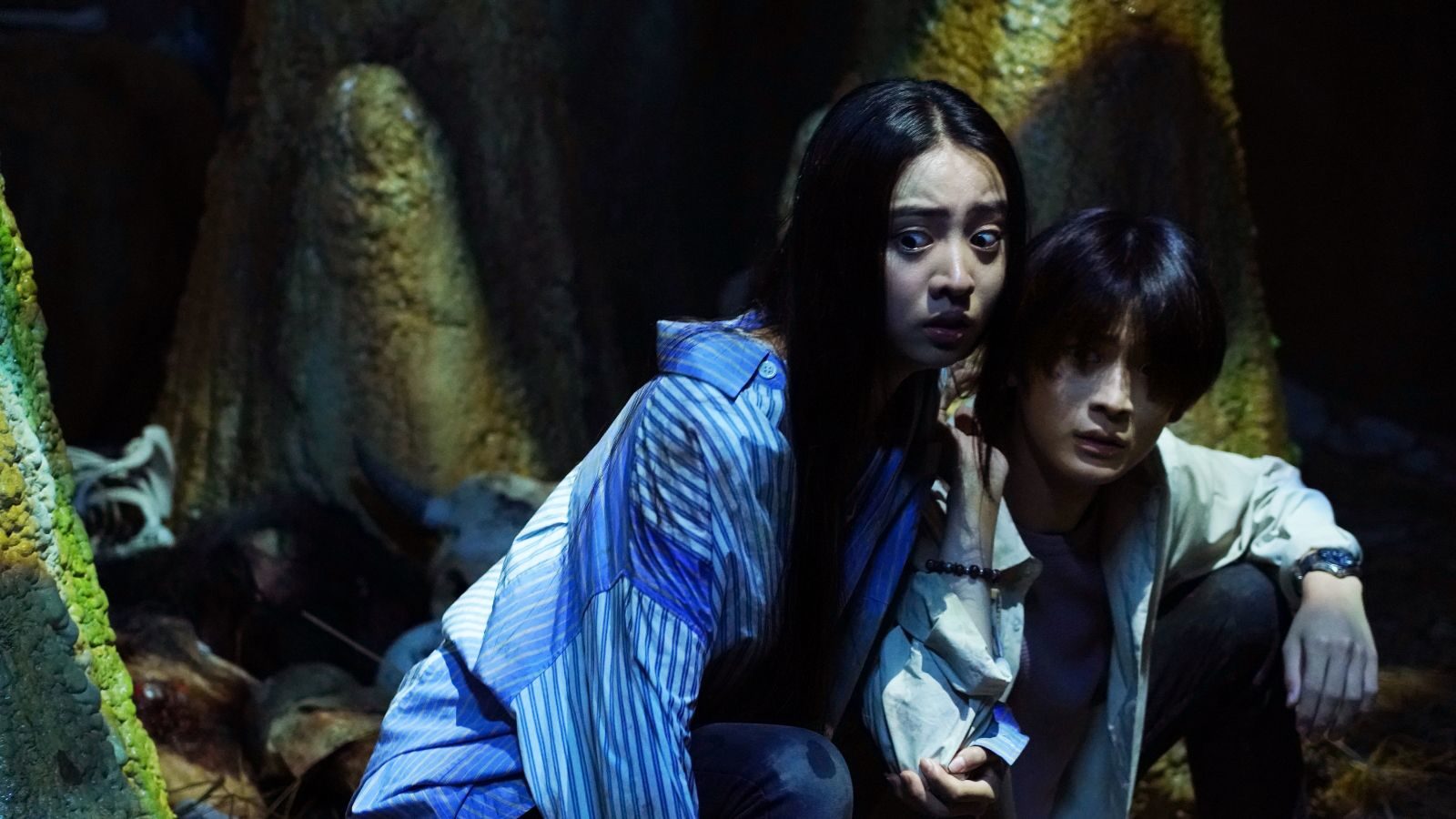 Ren enthusiastically accompanies her, and they meet a middle-aged man who takes them to the building where Shion disappeared. In an ominous tone, the man speaks of the dreadful myth of Ox-head. Subsequently, Ren and Kanon have strange encounters and visions. Add to that a spooky spirit with ox-head plays hide-and-seek with Kanon. The supposedly trapped Shion also tries to communicate something with Kanon. When the duo visits Shion’s home, everything becomes clear. The old, vengeful spirit takes away a few souls in a gruesome manner, but it’s largely after the alleged twin sisters – Kanon & Shion – whose family has a long history with the hostile entity.

Shimizu’s Ox-Head Village works to an extent since its horror is rooted in cultural specificity. Jizo statues and Japanese wayside shrines are part of local traditions that even predate Buddhist beliefs. Shimizu creates a devouring spirit by combining the traditional beliefs with Japanese superstition about twins (as punishment for sins). There’s also the sociological angle of famine. The scares aren’t so innovative, yet it’s good enough.

The primary flaw of Ox-Head Village, however, is the uneven pacing and sudden shift in the last half-hour of the narrative. The film looks very disjointed towards the end though it fittingly resolves everything at the place it started. Still, Shimizu keeps offering us spooky imagery. For instance, the drive through the creepy tunnel and Kanon’s illusory visit to the unsettling ox-head village. Japanese songwriter and model Koki has made her acting debut in this film. She gives a solid performance, though some of the other performances are unintentionally hilarious.

Overall, Ox-Head Village (115 minutes) is a fairly engaging horror mystery with a healthy dose of Japanese folklore though it doesn’t offer anything new for those familiar with the conventions of J-horror.

Special Delivery [2022]: 'Fantasia' Review - A Thrilling, Emotional Ride That Checks All The Boxes