It is a fickle thing, to remember — to confront one’s own history and what comes with that of trials and triumphs in an endavour of self-discovery. Where human experience is concerned, memory is at once its greatest virtue and most precarious vice, a quintessential moment of reflection at the junction of past, present, and future. For Spanish auteur Pedro Almodóvar, this moment materializes in Pain and Glory (original title: Dolor y gloria), the writer-director’s newest – and most personal – film in recent years.

Loosely based on its director’s own life experiences, Pain and Glory stars frequent Almodóvar collaborator Antonio Banderas in a career-high performance as Salvador Mallo, an aging director in creative crisis, reminiscing about his childhood, heartbreak, and the loss of his mother (wonderfully played by Penelope Cruz — another staple of Almodóvar’s filmography – and Julieta Serrano in the past and present, respectively). Joining the cast in supporting roles are Asier Etxeandia, Nora Navas, Asier Flores, and Leonardo Sbaraglia.

Pain and Glory’s narrative reads like a fairytale in its earlier scenes. In a series of animated sequences and voice overs that are interesting in their own rite but distracting from the film’s general style, Salvador narrates his life in a confession of ailments – physical, mental, and emotional. Suffering from physical pain as a result of his declining health, mental distress caused by the death of his mother, and emotional insensibility following the end of a long-term relationship, Salvador’s predicament is made clear early on: to regain his lust for all things creative, he must first confront his grievances. Juxtaposing past and present to that end, Almodóvar sets up both the different levels at which his film operates and, more importantly, the character at the heart of it. 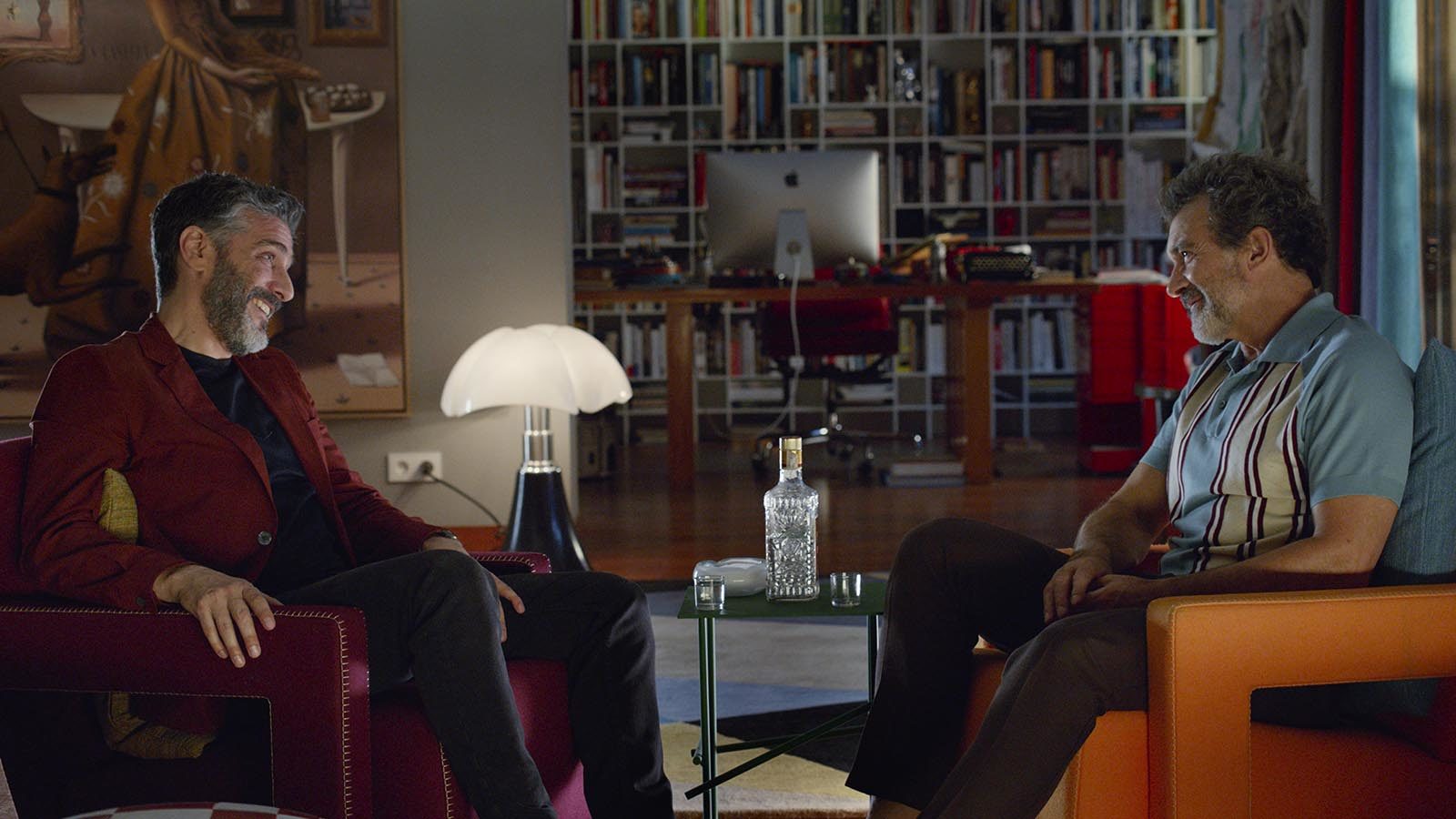 Weaving together elements from all of the director’s previous films, Banderas’s Salvador navigates the different parts of Almodóvar’s past with a tenderness that can almost be described as sensual. From the film’s docile beginnings washing clothes in a river (where the magnificent Rosalía serenades the viewer into a simpler time) to Salvador’s sexual and artistic awakening – both as a child and as a grown man – Banderas invites the viewer into his director’s most intimate and formative memories, thereby creating a duality that informs the film’s core: that of actor playing director and director playing actor.

Banderas’s Salvador is a character, indeed, but it is one the veteran screen actor has been playing in increments over the course of his entire collaborative career with Almodóvar. In Pain and Glory, the actor realizes the character’s full potential and delivers a culminating performance that won him the Best Actor trophy at Cannes and will likely see him through to an Oscar nomination come January if the film is well received. Almodóvar’s Salvador, meanwhile, is a stranger to the director at the beginning of the film and an actualized, self-aware version of himself by its end credits. Pain and Glory works best when it acts as an exercise in self-reflection, a venue where the director can rediscover himself and the viewer can discover him.

In many ways, the film is about beginnings and endings. Almodóvar explores the infancy of desire – artistic, sexual, emotional – as well as its finality. We see this manifest in the aforementioned juxtaposition of past and present: Salvador has his first brushes with artistic expression when he leads a choir and discovers plastic arts as a child, while an older Salvador is a director, screenwriter, and a playwright; in one of the film’s most aesthetically striking sequences, a younger Salvador’s sexual desires awaken when he glimpses a builder bathing (César Vicente), while an older Salvador – triggered by the brief reappearance of his old lover (marvelously played by Sbaraglia) – reflects on a doomed relationship that has shaped much of his work; young Salvador clashes with his mother and what she wants him to achieve, while an older Salvador reconciles with the (imminent) passing of his mother and her final wishes. This is all to say that the film and its themes are somewhat in conversation with themselves: past with the present, life with death, beginnings and endings, desire and fulfillment, love and grief, pain and glory. 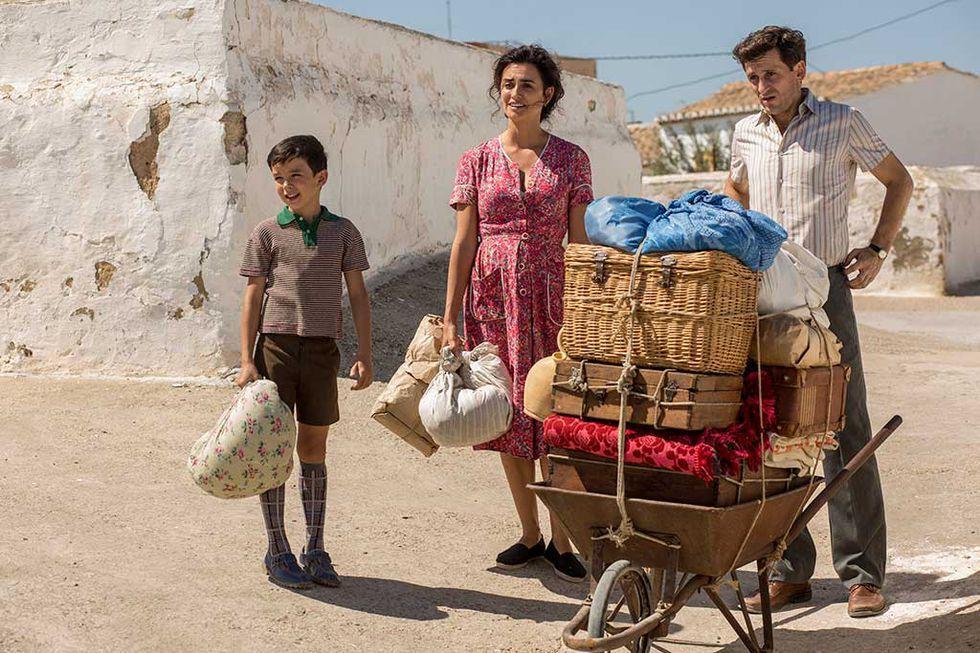 Production designer Antxón Gómez plays into this conversation with his meticulous work on this film. Salvador’s family moves from the village to a cave during his youth in search of better opportunities. Throughout the film, the cave is often in a constantly changing state, the foundation for the finished product that is to come; in each memory, a new part of it is completed – a kitchen tile here, a table there. In the present, Salvador has fashioned himself a beautiful home (a detail often pointed out by other characters on multiple occasions), a finished product as colorful as the curtains of the cave’s front door — a material link between past and present; the realization of his mother’s desire for a better life.

Pain and Glory (Dolor y gloria) is a director’s ode to himself. It is a humble and tender love letter to the firsts that form one’s artistic and human identity. At 70 years old, Almodóvar proves the age-old trope that the best stories we tell are often ones we know ourselves, ones we have lived through. Reflecting on glory and what naturally comes with that of pain, Almodóvar looks back at his life and remembers, and – in doing so – he becomes. 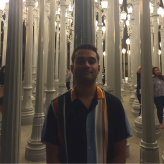 Vicken Margossian is an aspiring film critic and filmmaker. He's currently a graduate student in Cinema and Media Studies within the University of Southern California's School of Cinematic Arts. While in Los Angeles, he hopes to advocate for Arab cinema, diversity in the industry, and horror movies.