Home»OTT»MUBI»Paris, 13th District (2021) MUBI Review: From the Millennials in Love, With Love
MUBI/OTT/Reviews

Paris, 13th District (2021) MUBI Review: There’s something about being in love in the current day and age – a trend among the millennials who are still fishing for comfort – that makes it prone to Dadaist experiments. My Gen-Z generation doesn’t judge people for being hedonist or selfish in love or for making earthquakes out of breakups, so when Camille tells Émilie, his former roommate and sexual partner, that Stephanie has dumped him, and he is sad, but he couldn’t care less about it, the honesty resonated with me. It is the same honesty with which Nora hammers her cell phone screen when she receives humiliating text messages from the students in her class. Directed and produced by Jacques Audiard, Les Olympiades: Paris 13e, or Paris, 13th District, is like biting into a fresh croissant. On its surface, it is an honest representation of how webbed the lives of people in big cities are; every layer inside it comes with its own flavors, telling a unique story of love, loss, and familiarity.

Émilie, played by Lucie Zhang, is a call center operator who lives in her grandmother’s apartment. She is on the lookout for a flatmate, and Camille, played by Makita Samba, a former teacher working on his doctoral degree now, responds to Emille’s advertisement. Soon they start living together and become sexual partners. However, Camille’s interest in the sex fades while Émilie catches feelings for him. Things escalate; Émilie loses her job, and Camille embarks on a romantic relationship with Stephanie, ultimately moving with her. The black and white montage gives in to a color break as the second narrative unfolds. Nora, played by Noémie Merlant, is 33-years-old and full of enthusiasm as she resumes her undergraduate law education. In an effort to connect with her younger classmates, she impulsively buys herself a blonde wig, but the noble intention misfires and she drops out of university. Her previous experience as a real estate agent lands her a job in a small real estate firm where Camille works, and the two become engaged in a platonic affair. Camille also reconnects with Émilie in the meantime, and Nora strikes up a unique online friendship with a supposed look alike, Amber Sweet, played by Jehnny Beth. The four lives cross paths in the image of two parallel lines that intermingle before separating again.

I was struck by how the film bore a similarly aloof but curious gaze as Eric Rohmer’s in the Six Moral Tales, especially Suzanne’s Career and My Night with Maud, where each of the characters is faced with occasions and relationship decisions that will go on to redefine themselves. Do our four characters arrive at their desired conclusions? The screenplay, written by Céline Sciamma, Audibard, and Léa Mysius and loosely adapted from the works of Adrian Tomine, playfully harbors just the right amount of dramatic elements without making you eye-roll at it. This 105 minutes-long-drama feels like an anthology movie, united in its intent to find cottony comfort – not happiness, not so much love either. 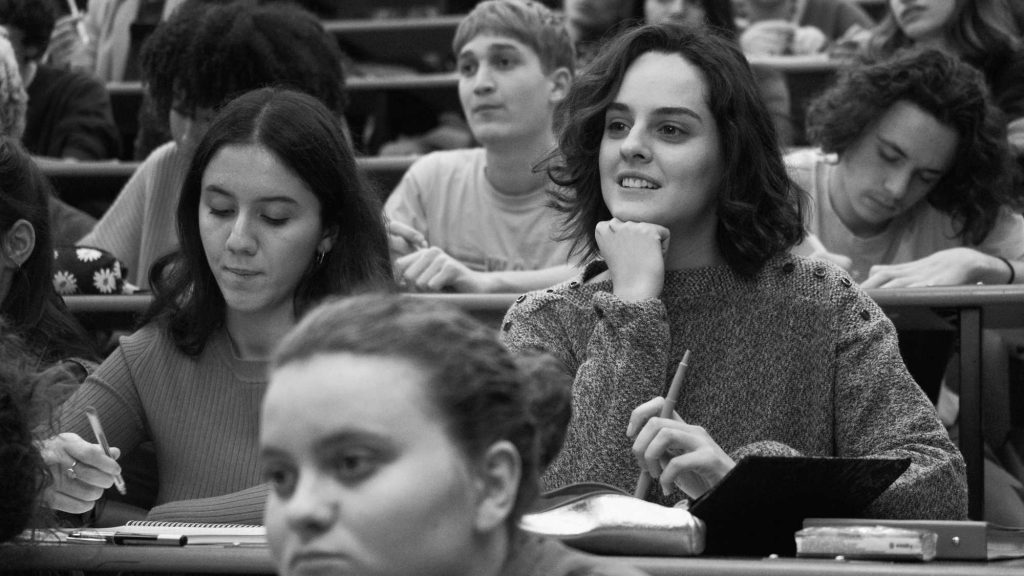 The film is charged with so much nudity and sex that you’d want to stereotype it as a typically French film. Hold on; notice how admiringly consent plays out in bed between Camille and Nora. After the wonderfully shot intimate scenes between Issac and Maeve in the British television show Sex Education (Season 03), the foreplay between Nora and Camille comes close to feeling scintillating. Merlant astonishes me every time she appears on the screen. After her spell-binding performance as the young portrait artist in Portrait of a Lady on Fire (2020), she brings Nora to life so effortlessly. Nora is excited, confused, scared, professional, flirtatious, and happy. Each of these emotions was so vividly drawn across her face that I ended up feeling most profoundly for her towards the end of the film. Zhang and Samba are equally believable, matching their stride with Merlant in their roles.

The film blooms in the little tokens of dialogue that the characters exchange. The candid confessions of Camille are among my favorite; so is the split-screen conversation between Émilie and her sister. After two years of the pandemic and its disappearing footfall in our lives, the fine thread of death narrative that impacts the characters in a small but essential way feels like a necessary inclusion. The touristy Parisian districts aren’t explored for a fresh change. The Audiard’s version of Paris in this movie houses tall buildings rising into the sky and decorated shop windows selling real estate instead of chocolate eclairs.

Also Read: 20 Best Black and White Movies of the Century

A cosmopolitan, multicultural tale of love like this one, however, has been so much explored in the past few years, that the film failed to remain with me after it ended. The Worst Person in the World, which won so much critical acclaim only last year, also deals with millennial effervescent love, divergent sexual expressions, and the genesis of self-awareness – but better. Beth’s character is paid little importance, making the heterosexual romance at the heart of the narrative more important than exploring queer love. It is particularly an anomaly because the film, right at its start, expresses an interest in the contemporary expressions of love, so far as introducing a digital angle to it.

Paris, 13th District is not Audiard’s best, but it sure is a love letter to millennials who continue to look into shop windows in search of love. It is an ode to love itself, a 21st-century love that is not shy to confess that it has sexual urges and that the sexual urges may sometimes be all it is about. It is an honest effort, commendable in approach, and simply heart-warming. It is currently streaming on MUBI India.

Everything Coming to Amazon Prime Video in June 2022