We know a film can only be as good as its screenplay. It can’t be made into something it isn’t intrinsically no matter how many metaphors, esoteric allusions, and name-droppings the film-maker does. And that’s essentially is the problem with Mysskin’s much anticipated latest feature, Psycho (2020); a bad, erratic script that runs amok, bringing to mind the movie’s visually impaired protagonist’s effort to drive a car. Mysskin is definitely one of the few passionate film-makers working in the Tamil film industry, who makes genre movies (mostly crime/thrillers) with auteurial touches (read: high-art).

Psycho opens, as one could expect, with a declaration that it’s a tribute to the master of suspense. A college student sitting next to me in the theatre was slowly reading, Al-fred Hitch-cock, while few cinephilic youngsters sitting behind were clapping so vigorously, adding to the student’s bewilderment (he was murmuring: ‘why the heck are they clapping’). It’s probably a testament to Mysskin’s reach as a film-maker here, catering stories to a wider spectrum of audience, who watch his films if not for the brilliant visual sense at least for his strangely interesting humanist narratives. And of course, a group of audience watch his movies just to make fun of the so-called Mysskin-isms. 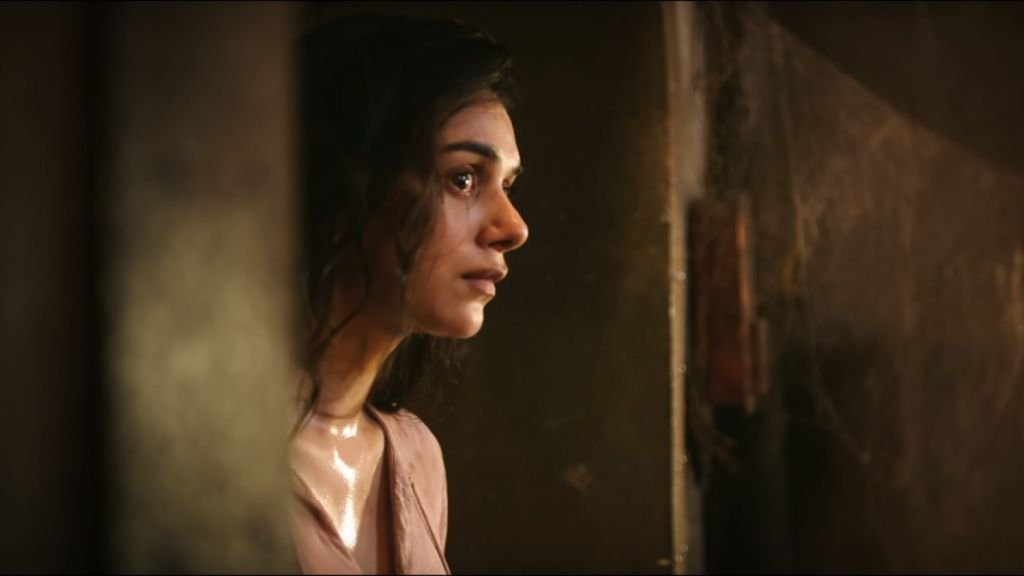 The first twenty minutes particularly feels too rushed and excruciatingly uneven. Remember the thrilling yet lyrical opening sequences in Yutham Sei (2011) or Onaayum Aatukutiyum (2013).  There’s none of that; just a high-pitch screaming followed by a man casually chopping off a woman’s head. He displays the headless corpse in public, and the media reports it’s the serial killer’s 13th victim. It’s followed by a blatantly expository scene, where a psychologist explains in a radio interview that could be better termed as ‘psychopathology for dummies’. The aesthetic sense, however, isn’t bad. We get a fine God’s eye view ‘drone’ shot of a wailing mother [considering the Abraham Manslow’s quote in the opening credits – ‘We are simultaneously gods and worms’ – Mysskin alternates between god’s and worm’s pov], and it’s interesting to note that there’s no sense of mystery over the killer’s face or identity (well played by Rajkumar Pitchumani).

Therefore, he establishes Psycho isn’t a traditional chasing-a-serial-killer narrative, but probably a closer study of one. But the pretentiousness and artificiality begins to creep in once Myssin moves to the narrative’s emotional crux: the love story. Gautham (Udayanidhi Stalin) is your average Tamil movie stalker-hero, who shows up at all the places Thagini visits. But he is doing it out of ‘love’, unlike the bad guy stalking women to collect their heads. Thagini is played by the angelic beauty, Aditi Rao Hydari, but Gautam is visually challenged and he has (probably) fallen in love hearing her voice since she works as a RJ. After few badly written scenes (and a great Illayaraja song), convinced that the audience are emotionally invested on the romance plot, the film-maker moves to the inevitable: Thagini gets kidnapped by the serial killer.

When her head is on the chopping block, she undauntedly smiles, and vows that Gautam will come to save her. The killer starts the clock, giving her seven days time. Never mind that only couple of scenes back Thagini state that she can’t love him just out of pity. Alas, she can love him now, because that’s the goddamn plot. And Gautam convinced that the lead officer (director Ram in a thankless role) in the case is  good at nothing, but humming old Tamil songs at the most inappropriate moments seeks the help of a quadriplegic, profanity-spilling former police officer, Kamala Das (Nithya Menon). What the narrative’s got is a interesting set of characters with unique shades. What it completely lacks is depth, and over a time the characters’ eccentricities adds nothing to the story but a strong feeling of irritation.

What’s unappealing about Psycho, more than the inane plot and fairy-tale logic, is the director’s presentation of graphic violence. The portrayal of violence has a numbing effect on us that after a point it doesn’t bother us. I mean this comes from an artist who has previously proved how nuanced a film-maker can be while dealing with the subject of sexual violence against women (in Anjathey & Yutham Sei). There’s the characteristic empathetic gaze on the society’s undesirables – the homeless, sex-workers, etc – but those are just good yet unimportant side notes. Mysskin’s sense of staging (brilliant aerial shot of a car moving through the sea of darkness), evoking deeper meanings through simple visuals or crafting a intriguing sense of irony (a Muslim man’s daily prayer leading police officer to the pig farm) are all pretty much intact. But the poor writing and gratuitous violence can’t supersede the stylistic splendor.

Also by Mysskin: Thupparivaalan [2017] – An Entertaining albeit a Tad Underwhelming Thriller

For the umpteenth time in a Mysskin movie, we are seeing policemen running like a herd of sheep, and lapses in logic that unnecessarily drags the narrative. The whole sequence involving Singampuli’s murder rather than incite tension offers unintentional laughs (and that’s just one example). Eventually, the more troubling factor of Psycho is Mysskin’s attempt at empathizing with the serial-killer. I’m all for narratives that profoundly explores a criminal’s social, personal background. But here the film-maker dramatically equates the extremely deviant behavior of a killer simply to lack of motherly love and destructive punishment.

If there’s one thing we learned from people who studied serial-killers, it is that each of those terrifying individuals are unique product of nurture and nature. What exactly leads to the genesis of a serial-killer couldn’t be exactly traced to few emotional or social factors. Of course, a film narrative would have to provide a concrete reason. In Psycho, Mysskin thankfully avoids a detailed back story. But the way he deals with the themes of sin, punishment, and power of love, forgiveness in relation to the titular character comes across as very insensitive. Movies can come close to humanizing a serial-killer (for e.g., Monster or the Ed Kemper character in Mindhunter). But it’s impossible to empathize with a dangerous murderer (and that too after turning in such a poorly written sob story). By the end, the lead female character says she saw the child within the psycho. All we can wish her is good luck to successfully appeal to ‘that child’ just before his cleaver makes her head roll like a football. And all we can say to Mysskin is, better luck next time!