It’s certainly a comeback for actor Vishal who often associate himself with crass commercial cinema. The soothing tempo of direction and performance keeps us entertained, but Thupparivaalan lacks greater payoff or staying power of the director Myskkin’s best works.

Thupparivaalan [2017]: An Entertaining albeit a Tad Underwhelming Thriller

The best and distinct thing about Tamil film-maker Mysskin is the way he constructs a scene that serves us unbreakable anchor points of the seemingly simple story. At its best, those hyper-realistic dramatic units take the viewers out of their mainstream cinema comfort zones in a very polemical and graceful manner. Violence erupts with minimal but sudden movements, the nocturnal cityscape appears to be breeding ground of unsavory characters, and there’s purposefully bleak & cynical social commentary. Yet he never quits being compassionate and humanistic, in not just sentimental but subtly earnest way. Barring the commercial & critical disaster Mugamoodi (2012), Mysskin’s six other films has fair dosage of profound emotional subtext which resonates long after the narrative ends with a irrefutable finality. 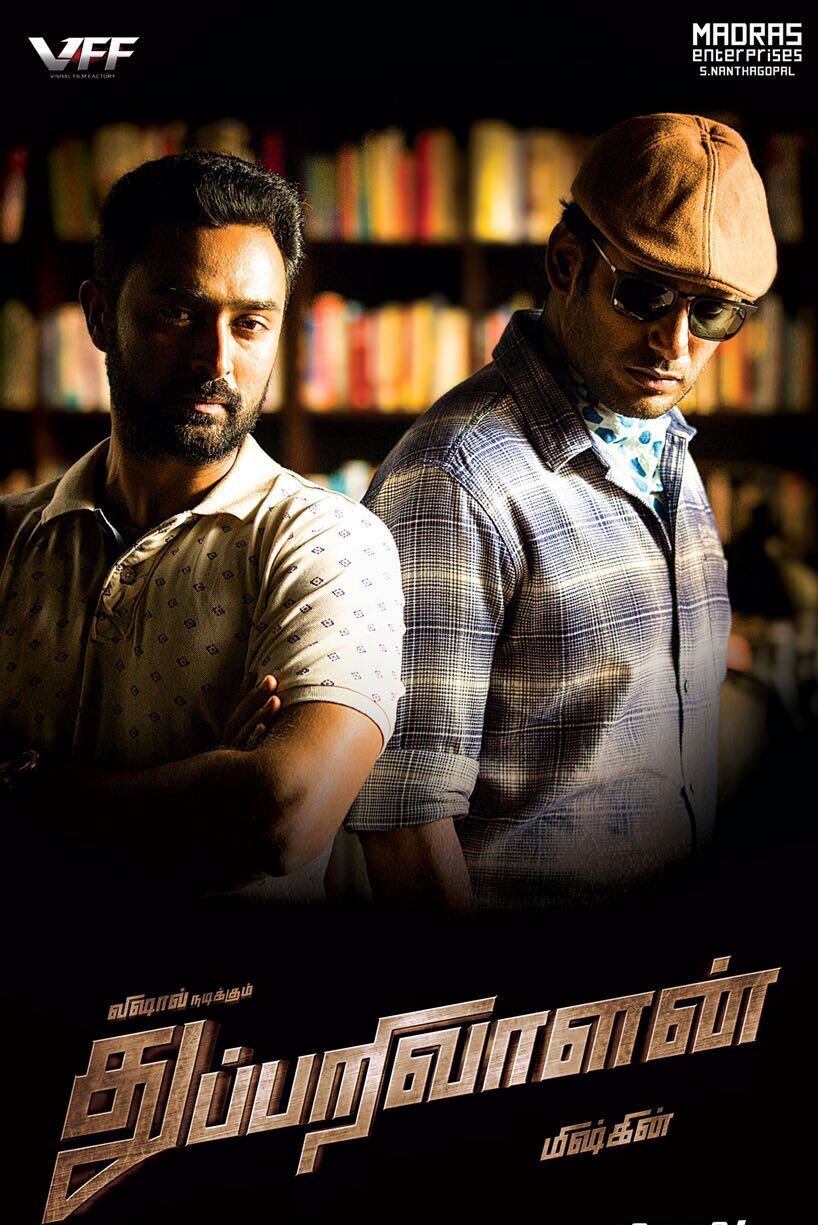 In his eighth film Thupparivaalan (Detective, 2017), Mysskin has once again taken a chance with mid-budget cinema, riddled with a well-known star cast. The last time he did that brought out the worst results which later led to the making of austerely elegant comeback thriller Onaayum Aatukuttiyum (Wolf and Lamb, 2013). Thankfully, Vishal starrer Thupparivaalan keeps alive Myskkin’s brand of quirkiness and visual acuity. It’s certainly a comeback for actor Vishal who often associate himself with crass commercial cinema. Nevertheless, Mysskin flounders a bit with a storywhich neither delivers topnotch intellectual twists nor staggering emotional arcs. The soothing tempo of direction and performance keeps us entertained, but Thupparivaalan lacks greater payoff or staying power of the Myskkin’s best works.

As it is customary in the director’s cinema, the plot is set in motion with an act of cruelty followed by a compassionate gesture. The protagonist Kaniyan Poogundran (Vishal), as hinted in the trailer, is based on Arthur Conan Doyle’s Sherlock Holmes. Mysskin adds his own brand of eccentricity to the high-functioning private detective character. Prasanna plays Mano, Kaniyan’s Watson-like friend. After allotting few scenes to ably draw out the protagonist’s idiosyncratic personality, the narrative delves into central mystery: the death of a Pomeranian dog. Mysskin goes for the rare close-up as the little boy/client eloquently narrates the fate of his beloved dog. The dog is murdered and the clue is a bullet casing. This initial set-up may sound a bit silly but the series of strategic visual choices keeps our head and heart engrossed. In a slightly annoying subplot, Kaniyan encounters Mysskin’s version of Doyle’s Irene Adler named Mallika (played by Anu Emmanuel). A possibility of quirky romance is teased which provides some laughs to discard some of the gloominess. Slowly but steadily (and with no songs), the plot moves forward to unravel much larger crimes than the killing of a dog. The clues point to family of ruthless criminals, spearheaded by aptly nicknamed Devil (Vinay).

Shots of Subways, sea shores, towering building, the nighttime chase, inefficient traits of police force, frozen poses, religious statues, static camera, characters at the far end of a wide shot, references to literary characters and paintings, subtle gradations of light and shade, unforeseen Zen moments, unique death poses, mysterious bald-headed guy, stirringly sad notes of violin — the rearranged list of Mysskin’s ubiquitous pet themes and visual tropes is as always compelling to observe (and there’s an interesting hint to a visually-impaired character – another recurring Mysskin-esque element). Writer/director Mysskin has often proved himself by executing the must-haves of mainstream cinema in spellbindingly innovative ways. Since he believes in the remark ‘there are no heroes only heroic deeds’, Mysskin’s protagonist doesn’t only prove their strength of character by bashing the batch of bad guys. Even an agonized struggle to save an accident victim (Anjathe, Wolf and Lamb) or playing graceful notes of violin to the song of a begging blind child (Pisasu) makes up for an impressive gesture. Here too, the plot isn’t driven by protagonist’s mettle but by his humanity. However, the chief flaw of Thupparivaalan is that it misses out on weaving absorbing mystery at its centre to compliment the unique visual touches. 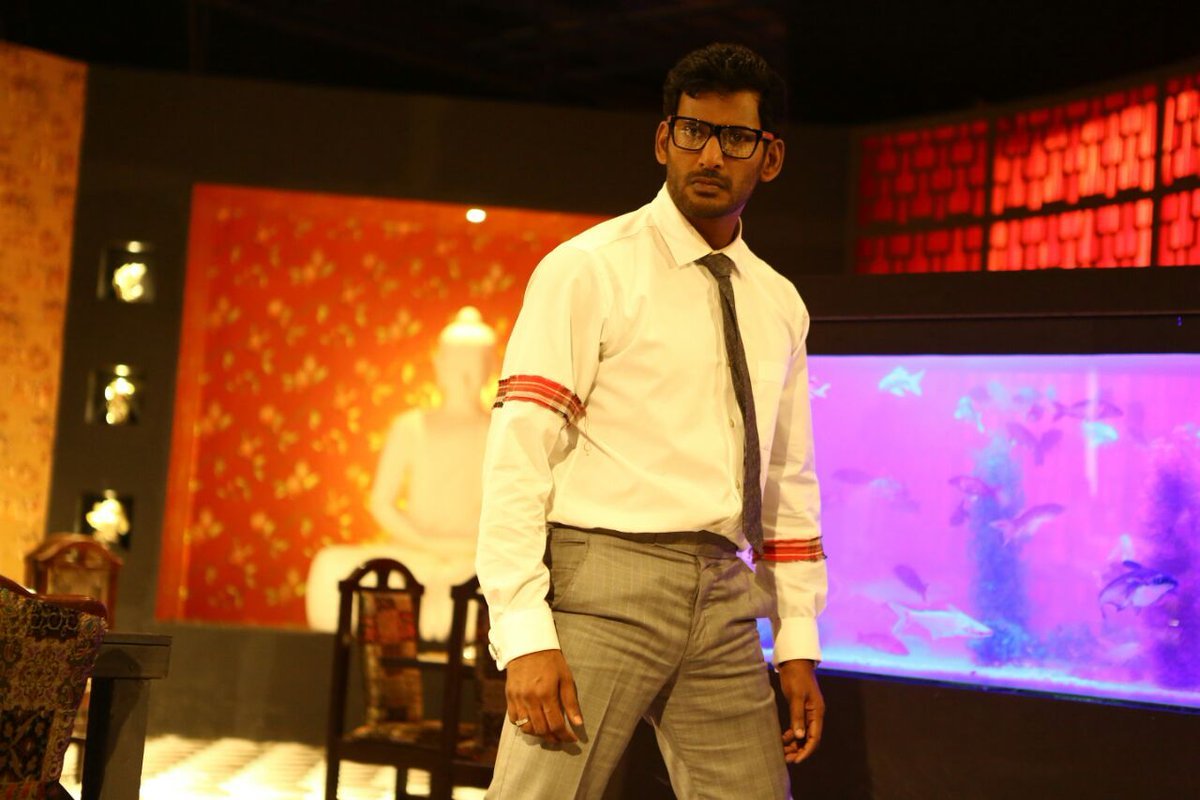 The first-half despite the slow pace captivatingly sets up the premise. The interval-block twist is of course predictable. Yet the way the narrative travels to this point is interesting. There’s some emotional dimension to how each clue is unraveled (the picture frame of a dead child placed on the floor is a brilliant touch). Then there’s an exciting shot of a mirror as a woman’s righteous anger manifolds. But with the comparatively fast-paced second-half, which eschews creepily thrilling atmosphere for full-fledged action, the director only feigns emotional quotient and also fails to deliver impeccable brainy twists. In Mysskin’s universe where everything lies between hyper-realism and kitsch, romance or possibility of love is handled in the most abstract manner. It was evident in his previous film Anjathe and Pisasu. Here too the relationship between Kaniyan and Mallika doesn’t quite make us feel the emotions (and Vishal’s acting in the alleged emotional scene doesn’t help too). The other odd factor about the movie is its casting choice.

The fine supporting cast members – including veteran film-maker/actor Bhagyaraj, Simran, Andrea, Jayaprakash – are roped in to play small roles that are just disposable ciphers. Mysskin has previously provided fine scope even for limited characters: for eg, Lakshmi Ramakrishnan’s cameo in Yuthem Sei or Radha Ravi’s role in Pisasu. But here these well-known faces perish without making any considerable impact on the narrative. Apart from the unbearably melodramatic scene, Vishal’s performance doesn’t have a jarring note. The talented but gravely underused Prasanna effortlessly digs into the side-kick character. The surprising factor in the acting department is Vinai who looks more menacing and less pretentious than what I expected. The one good thing Mysskin derives out of the comparatively big budget is the well-realized action set-pieces. The fight sequences set in Chinese restaurant and mangrove swamps of Pichavaram were mesmerizingly staged. Moreover, the final verbal play between the detective and villain was darkly funny. Even in Mysskin’s best works like Anjathe and Wolf & Lamb the unnecessarily bloated hide-and-seek action climax were slightly frustrating. In Thupparivaalan, the climactic stunt is actually the redeeming factor of the non-thrilling second-half.

Thupparivaalan (160 minutes) is definitely a watchable action-thriller which once again finds the contemporary Tamil cinema’s best film-maker establishing his singularly bleak as well as bizarrely serene cinematic universe. If only the movie had a better core story, it would have transposed as a terrific addition to director Mysskin’s enchanting oeuvre.

Mother! [2017]: Aronofsky's Most Brutal and Disturbing Film Yet