Review That Jack Wrote [2018]: ‘MAMI’ Review of The House that Jack Built

Before Jack reviews The House he built, he has an announcement for you. Now you can partake in his retelling of five random incidents on Vudu and iTunes.

Verge: I know what you’re doing Jack. It’s rather gimmicky and self-indulgent. You think your review is a work of art? This is what people do when they don’t have genuine criticism to offer.

Jack: Some reviews have metaphors that only people who’ve seen the movie can understand. In one of his interviews, Francois Truffaut said that every work of art demands its own treatment. The Creation of Adam, one of the most celebrated paintings of all time, wasn’t even made by a painter. Michaelangelo was a sculptor. To paint the Sistine Chapel’s ceiling, he had to master an ancient technique called the Fresco, which involved the use of natural pigments, limestones, sand, and water. instead of using the sand, Michaelangelo decided to use the volcanic ash. This unusual choice made the surface smooth and allowed the plaster to dry quickly. One can say that Michaelangelo was Michaelangelo because he decided to use volcanic ash instead of sand. By using a different substance he not only changed the art but the way art was created. He managed to find the perfect treatment for his work of art.

Verge: You still haven’t talked about the movie, Jack.

Jack: You’ve to understand a review in terms of what it wants to be. This is not the kind of review that summarizes the plot and gives a rating at the end. I want my review to be the reflection of the movie.

Jack: what if that’s the goal? How do you measure the success of a movie that’s designed to make you angry? Have you heard of Myra? Myra Hindley? She went down in the history as ‘the evilest woman of Britain’. She was guilty of killing five children. Her bigger crime was failing to get out of a toxic relationship. She had fallen in love with a psychopath who made her watch X-rated movies, read the accounts of Nazi atrocities, drugged her and eventually blackmailed her to lure in kids that he would sexually abuse and murder.

Verge: That doesn’t change the fact that she was involved in those murders.

Jack: In 1997, Marcus Harvey, an English artist made a painting called Myra, the portrait of a serial killer. Till this day, the painting remains one of the most controversial and provocative works of art. The popular image of a child murderer was recreated with handprints of innocent children. People called it the sick exploitation of dead children. The painting was attempted to destroyed twice with blue ink and eggs. There are other similar works of art, Piss Christ- a picture of the crucifix submerged in the urine of artist, or The Holy Virgin Mary created with porn magazines and elephant dung…

Verge: I know you’ve read some list on google. What’s the point?

Jack: These images are not offensive- a portrait of a serial killer, a crucifix, or even a modern version of the holy Virgin Mary. The method with which they’re created makes them problematic. We tend to see the world in binary. Good-evil, sacred-obscene. When we see two opposites juxtaposed in the same image it baffles us, it provokes us.

Verge: But what kind of sadistic person enjoys watching a brutal murder?

Jack: You know what Hitchcock used to call a murder? ‘Tonight’s entertainment’. He said everyone enjoys a nice murder, provided they’re not the victim. In his show Alfred Hitchcock Presents, there is an episode called The Perfect Murder. It’s an ironic title because a perfect murder would be too boring. Something has to go wrong. In this episode, two broke nephews try to murder their aunt to inherit the property of the deceased uncle. They put finely ground glass in her food but she doesn’t eat it. Next day, maid serves the same food to them in the breakfast. The very tool they were going to use for the murder causes their death. When Hitchcock said everyone enjoys a good murder, he meant everyone enjoys a good irony.

Verge: What are you gonna do now, Jack?

Jack pours hot lava on his head. He shrieks. A large amount of steam builds up around him. The molten lava trickles down his forehead and pops his eyeballs. His skin is burning. His body twitches in pain.

Jack’s vocal cords are damaged because of thermal injury, yet he continues to talk.

Jack: Michaelangelo waited too long to paint God because he wanted to master the technique first. The volcanic ash that he used was made from carbon-based materials, including humans. God didn’t die for humans. It’s the other way around. The innocent people had to die to create the perfect image of God. Once you know how a work of art was created, it changes your perception, doesn’t it?

Jack drops on the floor. His punctured lung dangles out of his chest.

Jack: Endings are inevitable. The question is, how far is an artist willing to go to create art? In ‘House that Jack Built’, Von Trier goes to the depth of hell and it’s hard to return from there. This might be the last film by Lars von Trier. I feel like I’m done. 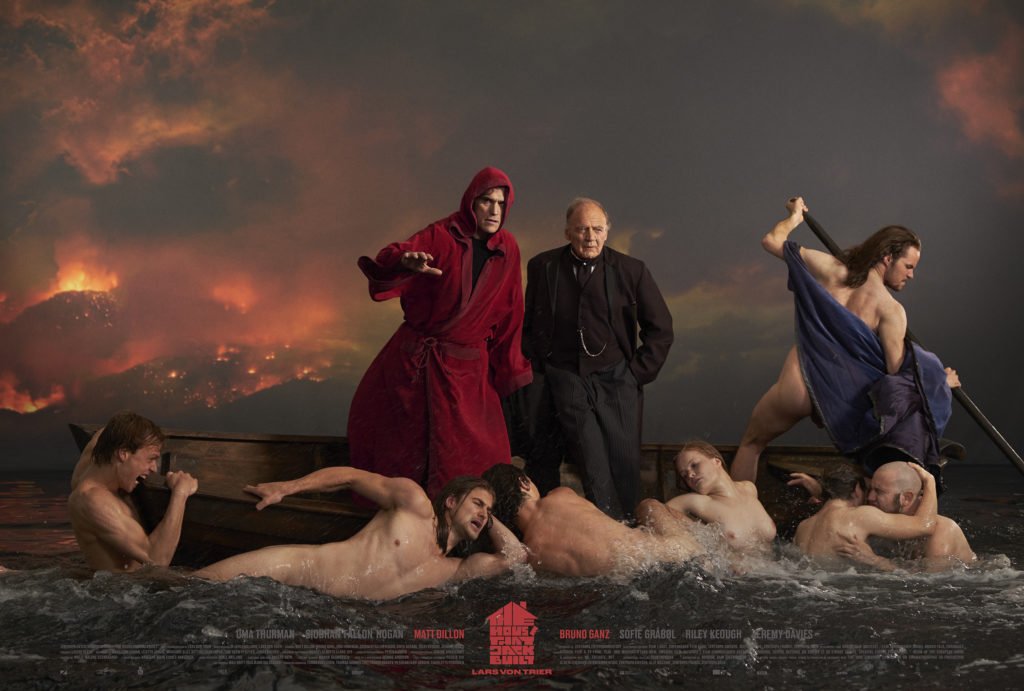 ‘HOUSE THAT JACK BUILT’ WAS SCREENED AT THE 20TH JIO MAMI MUMBAI FILM FESTIVAL WITH STAR.
CLICK HERE FOR OUR COMPLETE MAMI COVERAGE.

Review That Jack Wrote [2018]: ‘MAMI’ Review of The House that Jack Built