Home»Reviews»The Seventh Continent [1989]: A Critique on the Emptiness of a Quotidian Existence
Reviews 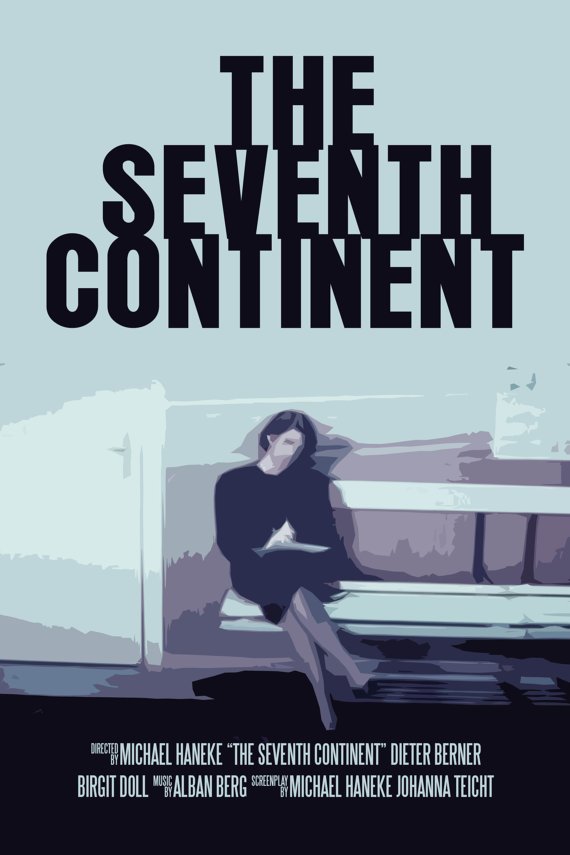 Austrian film-maker Michael Haneke is arguably one of cinema’s greatest interpreters of modern life’s isolation and alienation. The people in Haneke’s films are not only afflicted by the absence of love, but also remain in a limbo state, feeling nothing. Haneke made his feature-film debut (after working in numerous TV projects) with “The Seventh Continent” (aka ‘Der siebente Kontinent’, 1989), which happened to have commenced his unofficial ‘emotional glaciation’ trilogy [followed by “Benny’s Video” and “71 Fragments of a Chronology of Chance”]. In a formidable and assured manner, Haneke conveyed his profound themes, visual flourishes and unexpected shock values that became trademark elements in his subsequent, incendiary works. There’s a brutal approach in the way Haneke explores the bourgeois family life, which makes his detractors tag him as ‘masochist’, ‘sadist’, and ‘obnoxious moralist’. But his approach always provokes serious deliberations and reflections within me. While cinema generally showcases violence in a positive or glamorized manner, film-makers like Haneke depict the pain it reverberates within one’s mind and body. He observes everything from a distance and retains stern aesthetics, but gradually his visual compositions are able to place a burden upon us. A burden which kindles our emotions and thoughts to draw upon our own conclusions (do I need to insist that those conclusions we derive aren’t easy to digest?).

Haneke’s later films like “Cache”, “Code Unknown”, “The White Ribbon” etc possessed a semblance of a plot structure, but in “The Seventh Continent”, he strips the aesthetics from the burden of a plot to delve deep into a circle of boredom and isolation. Influenced by the cropped framing of Robert Bresson (this kind of framing shows how our physical existence is constructed out of mundane, manual activities), Haneke opens the film in a atmosphere of oppressive silence and thick darkness. In that frame, we see faceless family, sitting inside a car, calmly gazing at the mechanized moments of sprays, washers and big rotating brushes of the car wash machine. As the car moves away from this monotonous washing cycle, we get to see a travel agency’s billboard advertisement of an idyllic coastal place in Australia. Yes, the ‘Seventh Continent’, which when compared to family’s automated urban existence seems to promise something different and good. Of course, there are no musical cues or humorous self-references or typical editing to make you easily understands the family’s empty feelings. Haneke does manipulate our feelings, but he is so subtle about that.

Before getting to clearly see the faces of the three family members (or learn what they do), we first get to witness their pressurized lifestyle, with clogged up escape valves. They get up at 6 am, their hands squeezes the toothpaste, dispense food into fish-tank, works the coffeemaker or spills down the cereals into a bowl; the garage door opens, child is dropped at school (she is earlier intimated to get her red sweater), the mother is dropped at her work, and finally fathers parks his car at the office parking lot. The father Georg (Dieter Berner) continues the unbroken, mundane rhythm, taking look at all minute, methodical details at work. That’s when a letter is read, chronicling the background details about the family members. The letter is written by Georg’s wife Anna (Brigit Doll) to her mother-in law and father-in law, living alone in the countryside. She first apologizes for the long gap between the letters. Anna confesses the hardships they faced in recent times (Anna’s mother died and her brother Alexander suffered from nervous breakdown) and moves on to describe the wonderful job prospects of Georg. The details in the letter make us build a profile of their personalities, but then the aesthetics only conveys the trio’s precise, ritualistic movements. 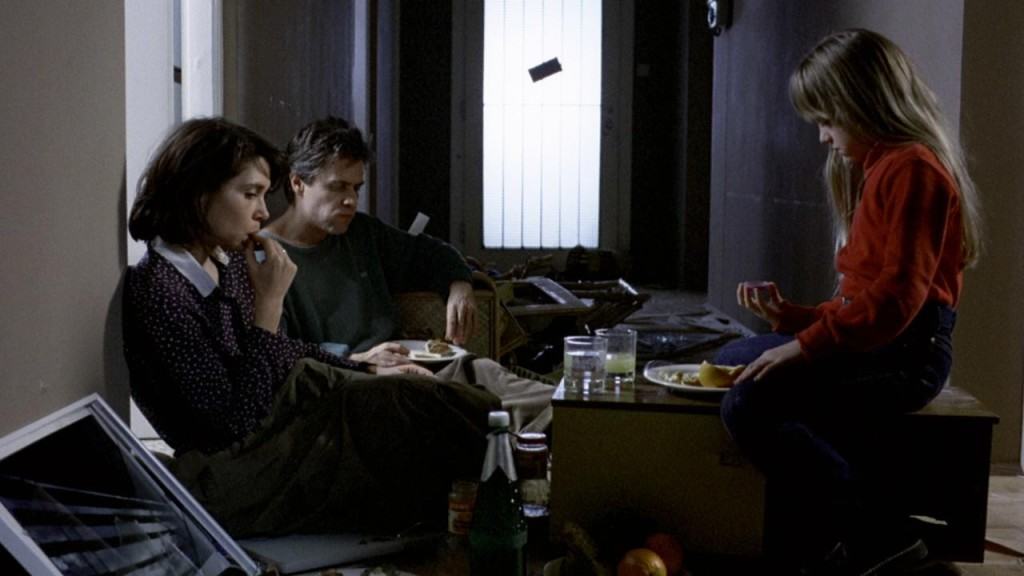 Anna works as an optician alongside her brother Alexander. In the evening, she goes shopping to supermarket with Georg. Their hands select different food items and wine. Then there’s a long static shot of the attendant’s emotionless face at the billing counter, rapidly typing into the machine and the printer spews out the bill. These shots marvelously conveys how there is no difference between the movements of a machine and that of a human. The little daughter Everl aka Eve (Leni Tanzer) at school pretends to be blind, perhaps out of loneliness or to expect a showcase of love. When mother Anna hears about the daughter’s antics, she only bestows a violent punishment (she slaps Eve). Through these collections of small episodes, the mechanized human beings’ emotional cracks slowly come to light. The first series of routines are set in 1987 and in the narrative’s 2nd part, set in 1988, the family continues the same set of motions. The only difference is that the emotional fissures have widened. ‘Why’ and ‘what’ parts are left ambiguous, although Anna’s usual letter to mother-in law only talks of good, hopeful things. Yet again, we see the three family members sitting calmly inside the car – moving through the car wash — but at this point we see some painful emotions on Anna’s face. In the third part that unfurls in 1989, the family is still continuing the boring routine (after paying a visit to Georg’s parents). Nevertheless, they have taken a stern decision. They have decided to emigrate; may be to the seventh continent. ‘Isn’t that hopeful?’ one may ask, without grasping the inherent darkness in their decision.

The car-wash serves as one of the primary metaphor the slow automatic movements of the characters, the sense of being stuck, and the powerlessness to breakaway from the routine. The process of cleansing at each part seems to indicate a new beginning, although ironically the succession of events only pushes them further into the void. Not only the cleansing of the car, but also other physical forms of washing (static shot of Georg taking bath) or the distractions provided by TV or radio represents the family’s little attempts to transcend the tedious nature of their existence. All of the family’s efforts are thwarted by the omnipresent oppressive environment. The physical intimacy, the efforts to intermingle, showcase of love, the hope for promotion (or wealthy existence), the calmness derived from gazing at a fish tank, and the prospect of vacations are all upended by the ocean of oppression that turns them slaves to mindless routines. In that stormy, subjugating environment, these people are afloat like islands, searching for a purpose or happiness to hold onto. And, despite Haneke’s subtle visual clues to the themes, we are able to contemplate and connect deeply only when we relate our own emotions to that of the characters’ plight. 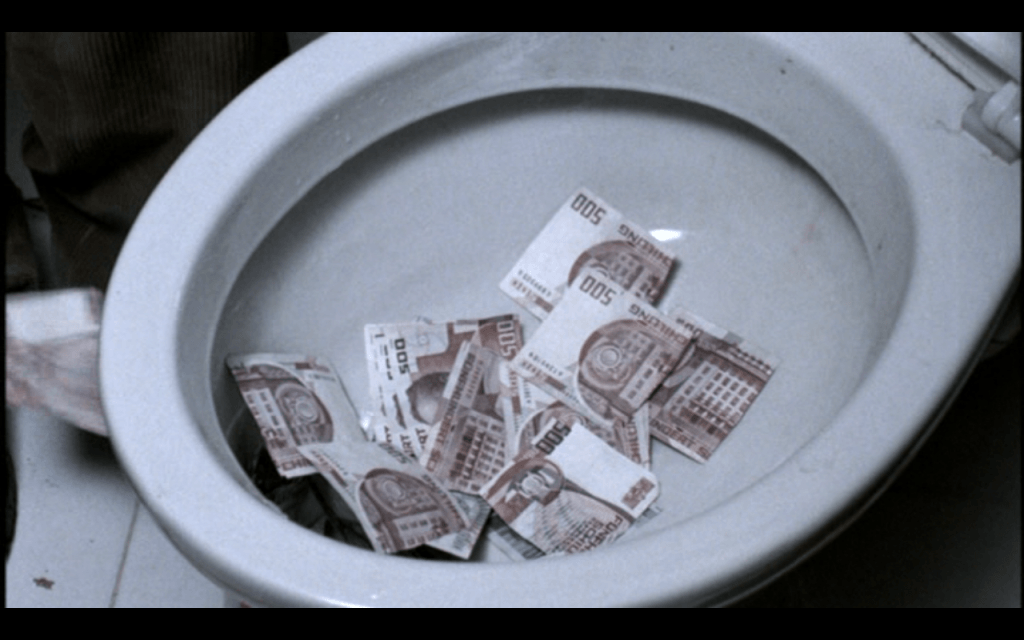 What makes “The Seventh Continent” a powerful experience for me is the ability to perceive Georg, Anna and Eve’s anguish. Even though I don’t have concrete explanations about their decision to commit suicide (don’t you think suicides provoke more questions than answers?), I could relate to that existential pain; to that hunger to breakthrough from futile routine. Of course, we are not meant to know the root cause of the suicide decision because like majority of us modern humans, they can’t effectively communicate (don’t we all keep our inner pains locked inside deeply, without being able to communicate it?). Director Haneke wants to convey, how for us –people looking from outside – it is hard to understand why it happens. Haneke keeps us locked inside the garage or bedroom as the characters move out and conceals the faces to notify that ‘you can never truly know why these people did it’. Of course, a transformation always happens in Haneke’s films. Alas, this transformation only makes the human automatons to clearly perceive the bleakness of living.

The true feelings Anna shows at the car wash (in the 2nd part) is the starting point, where inner anguish is transcended and the family believes in going to the undefinable ‘seventh continent’. The ‘systematic destruction’ in the end was filmed with such a methodical precision and shock values. Haneke offers a striking final shot of dead Georg, whose dead eyes looks at the scrambled television screen and then the shot is juxtaposed with recurring shots of car-wash, windows and other screens. In that haunting scene, the director seems to indicate how our own utopian life style is no different from that of the characters we viewed on-screen. So, Haneke isn’t just delivering a shock; he also makes sure that we feel that pungent taste in our heart.

The Seventh Continent (108 minutes) takes a distressing look into the darkest crevices of human nature. The sublime, disjointed visuals’ incisive depiction of urban alienation offers no comfort or rational explanation.

The Blackout [1997]: The cost of fantasy revealed in this ‘90s masterpiece