Home»Reviews»Rewriting History with the Ink of Film: Once Upon a Time in Hollywood [2019]
Reviews

Fifty years ago today marks the fateful day the Manson murders took place on Cielo Drive, reverberating from the Hollywood Hills out to the entire world. Quentin Tarantino’s recent film Once Upon a Time in Hollywood, which takes place in the time and place of this event, was originally going to be released on this anniversary, but out of respect for the families of the murdered victims, it was brought forward.

Once Upon a Time in Hollywood ends with some radical historical revisionism – the Manson Family murderers drive up to the house of Sharon Tate and Roman Polanski to commit their murders (as they did in real life), but then Tarantino’s world collides with the real world – Leonardo DiCaprio’s Rick Dalton, heavily drunk from a night of melancholic celebrating, bursts out of the neighbouring house, adorned in a bath-robe and full jug of fresh Margarita in hand, angrily berates the would-be murderers, as they sheepishly apologise and back off down where they came from.

There’s more to this historical revisionism, and if you’re reading these spoilers then you must’ve seen the film (right?) and there’s no point reiterating it to you, but this rewriting and the film itself concludes with the three attempted murderers being brutally murdered themselves, in self-defence. Just when it seems a Quentin Tarantino film seemed so leisurely and not-so-violent, the film remembers who it’s authored by.

Tarantino’s violence is often fun, playful in how it relates to the narrative. But this time, it also has real-world resonation. His aversion to a real-life tragedy and replacing it with a typical movie happy ending, with the bad guys dying and the good guys winning, is a heartfelt artistic expression of peace, tying together both the counterculture’s main theme and the traditional re-equilibrium of the Westerns that preceded this cultural movement.

Through the tale of Rick and Cliff, both trying to rejuvenate their dwindling work in tinsel town, and the adjacent life of Sharon Tate, simply flowing with the LA life with no conflict, these true and half-true moments all lead up to an ending of actual history. I wondered at times throughout the screening how Tarantino would pull it off: it didn’t seem likely he would show it in its grisly detail, but would he end this film before the event or after? It turns out kind of neither.

Once the car of the Manson family murderers pulled up on Cielo Drive, I felt deflated that Tarantino was indeed including this real-life history into this film that was otherwise a product of his own imagination. But then the historical rewriting of a movie-related life occurs, which is both very funny and very gruesome, but then results in a touching moment of “what could’ve been…” 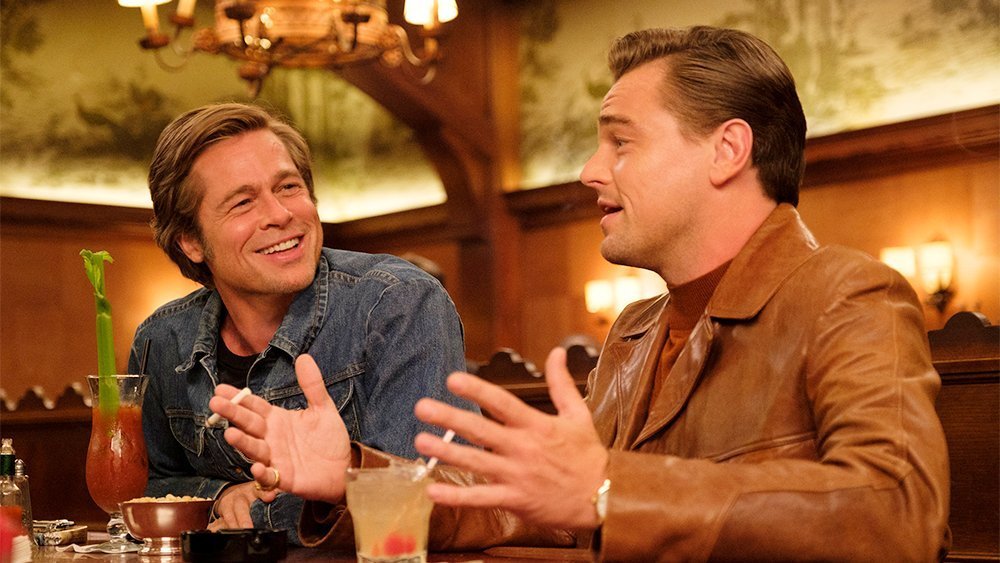 It’s unusual to hear a Tarantino film being praised as beautiful, moving, bittersweet, and moral, despite all the brutal and blunt violence that immediately precedes such a climax. Once Upon a Time in Hollywood is about the joys of life: you can see it with Brad Pitt’s Cliff cruising around ‘60s LA’s traffic-less freeways or Margot Robbie’s Sharon Tate revelling in delight on her own as an audience laughs and cheers at her during a screening of her own film.

Also, read – Once Upon A Time in Hollywood Review

Rick is stressed-out in his Hollywood actor kind of a mid-life crisis (the worst kind), but Cliff acts as his emotional counterpart, accepting of life’s casual and accessible joys, though similarly while trying to rejuvenate his own career, but without the emotional breakdowns.

This re-imagined ending accentuates the film’s messages of peace and love, especially towards yourself and your own life. This film ponders ‘Once Upon a Time…’, the title of which appears as Sharon Tate, Jay Sebring, and their off-screen guests as they invite Rick over for a drink, living away from their lives as they didn’t in real life. This is what a film like this is made for, to ponder a better life.

Not to say that if these murders never happened, we’d all continue to live a life of hippy utopia – it’s likely the Summer of Sam and Ted Bundy killings would’ve still occurred, as would have the rampant increase in crime and hard drugs across America, but just to have just six less innocent lives taken, or even one, is a notion Tarantino is maturely and artfully proposing.