The island of Sicily in Italy was invaded by the Allied forces in 1943, indirectly leading to the reemergence of mafia-related activities which were said to be vehemently suppressed under the Fascist rule. Similarly, the penury and solitude pushed the impoverished flocks of ordinary Sicilians to depend on the black market. It was at this time the young and exceptionally handsome Salvatore Giuliano shot dead a policeman when he was nearly caught for running contraband materials. He ran into the mountains and became the most ambitious and dreaded outlaw until his death seven years later (in July 1950). The year 1943 was an important one in the history of Sicily apart from the event that turned Salvatore Giuliano into a folk hero, a myth. The Allied invasion of 1943 brought out the outcry for Sicily’s independence (secession) from Italy. Meanwhile, Giuliano unlike the other bandits haunting the sun-baked mountains of Sicily styled himself as a Robin Hood by robbing the rich landowners, usually protected by ‘Friends of the Friends’ or the mafia. Soon, the bandit attained a legendary status, forming his own small gang and gaining the fierce support of the locals.

This caught the attention of separatist forces which enlisted Salvatore Giuliano’s help. Unfortunately, the separatist movement was short-lived. It was pushed into oblivion after the enforcement of civilian rule in Italy, in 1945. The much-expected amnesty for political rebels was not offered to the Sicilian bandits, and the new Italian government sent the carabinieri (military police) to hunt down Giuliano. Since the legendary bandit received some sort of protection from local police and the mafia, the carabinieri faced an uphill task. Furthermore, Giuliano was shrewd and tenacious in waging the guerilla warfare. But the massacre at Portella della Ginestra in May 1, 1947 (during a rally of unarmed communists and socialists) brought unwelcome attention to Giuliano, undermining his heralded position as the egalitarian revolutionary. It’s a mystery why Giuliano’s gang fired at unarmed demonstrators (at a crowd with lot of women and children), murdering eleven people and injuring twenty seven. Moreover, the mafia’s support for Salvatore Giuliano rested only on shaky grounds. Therefore, after a series of alleged betrayals, the 28-year-old bandit’s bloody, lifeless corpse was ‘seen’ lying on a courtyard on July 5, 1950. 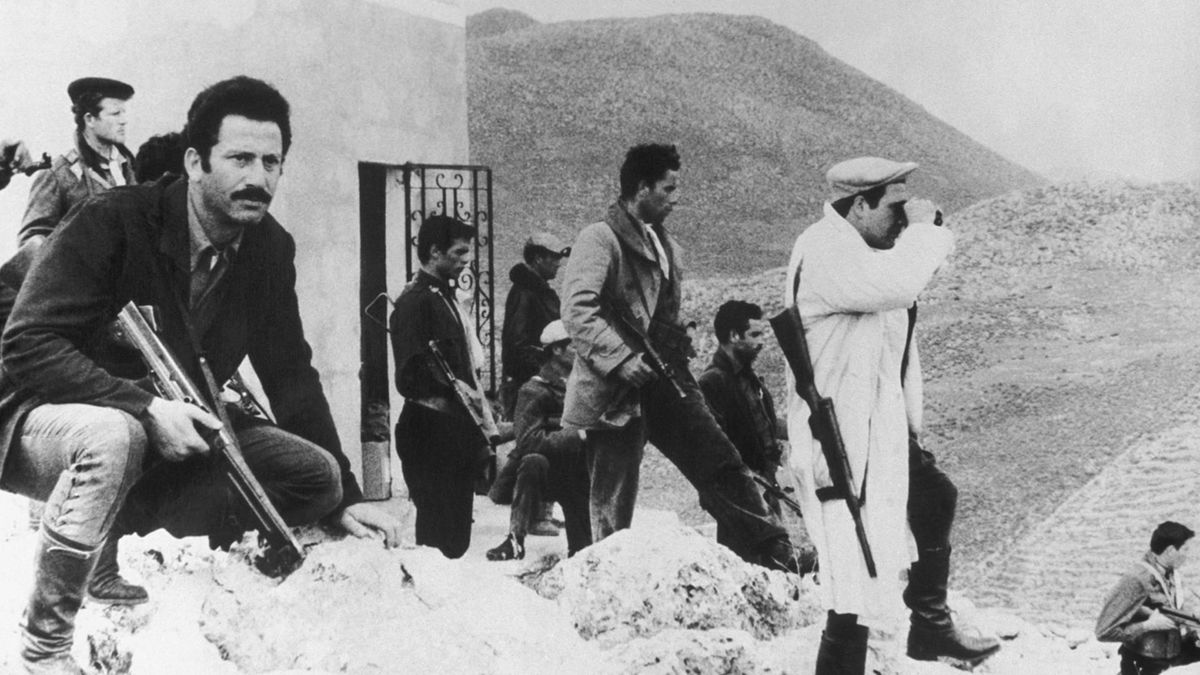 What’s primarily interesting about Francesco Rosi’s Salvatore Giuliano (1962) is that it isn’t a typical (dramatized) biography of the titular character (if you care for an entertaining, mythologized version read Mario Puzo’s 1984 novel The Sicilian, but stay away from the abominable movie adaptation by Michael Cimino). In fact, there’s not a single close-up shot of Giuliano. His face is often unseen or rendered obscure in movement and his tall frame only looms at the corner of a frame. Rosi simply uses the enigmatic hero to document the political and social reality of the times. The film-maker also attempts to look into the mystery of Giuliano’s death, traveling as closer to truth as possible.

Critics consider Rosi’s realist aesthetic to be the precursor for the era’s hard-hitting political films like Gillo Pontecorvo’s Battle of Algiers (1966) and Costa Gavras’ Z (1969). Rosi’s clear-eyed look at the hidden power dynamics behind an infamous political murder also finds its echo in Oliver Stone’s JFK (1991) although it’s an unsubtle polemic compared to Rosi’s seminal work.

The film opens with the high-angle shot of dead Salvatore Giuliano lying on the ground. A man nonchalantly inventories the possessions of the bullet-ridden corpse, later allowing the frenzied reporters to take photos. Policemen, reporters, high government officials, and ordinary Sicilians are seen in the frames, but director Rosi doesn’t attempt to single-out any particular personality and turn viewers’ attention into that person. Without breaking our puzzlement, the non-linear narrative moves to the year 1945 Palermo as a voice-over explains the historical and political background which facilitated the rise of separatist movement in Sicily. Rosi’s emotionally distant and neutral camera witnesses the separatists seeking Giuliano’s support, believing in his supreme ability to resist the authorities of mainland Italy. By the year 1947, when it becomes clear that the promised amnesty would never come (and after the fall of separatist movements), Giuliano escalates his well-planned kidnapping and robbing schemes. Interestingly, the all-powerful Sicilian mafia and some of the civil authorities shielded the bandit for years, not because they accepted his armed struggle or followed the code of omerta, but because he knew ‘too much’ about them (which he was supposed to have noted down in his secret diary).

Throughout Rosi’s unrhythmic and complex oscillation between the present (set in the immediate aftermath of Giuliano’s death) and the past, only one character seems to have had first-hand knowledge of the double-crossings that led to the bandit’s killing: Gaspare Pisciotta (Frank Wolff), Giuliano’s first cousin and his first lieutenant. Pisciotta’s testimony at the court offers incendiary truths, providing few hints on the powers-that-be involved in the killings at Portella della Ginestra and the foxiness of mafia and the carabinieri. The answers to the questions of who killed Salvatore Giuliano and the ‘why’ is also found in Pisciotta’s ferocious testimony. But Rosi doesn’t treat this as the most definitive version. The director is rather intrigued by the elusiveness of truth, cloaked in the wall of silence erected by the shared efforts of criminals and criminal authorities (or politicians). It’s a theme Rosi kept returning to his later films like Hands over the City (1963), The Mattei Affair (1972), Illustrious Corpses (1976), etc.

Salvatore Giuliano was co-written by Franco Solinas (alongside Rosi, Suso Cecchi D’Amico, Enzo Provenzale), the screenwriter behind the influential political films such as Battle of Algiers (1966), Burn! (1969), and State of Siege (1972). The writing is a lesson in creating mesmerizing politically-aware movies without giving into the tenets of dramatic narrative cinema. Although the film was shot on location in the places where the celebrated bandit roamed and all except two are non-professional actors, Rosi’s aesthetics couldn’t be categorized as a neo-realist cinema. It’s a sort of ‘documented’ cinema, turning the eponymous character into a peripheral figure, while demonstrating a firm understanding of the limits of fictional license in tackling such a sensational material. In fact, the pseudo-documentary structure and a relatively objective outlook eventually transform the dead bandit into the symbol of a nation, disintegrated by arrogant powers.

Rosi acutely demonstrates how common people are caught in the knotted tangles of these violent skirmishes. In one scene, we see the carabinieri in an effort to break-down the people’s support to Giuliano arrests the entire male population of the small Sicilian town who are to be transported to the jails of Palermo. When the news reaches the black-clad mothers, wives, and sisters, a crowd of screaming women rush into the town square to stop that from happening. The women’s protests are thwarted, but the men’s arrest followed with torture however doesn’t provide any fruitful result to the authorities. Moreover, despite the damage done, such inhumane round-ups only seems to strengthen the people’s resolve to stand against their oppressors. It’s a distressing scenario that still finds its relevance in the contemporary world, echoing across all the ‘disputed’ lands or territories. Director Rosi while filming such scenes breaks his static, distant mode of film-making to make the viewers feel empathy. The other example of the director’s nuanced display of empathy is the scene where Giuliano’s mother comes to identify her son’s body. Even though the viewer is never allowed to strongly connect with the murdered character, they can connect with a mother’s irrepressible grief. In contrast, the random shooting into the crowd was mostly filmed in medium camera shot. Yet it conveys the brutality of what happened without getting closer.

Salvatore Giuliano (123 minutes) definitely demands multiple viewings, at least to marvel at the elegant way Rosi moves between different styles (a faux-documentary, an investigative and courtroom drama) and manner with which he probes at the slanted official version of history without passing off conjectures as facts.

Train of Shadows [1997] Review: A Rich tribute to the Visual capacity of Cinema