Mafioso [1962] Review – A Mesmerizing Cultural Comedy with a Bitter Edge

Mario Puzo’s novels and Francis Ford Coppola’s epic ‘The Godfather’ trilogy has pushed cinephiles around the world to equate Sicily with the supposedly venerable and much-dreaded mafias. In fact, the idea of organized Italian crime families has spawned many high-octane works in America like GoodFellas (1990), Casino (1995), The Sopranos (1999-2007), etc.  While the nature of Italian-American mobsters were brilliantly desgined for cinematic purposes in Hollywood, there have been very few Italian movies that dealt with the mafias. The year 1962, however, brought two magnificent yet underappreciated Italian masterworks set in the parched, alienated landscape which is alleged to have fueled the Mafia’s existence: one is Francesco Rosi’s fascinating docudrama Salvatore Giuliano; and the other is black comedy gem Mafioso (1962) from Alberto Lattuada.

Rosi’s Salvatore Giuliano alternately explores the downfall of eponymous Sicilian bandit and the post-World War II struggle for control of Sicily between mafia, separatists, and the political high-command. Rosi’s extensively researched film offered a more scalding portrait of the mafias, delving into the pragmatic stance of these criminal organizations rather than glorify their supposed ‘honor’ and ‘codes’. In terms of aesthetics and storytelling sense, Rosi’s style was later emulated by Gillo Pontecorvo’s Battle of Algiers (1966).

Compared to Salvatore Giuliano, Mafioso could be termed as light-hearted and dramatic. But this is as much a piercing look at the dark side of mafia’s hyper-masculinity, unlike the laudatory attitude exhibited by certain American works. On the outset, Mafioso is a typical fish-out-of-water comedy. It’s humor originates from cultural clash as the respected Milanese industrial worker strives to rediscover his Sicilian roots, who is accompanied by his proper modern Italian wife and two little daughters. Gradually, the glamour of the criminal elements in this quaint coastal town fades, only to be replaced by the brutal reality that promises to devour our hero’s ebullient nature. 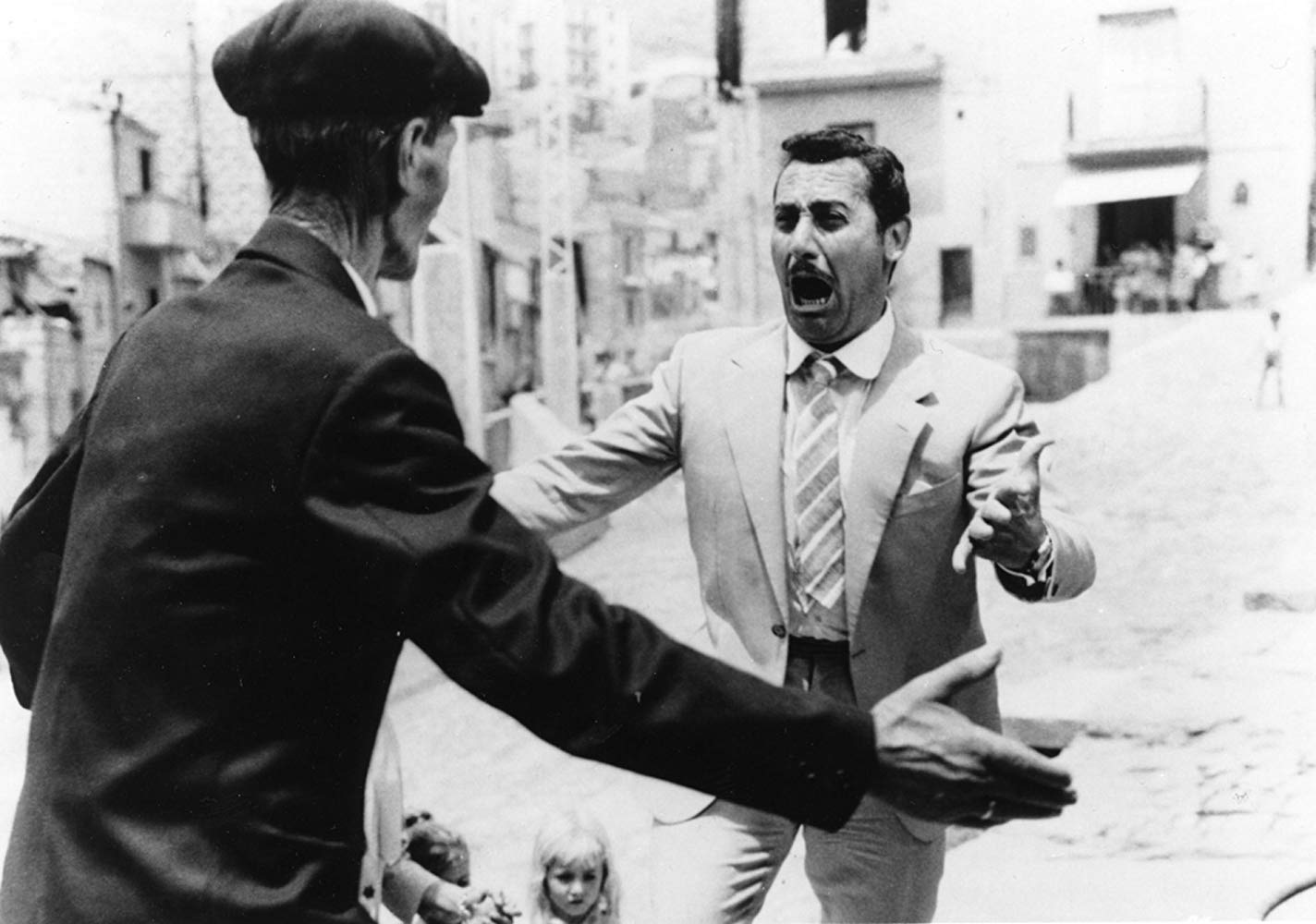 Mafioso (1962) opens at a vast Fiat factory, the clanging of machinery and precise movements of workers despite the soullessness seems to promise economic progress. A foreman in white lab coat named Anotonio Badalamenti (a marvelously dexterous performance by Alberto Sordi) prowls the great industrial space. He is shown to be a fastidious, hardworking, loyal worker who has given up his vacation for years. Now he is about to embark on a 15-day vacation to his hometown, Calamo in Sicily. His extended family has never met his elegant, blonde wife Marta (Norma Bengell) and their charming little daughters – Cinzia and Caterina. Before leaving the factory, Antonio was called by his rotund boss to deliver a package to their mutual acquaintance, Don Vincenzo (Ugo Attanasio), the Silician village’s unofficial ruler who probably secured a position for Antonio in the plant. He is visibly happy to carry out the task and very soon he dashes out of the office, rushes his family to catch the train and then a ferry.

Once the island looms into view, Antonio is giddy with excitement, whereas the nervous Marta sadly looks at the receding continent. Upon reaching the village in Sicilian foothills, Antonio becomes ‘Nino’ as he is affectionately hailed by the genial as well as suspicious locals. Director Lattuada in these early portions plays up with the common stereotype of perceiving urban (Italian) Northeners as stuck up and unemotional, while dirt-poor people of south are touted to be warm and hospitable. Nevertheless, the cartoonish cultural stereotypes gradually fade away (after producing some effective humor) as they get to know each other. For Nino, the trip is all about returning back to his childhood. Subsequently, he is oblivious to the town’s predicament – its poverty, alienation, and enslavement to crime families and paternalistic ‘codes’. Marta naturally dreads the prospect of entering this enclosed world (the contrast between Milan and Calamo feels like as if they have traveled back in time) and initially scoffs at Nino’s youthful enthusiasm.

In Mafioso, Alberto Lattuada perfectly uses the cultural dissonance to extract riotous comedy. Nino and his family’s journey into the village awkwardly halts in front of a wake; the dead man happens to be a mafia victim. Then there’s Badalamenti family’s unbelievably overwhelming dinner. Marta lights up a cigarette – shocking the locals — after thinking the meal is over, only to be said that she has just eaten the first course. Nino (literally) drags his family to pay respects to Don Vincenzo and on the way is compelled to consume more local delicacies. He also comes across his old pals, unemployed, daydreaming and ogling at the opposite sex from the town square. Vincenzo is genial and inviting. He is the benevolent don figure which Nino sold to his family and us. But then the Don is secretly assessing and grooming Nino to take up ‘an offer he can’t refuse’. The inexorable grip of the time-honored traditions slowly disarms Nino’s generous smile. The nostalgia-tinted perception of his feudal home-town turns out to be as much stifling as the menacing industrial set-up.

Director Lattuada’s sharp comic timing and Sordi’s physical comedy are the foremost assets in this effortless descent into the underbelly of postwar Italian society. Similar to postwar Italian film-makers like Ermanno Olmi and Vittorio de Sica, Lattuada immaculately attunes to the neorealist aesthetic, subtly demonstrating the effects of modernization (or industrialization) and the ennui of the ones who are left out in that race. But Lattuada casts off the solemn tone of De Sica to adapt a more mirthful tone, which comes from the zany, ignorant attitude evinced by Nino Badalamenti. Most of the laughs come out of the awkward, tense situation our clueless protagonist finds himself in. However, similar to Olmi’s seminal and tender coming-of-age story Il Posto (1961), Mafioso’s early portions masterfully studies Nino’s compartmentalized world, where he is almost a nonentity,  gently coerced to perform string of duties.

From the moment Antonio, cloaked in white lab-coat, is seen through the aerial tracking shot above the factory floor to the blissful occasion he relaxes at his home’s open living room, director Lattuada observes the slow fading of modern confined spaces (even the mechanical door at his boss’ office hints at his enclosed status). At the same time, the character’s obliviously joyful disposition (back at his home-town) not only turns this into leaden observation, but also a robust comedy of manners. Consequently, just when Nino thinks he is temporarily free from entrapment, the old customs and sense of duty alters his life forever. At last, he returns to the same industrial space as Antonio (it’s the same aerial tracking shot, but he is walking away), freed from nostalgia and bruised by reality.

The depth of socioeconomic message found in this dark comedy plus the efforts taken to demythologize mafias could be better applauded by comprehending Lattuada’s nuanced visual compositions. The gorgeous, geometric, and emotionally attuned black-and-white images perfectly immerse us in Nino’s limited perspective (tempered with effective foreshadowing elements), and elegantly handles the shift in a narrative tone. Moreover, Lattuada has made good use of both abstract aesthetics and gritty visuals of Neorealist pictures.

Altogether, Mafioso (105 minutes) is a deeply emotional and deliciously stylistic tragicomedy that ruminates on the alluring as well as ominous aspects of the inescapable past.

Mafioso [1962] Review – A Mesmerizing Cultural Comedy with a Bitter Edge