“The Fiances (I Fidanzati, 1963) zeroes-in on the solitary longing of a stolid, young blue-collar worker wandering through the bright, windy, and expansive Sicilian landscape.”

Italian neorealist film-maker Ermanno Olmi, who hailed from a working-class background, crafted deeply humanistic narratives that were imbued with compassion, empathy, and poetic subjectivity. The sense of intimacy and humanism Olmi brings forth in his narratives may not have the sweeping artistic sensibilities of fellow legendary Italian film-makers like Luchino Visconti or Frederico Fellini. But his close and passionate examination of his characters’ existential experience (without dramatization) – often people occupying the lower end of the economic ladder – leaves in our mind a strong and indelible afterimage. In fact, the uncannily elegant visual style of Abbas Kiarostami or Edward Yang seems to constantly refer to Olmi’s incredible imagery.

Olmi proved himself to be a master craftsman in his second film, Il Posto (1961) which looked at the oppressive, regimented aspects of post-war capitalism through the eyes of a young man, freshly recruited for a white-collar job. Il Posto was considered to be Olmi’s most autobiographical film since the film-maker himself worked as a clerk in Milan for nearly a decade. If Il Posto is about the alienation of a shy youth (barely twenty) confined to a desk job in a sterile, windowless big-city company, The Fiances (I Fidanzati, 1963) zeroes-in on the solitary longing of a stolid, young blue-collar worker wandering through the bright, windy, and expansive Sicilian landscape. Despite the contrast in settings, Olmi showcases the experiences of these ordinary workers as they try to adapt to their new surroundings and jobs. Moreover, compared to Il Posto, The Fiances is less concerned with sociopolitical commentary and focuses more on the frustrations of an engaged Milanese couple through a unique, enriching style. 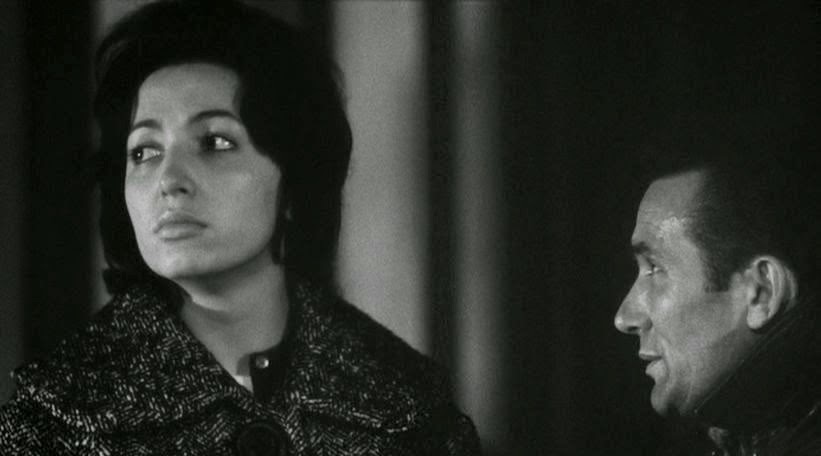 The Fiances tells a very simple story through a complex, immersive arrangement of visuals. The film opens on a tacky dance hall in Milan. A wide-shot establishes the arrival of middle-aged and old couples waiting for the party to start. The hired accordionist and pianist take their places. There’s not much excitement in the air as these couples gather; they must have been visiting the place for quite some time that they dance out of habit to the live music. The central characters, Giovanni (Carlo Cabrini) and Liliana’s (Anna Canzi) meeting at the dance hall is filled with tension, each not meeting the others’ eyes and barely speaking to each other. The dance hall scene is interspersed with flashbacks, which gradually provides us the reason why the couples are at odds with each other.

Similar to The Fiances (I Fidanzati): Loves of a Blonde [1965] — When Political Practice Invades Youthful Romantic Impulses

Giovanni is a skilled welder, who is promoted and assigned by his company to work at a new construction site in Sicily. He accepts the job, considering it the rare opportunity to earn some money before getting married. Liliana, however, is devastated since they have to separate for at least 18 months. She also fears that the separation would mean the end between them. Giovanni assures her that he is taking the job for the sake of their love. The slow accumulation of details and emotions in this mesmerizing opening scene sets the right tone to later convey the lovers’ profound sense of melancholy and loneliness.

Giovanni travels to Sicily. The drab and cheerless surroundings of the company and small-town only accentuate his yearning for Liliana. The company hotel, the everyday routine at the plant, a flimsily built cubicle for rent, the strolls on Sunday through the stuffy countryside, all of which leaves him with the emptiness he couldn’t articulate. Later, Giovanni finds solace in Liliana’s letters, the unexpected lyricism of her words trigger sparks inside him. The film abruptly yet powerfully closes with a summer storm, probably suggesting that the lovers’ longing for each other won’t be diminished in spite of the external forces.

The Fiances doesn’t have the heavily fractured temporal structure of Alain Resnais’ Last Year in Marienbad (1961), but still, Olmi uses an unusual editing style to enhance the subjectivity of Giovanni’s perception (and also in turn to convey his longing with great eloquence). Olmi pushes us take the quotidian details of Giovanni’s exiled life in Sicily – the heat, the tiny bedrooms, etc – to gradually establish the ‘inner’ narrative, where the intensity of Giovanni’s feelings towards Liliana is affectingly drawn out.

Also, Read — On Body and Soul [2017] — A Whimsical Atypical Romance set in a Caustic Environment

Although there’s not much of story and subtext in here, it remains astounding how Olmi has stitched together the visuals of actors’ simple emotions and the drab surroundings to create such a distinct cinematic experience. Olmi and his cinematographer Lamberto Caimi’s comprehension of the characters’ conscious existence remain more than mere documentation without ever becoming overly arty. The fresh and authentic presence of non-actors Cabrini and Canzi also brings to the narrative weight, a genuineness that works well with the poetic rhythm.

The tale of lovers taking each other for granted, only to understand the beauty of their moments together in separation may sound a bit ordinary. Nevertheless, Ermanno Olmi’s aesthetically mesmerizing portrayal of the longing of a couple disunited by the conventional socioeconomic order (industrialization, in this case) in The Fiances (77 minutes) is absolutely stunning and singular.

The Fiances (I Fidanzati) Trailer

The Laundromat (2019) Netflix Review: A complex subject presented in a satirical manner