The past couple of years has proven to be a great time for fans of heist films. Pierre Perifel brought together the likes of Sam Rockwell, Marc Maron, Awkwafina, Craig Robinson, Anthony Ramos, Richard Ayoade, and Zazie Beetz for The Bad Guys (2022). Michael Bay delivered yet another frenetic and dizzying masterclass in action cinema with Jake Gyllenhaal, Yahya Abdul-Mateen II, and Eiza González at the helm. Zack Snyder added zombies to the genre for Army of the Dead (2021). Guy Ritchie dialed down his energy to give a somber Jason Statham in Wrath of Man (2021). And now we have Seoul Vibe (2022) on our hands, which is a South Korean action film that can be best described as an amalgamation of The Italian Job (1969), Ocean’s Eleven (2001), and Fast Five (2011).

Directed by Hyun-Sung Moon and written by Sua Shin, Seoul Vibe follows Dong-Wook (Yoo Ah-in) and Joon-ki (Ong Seong-wu), who return to Seoul in the middle of the 1988 Olympic Games after successfully completing a heist job in Saudi Arabia. They are warmly greeted by their friend Bok-Nam (Lee Kyu-Hyung). But, as they reminisce about Seoul’s past and present, they are pursued by Attorney Ahn (Oh Jung-Se) all the way to their garage/hideout. After arresting them and threatening them with jail time, Ahn recruits Dong-Wook, Woo-sam (Go Kyung-Pyo), Bok-Nam, Yoon-hee (Park Ju-Hyun), and Joon-ki for a dangerous mission. They are tasked with getting into the good books of General Lee (Kim Sung-Kyun) and Chairwoman Kang In-sook (Moon So-ri) and extracting information about the former government’s secret fund. And that involves not just winning a car race but also being very adept at driving so as to carry out deliveries for Kang.

It’s an absolute travesty that we are watching Seoul Vibe for the first time on our small screens. Yes, we should be thankful to Netflix for bringing this to us, or else who knows how a theatrical release would’ve been handled by the distributors. Still, it’s truly a sad state of affairs that this is how we are watching a movie that’s clearly meant to be enjoyed in a packed theater and on the big screen. Every inch of the frame, every joke in the script, every beat in the plot (and the sub-plots), every expression on the talented ensemble cast’s visages, every minute in its understandably long runtime is an absolute blast. Hyun-Sung Moon consistently maintains a campy tone throughout the film. But never at the cost of dampening the tension or anxiety of the scenes where the Sangedong Supreme investigative team gets into murky waters.

The reason for said anxiety and tension is that it’s technically a severe and political film. The backdrop of the 1988 Seoul Olympic Games isn’t just window dressing. But it’s a reminder of when the country broke itself from the shackles of President Chun Doo-hwan, an army general and military dictator who came into power via a coup. Hence, the underlying purpose of this zany mission is to deliver one final (albeit fictional) punch to Chun’s face because everyone loves to see a figure of fascism get ridiculed. However, since it’s a group of commoners (talented but still commoners) going up against a regime that’s armed to the teeth with guns and muscle power, writer Sua Shin constantly keeps reminding us and the characters about the stakes. That beautifully contrasts the snazzy and pulpy heists and makes the group’s eventual victory feel earned and euphoric.

Coming to the aforementioned action-comedy scenes, cinematographer Lim Won-Geun, editor Sun-Mi Heo, production designer Hye-Jung Jin, composers Nene Kang and DJ Soulscape, and the sound, stunt, and VFX teams deserve all the applause in the world. They don’t necessarily reinvent the wheel. But they manage to strike a balance between practical stunts, CGI-heavy visuals, and, most importantly, hilarious reaction shots. Because what’s the point of performing such intricate maneuvers if you never see the character express how they feel about it? Yes, some scenes seem like the actors are in a green screen room, and the car is stationary. And those are the moments where you run the risk of disengaging from the film. However, since they are offset by the sparks of camaraderie and love between Dong-Wook, Woo-sam, Bok-Nam, Yoon-hee, and Joon-ki, you become a little forgiving towards the film’s janky bits.

That brings us to the heart and soul of Seoul Vibe: the cast. The casting department deserves a huge round of applause for their work. The core team of Yoo Ah-in Go Kyung-Pyo, Lee Kyu-Hyung, Park Ju-Hyun, and Ong Seong-wu seem like they’ve grown up together as a family of friends. They are so comfortable with each other that even the most minor hiccups in their relationship feel painful. Yoo Ah-in is undoubtedly the star here, and he delivers a major chunk of the fireworks. But his coolness factor wouldn’t have been as palpable if the rest of the cast didn’t bring their A-game to the table. Kim Sung-Kyun and Moon So-ri are having a lot of fun with their respective diabolical characters. Oh, Jung-se’s no-nonsense vibe has its own flavor of comedy. Song Min-ho and his subordinates are hilarious. Jung Woong-in and Kim Chae-eun are great in their cameo appearances.

Seoul Vibe (2022) Ending, Explained: What Is The Purpose Of The Titular Plan?

You must know three things to understand what happens in the final act. One, Chairwoman Kang gives Dong-Wook’s team the keys to a lavish apartment. Two, someone installs an audio-recording device in the room where Chairwoman Kang meets a trio of corrupt officials. And three, after putting the team through the wringer, General Lee gives them a table clock as a gift. The first two subplots are kept on the back burner, and the third one propels the main plot forward as Lee’s aggression becomes the reason for Dong-Wook’s apparent departure from the team. He has a falling out with Woo-sam, who wants to go ahead with the plan of extracting the details of the slush funds as he has acquired the imprint of the key to the room that holds the documents. That’s when we get a brief shot of that clock in the trash; thereby raising the doubt that it’s a listening device planted by Lee. 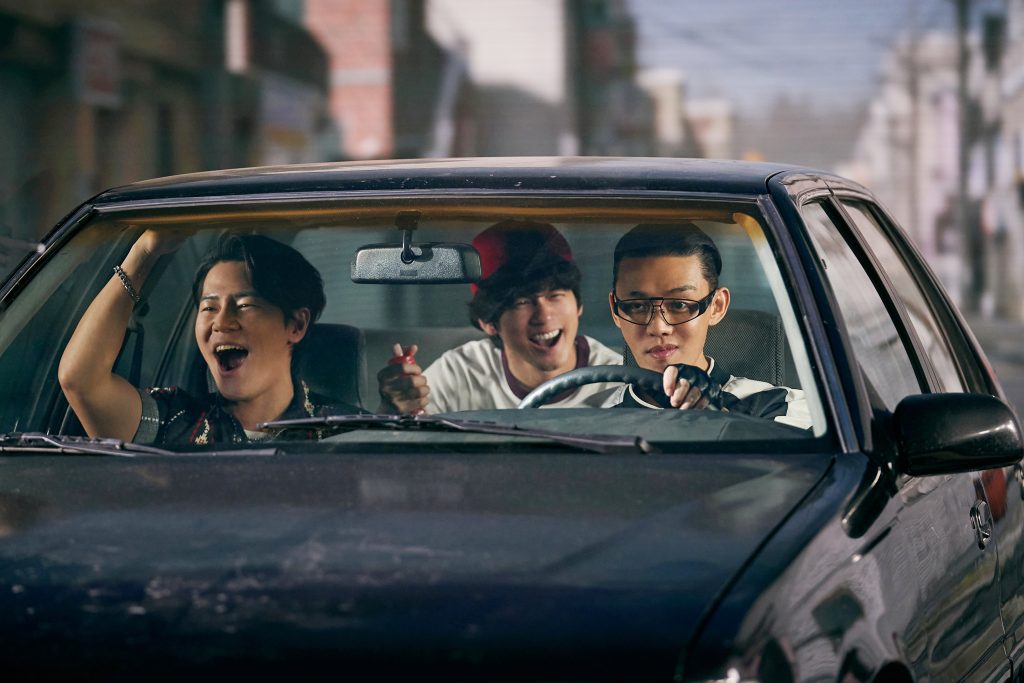 Despite Dong-Wook’s non-involvement in stealing the documents, he does arrive at the last moment to get Yoon-hee out of there. Lee reveals that the clock is an audio-recording device and informs Kang that Dong-Wook and his team are working for Ahn. Based on that information, Kang asks Kim to prepare to move the money from the temple for transportation. She also tells her to have dinner with her later, hinting that she knows Kim’s proximity with Woo-sam.

When Dong-Wook and Woo-sam arrive at Ahn’s office to deliver the documents, they find it has been trashed to bits. They see that the passports Ahn had promised in exchange for the documents lying on the table. They pick it up and decide to bail. But some disembodied screams attract Woo-sam to the roof while Dong-Wook gets to the car. Ahn’s body falls from the roof. And as Lee appears from the staircase, Dong-Wook realizes they’ve been made.

Dong-Wook makes a run for it in Ahn’s car while Lee captures Woo-sam for questioning. Dong-Wook, Bok-Nam, Yoon-hee, and Joon-ki return to their garage only to find out that General has torched everything there. Everything except for the ignition key of Dong-Wook’s father’s car. Lee tortures Woo-sam to get him to reveal the location of the documents.

Kang realizes that he’s going to spill. So, she leaves. But on her way out, she shows Kim’s severed hand to let Woo-sam know that she has killed her for unknowingly helping him. The team finds out that they’ve been framed for the murder of Ahn, and loads of illegal items have been recovered from the apartment that’s apparently registered in Yoon-hee’s name. Realizing that the walls are closing in on him, Dong-Wook goes to an isolated spot and listens to a mixtape. It starts with a song and eventually becomes the recording of the secret meeting between Kang and the three corrupt officials.

Dong-Wook delivers the documents and the mixtape to the Chief Prosecutor (Jung Woong-in) and promises to clear the team’s name and ensure that Lee or Kang doesn’t get their hands on the money. He, along with Bok-Nam and Joon-ki, infiltrate the place Lee is transporting the money. After Kang bids goodbye to Lee, Dong-Wook shows himself, asks him to show if Woo-sam is still alive, and then plays the recording from the mixtape.

Lee learns he will be left behind while Kang and the corrupt officials fly away with all the money to the USA. Dong-Wook offers to help him get to Kang for a meager billion won before the Prosecutor, and his men arrive to arrest him. Left with no other choice, Lee accepts Dong-Wook’s proposal. Then, Dong-Wook recruits Galchi and his minions (because he’s a man short) and then reveals the titular plan. And that plan essentially involves getting Lee and Kang in the same place and then dragging them through the dirt.

While Yoon-hee rescues Joon-ki, Dong-Wook takes Lee and his men on a wild goose chase. Lee unceremoniously dies in a car crash before the Chief Prosecutor gets to arrest him. Dong-Wook boards the plane that Kang is in, along with the car filled with the last goods. He turns on the camera in the toolbox and records Kang admitting that she is corrupt and that she’s running away with a bunch of money. In a fit of rage, Kang tries to shoot down Dong-Wook. To save himself, Dong-Wook gets into his car, accidentally lodges its spoiler into the net holding all the money, and then drives out of the plane. Then he successfully releases the parachute installed in the car and lands safely while making it rain as well (the rain being money from the plane that Dong-Wook dragged down with him). A news report reveals that Kang has been arrested for corruption, and all the people who helped her will also be brought in.

After paying their last respects to Ahn, both Woo-sam and Bok-Nam reveal that they’ve stolen some of the illegal money for their hard work. Dong-Wook drops a bag full of cash to prove that he has stolen the most. The reason? According to him, they need to upgrade before moving to Los Angeles. In a mid-credit scene, we see the Dictator lamenting the loss of his money. He looks up to see a flock of birds flying above him, which proceeds to shower him with feces.

Where to watch Seoul Vibe