Squad (2021) Zee5 Review: For Action film aficionados, the bar is currently quite high, thanks to some recent great action capers like the various installments of ‘John Wick’. However, it does not take much to satisfy audiences of an action film. Closer to home, Siddharth Anand’s ‘War’ featuring Hrithik Roshan and Tiger Shroff was largely a successful attempt at that, despite not offering anything unique. Now director Nilesh Sahay did not have that kind of budget, so expectations need to be adjusted accordingly. Nevertheless, ‘Squad’, featuring the debutante Rinzing Denzongpa and Malvika Raaj, is bafflingly, unjustifiably bad.

Squad (Zee5) opens in, what appeared to be Pakistan Occupied Kashmir; where expectedly kohl-eyed gunmen threatened the Indian counter-terrorism squad with lame lines and intermittent Janabs. Rinzing Denzongpa’s Bhim almost single-handedly saves the face of the Indian squad, with not so much as a scratch on him, but it does leave him mentally scarred as he fails to rescue a little girl used as a suicide bomber.

Three years later, Bhim is once again recruited by his old boss Nandini Rajput (Pooja Batra). A mild persuasion featuring a dance routine by Aria (Malvika Raaj) overcomes the momentary hesitation of Bhim. Nandini Rajput assembles a squad featuring characters that fit their respective stereotypes to the tee. There is a pair of ‘hero’ and ‘heroine’. Then, a comical gun-sexual character who strokes his firearms affectionately and coos over them, a headstrong, and a wild card complete the team. This team needs to rescue a child, who is the granddaughter of a scientist, who is wanted by most of the powerful countries’ secret forces.

The very first glaring mistake that the director and writer Nilesh Sahay makes is that he chooses to elaborate on his already wafer-thin plot; thus creating one ridiculous folly after another. We were told that the scientist, Mr. Banerjee, is coveted by forces because of his invention of artificial intelligence-backed soldiers. Along with some low-budget special effect shots of these cyborgs, Sahay explains that the invention goes awry as these cyborgs could not differentiate between friends and foes. Now, the obvious mouth-opening, the hair-raising question is: How could one renowned scientist invent artificial intelligence-backed soldiers and authorities deploy them too, without going through the very first step of incorporating the knowledge that would differentiate between enemy and ally? 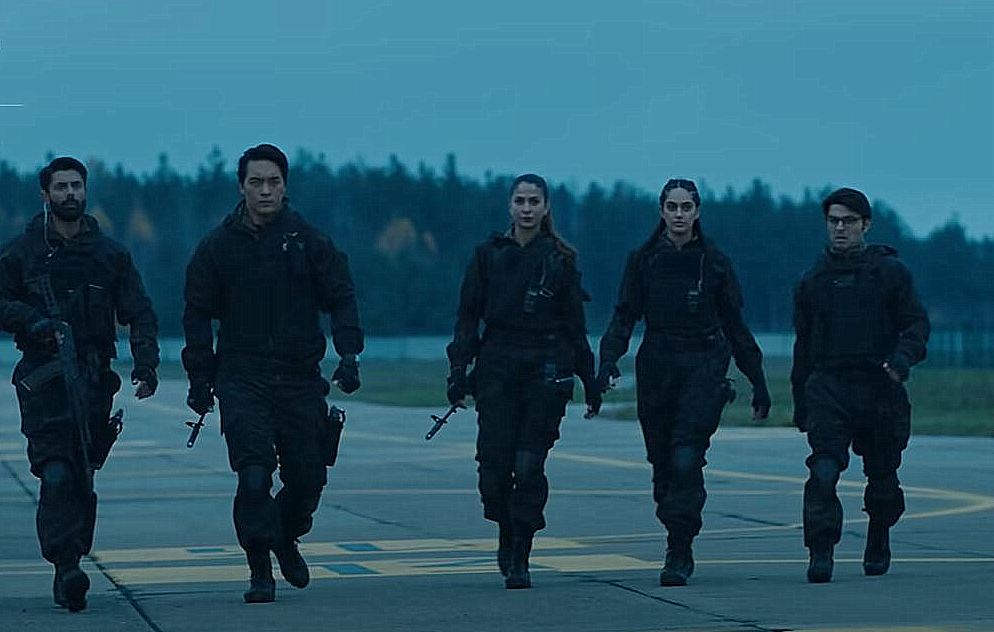 Squad (Zee5) continues to take such liberty of logic as it progresses. It is expected in a standard Bollywood film that the ‘hero’ and ‘heroine’ would eventually fall in love. However, even in some more insipid romances, there is at least a beginning point of the relationship. Here, one would not know how and when Aria fell in love with the almost catatonic Bhim. Most of the relations, depicted in the film, lack the basic genuine empathy that is common in real life.

And the actions do not compensate enough for these gaping holes. The fighting choreography is generic, to say the least. The gunfights hardly have intensity, and the punches lacked the convincing zest. There is an overall lethargic vibe to most of the action sequences, which seriously undercuts the scenarios the film tries to project. And it becomes weird when we see Bhim, whenever he is out of bullets, always encountering enemies who choose to go hand-to-hand combat with him instead of wielding guns; whereas the other members of the ‘squad’ are involved in gun battles.

Rinzing Denzongpa, in his first acting venture, leaves much to be desired. He is stiff in action sequences, devoid of emotions in emotional scenes, and seems to lack any warmth for any sort of romantic escapades. There is much to learn for the son of the veteran and often underrated actor, Danny Denzongpa. But, it is not only Rinzing who disappoints in the acting department. Pooja Batra, for all her experience, is equally clumsy in her deliveries, and most of the supporting cast is no better. Malvika Raaj hammed a lot, but because she was surrounded by worse performances, she comes across a lot better. Only Mohan Kapoor, who played the villain, seemed to be aware of the concept of acting.

The music is intolerably made, and inexcusably used. The hyper-nationalism-on-riff music made its presence almost at a regular interval, regardless of what is happening on screen. It would thoroughly irritate the viewers who might find it in their hearts to give this drivel a chance. Keeping up with its ludicrousness, the film ends with a lookalike of Prime Minister Modi and a hint of a sequel. That would probably be another ‘squad’ to steer clear from.

Special Ops 1.5 (2021) Disney + Hotstar Review - A Very Efficient and Well Made Expansion of the World of Special Ops