Released on the Disney plus Hotstar OTT platform on the 12th of November, Kanakam Kamini Kalaham (KKK) was a particularly anticipated film of the year mostly because of its much-adored male protagonist Nivin Pauly and director Ratheesh Balakrishnan Poduval (of ‘Android Kunjappan Version 5.25’ fame). Seething with a luscious color palette and an almost edible mise-en-scene, the Malayalam film explores alternate comedy in forms of satire, absurd, and slapstick.

KKK is a story of a married couple Haripriya- a bygone TV serial actress and Pavithran- a junior film actor. In an attempt to save their marriage which is hanging by a thread, they take a trip to the nearby town of Munnar to stay in the resort ‘Hill Top’. If you were amused by the aesthetics of the film from the opening sequence, wait till you reach the ‘Hill Top’ resort (more on that later). So what seemed like a harmless romantic getaway turned foul when Haripriya discovered that her pure gold earrings had been stolen. What follows is a hilarious drama packed with rambunctious laughter and intriguing plot lines.

The arrival of the couple at the ‘Hill Top’ resort also unzips a tapestry of supporting actors in the form of the madcap hotel roster. There are bell boys, hotel staff, and guests in the form of writers and psychologists who each have a depth of character and a background story, which further aids in elevating the film. If that was not enough, the director went overboard to add Megha as the girlfriend of Joby (played by Vinay Fortt)- the hotel manager who had a fully developed character arc, but had no real screen presence and only remained a phone voice. All of the little nuances and rapt character developments only helped add the ‘umami’ to the whole film and balanced it exceptionally well. 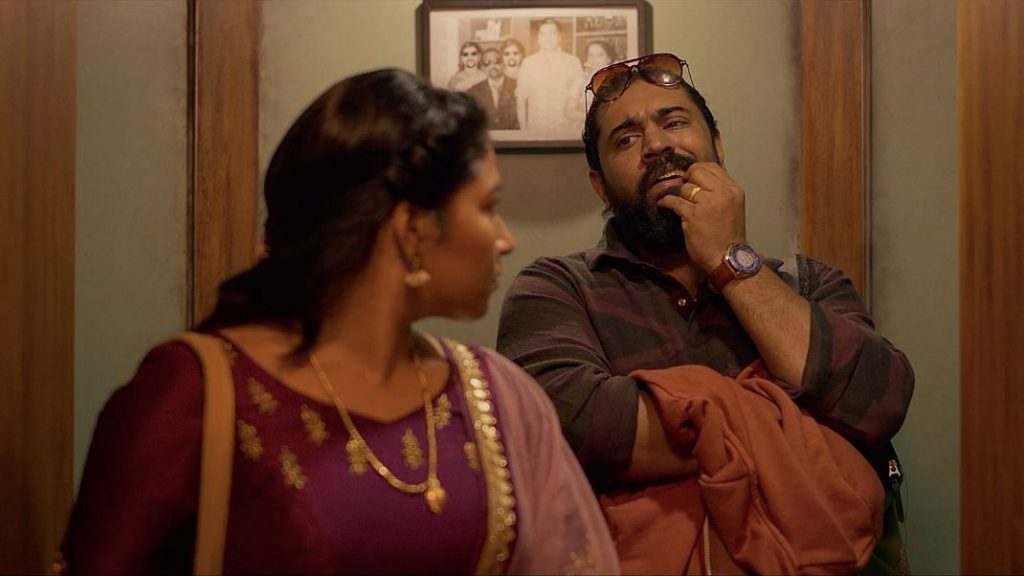 Rife with adept match-cuts and intelligent cut-aways, Kanakam Kamini Kalaham is a melting pot of classic references and pays homage to archetypal films and novelists. Sundry instances in the film will make you feel like you are reading a PG Wodehouse novel with little hints of musical and experimental comedy. However, the hottest revelation for any film enthusiast watching this film will be the motley of references made from cinema all across the world. The most obvious one of which is Wes Anderson’s ‘The Grand Budapest Hotel’; KKK has the ‘Grand Budapest’ painted all over it- in the red color-coordinated theme, the well-dressed staff, a slightly vintage vibe of the ‘once-grand, now drab’ hotel, and of course the quintessential bellboys.

There is also the patented scene from Stanley Kubrick’s ‘The Shining’; twice you will see the old blood-curdling scene of that kid riding a small bike in the hotel lobby. Yet another example is Hitchcock’s famous behind-the-shower-curtain shadow scene from ‘Psycho’ that has been well adapted here. Besides, even the dialogues are loaded with film references. Like in the scene when a Muslim bellboy was blamed for the theft, he immediately blurts, ‘My name is Manaf Khan but I am not a terrorist.’ We will leave it to you to watch and spot the other references on your own. And maybe come back and tell us in the comments later.

In addition to that, one aspect of the film that needs to be talked about and acknowledged is its portrayal of alternative comedy in combination with the drama which remarkably rises in tempo with the arc of the narrative. What began as an anecdotal comedy keeping in mind the routine riff raffs of a married couple, moves on to explore satire, topical, slapstick comedy, and more. It talks about the overacting in daily TV soaps, it shows synchronized action scenes where a character breaks a flower pot on another’s head, and another, when someone pukes on someone else. It even has a scene when someone tells Pavithran- the husband (played by Nivin Pauly), ‘You look like Nivin Pauly, you should be an actor.’ 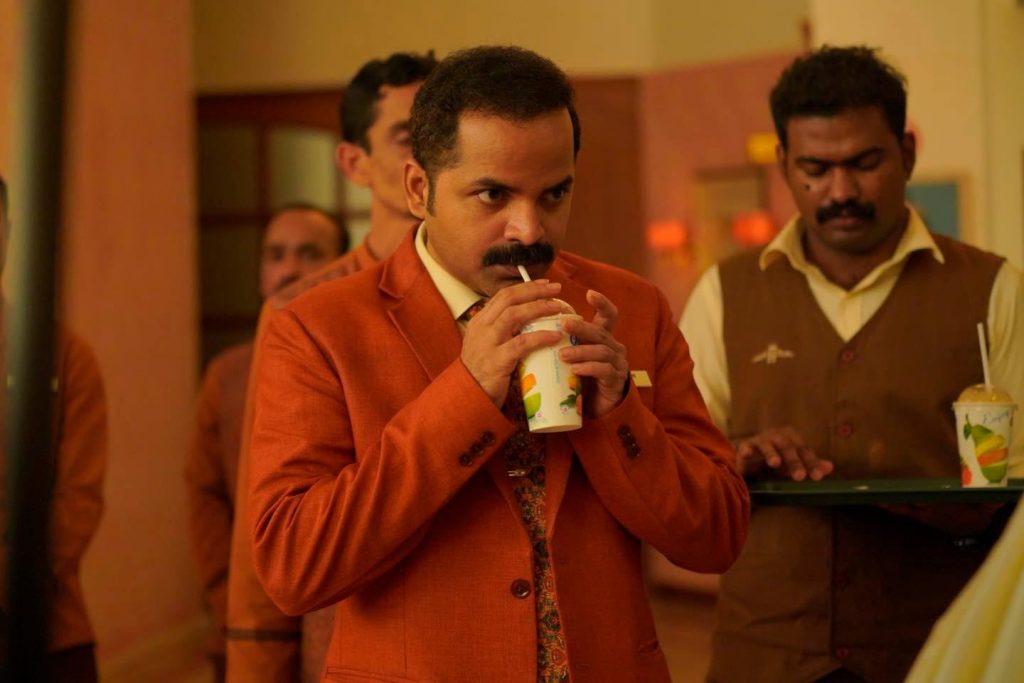 In short, there is not even a singular long-ish sequence that you can go without letting out a chuckle or (in the best case scenario) a loud laughter roar. Even the emotional scene when Haripriya starts crying towards the end of Act 2, there is an immediate upliftment of mood and wit, with the entry of a wedding band and a ‘Just Married’ couple followed by the comical dance of the bell boys to their tunes.

Also on Hotstar: Special Ops 1.5 Review: An Efficient Expansion of its World

Apart from the regular drama, narrative, well-developed characters, the filmmaker has not lost his voice in raising some very relevant social issues. You will find hints of these underpinning the storyline all throughout. There is a progressive mother-in-law who supports her daughter-in-law and criticizes her ‘good for nothing’ son. And then there is women’s solidarity between Haripriya and Shalini, as they immediately feel compassion towards each other after they get a better understanding of their situations. KKK also drops truth bombs and facts every now and then by stating things like, ‘Art is the fourth pillar of society.’

The only thing that irks me and doesn’t sit well with me is that despite the several self-aware jokes made on Manaf Khan, he is still shown as polyandric. But that fact aside, and all things considered, Kanakam Kamini Kalaham is a delightful watch packed with some ingenious acting, light-hearted comedy, and distinctive visuals that will keep you hooked for the most part. The resolution is bang on and it even has an epilogue to satisfy your curious cravings. Streaming on Disney plus Hotstar now, just in case.