"Suleiman Mountain" is an understated debut. The power of the film lies in its exploration of the human psyche that is responsible for making decisions.

More than anything, Elizaveta Stishova’s debut feature “Suleiman Mountain” screeches at the vulnerability of human beings. The vulnerability that often tends them towards lies as they crave for a gleeful future. Culturally significant & morally ambiguous towards the fate of the dysfunctionally broken family at its center, Stishova explores the futile nature of trying to work things out in a surrounding that can never be fixed with abysmal magic.

Hinging the film around the healing powers of Kyrgyzstan’s Takht-i-Suleiman mountain, the film that starts off as a child’s identity confusion tale soon turns into an unconventionally comic & tragically piercing road-trip drama about a con-man & his two wives swindling around the countryside. Each of the women looking for a shot at the silver lining. However, the silver lining here is mostly just finding a home to be in, and a family to come to at the end of the day.

Karabas is a con-man who is always on the run. It’s mostly because of his various antics but also because there’s a child in him that hasn’t grown up. Karabas comes off a complete asshole but we are also able to understand why two women (one of whom is self-sufficient) wish to have a family with him. After his son Uluk, comes back into the equation of his con-manship, Karabas reconnects with his older wife who is desperately trying to have a family at any cost. The young, mostly naive wife, on the other hand, is also pregnant with his child.

Stishova’s film takes us on the journey with these bunch of unpredictable characters as good and bad things happen in requisition. The journey more than once touches the mountain. However, the people who heal are also in the need for some healing and that is what forms the crux of “Suleiman Mountain.” The film’s ambiguity is the unprecedented human nature of its central man. For him, women are possibly just child-producing machines. For the women, he is someone who they need and also someone who they think can be healed by basically just circling along the foothills of the mountain and a shot at fatherhood that can magically fix him. 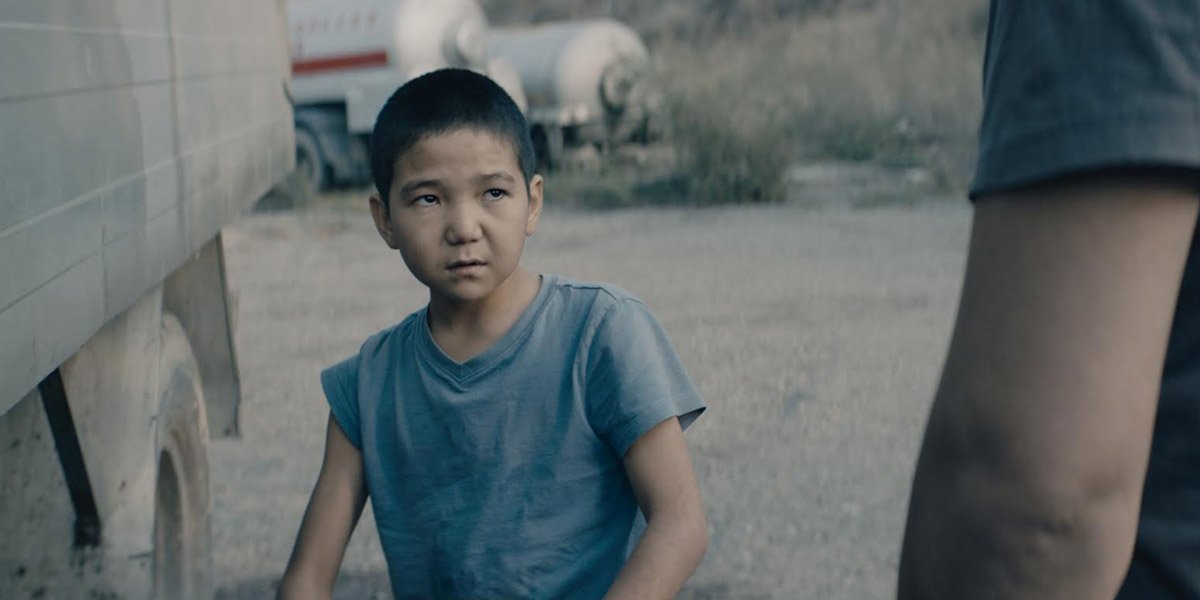 The film is set between Karabas’s conniving & selfish ways to keep his truck (a metaphor for his escapist life) moving & the positive and concerning attitude of his son Uluk. In the mix are the healer woman & the young flame that Karabas has to choose between. Which makes the film a counterpoint for the good & bad in succession. While it gives untimely depth to the recurrence of things, it also becomes quietly predictable in spite of having unpredictable characters at its center. The concerning issue also lies with the reference of the ‘Epic Of Manas.’ Was it meant to put Karabas as the heroic front? Or is just put in there for being culturally significant?

“Suleiman Mountain” is an understated debut. The power of the film lies in its exploration of the human psyche that is responsible for making decisions. While not governed by want but need, the decision often shapes the way our life becomes an entity where one is surrounded by a crowd we don’t know anything about.

‘SULEIMAN MOUNTAIN‘ PREMIERED AT THE 2017 TORONTO INTERNATIONAL FILM FESTIVAL UNDER THE ‘DISCOVERY‘ SECTION.
CLICK HERE FOR OUR COMPLETE TIFF COVERAGE.