The Tale, a haunting tale of sexual abuse, also serves as an interesting study of memory’s tricky nature alongside its restorative power. Writer/director Fox continually hint at the fractured nature of memory as one takes a treacherous walk down the past.

For the past three decades, Jennifer Fox has produced and directed documentaries, taught masterclasses in universities around the world. She has hopped around the world to confront difficult truths. Now at age 59, Jennifer Fox has opted to make her first feature film, which as one could expect from a documentarian, deals with truth. However this exploration of truth is both intensely personal as well as uncannily scrutinizes exacting societal demands and false assumptions. A decade earlier, 48 year old Fox discovered that she has been lying to herself about her ‘first relationship’ with her 40-year-old track coach, who took her virginity when she was 13. For much of her life, Fox has suppressed those confounding evenings her pre-pubescent self spent under the covers, consenting to the sleazy whims of the manipulative adult. With autobiographical work The Tale (2018), Jennifer Fox devastatingly and powerfully investigates her malleable memories to comprehend the complex truths behind the child sexual abuse. Naturally, the film is shocking, although it doesn’t treat its subject matter in an exploitative or sensational manner. 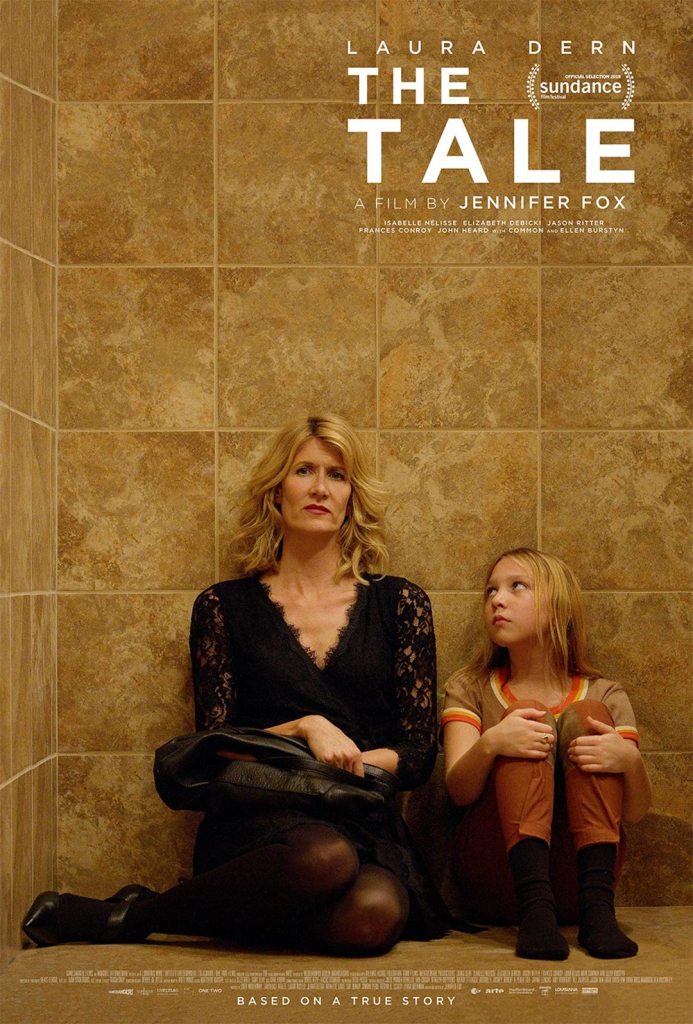 Laura Dern plays Jennifer Fox and insists as the film begins, “The story you are about to see is true, as far as I know” (Fox also says that certain ‘identifiable details’ about the tale is altered). Being a documentary film-maker, one could wonder why Fox chose to make a feature film, instead of a documentary. But Fox’s intention wasn’t to stack up evidence against the alleged perpetrator and simply epitomize it into a reference point for social-media boosted movements. In the wake of Harvey Weinstein’s sexual misdeeds and many other similar scandals in Hollywood, The Tale definitely comes across as timely. But Fox’s journey from within to unravel the bruised memories of her 13 year-old self glistens with creative storytelling technique and profound thematic underpinning that’s not limited to time and place. In fact, more than documentary the fictional realm easily disunites people from their prejudices and preconceptions to experience the suffering of a fellow human being as it is. In a way, The Tale also reminded me of Sarah Polley’s brilliant documentary Stories We Tell (2012). Although not a story of sexual abuse, Sarah Polley like Fox was interested in exploring the disconnect between memory, rediscovery, and the complex truth we all confront while shining lights upon the hidden facets of our own past.

The film begins with Laura Dern’s Jennifer Fox receiving visibly distressed calls from her mother (Ellen Burstyn) regarding a short story her daughter has written when she was 13 (the story entitled ‘The Tale’ was found while cleaning the house). Even Jennifer is startled by what she has written, which provokes a deluge of long-forgotten memories. She’s suddenly overwhelmed by the recollections of spending the early 1970s summer, riding her horse at a farm owned by young and luminescent Mrs. G (Elizabeth Debicki). Lonesome and yearning for affection, 13 year old Jenny Fox (Isabelle Nelisse) hoped to forge a strong friendship with Mrs. G and her handsome neighbor Bill (Jason Ritter), a famous track coach. In the story she wrote, Jenny remarks: ‘two very special beautiful people who I’ve come to love dearly ……I’m lucky enough to be able to share in their love’. Bill and Mrs. G flattered the lonely kid and addressed her as a mature adult (or as a equal) so as to form a ‘secret relationship’.

In the present, Jennifer Fox decides to track down elderly Bill (John Heard) and Mrs. G (Frances Conroy) — both withered and shriveled up like fig leaves in autumn — and also other friends at the farm. Furthermore, she hopes to latch on to the unwavering truth by fishing through the slippery stream of memories. For multiple weekends, Jenny has been gently coerced by Bill to spend time with him at his home. And, it’s fair to warn viewers that Bill’s manipulation of pre-pubescent Jenny into having sexual relations with him is portrayed through highly disturbing details. It’s not explicit but all the same not easy to watch. Jenny really believed that she was Bill’s secret love and kept on lying to her parents about her weekend rendezvous. What’s more horrifying is the role of Mrs. G in Bill’s grooming of Jenny. Both young and adult Jennifer balks at the notion of labeling themselves ‘victim’. But adult Jennifer wonders how her 13 year-old self thought of this sexual connection with the coach as special and even unique. She has been so confident about her relationship that she then wrote a school essay about it. It was 1970s and the teacher reading the essay of this wealthy and precocious suburban girl felt it was just another made-up tale. However, red flags raises within Jennifer’s mother when she reads the same, three decades later. 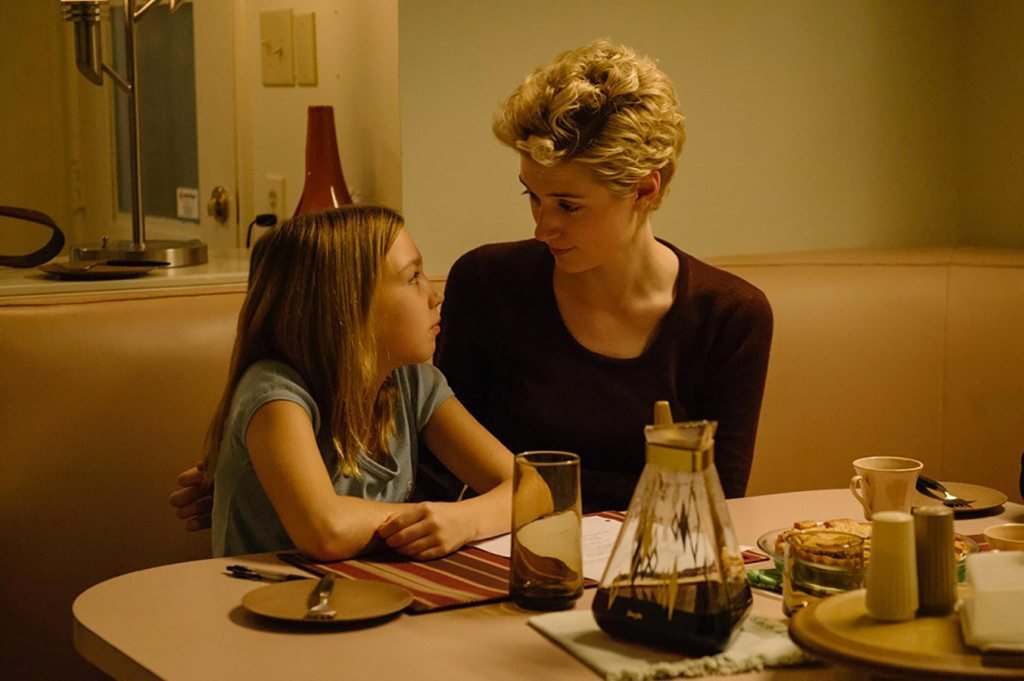 The Tale is an interesting study of memory’s tricky nature as well as its restorative power. Writer/director Fox continually hint at the fractured nature of memory as one takes a treacherous walk down the past. Early in the film, we see Dern’s Jennifer rebuilding her mind image of Mrs. G, Bill, and herself. The first time 13 year-old Jenny, accompanied by her father, meets Mrs. G, we see a tall girl (played by Jessica Sarah Flaum) on the cusp of womanhood. Later, when 48 year-old Jennifer visits her mother and goes through the old albums, she learns that the mind-image of Jenny she is having is that of her at 15 or older. Now, as she once again swims through the memory-lane the 13-year old Jenny comes across as introverted, more childlike, flat-chested with tomboy-ish looks (played by Isabelle Nelisse). This sudden shift in inner gaze only forebodes more sinister revelations, long concealed from consciousness. Director Fox also elegantly breaks down the fourth wall, framing young Jenny answering the questions of adult Jennifer. It’s just the kind of mind conversation we all have in our mind, scrutinizing our younger selves’ vulnerability and naivete (and in the case of traumatized individuals it’s only more intense).

Within this haunting tale of sexual abuse, the aforementioned storytelling technique offers lightning bolts of truth. At the beginning, such narrative shifts remain jarring. But gradually this set-up pays off greatly, especially towards the end. That imaginary scene, set against the school hallway, where 13 year-old Jenny defends her relationship with Bill also points out at something infinitely complex about the incidents of child abuse. Perhaps, what’s most commendable about The Tale is that it never paints everything in black and white. Bill is definitely the guy towards whom we withhold unbridled fury, but at the same time Fox examines other simple things that led to childhood sexual abuse. The dark force of authority Bill wielded on his innocent athletes, and the child’s yearning to feel loved and feel special also plays an indirect role in this sexual manipulation. By taking Jenny’s side, Fox constantly challenges our preconceptions about child sexual abuse. This definitely makes us uncomfortable, particularly when contemplating young Jenny’s line of thought that somehow affected her entire life (eventually resulting in her disinterest in marriage and children). At the same time, it will spark dialogues on all the complex truths behind sexual abuse. It would be futile to denote what an excellent performer Laura Dern is. Dern’s unshowy approach to the material earnestly conveys her characters’ heavy burden of memories. She faces her disruptive memories with a sense of dignity and restraint. Nelisse’s audacious performance rightly imparts deeply unsettling undertones to the narrative (the scenes between Ritter and Nelisse were mostly constructed in the edit room; director Fox has explained the detailed process behind making these sexual scenes in various interviews). Debicke and Ritter are so subtle in donning their monstrous roles.

The Tale (114 minutes) is a blistering examination of the suffering and confusion of childhood sexual abuse. Thanks to director Jennifer Fox’s clever and boundary-pushing narrative device, the film also meditates on the fallibility of memory and tricky construction of self. It belongs to the long list of emotionally devastating films that’s well-crafted and yet you don’t dare watch it again.

The Gentle Indifference of the World [2018]: 'Cannes' Review