Home»Reviews»Films This Week»Tathagat (2021) MUBI Review: A Poetic Requiem for the Lost Dream, Childhood, of a Monk
Films This Week/MUBI/Reviews

Tathagat (2021) MUBI Review: We are welcomed into the film with a commentary on time – “one always feels the lack of it”. Soon, we are led into the timeless setting of the Himalayas, snow-capped mountains in the distance, and tranquility growing upon the audience like fresh snow. We witness Suraj Singh, a monk who lives atop a mountain with his disciple, Amar (played by Ghanshyam Lalsa) being informed about the death of a certain mausi (aunt) from his village while he is in the middle of conducting a certain ritual. He is distraught emotionally and soon dwindles into a dream that stays with him, and us, for the rest of the film. Director Manav Kaul, also a popular Bollywood actor, a theatre director, and author, weaves his film, Tathagat, in a poetic bouquet comprising Singh’s recurring dream and false reality to produce an ode about growing up and truth, especially centering the monk’s ascetic life.

The dialogues, which are interspersed with silent retrospection and everyday life occurrences, are mostly contemplative. In a particular scene, young Suraj Singh wonders why the town stopped laughing at his father after he decided to become a clown. In another, his favorite chant from childhood – “Everything straight looks upside down” – doubles up as the nature of reflections on water and on life, in general. However, after a certain point in the film, all dialogues cease, as if engulfed by the setting of Singh’s hut.

Related to Tathagat on MUBI: Editing (2021) – A Quirky Take on Memory Making

A poignant background score lulls the audience as spoken expressions start transforming into a surrealist dance and the act of knitting a woolen shroud. The only character in the film whose cajole brings life into the film is the now-dead aunt, whom Suraj had promised to buy bangles for while returning home in his childhood.

The setting of Tathagat (MUBI) compliments Suraj Singh’s inaction and contemplation. Nestled in the mountains, the sunlit meadows, the winding trails, a pristine lake, the snow-capped peaks in the distance, and the trees full of rustling leaves produce a whispery effect, perfect to dive into the in-betweenness of dream and reality for Suraj Singh, played by the talented Harish Khanna. 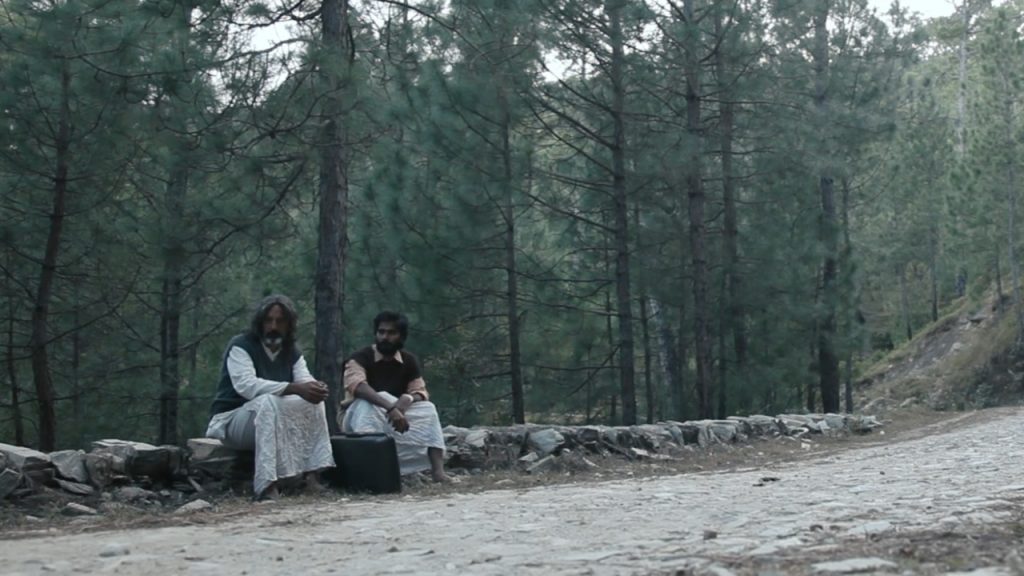 Journey becomes one of the most important metaphors governing this film. Young Suraj undertakes a physical journey to share his secret with the mountains. Older Suraj, although plagued by the decision to make a journey back home, can barely act upon it. His guilt cripples him into deciding to ultimately make a journey – not physical, but spiritual. Young Suraj growing up, not being given any more baths by the mausi (aunt), is a journey that affects his actions and his life, thereafter.

Another interesting journey is that of Amar’s grandfather to the isolated hut, bringing Amar worldly niceties to lure him, a skilled medical professional, out of his chosen life – it is a futile journey but one that bears with it the burden of worldly hopes and dreams. Apart from these, the game of chase that the mausi (aunt) plays with young Suraj forms the portal that links Suraj’s recurring dreams with his wakefulness, sometimes threatening to disturb the audience’s repose with its speed. Like a modernist story, this film travels through the mind of the protagonist only to pose a question at the end of it that seems to embody Nissim Ezekiel’s question about the truth of journeys in his famous poem, “Enterprise”.

Besides the journey, Tathagat (MUBI) comments on the nature of bonds and bondages, parenthood, and love. The characters, featuring Sayani Gupta as Suraj’s mother and Savita Rani as the (in)famous aunt in Suraj’s life, act as foils to each other, so does the character of the disciple and the guru. They become the ‘upside down’, and therefore the mirror image, which makes the search for truth far more nuanced in this story.

Also on MUBI: Lucky Chan-Sil (2020) – A Movie Producer in an Existential Fix

The nostalgia for a sepia-tinted childhood in his ancestral village plays out in bits and parts, possibly pieced together in a way that Suraj’s mind perceives it as an adult. It is wavering but not lost on the audience, kudos to the director. However, the film sometimes starts to feel so deeply involved with itself that the audience tends to disconnect with it at times, particularly the last quarter of the film, where all contemplation draws itself into a pregnant breath caught inside in a little hut on the mountainside. The audience is left wondering outside this hut, to the film’s disadvantage.

Tathagat, in Pali, I found out during a quick wiki search, literally refers to the one who has either “thus gone” or “thus come”, sometimes also meaning the one who has “thus not gone”; Suraj Singh Negi is the tathagat and the film comes as close as it can to portraying this state of mind, albeit with a few hiccups born of mere pathetic fallacy. The continuous contemplation that Suraj divulges in, the film itself, becomes an act of remembrance, a requiem, for the intangible memories of his childhood and an exploration of the process of growth in human beings. It is available for streaming exclusively on MUBI India.

Get one month of Free MUBI Subscription by using our personalized Link: mubi.com/highonfilms

Heads and Tales [2021] 'Zee5' Review: An Average Tale of a confused addressal of a Serious subject