It’s not easy to disassociate the characters that Ayushmann Khurrana has played in his many recent films while watching “Doctor G”. A poster boy for two-tier-city coming-of-age stories, Khurrana has been successful enough in tapping into some of the more poignant aspects of the male protagonists he’s played. His latest opens by addressing this very issue. Uday opens up by talking about how he too, is a liberal and would never behave like a Kabir Singh, but how he still doesn’t understand women. Is merely being a liberal who doesn’t go around shoving down his hyper-masculinity around women enough, though? Should men be praised for doing the bare minimum? Those are the issues that the movie tries to explore, making its foundations stronger than the Khurrana films in recent memory.

In 2012’s “Vicky Donor”, Khurrana played a sperm donor medical intern. Uday from “Doctor G” is struggling with a different fish-out-water situation; a man desperate to pursue osteopathy, he is instead forced to settle for gynecology as a ‘safe’ option. There’s also his blissfully open-minded Mom (Sheeba Chadha), who insists on shoving ladoos into Uday’s mouth or asking him to click pictures to set up her Tinder profile. Fatima (Rakul Preet Singh) plays a senior doctor who’s about to get engaged, and the actress makes the most of a role that could have turned out to be clichéd.

However, it’s Shefali Shah who plays a finger-wagging senior doctor, Nandini, that stands out. The movie cleverly places her character against Khurrana’s. Although some of the cues come off as familiar, the screenplay uses this character as a way of course-correcting the pitfalls of films from a similar oeuvre. It’s safe to say then that “Doctor G” finds its roots through Nandini’s character, who keeps providing necessary reality checks for both Uday as well as for the audience. How does the film reciprocate these checks, then? Well, that’s where the issues of the movie come into play. The makers resort to using animated scorecards to visually echo the way Uday feels out of place with the gynecology department, but there’s a lack of turning this (or anything) into a plot device to explore his self-centered nature and his lack of understanding things from an opposite point of view. 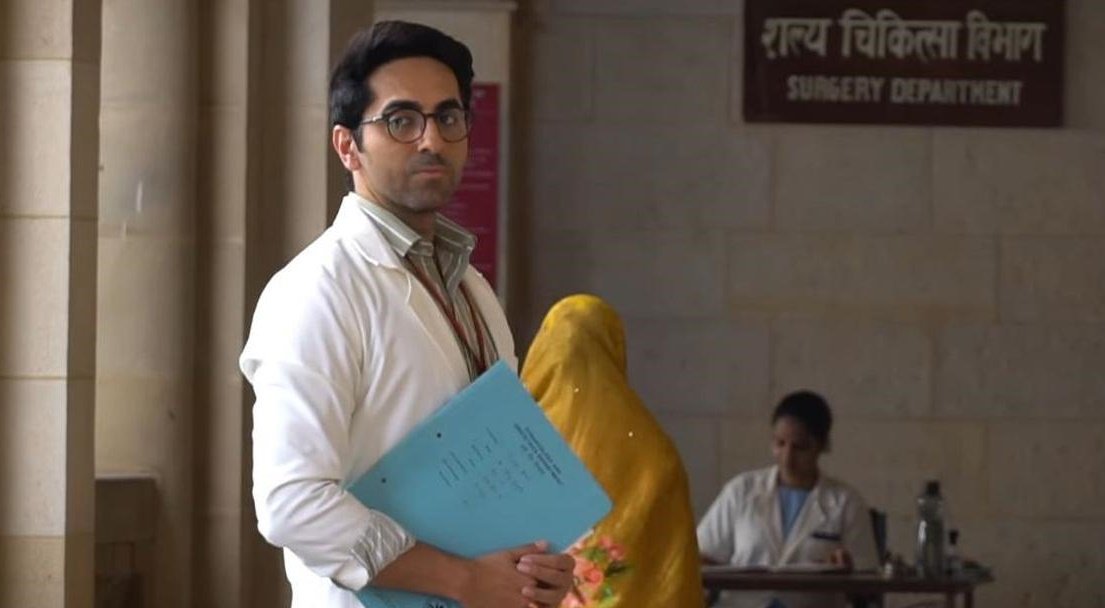 Much like the actor’s other films, “Doctor G” doesn’t add much to its setting of Bhopal. When you’re well aware of using a template that you know has been tried and tested in the industry repeatedly for years, as a filmmaker, you try rooting your characters well in a setting. This way the excuse for making a social film is no longer merely to put out another taboo subject in a didactic way, but of showing how the geography itself folds upon the characters’ lives.

In “Shubh Mangal Zyada Saavdhan“, by placing Khurrana’s partner’s parents in Allahabad, the film naturally added the texture of in-grown orthodoxy, turning it into a narrative device. The characters in “Bala” spoke in Kanpuriya Hindi, giving the screenplay enough heft and consistency even when the second half got meandering. The production design in “Doctor G” is well done, especially in some of the scenes shot around the government hospital our characters spend most of their time in. But the camera is always moving too quickly, disallowing the setting to seep off the screen.

“Doctor G” somewhere benefits from having a female gaze behind the camera. Directed by Anubhuti Kashyap, the film champions gender equality in a rather interesting way. The song ‘Newton’ (Amit Trivedi) reflects the kafkaesque journey of Uday, and there’s a genuine attempt of setting up the deep-rooted complicity and generalizations that men themselves carry upon their backs. The latter of that especially strikes parallels with the character of Rajkumar Rao from “Badhaai Do”. But whereas that film had enough nuances and texture to make it stand out among a plethora of social message-carrying films, “Doctor G” doesn’t fully embrace its self-awareness of reverse-engineering the template’s vestigial organs. There’s enough tweaking to the coming-of-age tale, but never enough to turn it into a memorable watch.

Where to watch Doctor G