There will always be family dramas in our country’s pop culture. Be it any decade, they have always been present in the performance art forms like theater and film. After all, family is an integral element of its fabric and these relationships are what the countrymen often pride upon when they move to a foreign land. There have been many popularized guilt trips like Baghban or Hum Sath Sath Hain that have solidified the notions of familial bonds. Rathnan Prapancha is another addition to the same discipline of films – while trading a slightly different route.

Instead of posing biological relations as paramount, the Kannada-language film tries to ruminate over defining the ‘relation’ itself. How do we decide our family? Is it just a few people that we have been tied by our blood relation? Or do we get to choose and decide based on the ones that stand by and support unconditionally? The film seems to pose these questions.

And this entire premise of Rathnan Prapancha makes any Hirokazu Koreeda fan recall the heartbreaking film – Shoplifters. The Palme d’Or winner had trades on the same lines by deciphering similar notions with a script that is poignant, relevant, and deeply touching. While the Japanese master chooses the scenes and elements from his film in a highly purposeful manner, the Indian counterpart is severely undercooked. For a script dealing with such a delicate, humane issue, it falters repeatedly due to its nonsensical commitment to conventionality.

The film presents the narrative of a common man through the eyes of Rathnakara (played by actor Dhananjay). We meet him during his daily routine from his home to office where we encounter his differing emotional responses. We get a glimpse of his frustration at the workplace – which has more to do with his annoyance at his mother. This maternal character – Saroja (played by Umashree) seems to be the source of his overall demeanor of displeasure – which is showcased as being the only character trait that he possesses. The script might as well have noted the protagonist as ‘an annoyed guy with generic reasons’. 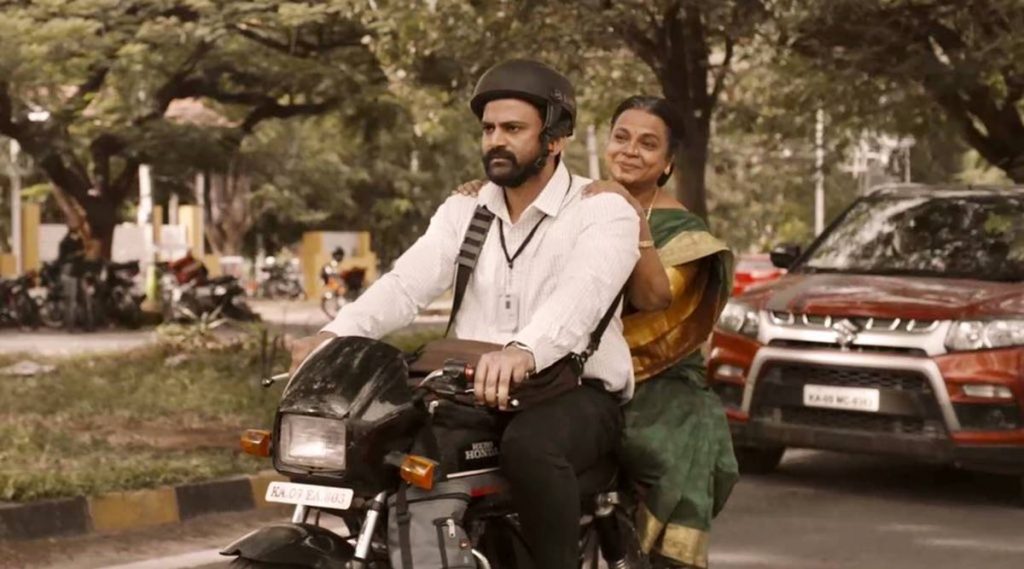 And within the first 30 minutes or so, Rathnan Prapancha tells pretty much everything it has to say in its entirety. Any sane person who sees the conflict of an adoptive parent and the search for the ‘real’ one – can decipher the insanely predictable plot. However, predictability in itself is not the biggest issue from this film. The issue is with how it tackles its core subject and how little it has to offer as a sort of philosophical insight into the phenomenon of relation.

Its paper-thin screenplay has nothing new or more to offer than its central premise. While I was certainly not privy to the film’s scripting stages, I assume that Rathnan Prapancha never saw a draft beyond its first one! The script is riddled with screenwriting issues, filled with numerous expositions that could have easily been told in a much more effective and efficient manner. I mean, why does a person need to elaborate every single point of every single dialogue to its basics as if it is serving no one but an audience of 5-year olds – who can not do away without the constant spoon-feeding?

Pardon me for the disrespect from my previous statement. I should not consider today’s 5-year old’s as naive who need to be told in a manner that this film does! If you think I’m being too harsh, let me share a few examples from this script. There is a dialogue between male and female romantic leads which occurs after ‘him’ doing something for ‘her’ out of possessiveness. The scene has clear signs of the motivations of this act being the same possessiveness. Yet right after the scene., the dialogue takes place overexplaining the situation to bang the drums of redundancy. And this is nothing but just a single example of a chain of similar overtly explanatory conversations.

Rathnan Prapancha does present a well-intentioned outlook on some aspects. It treads on the topics of gender construct and religion to plead for equality among all. But every single of the film’s appeal is so on-the-face that its intentions lose to ingenuity. Take an example of the female lead’s boyfriend who is shown as a relatively open-minded person with all the qualities that we would ideally look for as our progressive selves. The male lead’s biological sister follows the religion of her adoptive parent – and their relation between these siblings is shown in a positive light. But neither of these arcs have been developed enough to serve any purpose beyond their mere existence in the script.

Besides such conventional tropes, the entire journey-angle from the script or even the romantic elements are wasted for the most part. Rathnakar evolves from an annoyed crybaby to understand the meaning of dependence where his limiting mindset is challenged in certain instances. But this coming-of-age arc is also limited to the skeletons – without any necessary meat of deeper introspection.

As a result of all of this, Rathnan Prapancha remains to be nothing more than an earnest attempt that fails more than it wins.

Invasion (Season 1) Review: This sci-fi series about people of Earth reacting to an incoming alien invasion is a stifling bore