The Dog Who Wouldn’t Be Quiet by Ana Katz possess an atypicality that makes it immune to a hostile opinion. To an extent, it is even hard to have any opinion on it. Not because it is a tedious watch. For a feature-length film, it is only 73 minutes long. It is replete with appealing images and interesting ideas, and there is something mysterious going on throughout the film. All of this culminates in an inherent ability to engage. But then, a high number of things occupy the film that leads to an abrupt distribution of its runtime among each, compromising with its tonal coherence.

The Dog Who Wouldn’t Be Quiet is a character focus. It examines the life of Seba hustling through a range of diverse deterrents, experiencing and overcoming loneliness, loss, detachment, and an encounter with a quasi-apocalypse. Even though the narrative is character-centric, it is not an exploration of his inner turmoil and outer turbulence to minute details. Had that been the case, the screenplay would have been much more expansive than what is served, along with a greater degree of self-reflection on the part of the protagonist through monologues and/or dialogues for his character establishment and, then, development. In this case, however, Seba meanders from one life event to another, most of which are anomalous.

As the film begins, it appears to be about the relationship of a man with his dog. His insurmountable affection for his dog becomes evident when he accepts a job loss than abiding by his employer’s demand to not bring the dog to work. In a sequence of absurdity, his neighbours are found complaining to him about the noise his dog makes while the dog is not heard for once until his eventual demise in an accident that renders Seba alone. There is mourning in the undertones as Seba strives through scarcity into a different phase of life. He is shown to eventually find love, and work but the course of life takes a sharp turn when a celestial object hits the planet and (probably) depletes oxygen four feet above the ground, threatening life on Earth until things come back to normal. But the phase, during which normality isn’t restored and the struggle to survive is the new normal, highlights Seba’s familial life. Things get restored eventually, and the film closes to a much more stable Seba. 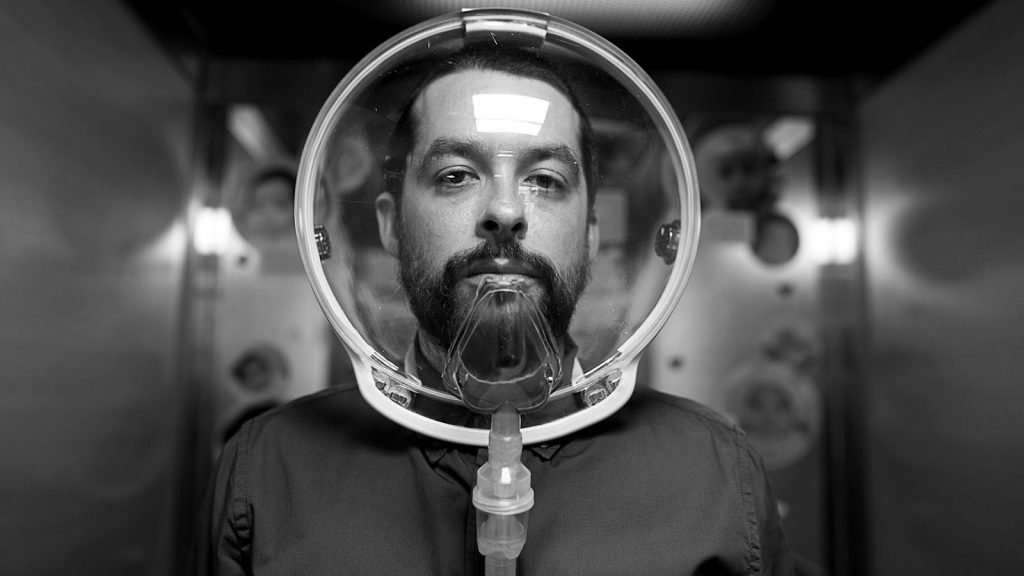 When I mentioned that the film is atypical, it was because I struggle to confine it to a certain genre. Defining it as a drama is merely taking refuge under a broader term. It has glimpses of family drama but at the same time, it is also science fiction in the language of cinema. Yes, it is an absurdist comedy but the absurdity only lies in the metaphors employed to express a few things and not in the things themselves. Tomorrow, if one was to make a drama film that is reliant on the outbreak of Covid-19 and the changes it thrust upon the lifestyle of its subjects, it would most likely be termed as a medical thriller. But it is a part of contemporary reality now, moving forward to become endemic and forever change how the world behaved, thought and progressed.

It is not a riddle to take the apocalyptic event in The Dog Who Wouldn’t Be Quiet as an exaggerated metaphor for the ongoing crisis the world is facing. And therefore, the question arises: can we really categorize this film as science fiction? This leads to a larger implication. Is the tonal incoherence of this film a conscious choice to subtly hint at the absurdity of life and our obsession with the need to define each aspect of it? Is it saying that with the health pandemic morphing the society into an unrecognizable form, definitions, attitudes and names are bound to change as well?

In other words, life never makes sense in an absolute manner, nor is each of its elements explainable. Life is incoherent. This fact is lost on us only because we attach faux causal links to occurrences in the present and expectations to occurrences in the future. Therefore, if cinema is but a reflection of life then its incoherence must be treated as a natural attribute. There is, perhaps, nothing anomalous when it comes to cinema.

The Dog Who Wouldn’t Be Quiet Official Trailer