We’re all on the brink of despair, all we can do is look each other in the face , keep each other company, joke a little. Don’t you agree?” 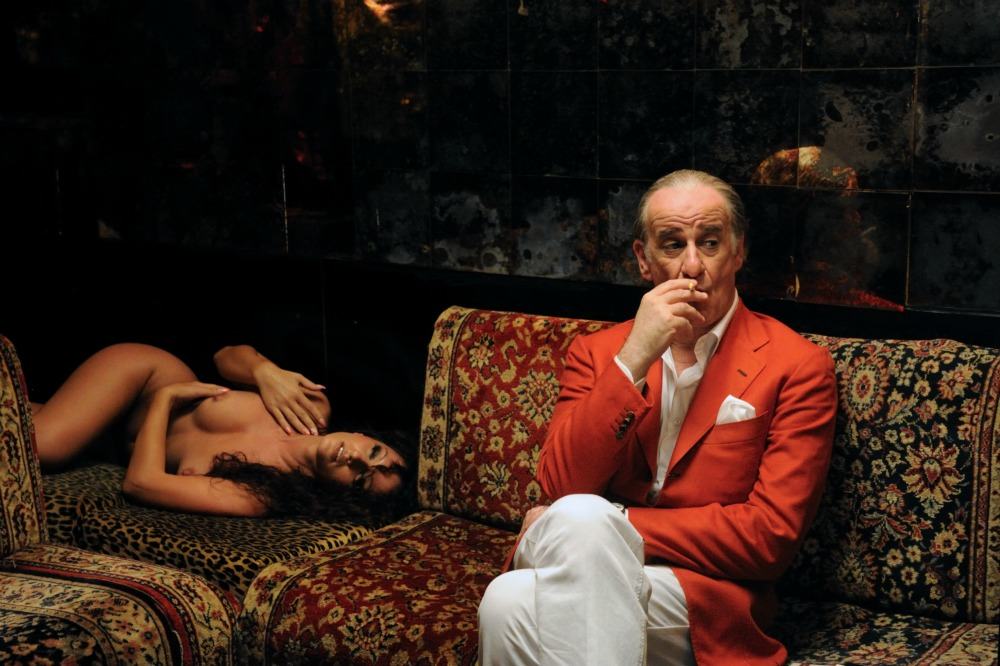 Riot of beguiling imagery that switches between past and present, gorgeous and grotesque, ‘The Great Beauty (La grande bellezza)‘ is a wondrous journey through Rome that is enthralling and creepy in equal measure. Paolo Sorrentino scrupulously tries to reinvent Federico Fellini’s La Dolce Vita with his immersive sense of direction that strips down the Rome to show superficiality and hollowness amidst its alluring visuals that are hard to take eyes off. The Great Beauty is a character study that presents contemporary Rome & complex perspective about life, that has Jep Gambardella at the vantage point. Though ‘The Great beauty’ uses Rome as a stage to show the shallow lives of urbane & elite class people, beneath the surface, film  addresses moral chaos and disorder, spiritual and emotional emptiness and existential crisis. The central character of the film ‘Jep Gambardella’ is played by Toni Servillo who has associated with Sorrentino in many of his films.

As the film opens, the camera slides and slues inside the debauchery party on the rooftop of Jep. Lecherous middle aged men are mingling with strippers and models, high life meets the low life, writers and thinkers dance berserkly oblivious of people around them. Jep walks in to the party with elan as if he owns the Rome city; he wildly kisses a model and lights the smoke, and plunges into the thought about his life span that snaps into gloom. While Jep has been shown struggling to find the peace and keep melancholy at distance, he finally finds the peace in his loneliness when he transcends himself above superficiality, dreaming about his lost love, away from all the maddening crowd and debauchery, that has confined his life rather than define it. Just to flesh out Jep’s life, these two contradictory scenes perhaps sums up the entire life of Jep. 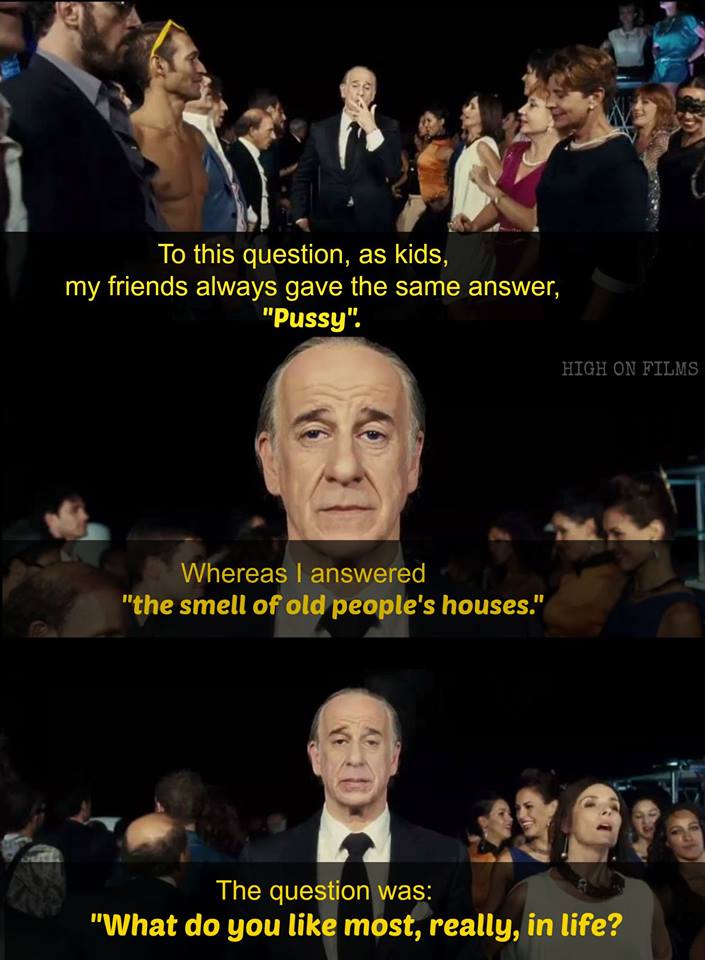 Jep is the suave journalist, whose first and the last obscure novel rendered him the position in the elite class. Jep is quite witty ,articulate and a smart person, and mocks anyone who makes vague, pseudo-intellectual claims about life, social behavior and ethics. Jep’s realization about his (non)achievements in the life gives him a wake up call. Jep has reached a point in his life when he begins to mourn over lost love and missed opportunities. Jep palpates reflection of himself in  everything that’s provincial and ugly about Rome. Jep wanders around the city of Rome and meets every person while he can. Every person makes him more wiser and self aware about his own life  without them realizing it.  ‘You’ve changed,’ says his newspaper editor for whom he mainly interviews artists. ‘You’re always thinking,’ she adds. Does this change is any good for Jep ? Jep sees a hope when he encounters  Ramona (Sabrina Ferilli), the daughter of his old pal, who is a stripper at her ripe age. He takes her to high society parties , but soon realizes she is a fake like everyone else in the city. 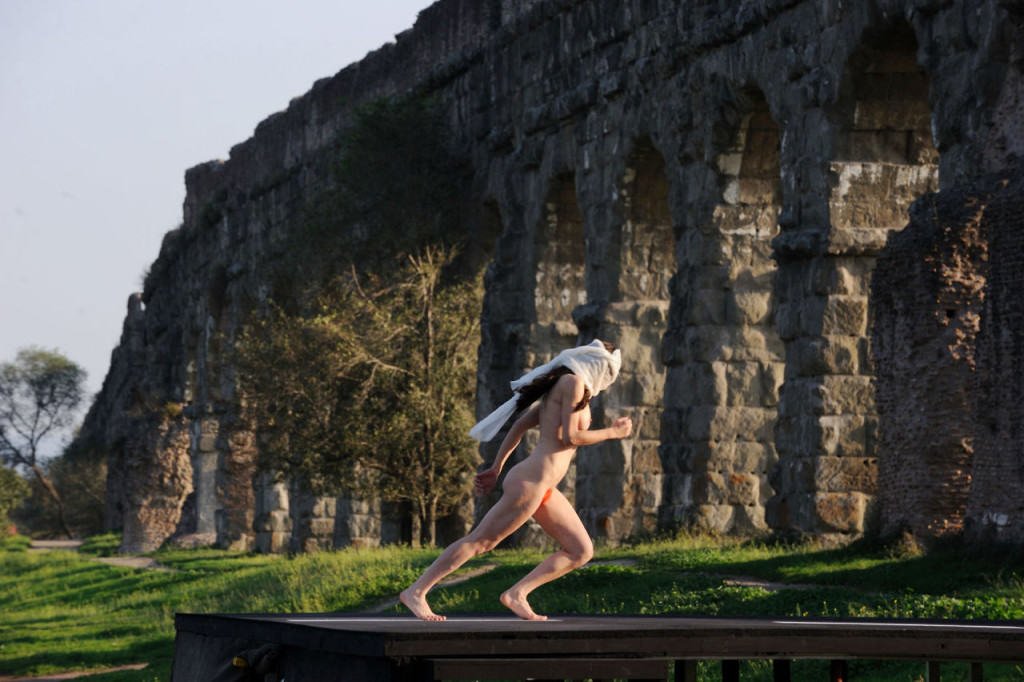 The Great beauty also depicts some grotesques scenes that might creep through you, but they have been done with such sensitivity and elegance that you absorb its absurdity. Like the scene of a naked girl who runs towards a Roman monument and bashes her head in a senseless piece of performance art. Or the scene where a child painter is forced by her parents to perform her art, where she throws the color everywhere in the fit of rage. But then, this art form reflects one dimension of the Rome city. 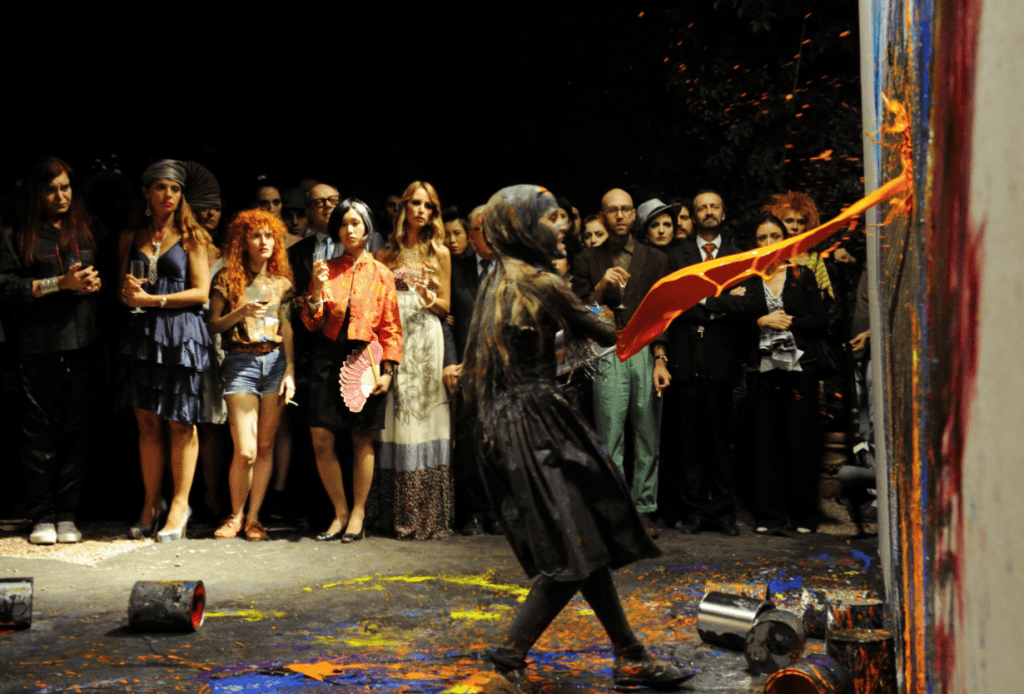 While ‘The Great Beauty’ is vastly a pungent satire drama glaring at the trivial way of living a life , it manages to show the beauty of Rome city that gives more depth to the horrific picture of life of these city dwellers.  D.P. Luca Bigazzi plays a major part in the creating the film’s distinctive look that starkly differentiates the chaos and peace. Adding a key element to Sorrentino’s world is his exceptional use of music, “an inevitable mix of the sacred and the profane, just as Rome famously is,” the director says, which specifically means modern music by composers like Henryk Gorecki and David Lang combined with Italian pop anthems.