Home»Reviews»Films This Week»The Matrix Resurrections [2021] Review – A Romantic Heist Film That Has a lot to say about Nostalgia, Freedom and Choice
Films This Week/Reviews

Every single person who has grown up or honestly engaged with The Matrix franchise views it in unique and different ways. Some think that The Matrix (1999) is the best movie of all time and Reloaded (2003) and Revolutions (2003) are utter garbage. Some think that the first three Matrix movies are great sequels and build on each other in meaningful ways. Some love them for their action sequences. Some think that the action sequences are overrated. Some abhor the movies’ heady commentary on choice, freedom, and love. Some love their action with a healthy serving of the verbose exposition on the side. And there are some who just hate the franchise as a whole. The Matrix: Resurrections (2021) talks about all that (yes, seriously, all of that) and more. So, buckle your seatbelt Dorothy, ’cause Kansas is going bye-bye!

The Matrix Resurrections is directed by Lana Wachowski and written by Wachowski, David Mitchell, and Aleksandar Hemon. It’s set a few years after the events of Revolutions and follows Thomas Anderson (Keanu Reeves) who is living his life as a game developer. And he hasn’t designed just any game. He has designed The Matrix trilogy as a game. While working on a new game called Binary, he’s forced to divert his attention towards a fourth Matrix game. That’s when he gets triggered and faces a lot of difficulties separating his reality from fiction. His therapist, played by Neil Patrick Harris, tries to stabilise him but things only get worse. Meanwhile, a rebellious group of humans led by Bugs (Jessica Henwick) make their way into the Matrix (the virtual reality or the construct) to find out what’s actually happening there.

Another important thing that should be noted is that this movie comes after Warner Bros. (WB) persuaded the Wachowskis to make a sequel to The Matrix for ages. When the directors didn’t oblige, WB almost went forward with a reboot/spin-off starring Michael B. Jordan and written by Zak Penn. That’s when Lana decided to take the reins of the next project in the franchise into her hands while Lilly chose to stay out of it. 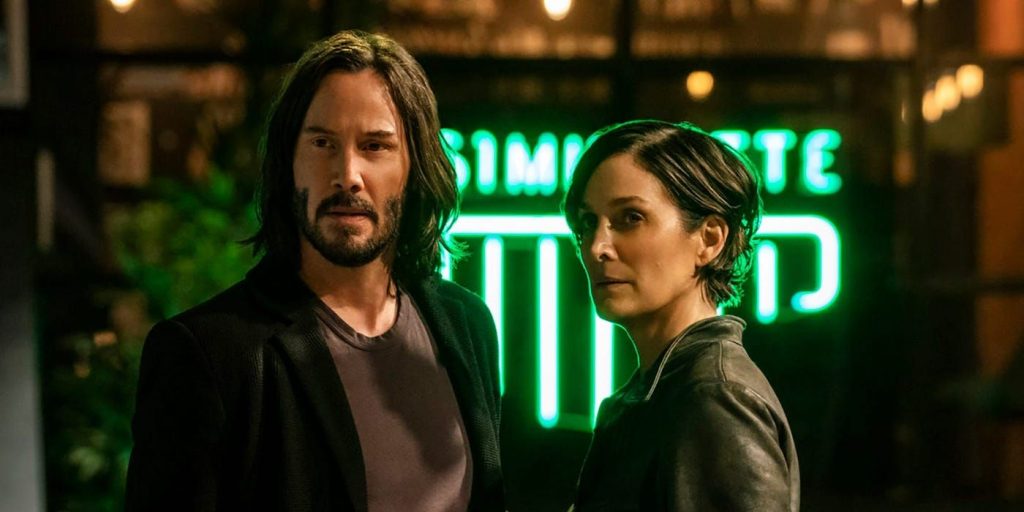 To put it simply and without giving away too much, The Matrix: Resurrections is a movie about two heists, one which is motivated by freedom, while the other is motivated by love. Sandwiched between these two heists is a heady commentary about freedom, nostalgia, love, and how we should fight to find the balance between all of this instead of getting overwhelmed and giving it into the hands of those who do not value any of it. Amidst all of this, there’s a lot of kung-fu, gunplay, car chases, foot chases, and telekinetic explosions courtesy of Neo. And there’s a lot of exposition to not only bridge the gap between Revolutions and Resurrections but also make sense of a lot of the plot points. Out of all the aforementioned things, the dialogue might seem clunky at times. But as soon as you join the characters in solving the mystery (as they are as much in the dark as you are) and go deeper and deeper into the rabbit hole, it flows smoothly.

Lana, David, and Aleksandar’s exploration of nostalgia to cope with anxiety and its misuse to keep the masses in some kind of a saccharine loop is the most relevant. Building on the aforementioned point about Warner Bros. almost forcing the Wachowskis to make a sequel, Resurrections goes meta to show how our love for practically anything has become an asset. And that if it’s tweaked and repackaged in the right way, we will gobble it right up without questioning whether said tweaking and repackaging is ethical. Additionally, the movie speaks about resurrecting real-life stories e.g. biographies about real-life people in various ways because they’ve sentiments attached to them. There’s no need to question whether the author of those stories wanted them to be in the limelight anymore. If the people need it, the system will give it to them in the barest minimum format so that the wheels keep turning and the lights stay on.

The first three Matrix movies had freedom as its focal point and how it’s all an illusion. Yes, choosing the blue pill meant staying under the control of the Machines. Choosing the red pill meant getting yanked out of the Matrix. But the very binary nature of that choice meant that it wasn’t a choice at all. Resurrections try to understand whether there is anything beyond binary options. Do we have to completely submit to the Machines in order to enjoy the Matrix (because there are some perks to it, especially due to the mortal nature of humankind)? Do we have to be happy with the concept of freedom from the Matrix and then live in misery and constant fear that the Machines will overtake us one day? Is there no way to co-exist? Because if we don’t try to find a way to look beyond binaries, someone far less compassionate than us will cash in on our indecisiveness for their benefit (which in more ways than one harks back to the Wachowskis’ deal with Warner Bros. over a Matrix sequel).

Related to The Matrix Resurrection: The 6 Stages of Keanu Reeve’s Career making him an urban legend icon

But let’s say there is an option to co-exist. An option to have nostalgia, freedom, and choice without completely destroying the system. If there is indeed an option that isn’t binary in nature, what should we arm ourselves with to achieve it? Because anything that resembles a solution to something as profitable as submissiveness is going to be in the fine print. The system will never want you to find it because then you won’t need the system. It’ll fight back and it’ll fight back hard. So, what are you going to use to fuel yourself in that uphill battle without giving in to the system’s tricks to make you relinquish your control? Well, according to The Matrix: Resurrections, it’s love. Anger, vengeance, and every kind of brute force is non-renewable in nature and will perish on the long journey to reclaiming your agency. Love isn’t. In Neo’s case, it’s his love for Trinity (Carrie-Anne Moss). However, in your case, it can be anything (ranging from yourself to your art) and not necessarily a heterosexual love interest. It has to be genuine enough to cut through the noise fed into your head by the system, clouding your ability to love and be loved. And then and only then will you be able to not only arrive on the plains of co-existence but live there in peace as well.

If you think that’s all there is to be deciphered from the script, you’re wrong. That is probably me barely skimming the surface of the thousands of layers that The Matrix: Resurrections is made of. But we need to talk about the other aspects of the movie as well. So, moving on.

The performances in Resurrections are fantastic. Keanu Reeves gets to really dig deep into Neo. Carrie-Anne Moss gets to unpack a lot of things about Trinity. Jonathan Groff is deliciously awesome. Neil Patrick Harris is surprisingly menacing. Jessica Henwick is actually the star of the film. Yahya Abdul-Mateen II is quite funny and charming. Priyanka Chopra Jonas is delightful. Jada Pinkett Smith gets to show another side of Niobe despite being limited by her makeup. Eréndira Ibarra as Lexy, Max Riemet as Shepherd, Brian J. Smith as Berg, Toby Onwumere as Sequoia, and the rest of the actors in Bugs’s crew play their parts diligently, with some even voicing the audience’s love for Neo. While Priyanka is the most popular Indian actor on the roster, fans of Hindi cinema will certainly be happy to see Purab Kohli cameo-ing as one of the minds between Matrix 4, the game. He shows up in a post-credit scene as well. So, don’t forget to stick around till the end. Also, please forgive the overall vagueness here and lack of information on each of the characters because it’s all spoiler-y in nature.

Lana Wachowski, cinematographers Daniele Massaccesi and John Toll, production designers Hugh Bateup, supervising art directors Stephan O. Gessler and Maya Shimoguchi, set decorators Lisa Brennan and Barbara Munch, and the VFX teams deserve the biggest round of applause for crafting one of the best-looking blockbusters of the past decade. Without naming any names, it almost seems that we’ve been programmed by certain production houses to welcome dull, grey, muddy, boring and fake-looking movies as the norm. You’ll look at the budget of the products coming out of those billion-dollar franchises and wonder where did the money go? In Resurrections, that’s not at all the case. Every cent is visible on-screen. Every frame looks dynamic. Every set is brimming with detail. And even though the action isn’t exactly like the first three movies (probably very intentionally because Lana is critiquing the very act of regurgitating nostalgia for cheers and bucks), it’s adrenaline-pumping, with the fight between Neo and Smith acting as the crown jewel. Joseph Jett Sally’s editing is haunting, juxtaposing shots from the originals with the scenes in Resurrections in meaningful but non-masturbatory ways. Composers Johnny Klimek and Tom Tykwer use some of Don Davis’s motifs, but their score is masterful in its own right with a central theme that’ll undeniably lodge into your psyche permanently.

In conclusion, The Matrix Resurrections is one of the best movies of the year. It’s a satisfying return to the franchise. It’s yet another classic from the Wachowski household. And you should definitely watch it with an open mind in the theatre (if it’s safe, of course) which has the biggest screen and best sound.

Confused after watching The Matrix Resurrections? Click Here to Read our detailed explainer

Hawkeye [2021] Review: No exclusive Swansong, but Clint Barton's Story Gets a Fitting End