The Patient (Episode 6), Recap & Ending Explained: The Patient’s newest episode brings further impressive dramatic work from Steve Carell and Domnhall Gleeson. Both the actors seem tailor-made for their roles and carry the story well on their shoulders. The Patient is gradually beginning to live up to its billing as the suspense builds up. Newer avenues and directions for the report are opening up, increasing our anticipation of what might come next. This episode is titled “Charlie,” hinting at an important figure from either person’s past. We answer all your questions about episode 6 of FX’s The Patient in this article, along with an explainer for the ending.

It is a beautiful day with the sun piercing the clear blue skies. The sound of birds chirping fills the outside of Sam’s isolated house with a sense of optimism. That is until he returns from the hardware store with stuff to bury Elias’ dead body. Candace puts up a weak-willed effort to reprimand him for what he did. “I am at my wit’s end here, Sam,” she quips, saying she “almost called 911” last night. An empty “sorry” is all that Sam can say to her. For them, it is a typical mother-son dynamic where they both fiercely protect each other. The toxicity in their relationship only exists from a third person’s point of view. I have a feeling this will last long enough.

Sam brings a sledgehammer, drill machine, and a shovel to dig a grave for Elias’ body. All this while his dead remains lie in the same room where Alan tries his best to avoid its sight by turning his back and closing his eyes tightly, almost as if it will magically make it disappear. Just as he did in the last episode, Alan has recurring flashes of the nightmarish previous night. Sam ruthlessly took the life out of Elias, grasping his neck like a newborn babe does her mother’s umbilical cord. As Sam tears away the floor of his house to hide this unspeakable sin from the outside world, Alan slurps a drink of water to transport himself to his own safe space. 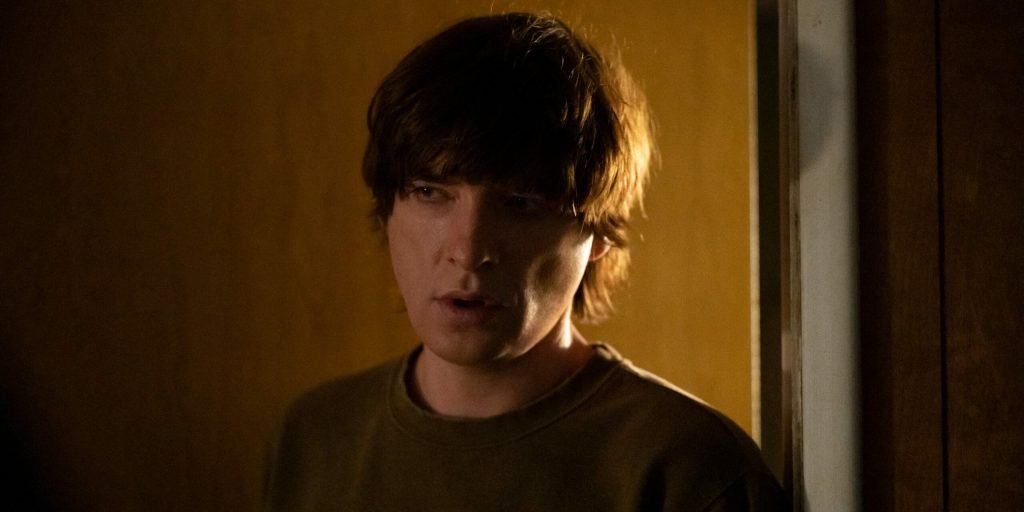 In this place, he sits across from Charlie, who probably seems to be someone like him – a therapist. He might be a colleague, his professor from college, or a dear friend. We do not have details yet. But it is still early. From Charlie’s reactions, it is not the first time Alan has come to him. A previous “emergency” too had brought Alan to Charli. But it could not have possibly been this bad, could it? One of our observations from the last episode that we gleaned from Alan and Elias’ conversation was that the therapist was trying to make appearances with Sam. His life mattered the most to Alan, as it should in real life. Cinema and television would have you believe otherwise, though.

Alan admits this to Charlie. He tries his best to sound “normal” and “in control” of the sociopath because he fears if he sees him “like this,” he will dig a grave for him too. Sam’s drilling in the other room invokes tremors in the therapist, but Charlie tries to calm him down. He concedes to not having “a plan,” something that is quite visible in his interactions with Sam. If he probably did a better job with him, maybe Sam could have been stopped. But can you blame Alan for not being “professional enough” in these circumstances? Alan reveals that he thinks there might be a conscience somewhere, giving him hope that he could be helped. Charlie says if there is a conscience, there is empathy on some level. Alan says he has never started at absolute zero with someone like Sam, saying the inspector is the one in charge and it will be difficult. He hadn’t dealt with a sociopath before, even though he admittedly was starting to form a connection with him.

It is not entirely clear what Alan wants. It is as if his two parts – the scared human being and the excited professional – are fighting a duel. Each has the cake over the other on a few occasions but cannot conclusively decide what is best. Charlie disappears for the time being as Sam stays put on the job. Sam’s hands start aching as he cannot hold the shovel anymore. Begrudgingly, he walks up to Alan with the shovel in his hand and asks him to “do his part.” Alan remembers talking to Colleen, one of his patients, about Beth’s funeral and how it had more singing than usual.

Sam mockingly thanks Alan for “not” helping him resist his temptations. From what it seems, Alan finds himself amidst a slew of Jews wearing the uniform the Nazis gave them in concentration camps. Weren’t they also made to do the same? Dig their own grave and then bury in them? His mind is rummaging through all possibilities; anything can happen to him. Is his deathbed nearby? Is Sam willing to part with his last hope alive at the risk of never being able to feel normal again? Maybe this is “the normal” for him.

The chains finally come off Alan’s feet but not for the end he would have hoped they would. More flashes follow; Ezra, beaming light in a shut-off room, and the preying limbo of nothingness. The chains are back on as Sam puts them onto a pipe in the room where he is digging. Alan is handed over the shovel and starts digging. Sam leaves in his truck as Alan keeps toiling away. By doing this menial job, Alan faces his failures as a father and to an extent, his shortcomings in being able to understand himself better. While walking with what seems like a colleague from the university, he admits that he is afraid to go in front of a crowd of students and requests her to take over.

How does Alan recalibrate his escape plan?

Charlie is back, and Alan helps us identify him. He is Alan’s dead therapist. By communicating with him in this way, Alan deduces that he is disassociating. Among other things, he does not have a legible family lineage and has been kidnapped with no hope of getting out alive. Charlie notices Alan looking over at the pitcher continuously, to which Alan says he wishes to hit Sam with that in the head. But he laments his lack of strength and being on the wrong side of his old age. If Sam does not kill him, his arrhythmia will; he does not have his pills anymore. Or maybe even foot fungus. Charlie warns Alan to see that Candace was herself responsible for Sam’s abuse as a child and to bear in mind this fact in the next session. Sam is back and takes over from Alan. He has got him some delicious food – as he does every night – and escorts him back out. Elias is still lying there, by the way.

They begin having dinner. Just as Sam starts going away to mix the cement, Alan seats him down. He offers an alternative possibility to deal with the body. To do the minor human thing, he could leave his body where it could be found. Sam protests the idea, saying Elias might be traced back to him. They argue the same, and Alan seems to give explicit ideas about not burying him in the house. “Therapy isn’t like an exorcism. I cannot suck out this feeling from you”, Alan says. To get better, Sam must think of Elias’ relatives right now; have some empathy for his worried family. They should at least get the chance to grieve for him. To stimulate an empathetic reaction, Alan asks Sam to cut off Elias’ blinds to make his face visible. Alan’s heart sinks as the tape comes off. Sam asks why and the therapist is too speechless to say anything for a while. He tries to remind Sam that Elias is human and that his parents will miss him. Candace would if Sam was dead.

Alan describes Jewish funeral traditions, including explaining the shiva and the Kaddish. The more important thing here is not the ritual but the consideration of subrogating himself in Elias’ shoes. Sam agrees with the suggestion. He takes a positive step and asks Alan to help him fill up the hole he dug. As Sam uses the restroom, Alan uses the opportunity to write a secret note and stuffs it down Elias’s mouth using a pen. In a moment of panic, some of its ink stains Alan’s hand, and he hurriedly tries to rub it off. When Sam enquires, Alan feigns being overwhelmed by everything that has transpired. Sam opens a sheet and wraps Elias’ body in it. The suspense here is; will Elias’s mouth open, and Sam discover the note? For the time being, Alan is in the clear. One of Beth’s songs plays in Alan’s head as he sees a hopeful future ahead.

Where to watch The Patient